A sentient snack vending machine continues to do a better job romancing the ladies than you might think. 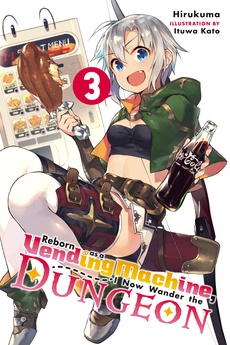 This volume focuses less on the mechanics of Boxxo’s existence as a vending machine, and more on developing the supporting cast. On the face of it, this is good; how many times do we need to find out that Boxxo added a new kind of corn soup to his products? Do we really need to know how many points Boxxo has accumulated at any given moment? Probably not.

However, I think this series is meant for a particular type of reader, and we’re the kind who enjoy this kind of minutia. I’m the kind of person who actually enjoys organizing (and re-organizing) long lists of items in RPGs, and that’s part of the reason why the extremely detail-heavy nature of the first two books appealed to me. Several times during this volume I found myself asking “How many points did Boxxo just spend to do that?”, something I’ve never had to wonder with this series before. One of the things that made the series initially compelling is the fact that Boxxo’s point total is effectively his life; if he runs out of points, he stops operating, essentially death for a vending machine. I think you need to really care about how many points Boxxo has left in order to be fully invested in the story, and that’s something that doesn’t work as well when the narrative starts glossing over the numbers.

Regardless of whether other readers get hung up on the lack of detail (maybe it’s just me being obsessive compulsive?), this volume does benefit from the greatest strength of this series: the fact that, as a vending machine, Boxxo’s solutions to problems are never what you would expect from a more typical hero. His use of different vending machine functions is a little less creative here than earlier, but it’s still interesting to see him utilize the benefits of practically every single kind of vending machine created by humanity. This time around, he even starts functioning as a jukebox, which seems like a bit of a stretch to me– that’s a different kind of machine, right?– but I’ll allow it.

This volume does continue the narrative of Boxxo’s party’s struggle against the mysterious dungeon bosses, but most of it is spent on downtime with the ladies in Boxxo’s life: particularly Lammis, the mighty but surprisingly timid adventurer who carries Boxxo on her back, and Shui, an archer with a bottomless pit for a stomach and a heart of gold. The focus on Shui was somewhat surprising (in fact, I barely remembered that she existed before this volume), but not unwelcome, and an eating contest is certainly tailored toward the strengths of this series. I’m hoping we’ll eventually get more background on Director Bear, the trustworthy public servant who happens to be a grizzly bear, but I guess I’ll have to wait for another volume for that. There are some fanservice scenes (which illustrator Ituwa Kato appears to have some fun with), but they’re pretty mild altogether.

My one big complaint about this volume (and this series in general) is the fact that the main character feels the need to remind the reader that he’s a vending machine waaaaaay too often. Dude, the premise of your series is unique, it’s not like any of us are going to forget anytime soon, you know?

In Summary:
A more character-driven installment that tones down on the “gamey-ness” of previous volumes, which can be either a good thing or a bad thing depending on how much you liked the focus on vending machine stats earlier on. It still reads like a breath of fresh air compared to more formulaic series. Also, don’t read this book when you’re hungry: just don’t. You’ll probably end up demolishing an all-you-can-eat buffet, but if you planned on doing that anyway? Full speed ahead.