The OCD part of me is annoyed that I’m starting off here with Episode 13 of this season. Plus, I only blogged part of The Second Plate back in the day, so really, to appease the OCD Gods, I should go back and blog every episode, starting with the first season. However, I’m going to choose to believe– despite a complete lack of evidence to the contrary– that my time is too valuable for that. 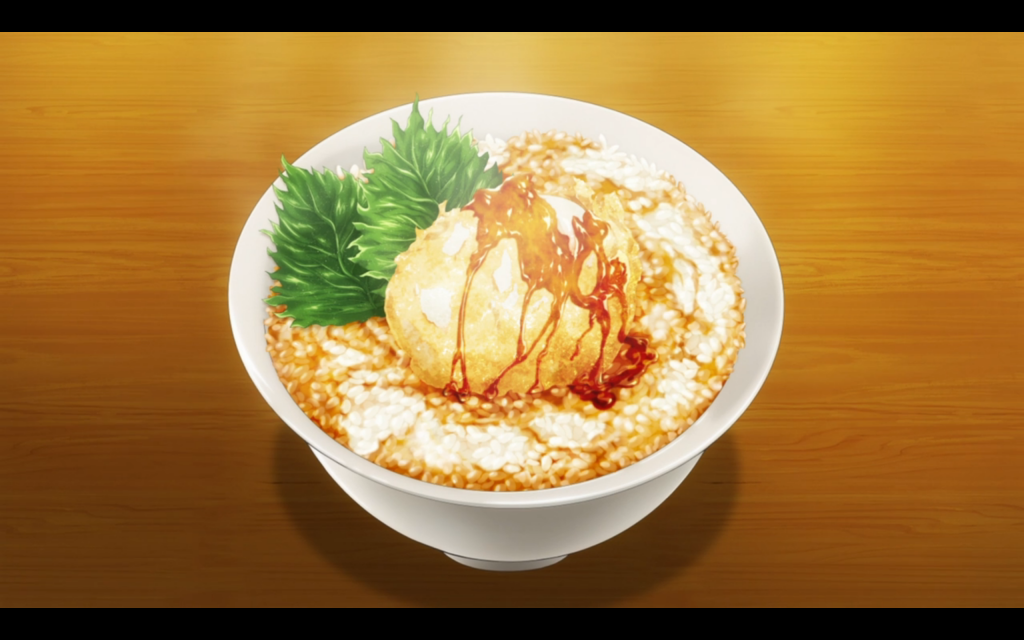 Actually, to go back to the political aspect, I do kind of get it. The original model of Totsuki Academy functioned as an extreme meritocracy, where only cooking quality mattered and anyone who couldn’t cook to a certain level on their own was immediately expelled. So, kind of an extreme capitalist model, the kind of thing that would give Ayn Rand the warm fuzzies. Nakiri Azami, main girl Erina’s evil-ish daddy, wants to change the system to something more forgiving of failure, but also incredibly authoritarian and anti-creativity. So it’s a pretty classic political struggle, and I suspect we’ll eventually end up somewhere in the middle, since the original Totsuki “one mistake and you’re GONE” model was pretty cruel. It makes sense to me, but I think asking why Food Wars! felt the need to get political in the first place is a valid question; it feels a little pompous. 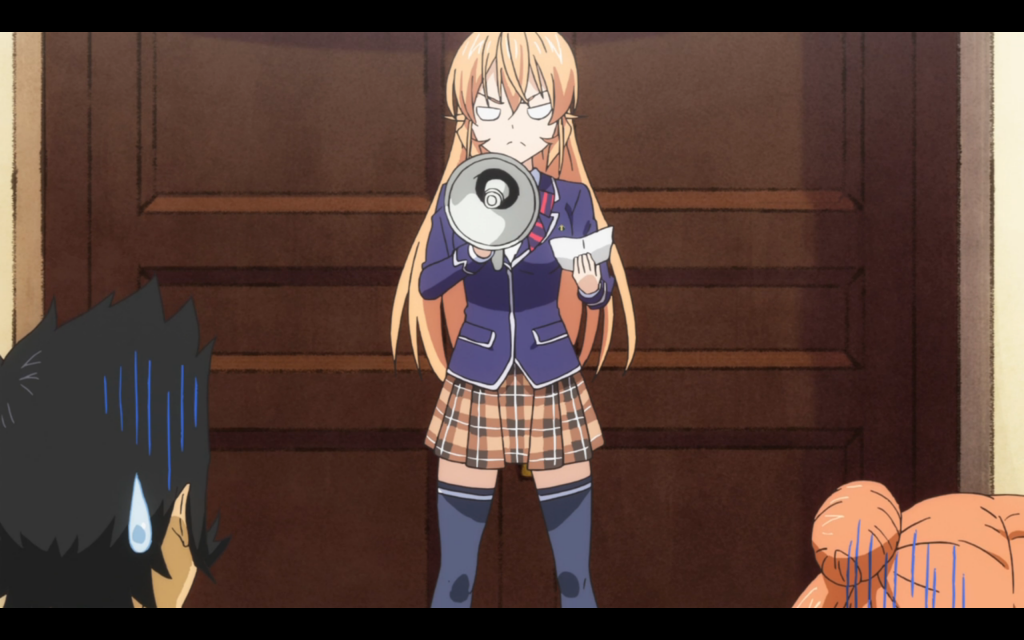 “ATTENTION: No authoritarianism allowed at this cooking school anymore! Now all of you do as the God Tongue tells you! Fresh, seasonal ingredients good, communism BAD!”

Oh and also, Nakiri Azami apparently wants to destroy every restaurant in the world (or at least Japan) that doesn’t feature white-tablecloth fine dining. How many economics classes do they have at Totsuki Academy? Clearly, not even one, or Azami might notice all 14 million practical problems with this approach. Erina’s mom must have been the brains in this family.

Speaking of Erina, this is really her episode, giving us insight into what it’s like to grow up as the girl with a world-famous palette called “the God Tongue.” First, since she’s been working as a culinary consultant since she was barely out of diapers, she’s essentially had her childhood stolen from her. Second, having hyper-sensitive taste buds has got to suck when every upstart chef wants you to taste their edgy new fusion dish, possibly with sheep offal. Third, a brief encounter with Soma’s dad changed her life, because for one meal, she was able to enjoy food just as a diner, and not as a judge.

The relationship between Erina and Soma’s dad has been hinted at before, but it’s kind of surprising how limited it actually was; it seems like she was only in his company for a few hours, once. The way the show has been foreshadowing it, I thought he had been clandestinely tutoring her for years or something. Nevertheless, her connection to his father strengthens the bond between Soma and Erina, which gives Erina the courage to do something she’s always been terrified to do: stand up to her insanely domineering father.

I don’t think anyone looks to Food Wars! for great character development, but this has been a solid arc for Erina and it’s satisfying to see her fully emerge as one of the good guys, after playing sometimes-antagonist to Soma and friends for so long. Now Erina is going to be helping the Polar Star kids pass an Advancement Exam, where the judges are going to be gunning for them because they’re rebels who openly disapprove of her father’s agenda.

I’m curious how this is going to play out. It could be a simple as Erina using her experience and palette to help coach her dormmates to make food so delicious that the judges can’t eliminate them in good conscience, but I kind of hope they go another way: that she starts throwing her weight around as The God Tongue.

Like, imagine the judges are trying to evict Megumi, and they say her Salmon en Croute tastes “bland and uninspiring,” then Erina walks in with her entourage, tastes Megumi’s dish and says “ACTUALLY I think this is some delicious salmon, and I’m the God Tongue; go fuck yourselves.” Then the judges go off to a corner to cry and Megumi slowly backs out of the room, wondering what just happened. 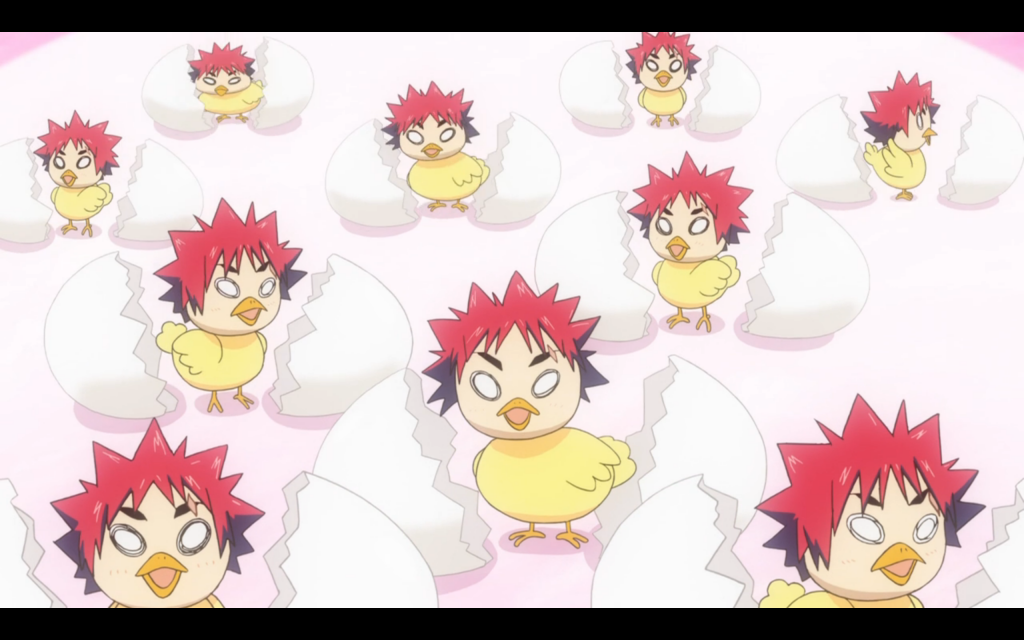 Except only the highest quality, Grade A eggs with spiky red hair and an attitude problem.

This episode also features what may be my favorite Foodgasm thus far: Erina being assaulted by tiny chicks who all look like Soma. He feeds her an innovative egg-over-rice dish, and her resistance to calling it delicious is countered by a million tiny Soma-chickens who nibble on her extremities, or something. I want the Soma mini-chickens to be the new norm for foodgasm scenes, even if he’s making something totally unrelated; diners takes a bite of Soma’s chocolate pudding, suddenly they hallucinate a flock of Soma mini-chickens poking their belly buttons, because why not?

So yes, a fun episode with fun food that manages to work pretty well despite my lack of engagement in the larger plot. If the show keeps this up, maybe I’ll keep covering it weekly for the whole thing, and not getting distracted halfway through like I did with the second season.