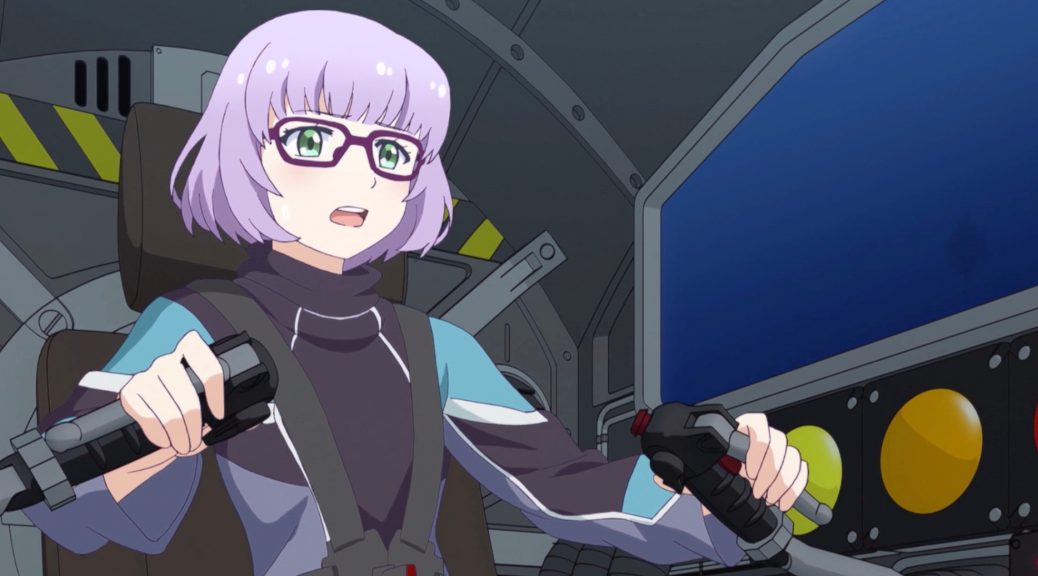 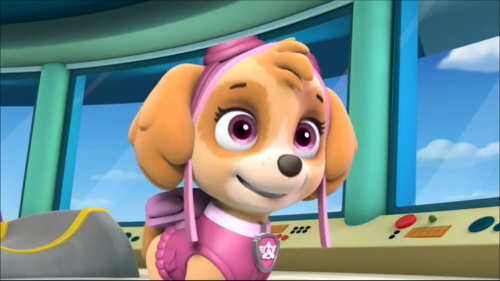 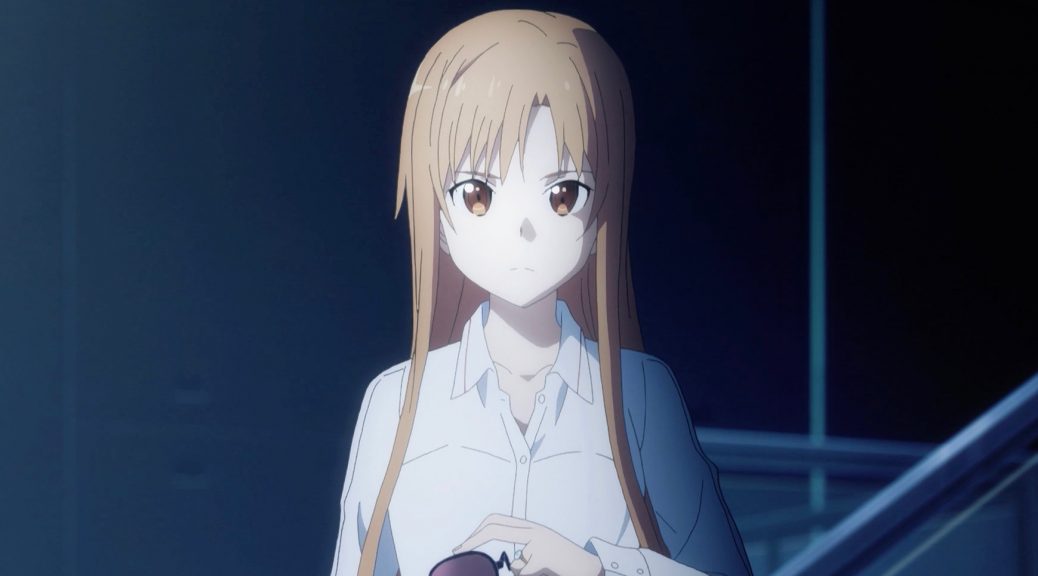 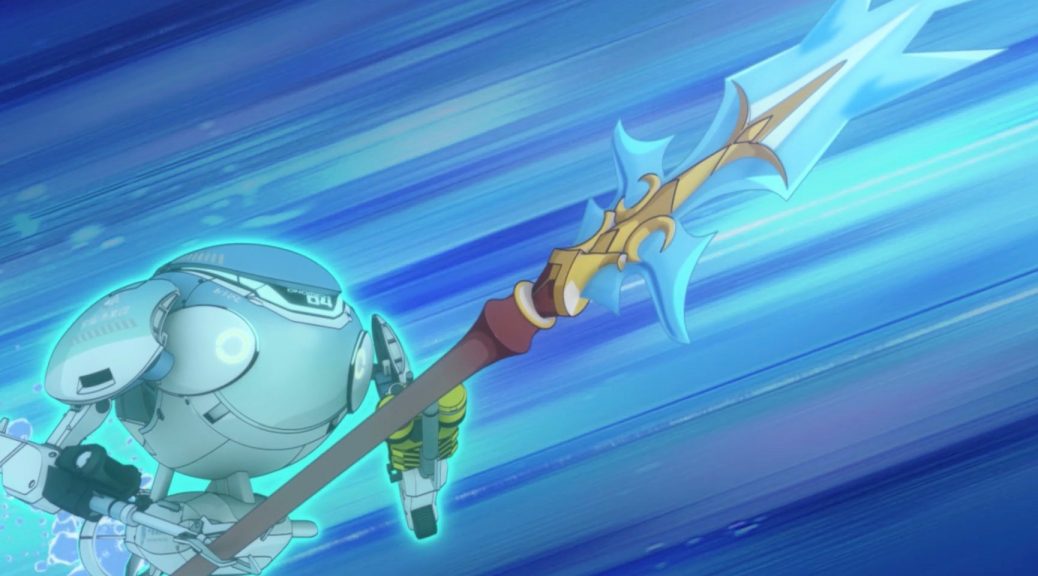 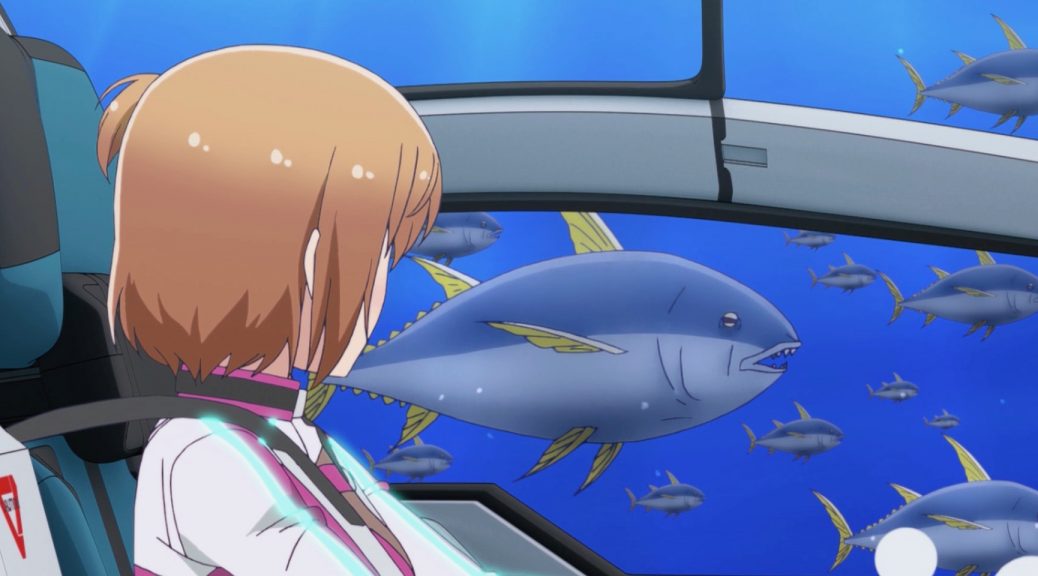 So, let me see if I understand the premise here. There are no fish in the oceans left on Earth, so the Japanese made giant water balls full of fish in space so they can still have fish for sushi. In addition to having the technology to somehow create these giant space aquariums, they’re also capable of going back and forth from space via rocket whenever they want. So far, it seems like we’re dealing with a pretty high level of technological achievement here, right? Go, future Japan!

Unfortunately, deity-enhanced-vehicular-fish-homicide is a man’s world, meant for manly men who don’t think twice about punching a Beluga whale in the face with a magical truncheon. Now a bunch of young girls, featuring lots of pluck and significant cleavage, want to prove that they can fuck up space fish just as well as any man, thank you very much. Except how can they prove their mettle in pitched tuna-to-mech combat when the completely untrained Haru hasn’t even installed the God app on her cell phone, and giant, bellicose crustaceans are on hand to crush the women’s empowerment movement ONCE AGAIN?

Jesus Christ, this show is ludicrous. From the beginning, I thought this might be a semi-serious sci-fi series, albeit a very optimistic one. Then we got to summoning Gods with your phone and I had no idea what this show even was anymore.

It’s pretty clear that we’re supposed to be feeling righteous indignation over the way the male fisherman treat the female cadets, but the old-fashioned sexism just seems so out of place in this setting. You mean, in a world where they have space travel, enabled by female mathematicians, and they still don’t realize that women can perform traditionally male jobs? Or does this anime take place in an alternate universe where women have done nothing but cook and have babies for the entirety of human history, but they somehow have The Jetsons-level technology anyway? If that’s the premise, in some ways that’s even more bizarre than the whole space fishing thing.

I can’t deny that this episode was entertaining, but mostly because I couldn’t believe the logic of what was supposed to be happening. The main character’s cluelessness annoyed me; I understand how that kind of character can be charming if handled properly, but her excessive ditziness just made me think that she really isn’t cut out for space fishing. The other characters didn’t make much of an impression, except for the female teacher, who just seemed overexcitable and unprofessional. Based on the way the female characters act, it’s almost like the men are right to assume that they can’t do an actual job.

Is it wrong if I watch this show rooting for the girls to fail, and hoping that the sexist oaf fishermen dudes end up being right about everything? Okay, I know that’s not how this works and the girls are going to end up being the very best space fishermen ever by the end of it, but wouldn’t it be kind of hilarious if it didn’t work out that way? Like, in episode 12, Haru was just like “Wow, space fishing is really hard if you’re a girl! My feminine little hands can’t even grasp the controls! I think I’ll just go back home and marry my cousin, that sounds easier.”

So yeah, I’m watching this show in the hopes that everyone fails miserably in their goals. This is usually called hate-watching, but you can’t hate a show where people fight space fish using magical spears; you just can’t. There is nothing hateful or hatable about this show, it’s just really bizarre that it exists and the fact that it’s based on a cell phone game doesn’t seem like a good enough reason for said existence. I will admit that the underwater environments are rather pretty, and that’s going to be my excuse for the 3-4 hours of my life that I will now waste on this series. 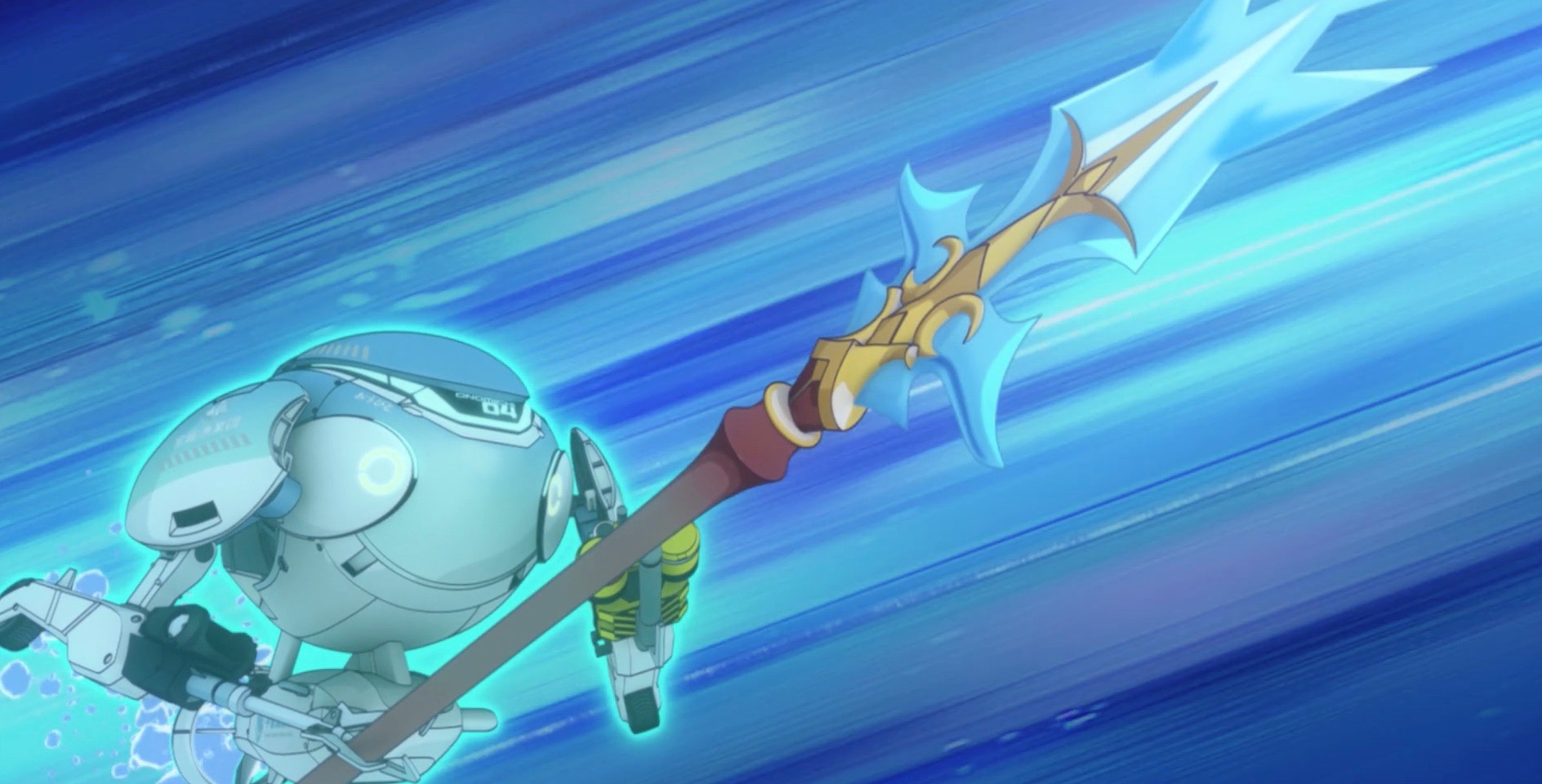 One thing I love about anime is that every time you think Japan has run out of ideas and is in a slump, something comes along to completely shatter that perception. In this series about grrl power, a group of young girls aim to go into space so that they can become space fisherwomen despite the odds stacked against them.

Right away, this series sets up the story and the challenges/sexism that these girls are going to face throughout the entire run of the series and it works. Within fifteen minutes I was cheering for these girls to show the boys what-for and give them a good space fishing whupping. Sadly, that doesn’t happen in this episode but I am absolutely dead set on watching these girls do their best to make the boys eat their words.

If the first episode is any indication, this is going to be a very fun series to watch this season and I can’t wait to see more! 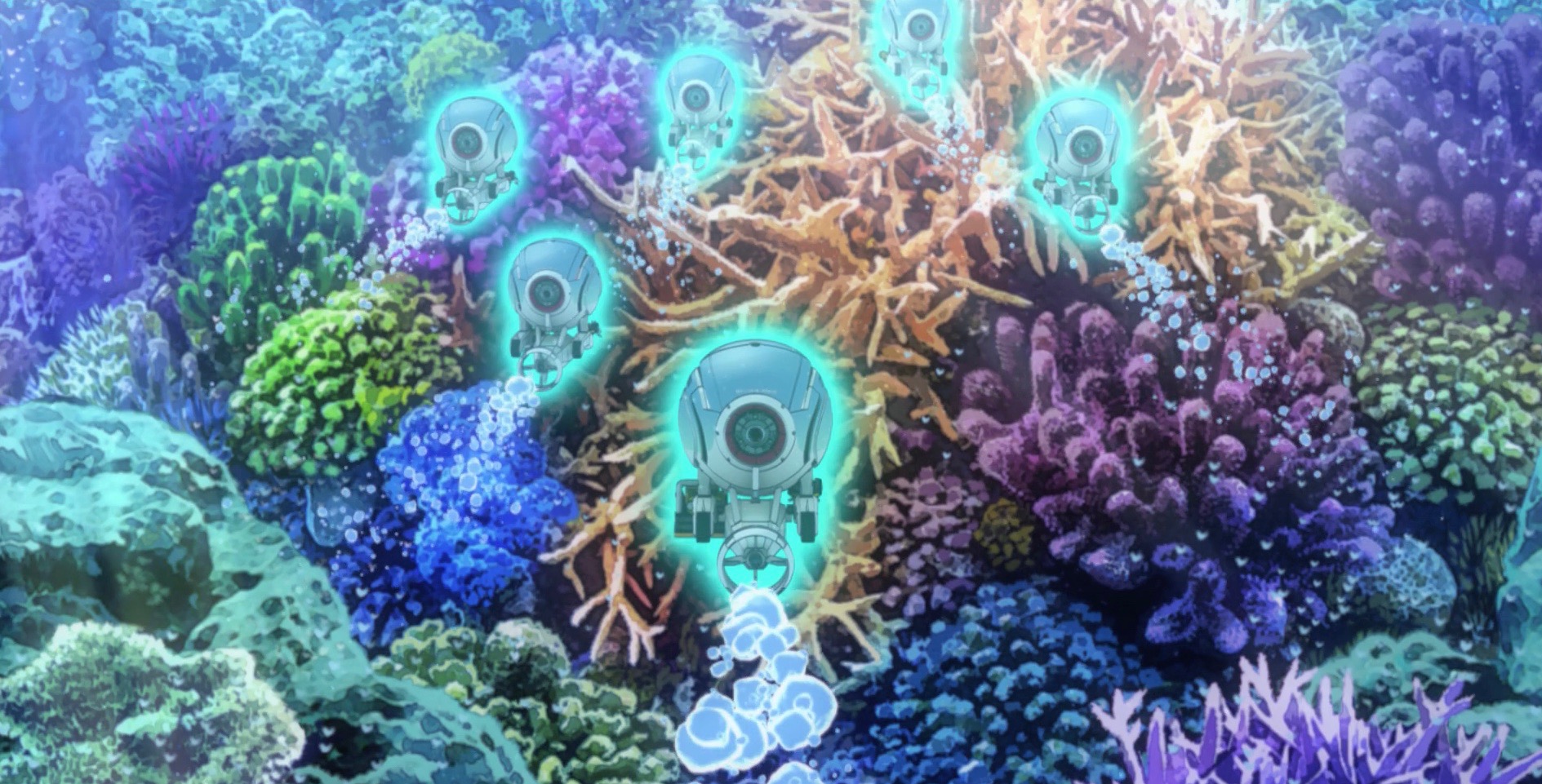 Fighting for equality against the patriarchy has never before been so filled with mobile game gimmicks. Taking on the force that kidnapped all the fish on earth and brought them to space is a rough job for a bunch of young women, but someone has to do it. It wouldn’t be fair to let the men have all the space mech fish fighting with mobile app fun to themselves. Fair warning, trying to follow this story requires a generous amount of suspending brain activity. Part of my mind is still in denial that this anime exists. Maybe it’s all just a hallucination? Nope! It’s still listed on Crunchyroll… And the episode still plays! Here we go…

Between the Sky and Sea felt like it was trying to capitalize on a popular political concept. Rather than attempt to make any kind of serious political statement, this anime exists to draw attention to a mobile game. The characters play the mobile game in space to power up their mechs and fight fish. The women are bad at it and that seems to be the story hook? I’m not sure. The sense of denial I’m dealing with here won’t be gone while writing this first episode is still relevant.

Oddest of all the bizarre elements at play is their teacher. She freaks out when one of her students uses a masculine pronoun to refer to herself. I get that she is sensitive because women have only recently earned the right to play mobile games in space, but… She needs to calm down. Patriarchal mobile games don’t justify freaking out at someone for referring to themselves with a masculine pronoun. More seriously, is that actually a problem in Japan or just a fantasy element added to this anime? I feel like heroines who use boku are common enough. I had to watch the scene a few times to make sure I understood why she was so panicked. I don’t know.

Despite all the ridiculous world building I did find Haru’s personality charming. She just wants to fish in space and seems to ignore all the nonsense going on around her. Can the politics go away and leave pure Haru alone to her mobile game fish-fighting in peace? I’m ignoring my suspicion that she isn’t smart enough to care and hoping the story isn’t planning to go there. It will, won’t it?

Maybe the message of this story will end up being politics suck, go fishing in space and play your mobile games. Don’t mind what others say even if people hate you and your stupid, worthless mobile game deity; Have fun and own it. If that’s the point this anime was trying to get at, then more power to it. I’m almost certainly giving it too much credit in an attempt to explain nonsense. I’m going to move on to something else before I spend more time looking to make sense of this anime, before my own sense of reality is harmed.