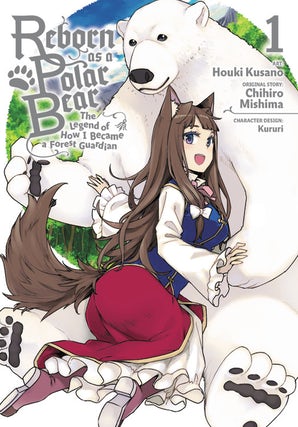 The most important thing to note about this title is that the art is stellar. The establishing shots are incredibly lush and detailed, and the character art has a lot of personality. The main polar bear looks realistically bear-like while still expressive and cute, which is a difficult balance to pull off. There’s a real sense of motion here, whether Kumakichi is squaring off against another bear, or we’re just seeing the breeze tease one of the girl’s hair as they forage for food. Sometimes the storytelling does degrade into a bunch of typical talking heads, but the other art is more than high-quality enough to make up for it.

That said, I have mixed feelings about the story being illustrated. Maybe I’ve just been spoiled by the likes of Polar Bear Cafe and A Polar Bear in Love, but I expect these talking bear stories to be rather whimsical. Reborn as a Polar Bear seems to be on the fence about whether it wants to be whimsical or not. Sometimes, it’s all sweet and cuddly, yet other times painfully realistic. Our bear hero’s first introduction to Lulutina, the main heroine, comes when he saves her from an attempted gang rape.

To the manga’s credit, the assault isn’t eroticized; no ripped clothes or questionable positioning. But if this is supposed to be a charming story of an out-of-place polar bear making his way in an enchanted forest, this seems a rather inauspicious beginning. The manga seems to want to have its cake and eat it too in terms of tone, and I’m not sure it works. Some manga can pull this off, but the inherent ridiculousness of Kumakichi waking up as a talking polar bear after falling off a mountain make it hard to take the story seriously when it gets deeply serious.

The volume isn’t without its charms. As opposed to a lot of selfish isekai protagonists, Kumakichi is almost immediately concerned with protecting the wolf sisters. The fact that he’s less worried about the how and why of becoming a polar bear and more worried about helping someone else makes him a likable protagonist. However, I’m not sure there’s much of a pull to read the next volume. Kumakichi seems to be even stronger than a normal polar bear, to the point of being nearly invincible; how worried about him can we possibly get? I think we’re supposed to worry about the werewolf girls, but hey, they’re werewolves; not exactly chopped liver. They may be weak compared to Kumakichi, but still tough in their own right. Despite the dark opening, somehow it just doesn’t feel like there’s a lot of danger here. I could probably never read this series again and be content in the knowledge that Kumakichi and his gal pals are off building a log cabin somewhere, happy as can be.

This volume may break my streak of absolutely loving every anime and/or manga about polar bears, and for that, I’m a little annoyed. I love the art, and Kumakichi is a good protagonist, but the rest of the series is just lacking. Lulutina and her sisters feel like stock protagonists, and what hints there are of a larger plot have yet to pique my interest. I may keep up with this one just to look at the beautiful art, but that essentially means that this title has succeeded as an art book, but failed as a manga.

In Summary:
A beautifully drawn manga with a likable everyman protagonist that unfortunately lacks a strong narrative hook. You probably won’t regret buying this, but you won’t exactly be waiting on pins and needles for the next volume either.