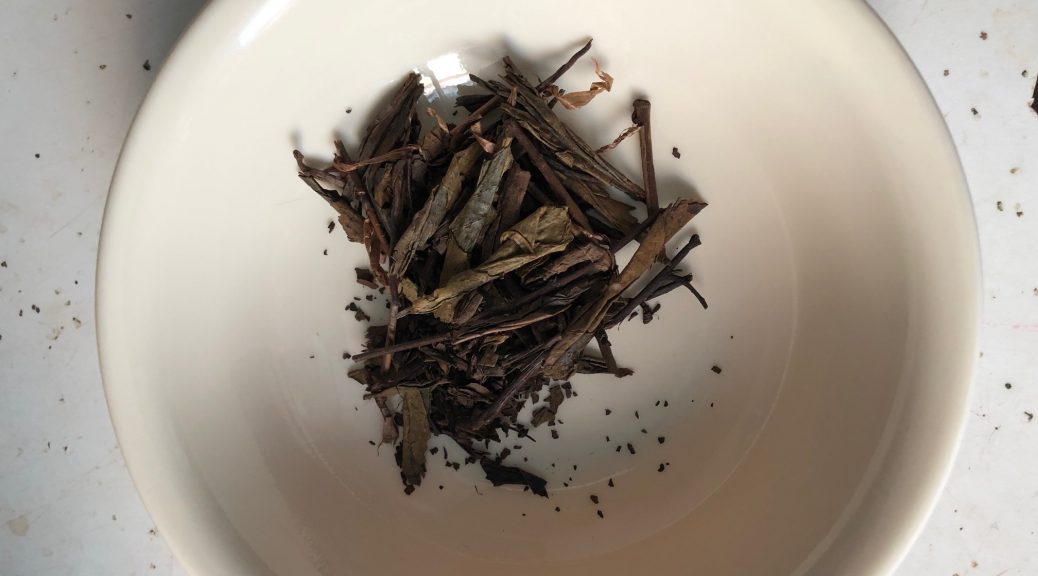 I’ve gotten really into drinking tea in the last few months, so I figured I could take advantage of this blog to review different types of Japanese tea. I was going to start with a classic green, but after watching the first episode of The Helpful Fox Senko-san, where Senko serves Houjicha to Kuroto, I realized I had to try this mysterious, roasted tea.

I ordered some Houjicha from Yunomi, a really cool online tea retailer that I recommend. In addition to sending me delicious tea, they also sent me a little “guide to green tea,” with brewing advice. I even got an email from the owner, thanking me for buying their tea. If you’d like to support a Japanese business that really appreciates its customers, try picking up some tea from Yunomi.

Some technical info: Houjicha is roasted over charcoal, so it has a different flavor from most other green tea, which is steamed. It’s made from late-harvest leaves (Bancha), which have less caffeine than leaves picked earlier in the growing season. This is part of the reason why Senko-san served houjicha to Kuroto after dinner; since it has less caffeine, it’s a good tea to drink in the evening. Some versions of houjicha are made with younger leaves, and thus are likely to contain more caffeine, but I didn’t try that kind; the kind I bought is a more standard houjicha, assuming “standard” is an appropriate term here.

Aroma: The tea smells a bit like fish and seaweed, which I found off-putting at first. I think it’s just a general umami smell, which can smell like fish if you’re new to Japanese green tea. It also has a bit of a coffee smell, but that could just be the term “dark roast” playing tricks on my mind.

Flavor: It tastes like toasted rice. Imagine you toasted rice in a frying pan, and it has just started to caramelize; that’s the kind of toasted flavor this tea has. Originally I thought I wouldn’t like Houjicha that much because I really like the grassy, sweet flavor of a good Japanese green tea, and I thought the roasting would obscure the grassiness. That’s not really what happens though; instead, the roasted flavor and the grassy flavor play off of each other. As the roasted flavor recedes, you get the more typical sweet/astringent green tea taste, so the tea has a sweet aftertaste. It’s a lovely, refined flavor.

There is definitely a mild seaweed flavor, so keep that in mind if you hate seaweed with a passion. I think the roasted and grassy flavors overpower the seaweed, but if you hate the idea of your tea tasting like seaweed, this is likely not the tea for you. The amount of seaweed flavor may also be related to brewing temperature; I may be brewing at a higher temperature than the package directions call for.

Verdict: I’m really happy with this purchase. It’s always a relief when a tea I like has low caffeine so I don’t need to worry about upping my caffeine intake too high, plus this provides a nice alternative to my typical green without changing things up too much. Also, I can take the leaves and re-steep them in cold water for an even lower caffeine cold-brew, so I can really get my money’s worth out of it. I haven’t tried this tea cold-brewed yet, but usually teas that I find delicious hot only improve in cold water, due to the lower astringency.

I have some other teas from Yunomi that I have yet to try, so expect more tea reviews. I probably won’t get another perfect anime tie-in like I had for Senko-san, but we do the best we can in the otaku-blogging biz.