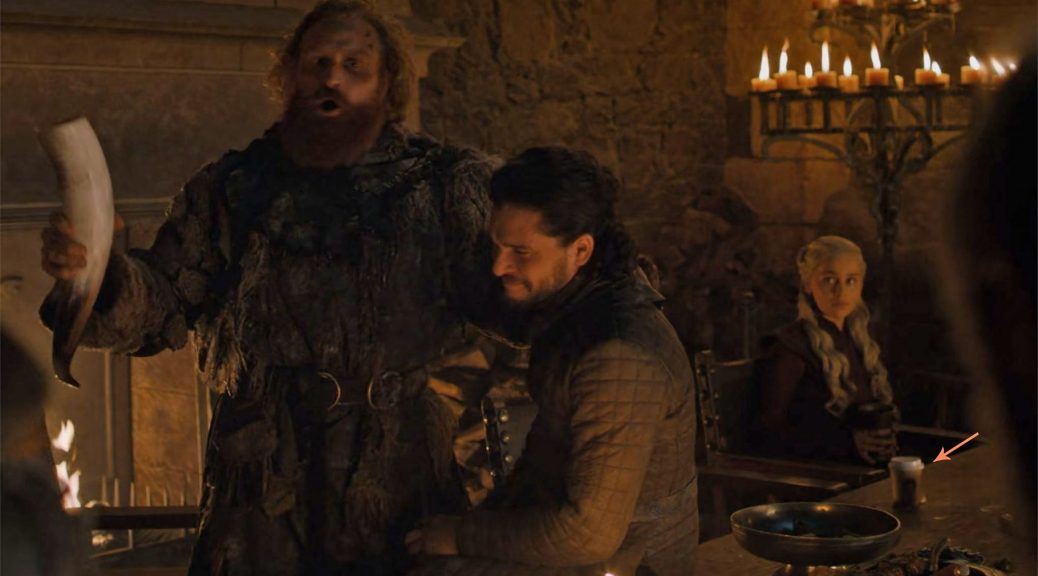 In the latest episode of HBO’s popular medieval fantasy series Game of Thrones, a disposable coffee cup was visible on screen during a feast at Winterfell. Most viewers thought this was simply a production goof, however, those of us who have read the books and all of the other relevant literature and apocrypha know better. Fans have theorized for decades that Starbucks locations exist within Westeros, and with Season 8, Episode 4, “The Last of the Starks,” it’s safe to say that these rumors have been proven true.

Of course, a Starbucks in Westeros would not be the same as a Starbucks in say, Albany; there’s the local culture to consider. For that reason, as an enlightened scholar who has read all the books and other materials, including a discarded notebook that George R. R. Martin left on a bus one time, I’m going to share with you what Starbucks is like within A World of Ice and Fire. Before you leave a comment in disagreement, please keep in mind that this is now strictly canonical and there’s nothing you can do about it.

–You must give your full name, including the name of your House, to the barista when you order. This is a nuisance, but on the plus side, if anyone misspells your name, you can have them drawn and quartered before dawn.

–If you give a Bastard surname like Sand, Snow, or Waters, in theory the whole menu is available, but you can only order decaf. Regular is not for the likes of you.

–The lowborn can only order plain drip coffee, no lattes or other specialty drinks; plus, the coffee tastes about 5x as burnt as Starbucks coffee normally does. Not recommended.

–If you answer the request for your name with “A man has no name,” your latte will be at least 90% cyanide.

–If your noble birth qualifies you for milk in your coffee, but you don’t want it, you have several options: you can order your coffee black “as a Trueborn Baratheon’s locks,” black “as a Dragonglass Dagger,” or black as “The Dread.” You can also request coffee that is “dark and full of terrors,” but there’s an excellent chance that you will end up with a cup full of scorpions.

–Giant’s Milk Frappucinos only available at locations North of the Wall.

–Anyone who demands that their espresso shots be poured over the foam in their drink, specifically, will be ritually burnt at the stake. Not as a sacrifice to the Lord of Light, but just because they obviously deserve it.

–If you say “Dracarys!” while your drink is being prepared, that’s a cue to the barista that you want it Extra Hot. They won’t actually make it Extra Hot, because scorched dairy is gross and everyone should know that by now, but they’ll imitate dragon screeches out off the side of their mouth and pretend they’re doing it.

–You can try asking for your drink “Kissed by Fire” if you want it with cinnamon. However, that’s a stupid idea since this is a Starbucks, and everyone knows that the cinnamon is located at the Condiment Bar: put it in yourself.

–All pastries and breakfast sandwiches are made with 100% Free-Range dragon eggs.

–Bagels are only served with cream cheese, not with butter. In addition, anyone who asks for jelly on a bagel will be flayed alive until they are the color of said jelly.

–If you order anything gluten-free, you must swear on the Light of the Seven that you actually have Celiac Disease and aren’t just a trendy-ass motherfucker.

–Lemon cakes are available, but only for young girls who have been forced into political marriages with dwarves or sociopaths.

–Eunuchs receive a 50% discount because really, they deserve something.

–Anyone who leaves garbage or crumbs at their table, regardless of birthright, will be castrated. On the plus side, see above.

–Once you claim a table in the cafe area, only you and your trueborn offspring may use that table. Illegitimate children can sit at your table, but they have to sit in that awkward, half-the-butt-hanging-off-the-chair position.

–Lighting other tables on fire to increase legroom is not just allowed, but encouraged.

–Starbucks Westoros is not legally responsible for what will happen if you attempt to ally with guests from other tables for any reason.

–You may get up and go to the bathroom at any time, however, once you return, the political situation will have changed so much that you won’t know where you’re sitting.

–If you sit down at your table with a laptop and begin working on a novel, you must finish the goddamned novel. If you open a browser or a video game instead, you will be forced to run naked behind a stallion until you die.

–Sex in the cafe area is allowed, but only as long as you narrate your entire life story during the act. Anyone making love silently will be asked to offer the appropriate amount of exposition or leave immediately.

–Fire exits are only guaranteed to work for regular fire, not Dragon fire. Once the dragon shows up, it’s safe to say that no one’s getting out.

–Other than the aforementioned penalties and legalized executions,  violence, war and genocide are not permitted at Starbucks Westoros locations. Starbucks Essos, on the other hand….