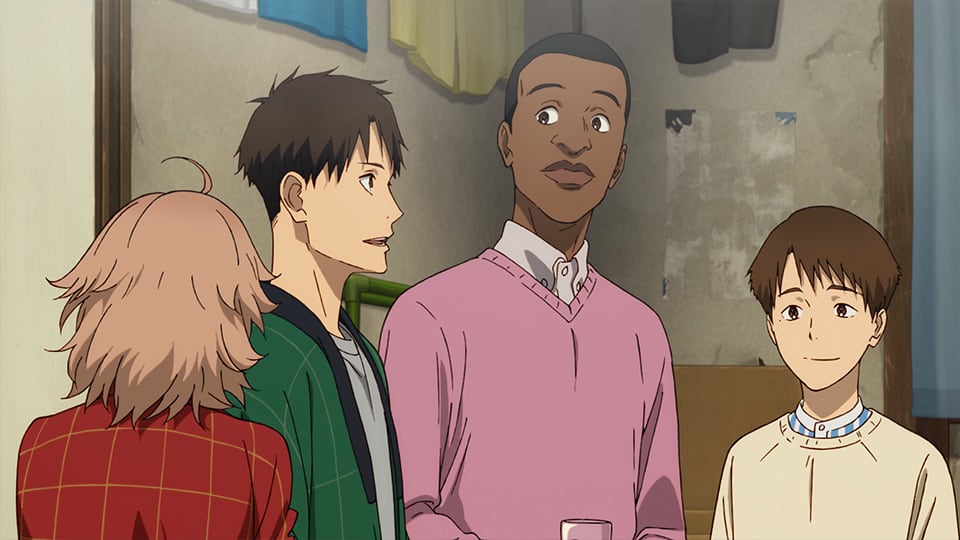 Run With The Wind was a great show, one that goes to show just how broad a category like “sports anime” can be. Among the other things it did well, it tackled the subject of racism, and did so in a kind of understated, nuanced way. I rarely see this kind of thing done so well, and especially not in anime, so I thought it was worth taking a moment to call attention to it.

Just about all of the racism depicted in the show is directed at the character Musa, a black student originally from Tanzania who’s studying abroad in Japan. I was skeptical when they first introduced the character; the choice to introduce him completely naked reminded me a bit of the Kenzaburo Oe story Prize Stock, and you never want to associate Oe with anything. (Yeah, I went there. Suck it, Nobel Committee!) Having Musa’s first impression on the audience being his lack of shame at his nudity seemed to be walking a fine line between casting the character as “goofy foreigner with different ideas about modesty” and “dated idea of the noble savage, used historically to diminish darker-skinned people.” It wasn’t the most auspicious beginning, especially when black people have so few roles in anime to begin with.*

Turns out I had nothing to be concerned about, because Musa was a fully-fleshed out character for whom race was only one aspect of the whole. Yes, his race was relevant to the story and did come up at times, but he was never presented as a racial stereotype, and he was never portrayed as being different from the other characters. The characters were all different in the sense that they were supposed to be a ragtag group of misfits that somehow coheres into a team, but Musa was never portrayed as more eccentric than the other eccentrics, if that makes any sense.

The show was smart enough to address the elephant in the room right away, too. Early on, when the dorm mates find out they’ve basically been tricked by Haiji into becoming a track team, the twins comment that running will come easier to Musa, because he’s African. Musa acknowledges that assuming he’s automatically a better runner just because he’s African is prejudiced, but he doesn’t blow a fuse over it; he simply acknowledges the ignorance of the statement and moves on. Musa is presented as someone who doesn’t tolerate casual racism, but he also doesn’t hit back like a ton of bricks when he sees someone engaging in it, either. It’s clear he thinks the problem is ignorance, not malice, since his reaction seems more disappointed than upset or angry.

Things get uglier later on when Musa has to deal with racism from within his own race. The other African characters on the show are all student-athletes who are attending Japanese universities on running scholarships, and Musa is afraid they won’t accept him. His fears are valid; the other Africans blow off his attempts to be friends with them, and generally just treat him like he doesn’t exist. (I generally dislike the word “microaggression,” but I think it fits here; none of the other black athletes do anything outright horrible to Musa, they just consistently look at him with barely-concealed disdain and don’t respond to his friendly overtures.)

Why do they treat him so poorly? Is it because they’re meant to be evil, and the show is actually being racist by portraying the African  students as being so unsympathetic? I don’t think so; try looking at it from their perspective. In their lives, they are utterly surrounded by Japanese people; the only people they know who look like them are serious track runners. We don’t learn a lot about them, but it seems likely they keep to themselves. And here comes Musa, who just started running like ten minutes ago, and is a sensitive academic, not a career athlete. He has far more in common with the Japanese students who share his interests than he does with the other African  students, and everyone knows it. From their perspective, what is he doing there? Why is this guy who doesn’t even take running that seriously showing up at meets, possibly making them look less serious about running by association? Who needs that?

And yes, it is racist of them to assume that Musa should be in Japan on a running scholarship just because he’s African; that assumption, and their behavior toward him, is clearly depicted as a bad thing on the show. However, while they are being racist towards Musa, their behavior is understandable, because we can understand their insecurities. They aren’t succumbing to racism because they’re terrible people, they are making a mistake because they’re human.

This is where I think Run With The Wind is really brave in it’s portrayal of racism. It’s one thing to have an over-the-top evil Simon Legree character whom we can all denounce as racist and feel good about ourselves, quite another to show how otherwise good people can end up going along with racist attitudes. Portraying the skewed expectations that people sometimes have for other members of their own race is especially difficult to do; if done wrong, it can make it seem like you’re attempting to blame all racism on the people who suffer the most disproportionately from it. However, you can’t address racism responsibly if you only portray it as an inter-group problem; it’s an intra-group problem, too.

One more scene that’s relevant takes place later on, when the Kansei University Track Team starts to build some momentum. Kakeru and Musa overhear some guys complaining that the Kansei team has an African student on it, preferring them to field an “All-Japanese team.” The implication is that, since Musa is African, he’s not a ‘real’ Kansei University student and doesn’t count. Kakeru, hothead that he is and offended on Musa’s behalf, wants to go give these people a piece of his mind, but Musa stops him. It’s not that Musa isn’t bothered by these comments, but as he explains to Kakeru, what would be the point?

You don’t win out over racists by getting into arguments with people on the street. You don’t drown out prejudice by yelling at people who are being ignorant, because if they could understand you, they wouldn’t be ignorant. The real work to chip away at racism, as Musa well knows, is the stuff that’s going on at the old dormitory, where the other students from all different walks of life have learned to see Musa as one of their own. It also chips away at racism when Musa participates in Track and Field as a hobby, while his main focus is his academics; he’s a talented runner, but he’s not the best runner on his team, and that’s okay, because that doesn’t have to be. Appropriate for a long-distance runner, Musa is seeing the big picture. He can engage with running at whatever level he wants, and he doesn’t need to care how other people perceive that. And by living that way, he may convince a few other people that they don’t need to care either.

There’s some other interesting stuff going on in RWTW. For one thing, the fact that Haiji forces the entire dorm to start running raises some interesting questions; people are very big on questioning consent in fiction these days, but apparently only when the topic is sexual in nature. On this show, one of the main characters tramples all over his teammates’ consent, and I haven’t heard a peep from the usual suspects about it. In any case, whatever I was expecting from this show, it wasn’t such a sensitive portrayal of racism, or such a mature, likable character in Musa. High marks, all around.

*I’m not suggesting by the way that Japan is being negligent by not including more black characters in anime; the only ethnicity regularly represented in anime is Japanese, and it’s Anime-Japanese, meaning the characters usually don’t even look Japanese. The question of what greater representation for non-Japanese races should or could look like in a medium where even the majority population doesn’t look like themselves is a really complicated topic that goes beyond the scope of this article.