(This review was originally posted to The Fandom Post.)

I spent 100 hours leveling up to beat Sephiroth for this? 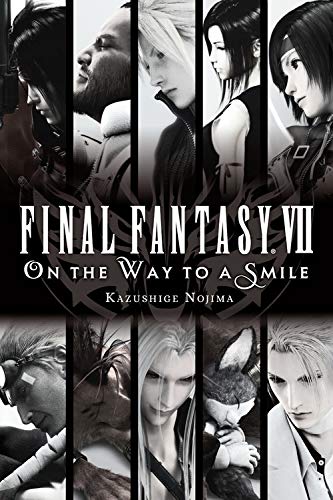 Final Fantasy VII was the first JRPG I ever played, and only the second game I ever completed; to say that it holds a special place in my heart would be an understatement. I think there is actually entire chamber of my heart that is roped off and says “Reserved for Final Fantasy VII (and also VIII, sometimes).”

Sadly, I haven’t enjoyed any of the attempts that developer Square Enix has made to revisit that universe. I found Advent Children, the movie sequel, more irritating than anything else, and none of the prequel games that SE released seemed appealing. Maybe I just hold FFVII to too high a standard, but to me, the original game was like lightning in a bottle; a rare artistic achievement where the entire production came together to be more than the sum of its parts both as a video game and as a larger fantasy narrative.

So that leaves me in a weird place with On the Way to A Smile, basically a prequel to a movie that I didn’t like, but based in a world that I unquestionably love. This story collection bridges the gap between the end of the game and the beginning of Advent Children, a period of about four years. I tried to put aside my general dislike of all FFVII expansion material and approach this book with fresh eyes, but I’m not sure I succeeded. It seemed intent on reminding me of all the things I have never liked about attempts to continue the FFVII story beyond the final boss fight.

For one thing, this book is pretty dark; everyone is so despondent that you almost wonder if it wouldn’t have been kinder to let Sephiroth destroy the world and put everyone out of their misery. Now, it was always a dark world, and it’s not like I expected things to suddenly become happy and light-hearted after Sephiroth was defeated. I mean, it’s nice to think about Cloud and Tifa being married with 2.3 kids and a dog, Red XIII finding a girlfriend and having the best animal romance since The Lion King, or Cid starting the Gaia version of NASA, but I knew it would never be that easy for these characters. Still, this book goes too far in the other direction by making everybody utterly miserable. What makes it unforgivable to me is that this book requires the characters to forget the things they learned in the original game in order to be unhappy.

Remember how Barret’s character arc in the game had him realizing that while he’ll never be the father he thinks Marlene deserves because of his past, he’s nevertheless the father she has, and he needs to be there for her? Well, this book has him dump Marlene on Tifa early on so he can “settle his past,” which he should already know is a fool’s errand. When he ends up doing something useful, it’s more because he stumbles into it than anything else. Cloud and Tifa, who achieved a state of great intimacy by the end of the game- to the point where they even shared a consciousness at one point- treat each other like awkward strangers, and struggle to communicate. Yuffie goes on a useless quest that she knows has no chance of success, but does it anyway because she thinks her pluck will give people hope, or something. Wasn’t Yuffie the one who wanted results, not just idle talk? Cid is doing fine, so naturally, Cid isn’t in the book that much.

It’s certainly not all bad. It clarifies a lot of things about Advent Children that were always a bit hazy, and some of the individual stories are interesting. I particularly liked Red XIII’s story, because even though it was depressing as all hell, at least he seemed properly in character. But man, talk about going out of your way to snatch defeat out of the jaws of victory. Most of the characters don’t even seem conscious of the fact that they saved the entire planet, because that might give them something to feel good about. Yuffie at least acknowledges it, then is promptly told that no one wants to hear about it and she should shut up.

And yet, for all my complaints, there’s something here. We’re dealing with a society that both regrets nearly destroying nature, yet fears the raw destructive power of nature; a worldwide slump brought about by extreme corporate mismanagement; an epidemic with no cure, without enough medicine or health providers to go around; A rapid increase in technology, while at the same time, a desperate need for a new energy source that doesn’t seem forthcoming. Even though this book doesn’t do right by the cast of the game, I would be lying if I said it didn’t feel relevant. It’s almost too relevant, if such a thing is even possible; I mean, I just ostensibly read a Final Fantasy book, and here I am thinking about health care and diminishing fossil fuel supplies instead of Chocobo Racing. Is that okay?

In fairness, most fans of FFVII are probably less picky and will find more to like here. If you liked Advent Children (and a lot of fans did), you’ll probably like this. And it’s always nice to see interaction between beloved characters that didn’t get much one-on-one time in the original game, like Yuffie and Red XIII. With all this sequel material though, I’m always left wondering if SE perhaps doesn’t understand the story of the original game they made, or if maybe I’m the one who doesn’t understand. It’s not a good feeling, either way.

In Summary:
A short story collection that succeeds as a supplement to the Advent Children film, but may leave series fans wondering if Final Fantasy VII was always this macabre and joyless.

One thought on “Review: Final Fantasy VII: On The Way To A Smile”