(This review was originally posted on The Fandom Post.)

Never turn down an invitation from a sassy crustacean, especially if you haven’t decided what’s for dinner yet. 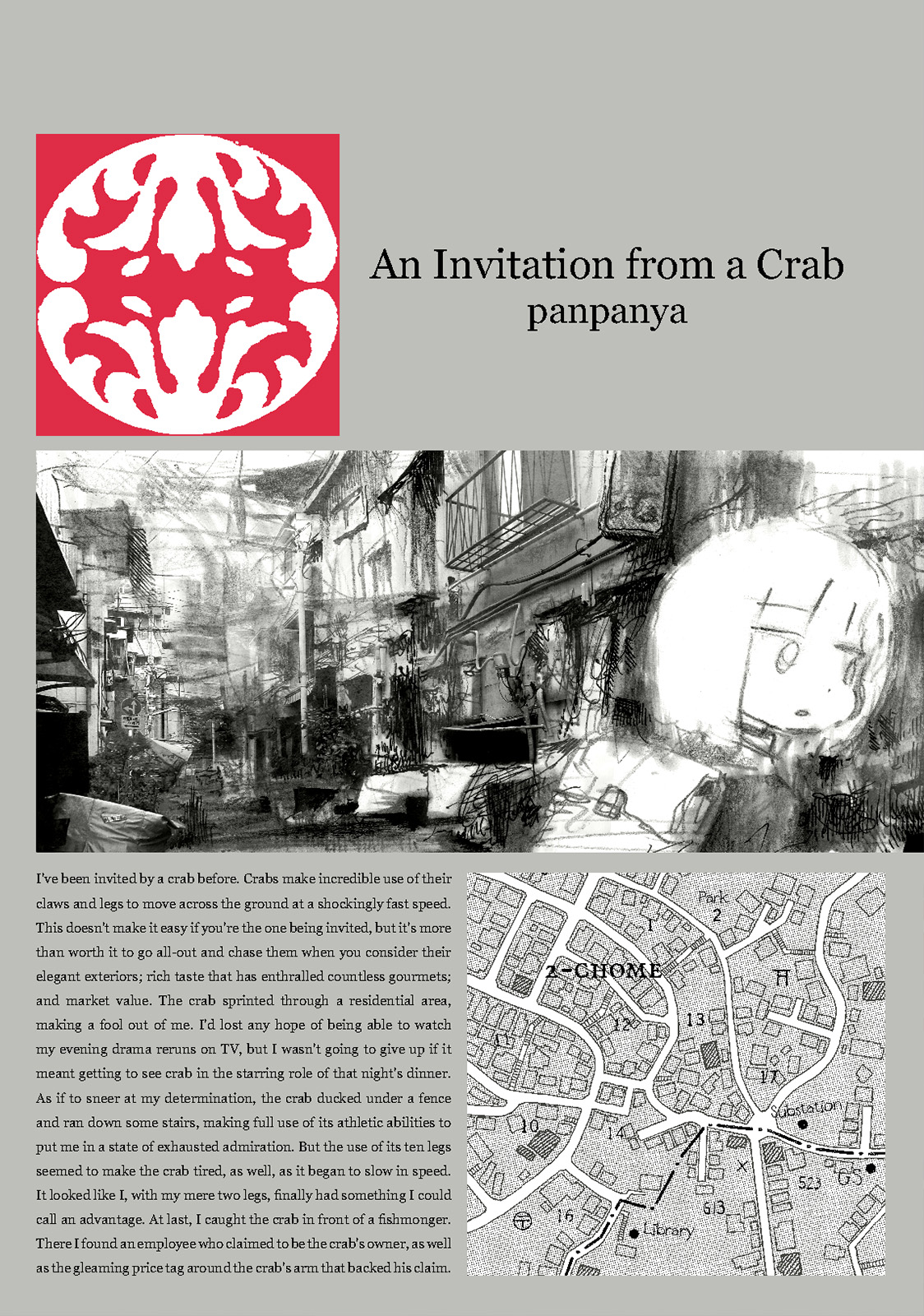 Denpa, the new publisher on the block, specializes in publishing manga that are a little off the beaten path; either hard to categorize, or simply overlooked. This is a good thing, but I think we need to be careful not to let the company’s niche color our perception of their books too heavily. After all, if we assume that every book that comes out of Denpa is going to be some strange, art-house affair, we’re probably doing a disservice to much of what they publish; just because a book has been overlooked for English-language publication thus far doesn’t mean it’s necessarily strange.

All that said, make no mistake: An Invitation from a Crab is strange. A series of vignettes featuring the barest suggestion of a manga-style school girl traversing warped, sometimes muddy backgrounds, all the while experiencing bizarre encounters with fish and crustaceans, interspersed with essays from the author on topics like “what is that light produced by the inside of your eyeballs?” Yeah, that’s unusual, to say the least.

What’s compelling about Crab is the way it presents its own brand of surrealism. Concepts like a dolphin-powered calculator seem like they would be right at home in The Hitchhikers’ Guide to The Galaxy, but the mood is much more Günter Grass than Douglas Adams. Even the stories that deal with more mundane subject matter always give the sense that something sinister is afoot. Our sketchily rendered protagonist may be able to eat a crab hotpot for dinner, but she may not really be at the top of the food chain. The world here is one of endless consumption, where humans and animals alike are put through a symbolic meat grinder, and any attempt to reconnect with the natural world is doomed to end in failure. It sounds like I’m saying this manga is anti-capitalist, and that may very well be true, but I think that may be an oversimplification. Something else is going on here; I’m not exactly sure what, but I’m going to keep thinking about it until I figure it out. Hopefully.

Something else I need to figure out is how I feel about this book’s art. Some of the backgrounds are great, with an almost sculptural quality, like the environments have been chiseled out of the paper somehow. Other times, the art becomes more minimalist and blurry, and I’m not sure it works. Ironically, the detailed, clear backgrounds do a better job of communicating the surreal mood of the story than the more smudgy, suggestive panels. The art is always at least adequate to tell the story, but if were always as good as panpanya is clearly capable of, I think we’d have something incredible here.

Whether or not the art is up to the level of the writing (and I’m sure others would disagree with me there), this is an unusual, thought-provoking title that discerning adult readers should seek out. The book may be rated Teen, but I think it’s mature (in the best sense of the word), and likely to be of particular interest to people who have already been reading manga for many years. If any 14-year-olds want to read it, hey: knock yourself out. Don’t let me stop you! But I think part of the experience of An Invitation from a Crab is comparing it to the other manga you’ve read, and the deeper your personal catalogue is, the more you’ll get out of it.

In Summary:
A surreal collection of stories and short essays with a serious bite to them, despite the fact that they may seem nonsensical at first.