As you already know if you saw my status update, trying to attend a huge, huge convention didn’t work out so hot for me. That said, there’s still some stuff I did at the con that I wanted to write a little about before we get too far past it. Besides, whatever problems I was having, at least I had tons of cool cosplayers like the above gender-flipped Sailor Moon Boy Band to cheer me up.

Saturday, Nov. 17 was unofficial Manga and Light Novel Day at the con, since most print publishers had their panels that day. I was able to attend panels for Kodansha, Denpa Books and Vertical, Inc.; I wanted to attend the Viz Media panel, but that was full to capacity before I even got there. Curses! It’s like Viz has mega-popular franchises in their catalogue or something. Yen Press also had their panel that day, but unfortunately, I was getting sleepy and dragged my sick ass back to the hotel instead of staying for it. Unfortunately, I couldn’t attend nearly as much as I wanted, but on the plus side, I found the panels I did attend to be quite interesting. 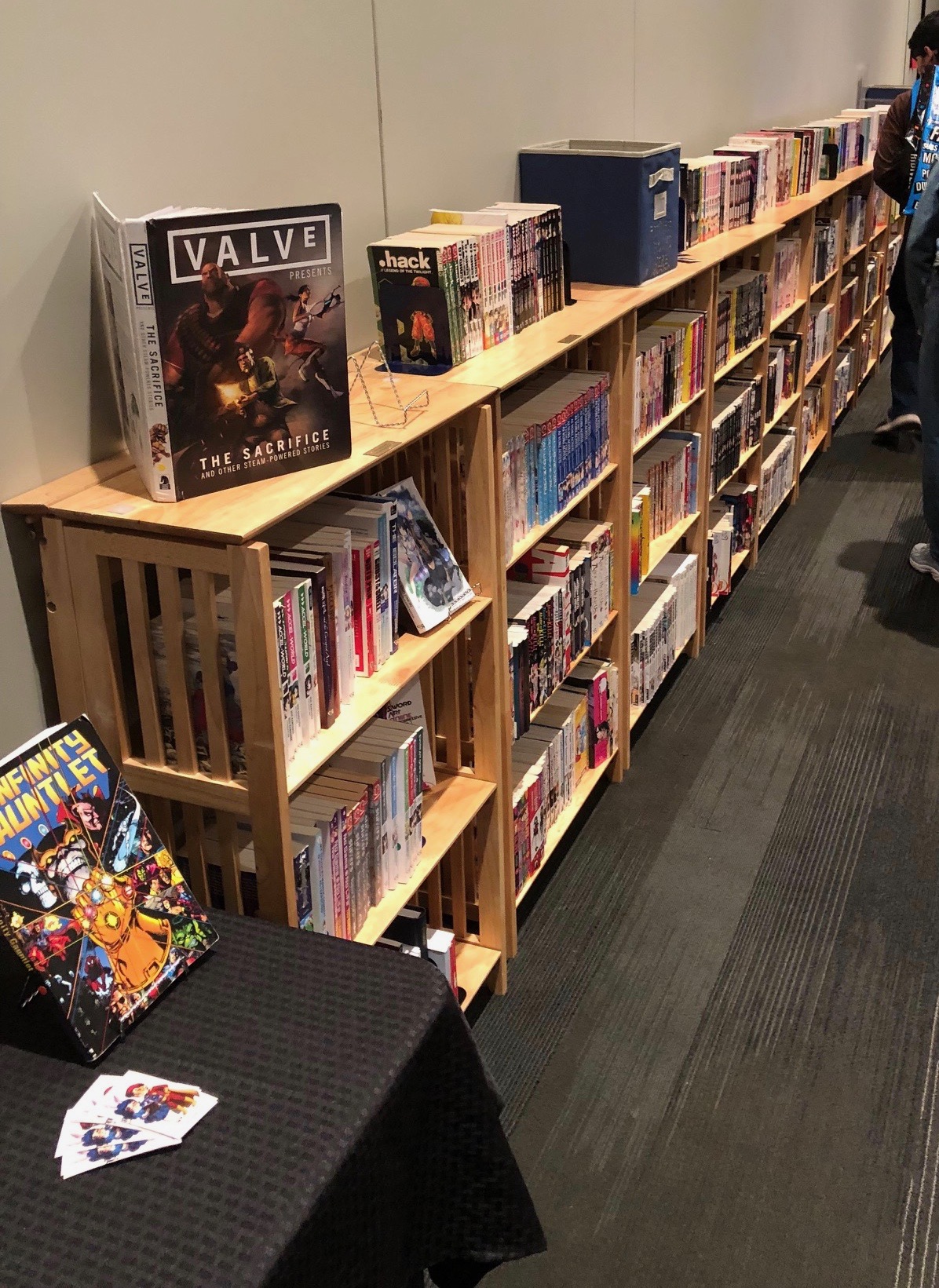 They had twice as much manga as this, but I didn’t take a pic of the whole room because I didn’t want to get photos of people reading their manga. Privacy, yo.

Not a panel, but I wanted to at least duck my head into the Manga Library while I was there. For a while, I didn’t really get the point of manga libraries at conventions, to be honest. It’s like, “I just moved heaven and Earth to get to this convention, at great expense; why don’t I just squander this opportunity by ignoring all the con programming and reading Fruits Basket in a corner for four hours?”

What I didn’t realize then, but has become increasingly obvious to me now, is that it’s really nice to have a quiet place at a major con where you can just relax, without being surrounded by thousands of other people. I don’t think the main purpose of manga libraries is to cater to people with anxiety, but if you do happen to have anxiety, being able to tuck yourself away somewhere nice and quiet with a favorite manga for distraction can be extraordinarily helpful. I know some cons have instituted “quiet rooms” or what have you for this reason, but I like the manga library better specifically because it serves multiple purposes. Even people who really like the hustle and bustle of a big con can benefit from spending a quiet hour or two in the manga library, and then people with anxiety aren’t effectively segregated from everyone else.

The manga library at Anime NYC was provided by the Carolina Manga Library. Carolina doesn’t just do conventions, but also schools and libraries, so check them out if you want to set up a manga book fair in your neighborhood– because why wouldn’t you?

The Kodansha/Vertical, Inc. panel was a long list of manga and light novel announcements, which are by now old news, so I won’t detail all of them here. They did spend some time talking about the new Sailor Moon Eternal Edition, which kind of annoys me; I just bought the complete English-language Sailor Moon manga that Kodansha put out a couple of years ago, and now they’ve got this whole new version with interior color pages and all that great stuff. Similarly, they’re releasing a hardcover “Collector’s Edition” of Card Captor Sakura in spring 2019, right after I just bought the omnibus editions of that series not long ago.

This is like when you rush out to buy a great JPRG, only to have it come out later for PSP or Vita with better graphics and added dungeons and all kinds of new stuff, and I’m getting tired of it. I guess I am happy for fans who get to buy these better-than-ever editions, but I’m not buying either magical girl series again; do I look made of money to you? Anyway, my personal regrets and bitterness aside, it’s a good time to be a magical girl manga fan (who isn’t me).

They also talked about a title called Gleipnir, which is supposedly like  “Pokemon meets Prison School,”; Kodansha editor Ben Applegate confessed to being “deeply ashamed” of how much he enjoys this manga, so if nothing else I’ve got to find out what’s going on there. Gleipnir comes out March 5, 2019. 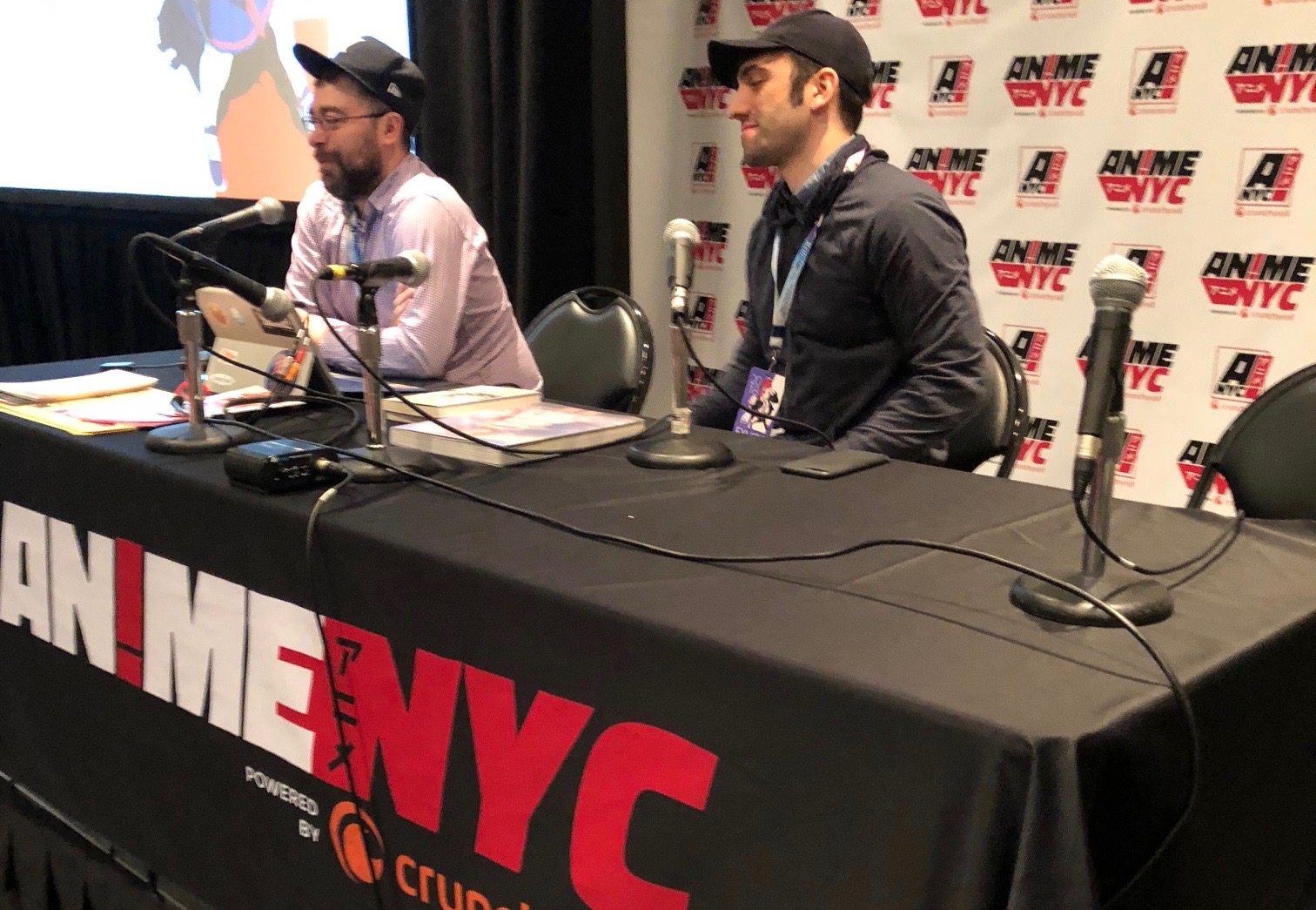 I didn’t even know Denpa Books existed until Anime NYC. They just started up this year, and considering that I haven’t exactly been watching the manga industry like a hawk, it’s not surprising that they’ve been kind of under my radar. But I was really impressed by what they had to show at the convention. Their publishing schedule for the next six months or so is full of unusual, quirky manga that you might not expect to see published stateside…and the manga version of the especially fluffy Fate/Stay Night spinoff, Today’s Menu For The Emiya Family.

Huh. I guess even artistic, boutique publishers need to milk the Fate cash cow every now and then to keep the money flowing (and who am I to judge?) To be fair, Denpa Founder Ed Chavez straight-up admitted at the panel that some of the titles that his company would be licensing would be done for financial reasons, despite the company’s general preference for more obscure titles with high artistic merit, so there’s no obfuscation about this.

Anyway, what’s particularly impressive about Denpa is that they’re a standalone company; they aren’t a subsidiary of Hachette, or Penguin, or any other large publisher, which is what you would usually expect. Out of their upcoming releases, personally I’m most interested in Maiden Railways. The fact that someone made a josei manga, focused on love stories, but said manga is also all about trains, sounds like something I would make up as a joke for the podcast, but no, apparently it really exists. I’m fascinated by the prospect of examining fanatical railroad obsession through a uniquely feminine lens, and if you’re not…well, let’s just say I question whether or not you know how to party.

In any case, I want to read pretty much everything Denpa has in the pipeline, so don’t be surprised if you see reviews of some of their manga pop up here in the future.

Most of Vertical’s panel was dedicated to the forthcoming release of the Katanagatari light novels and uh…I’m not a fan of that series. I watched the first episode of the anime when it came out years ago and was hella bored, so I’m not that interested in going back to read the source material. Translator Sam Bett of BestBettJapanese had a lot of interesting things to say about the translation process though, so it was still interesting on that level.

Just to give you an example, Bett replaced the term “deviant blades” in Katanagatari with “mutant blades,” because in his opinion, the term ‘deviant’ brought up moral, Christian associations that weren’t appropriate to the setting. I liked this anecdote because it goes to show just how complex the process of translation really is; you’re not only dealing with the literal meanings of words, but also their connotations, and where those connotations came from.

He also noted that he decided to use a lot of footnotes in a “Jokey, kind of postmodern way,” which almost makes me want to buy Katanagatari despite my general lack of interest in the series; I’m a sucker for footnotes. Perhaps I will review it just so I can talk about the footnotes…stranger things have happened.

That’s all for my Anime NYC experience; it may not have been a good time for me, but I still feel comfortable saying it was a good convention in general. It has pretty much everything you could want at an anime con, and then some.