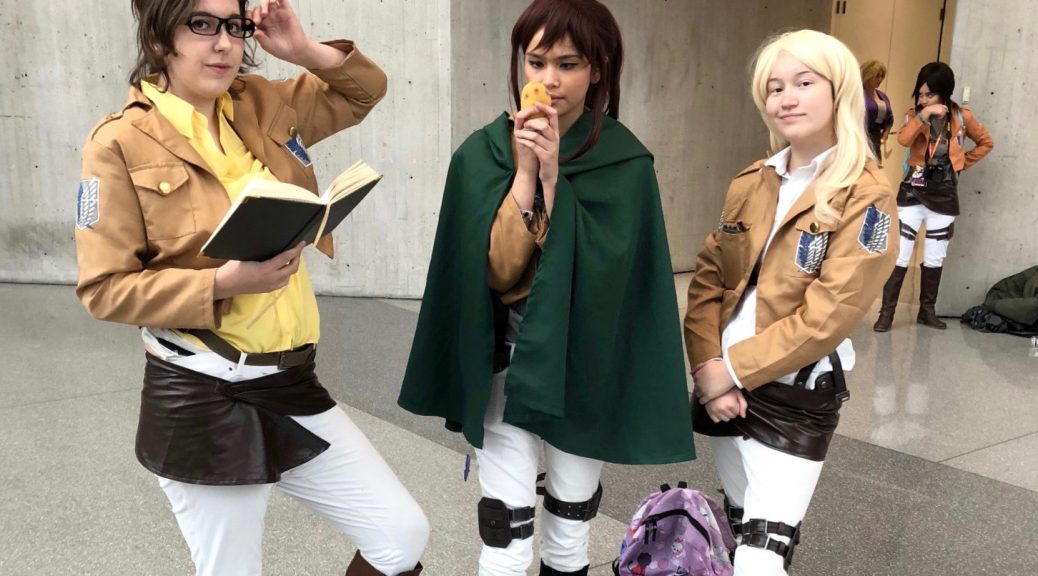 I’m going to level with you all: I didn’t actually do that much at Anime NYC today. I was really tired by the time I even got here, and I only ended up making it to maybe half the panels that I’d planned on. I’m hoping a good night’s sleep in our (tiny) hotel room will help, and I’ll be able to see more of the sights tomorrow. Also, you can bet I’m loading up on that complimentary Continental Breakfast, so I should be well-fueled. Screw keto, I’m all about the free carbs.

First, I dropped into the Arc System Works Panel, where they were showing off their upcoming Kill La Kill game. The trailers and such they showed have already been posted online, however, new characters are now playable that were not ready at previous conventions, including Nonon. I hope I get a chance to make my way to the Arc System Works booth in the exhibition hall and try out the game tomorrow.

Next, I checked out the How to Live and Study in Japan panel, presented by Go! Go! Nihon. Frankly I think I missed my window of opportunity to study in Japan (*sniff*), but the service also offers Study Trips that combine a vacation with Japanese learning, so that’s a possibility for me– not right now, but maybe someday.

Presenter Christopher Lee detailed his own experience, and gave some details about the schools this program is affiliated with. I was interested to learn about Nihon Kogakuin Japanese Language School; it’s actually a top school for animation and design, but it also has a Japanese language program that’s open to total beginners. For Westerners who want to become fluent in Japanese and perhaps work in the anime industry someday, it sounds like about as good a deal as you’re going to get.

Next I sat in on a spotlight panel with voice actor Toru Furuya. Furuya has had about a billion different anime roles, including Yamcha from Dragonball Z and Sabo from One Piece, but he’ll always be primarily known to me as Tuxedo Mask from Sailor Moon. In fact, when it was time to put in interview requests for the guests for this con, I didn’t even try to get some time with Furuya, because if I tried to interview him in any capacity, I’d just be sitting there bug-eyed like “OH MY GOD IT’S TUXEDO MASK,” and that would just waste everyone’s time.

Furuya graciously answered questions about his roles in a long list of anime productions, but naturally I was most interested in his comments on Sailor Moon. When asked about his favorite part of that show, he noted that the actresses playing the Sailor Senshi were all very pretty, and he liked attending the recording sessions because of that. Heh. Gotta love the honesty.

Probably more interesting for long-term anime fans were Furuya’s comments on Gundam. He talked about the possibility of the original Mobile Suit Gundam series being remade with modern animation techniques, which prompted the question of whether or not he’d reprise his role as Amuro Ray if such an opportunity presented itself. Furuya answered in the affirmative before his translator even had a chance to translate the question. In general, Furuya seemed very enthusiastic about his involvement in the Gundam franchise (although he denied wanting a cameo in an American Gundam movie, should one ever be made.)

Next, like any self-respecting otaku with the desire to burn money I don’t have on keychains, plastic swords and wall scrolls, I checked out the exhibitors hall. Actually I behaved myself (for once) and didn’t buy much at all, but there was some interesting stuff going on in the hall aside from all the cool merchandise on sale. Yen Press has a bunch of little events going on to promote That Time I Got Reincarnated As A Slime, and as a pretty big fan of the show right now, I was pleased to see it. First, they had a “draw your own Rimiru” board: 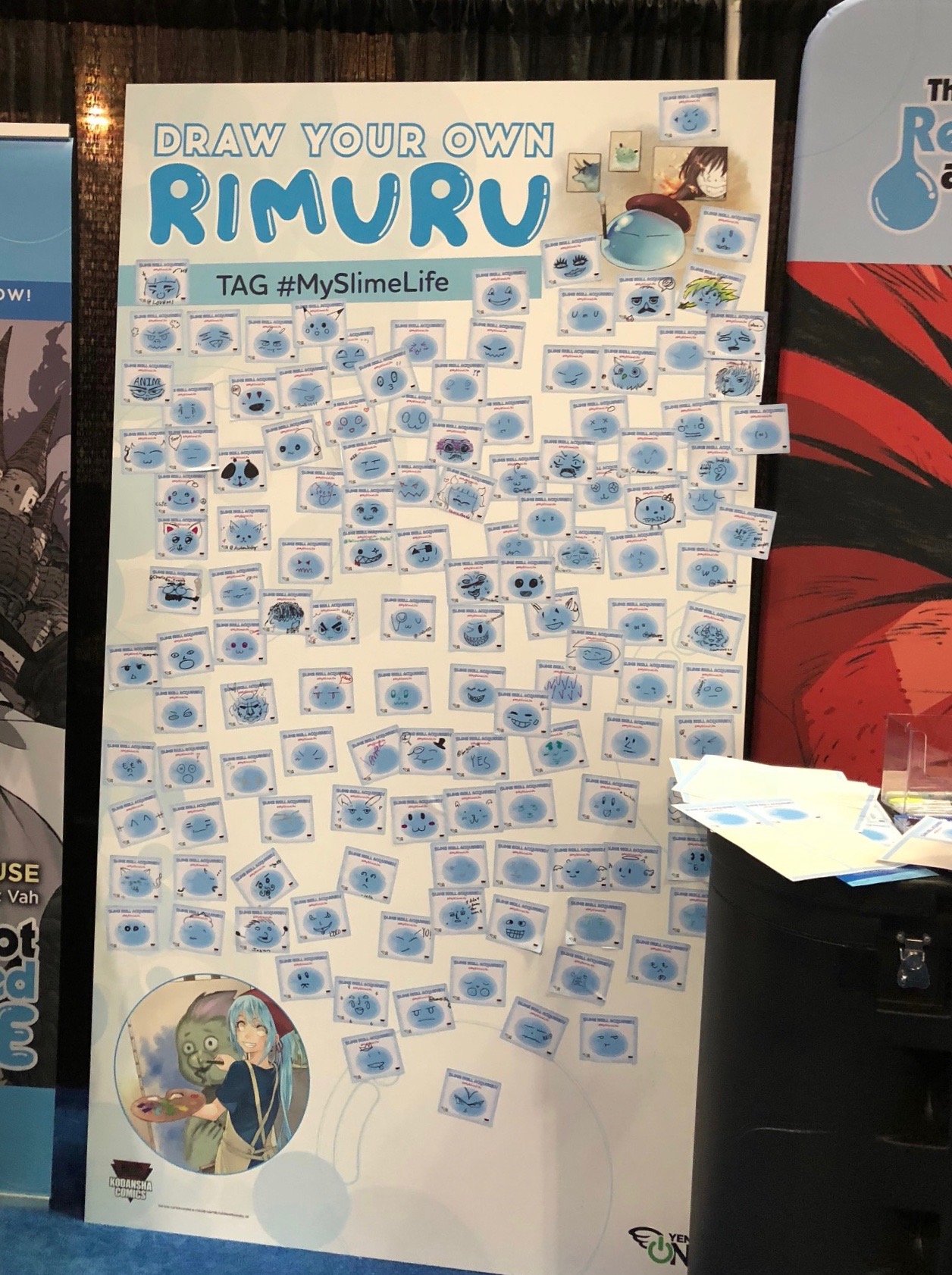 Many slime fans had come this way before me.

So you know I had to get in on that: 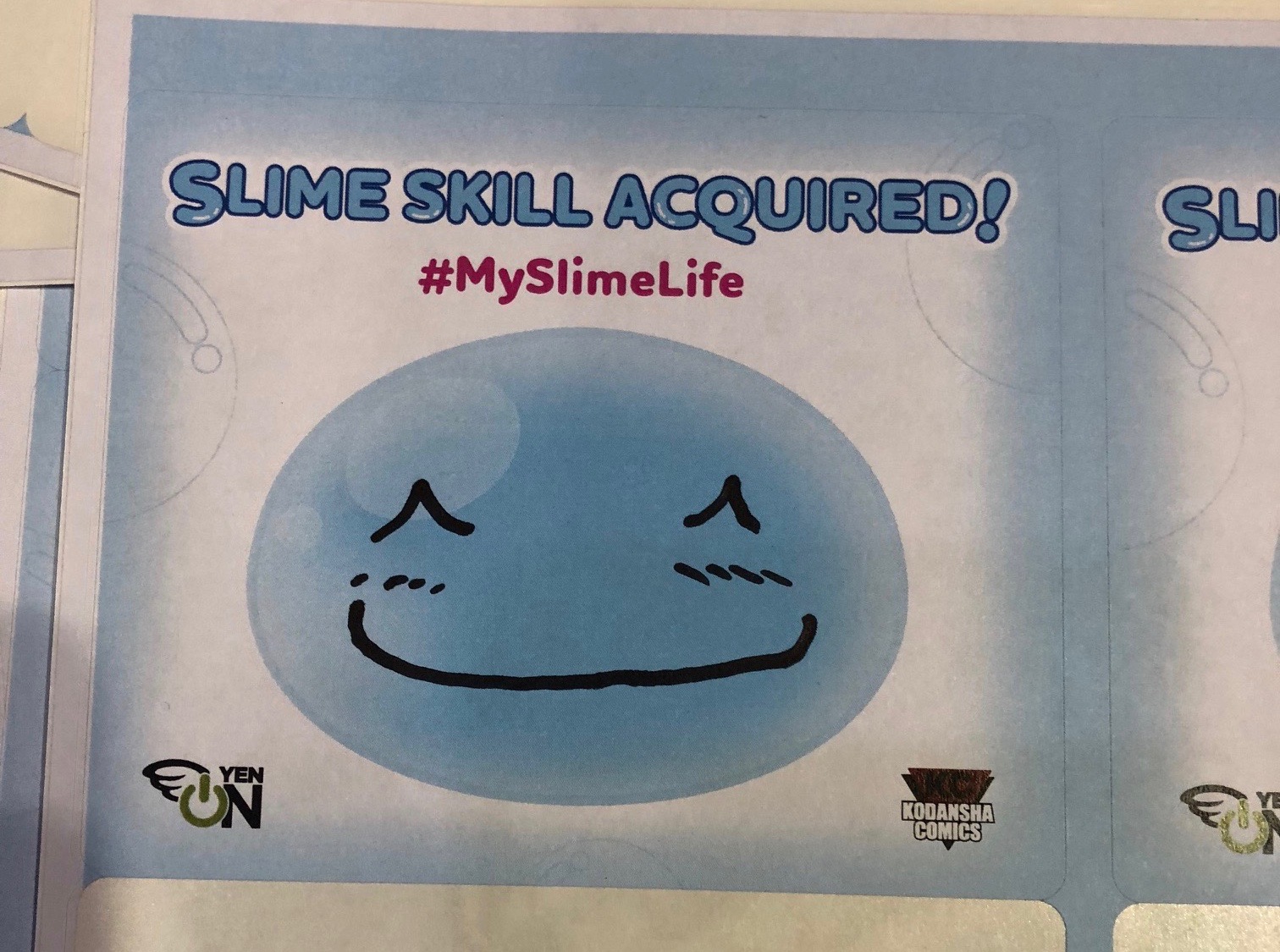 There may have been better-drawn Rimuru’s on the board, but were any of them happier than this little guy? DOUBT IT.

Finally, I got to hug Rimuru! Yen Press is running some kind of contest where you get your picture taken with Rimuru and post it on Twitter and then you could win a prize or something, but honestly, I just wanted to hug Rimuru. Maybe I’m no Elven tavern wench, but I like to think that my Rimuru was reasonably happy with this turn of events. 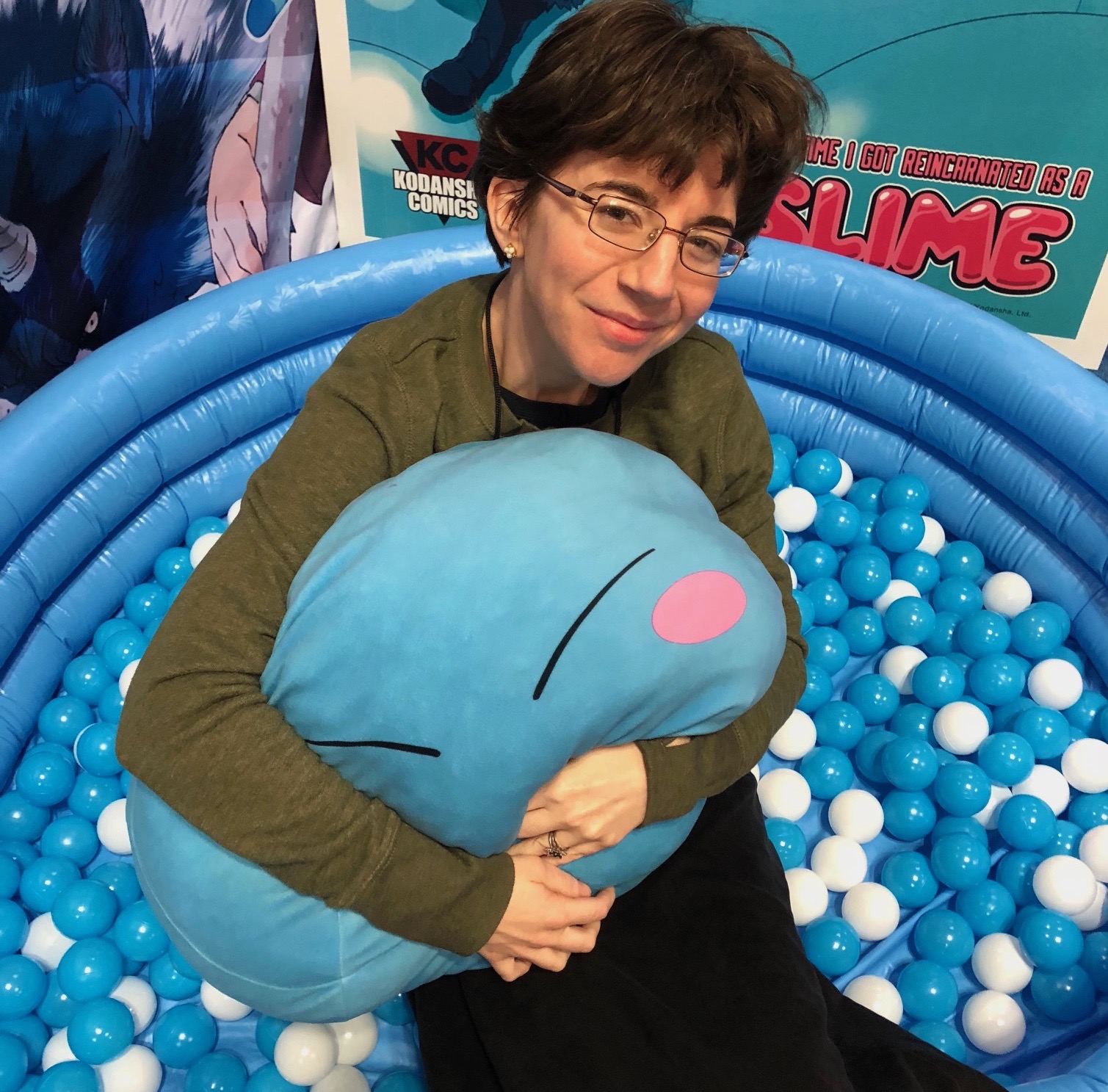 That’s it for Day One of the con. “But where are all my licensing announcements? Where are my copious cosplay photos?” We’ll get there. I just nearly started an electrical fire in the hotel room trying to make a cup of decaf, so I think I’m going to cut my losses for today and GO TO SLEEP.