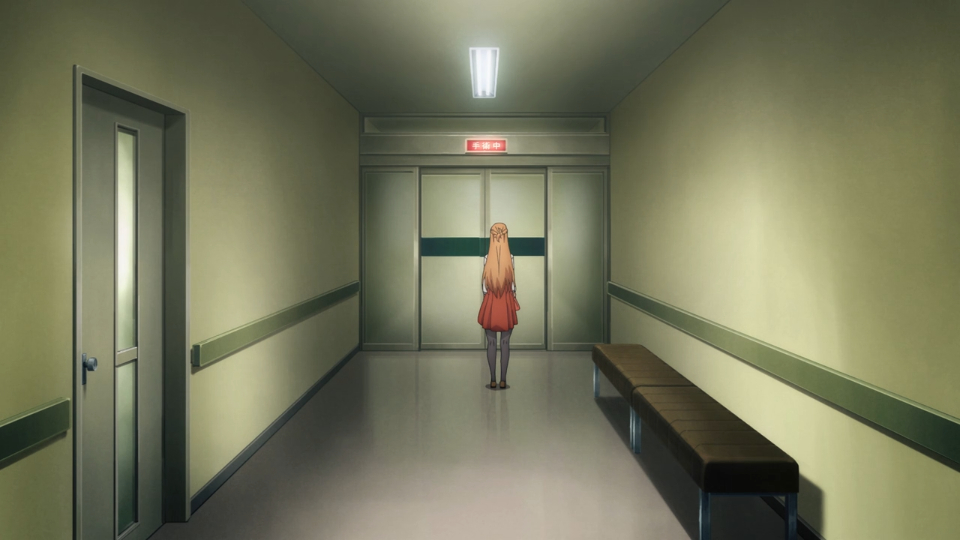 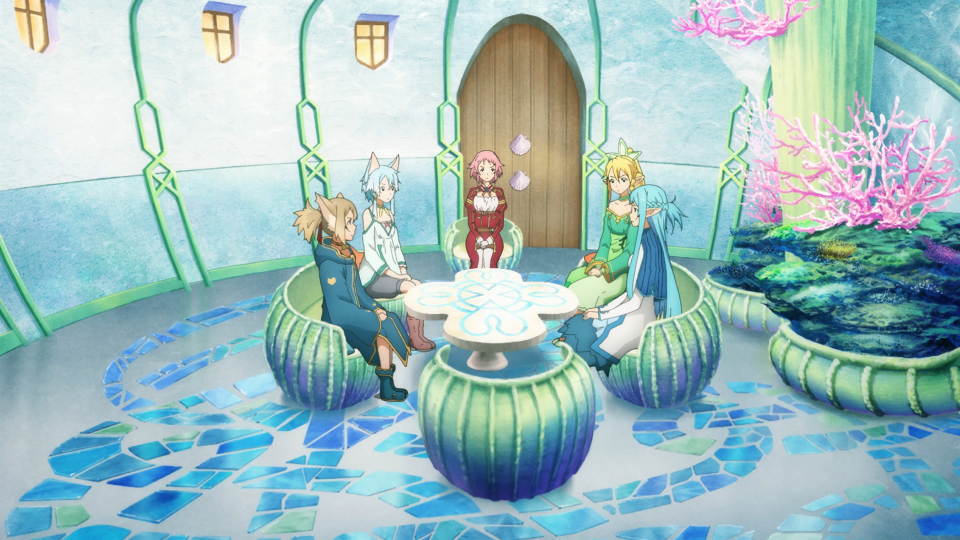 Since this episode focuses on Asuna, this seems like a good time to take a step back and look at what a cool character she’s become. During the Aincrad arc, she was an immature kid– which was totally understandable, since she was a sheltered teenager drawn into something huge that she couldn’t have anticipated. Nevertheless, she did seem a little whiny and self-centered to begin with. But she’s grown to the point where, by the time of Mother’s Rosario, she not only felt like an adult, but she essentially became co-protagonists with Kirito. That set-up pays dividends here, where the whole episode can be Kirito-free and it never really feels like we’re missing out on the “main” character.

She also functions similar to Kirito now, using the same kind of hands-on approach to problem solving. Part of that is because she hasn’t been his girlfriend for years without learning anything, and part of that just goes to show why they work so well as a couple to begin with. They aren’t together for only superficial reasons; they both have an almost pathological need to right injustices. On a more basic note, we now get Hero! Asuna rescuing Damsel! Kirito, and that’s a nice change of pace.

In terms of the larger story with Rath, I’m wondering about Kirito’s overall significance to the Underworld project. Obviously Rath wants Kirito’s consciousness in there because they expect his presence will cause the AI to grow in a certain way, but does it necessarily have to be Kirito in that role? I think it’s less that Kirito has super-special soul juice or whatever, and more that he just happens to be the person who was integrated into the system first, so Eugeo and Alice have memories of him. If it turns out they need Kirito because he is just that special of a snowflake, I’m going to be a little disappointed.

It was nice to see everyone working together as a team; even something as simple as Klein driving Asuna around in his car shows that in the real world, they all have different roles and can contribute in different ways. Considering one of their team members is a nigh-omnipotent AI, things feel a little bit stacked in their favor, but I guess it’s a little bit late to be complaining about that? It just goes to show, if you ever find a down-on-her-luck orphan, be nice to her: she may turn out to be a Goddess AI who can hack government databases for you! Always a useful tool to have in one’s back pocket. 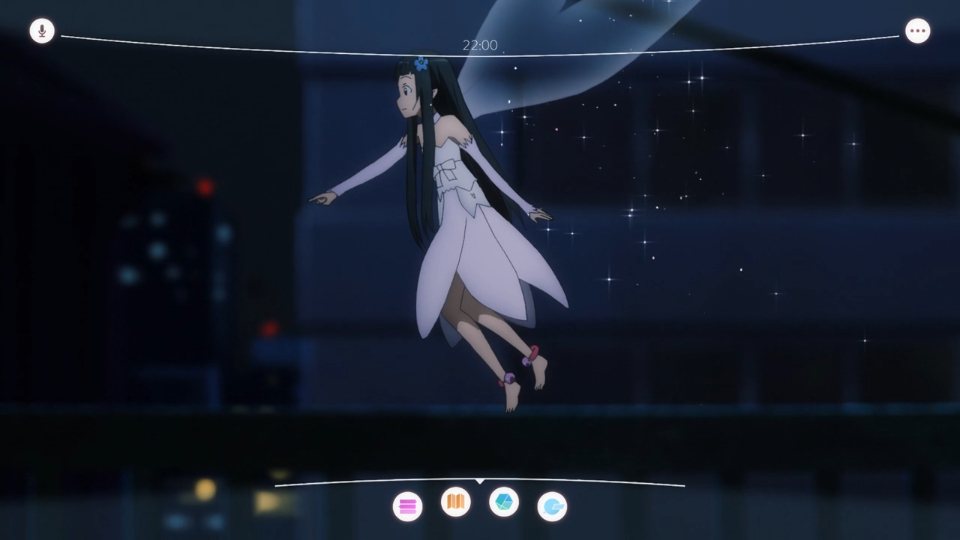 I may be the only one here who doesn’t care what happened to Kirito’s assailant. Until the show gives me reason to believe otherwise, I’m going to assume 1)Asuna called the police and 2)he’s in jail; the end.

Finally, I’m interested in the fact that Kayaba Akihito had a lover; they may have revealed that before, but this is the first time I remember it coming up. It would be easy to assume that Akihito was an angry loner who was lashing out at society, but the show has always portrayed him as more nuanced than that; granted, the dude straight-up murdered 4,000 people and viewers should always keep that in mind, but I appreciate what an interesting character he is regardless. It’s interesting how he, and his dream of an imaginary castle in the sky, continue to affect the world of SAO even years after his death.

My early reservations about this season have pretty much evaporated by now; now I’m interested to see how the Underworld plot is going to interface with Asuna’s plot. I don’t see any reason why Asuna couldn’t just visit Underworld in a dive, but in some ways, it might be more interesting if she remained separated from Kirito and had to fight her battle on a different front. We shall see. 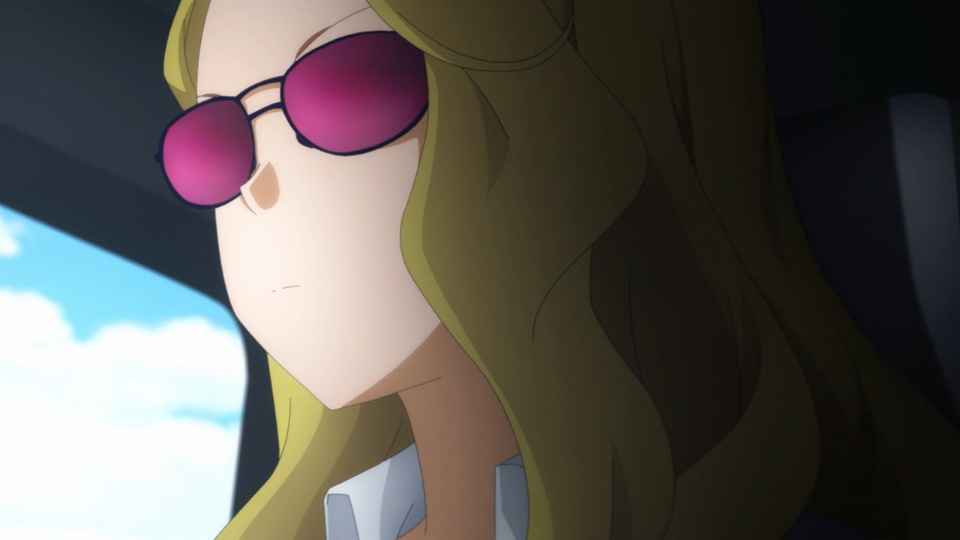 Originally, I enjoyed this episode until the last five minutes or so– though, now that more has been explained to me, I’m finding myself coming around on it.

The big issue I had when I first watched this episode was that at the very end of the episode, Asuna was able to fool top-level security checks, multiple times mind you, simply by having Yui switch the database profile photo with hers. That seemed WAY too easy for me to buy at first, but since I’ve watched this episode I’ve been told by multiple people that this is a perfectly viable way of hacking the system and it’s made even more plausible due to the fact that Yui is like a God-level AI. So yeah, never mind I guess?

Other than that, I really liked that we’re getting a break from Underworld to see what everyone else is up to. The lingering question in my mind, however, is all about the initial attack from the Laughing Coffin member that put Kirito in a coma. Was that attack pre-meditated by RATH in order to get a great test subject? Or was it just one big happy coincidence? That’s an answer that I’d really like to have about now but I’m guessing that if we ever do find out the answer, it’s not going to be for quite a while. *sighs* 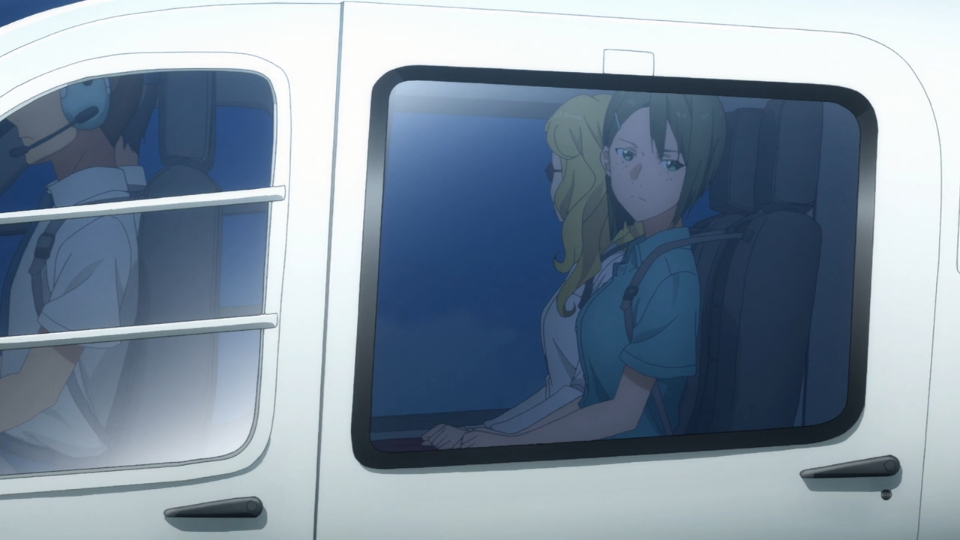 Japanese military is not what I expected when I asked to see the outside world, but it makes enough sense to me. I don’t know how well known the idea of an AI arms race is for most people. If you’ve never heard that term, take a moment to google it. It fits Sword Art Online and might give you some interesting thoughts to chew on.

Alicization appears to be Japan’s answer to an AI arms race. It brings a dozen new questions to the table, like what does Japan’s military want to do with these AIs? I’ve been speculating that Underworld is some sort of immortality project. Now that I know the government is behind it, that’s only one of many possibilities. Immortality doesn’t seem to be the focus.

For now I have more questions than answers about Japan’s AI goals. I can’t speculate past the political and economic powers of developing an advanced AI. It’s an interesting topic. Its inclusion elevates my curiosity for more world building. How do the rules the AI in Underworld live by fit into the larger goal of this military project?

The military twist is cool, but the real MVP this week is Asuna. Not only did Asuna manage to hack a Japanese government database with the help of her own AI, she located and infiltrated the naval base holding Kirito faster than he figured out how to cut down a tree! Who’s the OP one now? 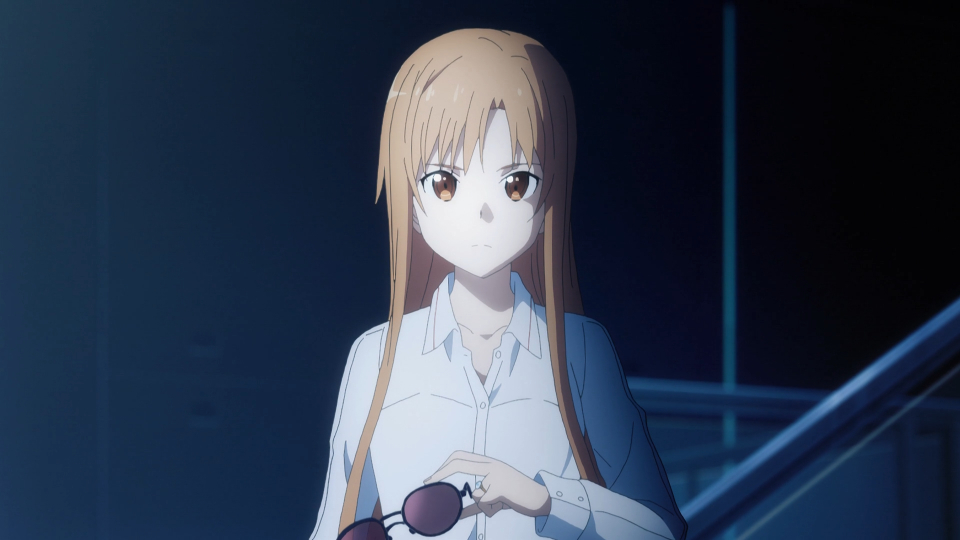 Episode 5’s portrayal of hacking was fantastic. Step 1: Change the picture in a database. Step 2: Walk in and pretend like you belong until you do your thing. I appreciate how down to earth that is. No fancy pseudo-science hacking magic, just some plain old BSing.

Speaking of BSing… Whatever happened to the guy who stabbed Kirito? The story hasn’t acknowledged his existence beyond what he did in episode one. Did Asuna go into berserker mode and beat him senseless? Did that stab wound from Kirito somehow take him out? Maybe a wild AR Pokemon hacked into his brain and put him into sleep mode until the plot remembers his relevance? I don’t need that explained now, but it feels odd that it wasn’t mentioned.

I felt like this episode did a great job of bridging Kirito’s stabbing and catching us up with Asuna and friends. I wonder if Asuna will be able to jump into Underworld? But I need more information to speculate the purpose of Underworld. Developing AI makes sense, but why is Kirito needed? Maybe that’s Kikuoka’s whim more so than anything else? The episode title for next week leads me to believe we will get some more answers ASAP. I can speculate more after that.