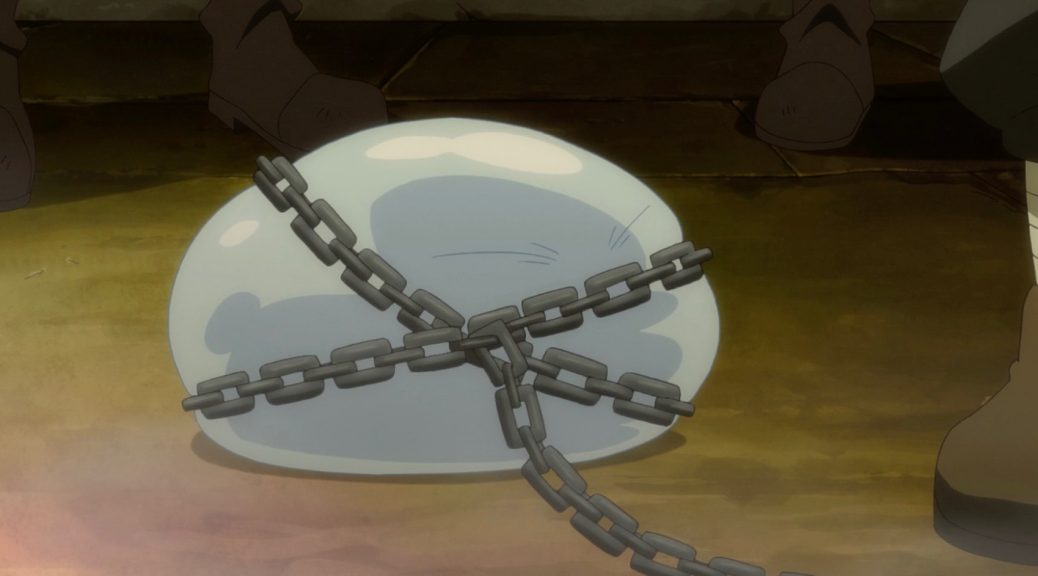 After last week’s lackluster episode, it was a nice surprise to see the show mix things up this week. Rimiru gets put into situations where his Godlike combat abilities don’t really help him, and it’s interesting to see him muddle his way through problems where there’s no easy win button.

Unfortunately, we start off the episode still inside the Elf Hostess Club, so there’s a little bit more about how boobs are just the greatest thing. Look, if you’ve read anything on this blog before, then you probably know I’m not against fan service on general principle; it has a role to play. If an entire scene is just fan service and has little else going on though, I start to get bored. This whole Elf bar is basically just Rimiru thinking to himself “OMG I really like boobs,” and it’s old already. There are seriously like 40 characters pictured in the OP who haven’t even been introduced yet, we don’t have time for this nonsense.

Anyway, finally we move on from cleavage when one of the Elves offers to tell Rimuru’s fortune, using a crystal ball, and shows him the one he’s “destined to be with.” I could complain that having a fortune teller introduce the female lead this way seems like lazy writing, but let’s see what happens; maybe not all is as it seems. It could be that Rimiru is “destined” to be with this girl in a different sense than the one he’s imagining. In any case, the girl we see is likely the girl who we saw in the first scene of the anime during World War II, so I’m glad the show has remembered that she exists. I really am curious what her deal is. 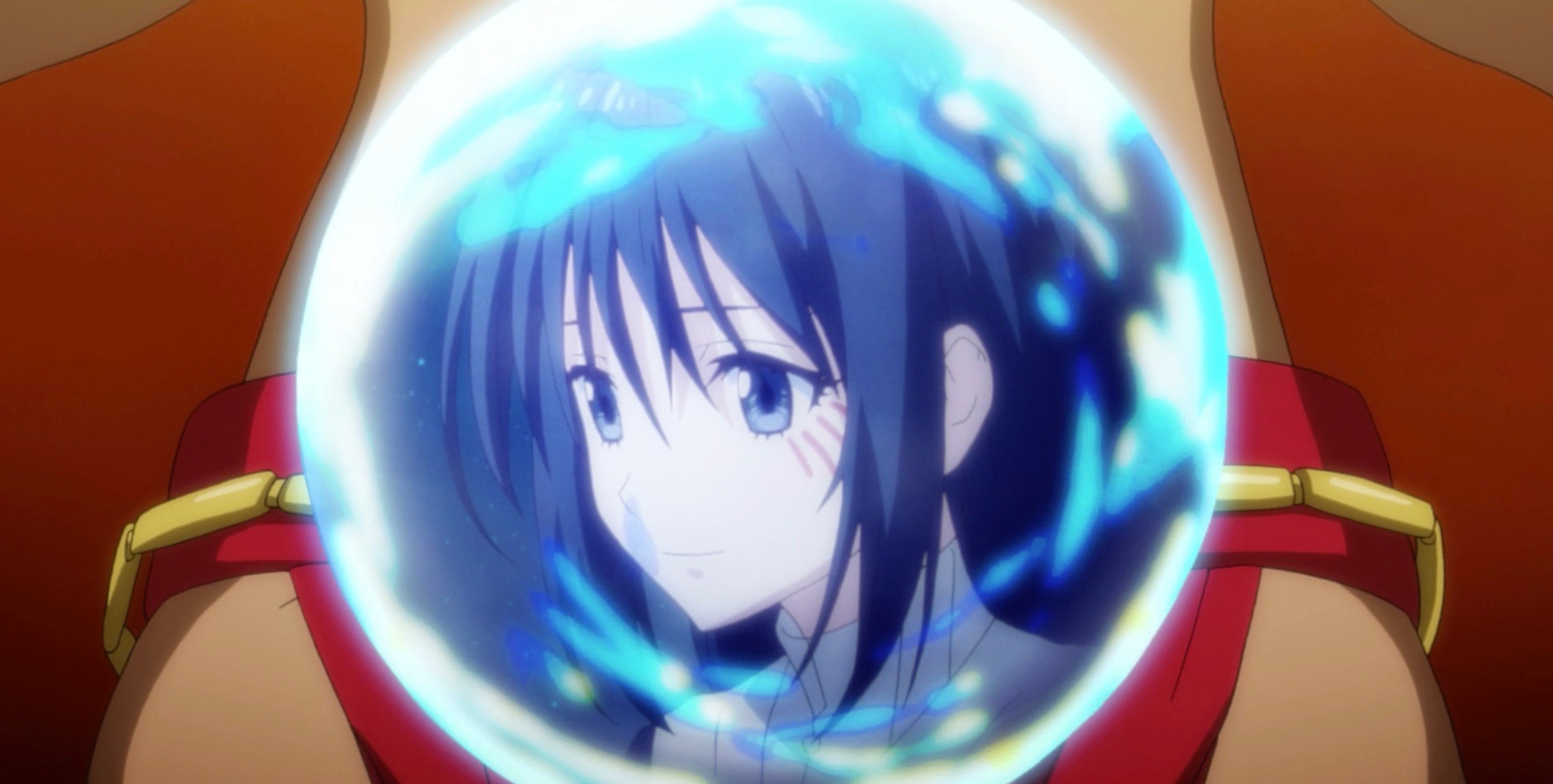 Then we meet evil minister Vesta, sworn enemy of Kaijin, Rimiru’s Dwarf blacksmith friend. Vesta is making a big show of being annoyed that Kaijin dared bring “a monster” into such a fine drinking establishment, then dumps his wine over Rimiru’s head as an insult. What’s worse is, he does it with no regard for the Elf girl who’s lap Rimiru is currently sitting on. It’s good to know that Vesta is the kind of guy who’s mean to people in the service industry for no reason, because that means I don’t need to have any sympathy for him whatsoever. Kaijin tries to argue later that Vesta actually isn’t such a bad guy, and Rimiru and I are both like “I’m going to stop you right there.”

Thankfully, Kaijin is even more offended by this behavior than I am and punches Vesta hard in the face, twice! Rimiru advises Kaijin “Not the face! Go for the body!,” which made me laugh out loud, because that’s exactly the kind of advice my Mom used to give me in case I ever needed to beat someone up in school. Look, there were bullies, okay? It was self-defense. Realizing he’s probably just ended his career in Dwarf Kingdom, Kaijin offers his services as a craftsman to Rimiru, who’s of course all for it. That’s awfully convenient for our favorite slime, but if it keeps the plot moving (and gets us out of the friggin’ Elf bar), I won’t complain.

The camera slows down just to make this punch extra satisfying. Thank you, Mr. Director.

Apparently you can’t just go around knocking out political officials in this world, or anywhere really, so Kaijin, Rimiru and co. all get thrown in jail. Kaijin exposits about Vesta’s dark history with the Magisoldier project, which looks like some incredibly messed up piece of quasi-demonic engineering. Seriously, this episode of That Time I Got Reincarnated As A Slime became Evangelion for about five seconds there, and I was confused, but pretty into it. Anyway, Vesta is still steamed that he failed in creating Eva Unit 01 and blames Kaijin for it, hence their beef. Interesting world building, although I’m not sure it entirely jibes with everything we’ve seen so far. For one thing, they have lab coats in this world? Seems kind of anachronistic.

Our heroes get thrown into a ridiculous kangaroo court, where even their representation has been bought off, and it looks like everybody is about to sentenced to decades of forced labor. I think the Dwarven Kingdom is supposed to be relatively advanced compared to the rest of the world in this anime, but damn, their justice system still needs some work. It doesn’t end up mattering though, because the Dwarf King, Gazel Dwargo, sees through all the nonsense and changes the sentence to simple exile, which allows Kaijin and co. to start a new life away from Dwarfland and their stupid shadow- military-industrial complex. Yaaaay monarchy! This may seem like proof that Dwargo is benevolent, but as we soon learn, Dwargo knows who Rimiru is; it may have been a defensive move. Because if he and his friends got unfairly sentenced like that, I really can’t think of anything that could stop Rimiru from Water Blading everyone in the room to death.

Gazel Dwargo is kind of like one of those grand kings from Game of Thrones, only– you know– competent.

I really like the fact that actions have consequences on this show, even seemingly small ones. Apparently Dwargo was clued into Rimiru’s significance by the fact this random slime just conjured a bunch of 100% effective healing potion effectively from nothing; people should take notice of that sort of thing. In most anime, I think creating that bucket of healing potion last episode would have been completely forgotten, but not here.

Minister Vesta gets his just desserts, since Dwargo is on to him and is pissed off that his relationship with Rimiru, Slime God, got off on a bad foot because of all this silliness. Maybe Vesta will learn to be nice to waiters now, but I doubt it. Anyway, since Kaijin’s friends are all coming along for the ride, Rimiru has accomplished his goal of acquiring Dwarven craftsmen, and is ready to head back to Goblin Village. 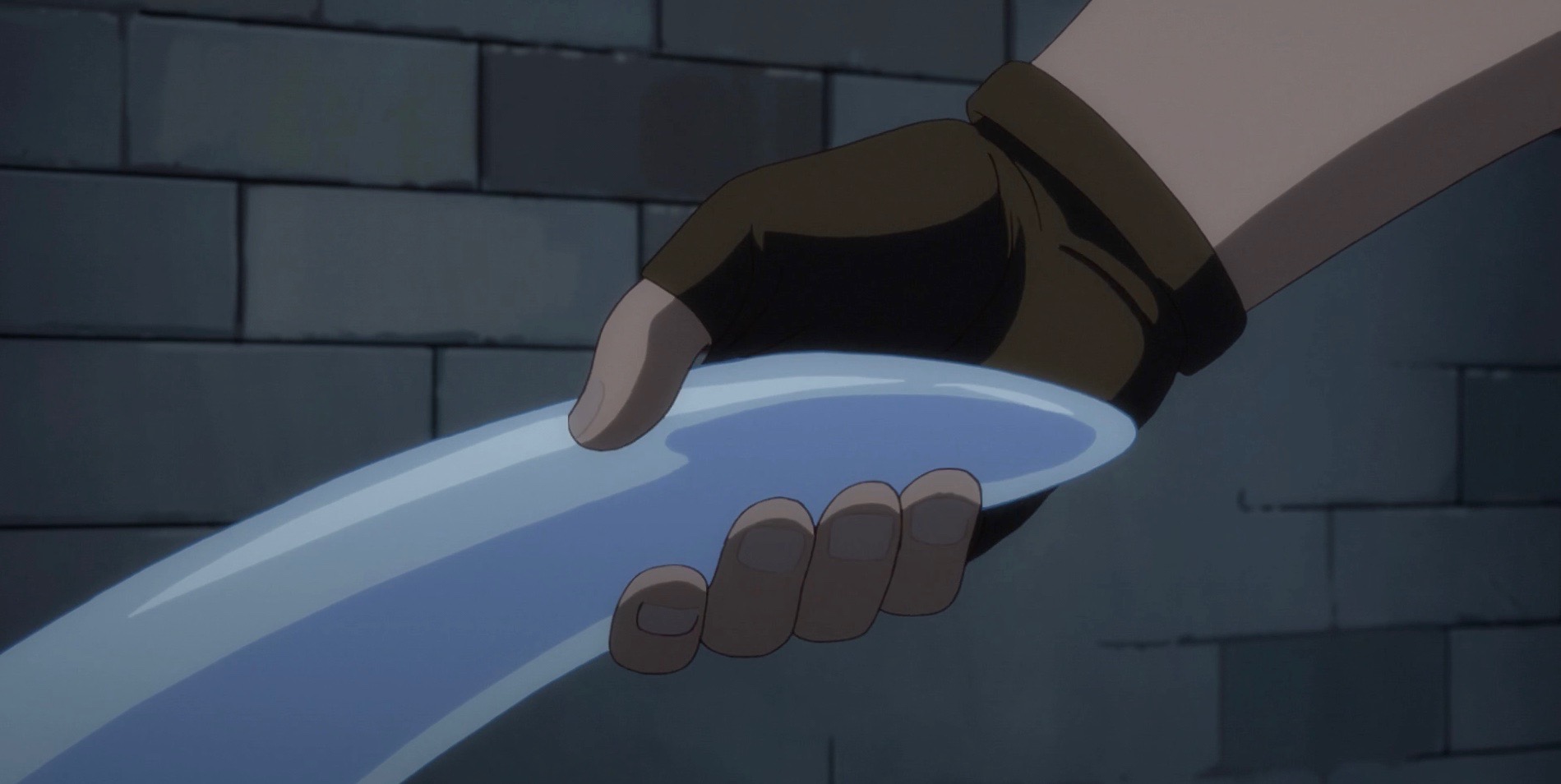 Damn, the first five minutes of next episode are probably going to be spent on the dwarves ogling the curvy female goblins, won’t they? I really hope not, but I think I know which show I’ve signed up for by now. I’ll have to steel myself to resist this shameless pro-boob propaganda.

2 thoughts on “That Time I Got Reincarnated As A Slime, Episode 5”