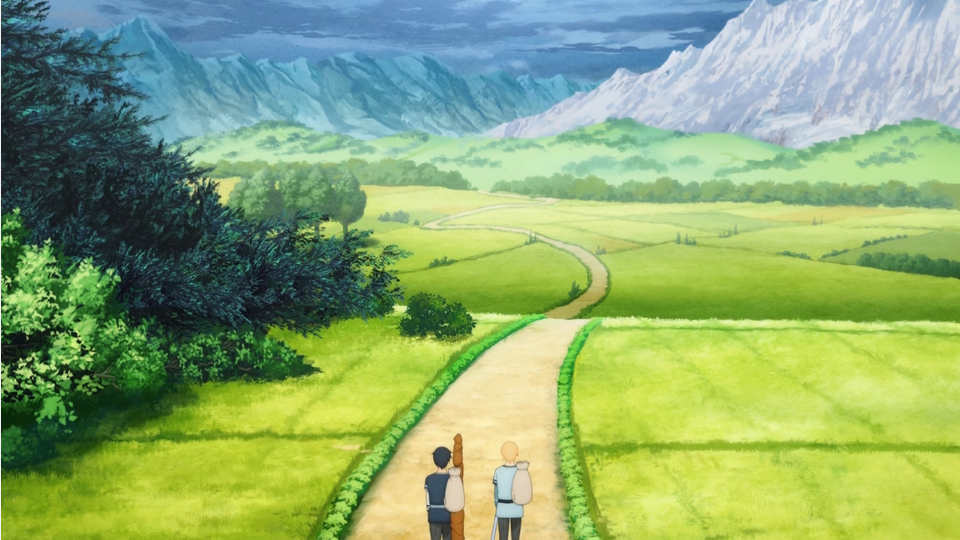 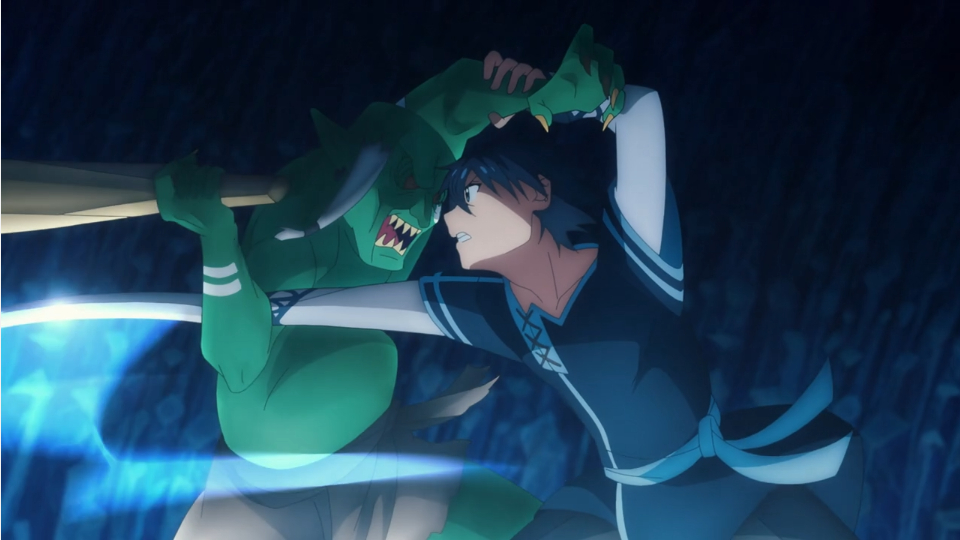 That’s all I could say to myself as I watched the latest episode of SAO. Finally we got the action sequences that fans have come to expect from this series, finally we saw the damn Demon Tree felled, and finally, we saw our heroes embark on what I’m certain will be an epic journey. At least it had better be, or else I’m going to be one unhappy puppy. I quite liked this episode since it moved the story along so strongly. Things actually happened in this episode which made me want to pay attention to all the things.

There are still a ton of questions that need to be answered (many of which were originally raised by the opening animation rather than the episodes themselves, which is strange). My prediction is that eventually, we’re going to get to the big city and learn that Alice isn’t dead but has actually been drafted into the Integrity Knights. I have no idea what is going to happen beyond that (and I don’t even know if I’m correct or not) but I know that for the first time in a couple of weeks, I’m genuinely excited to find out. 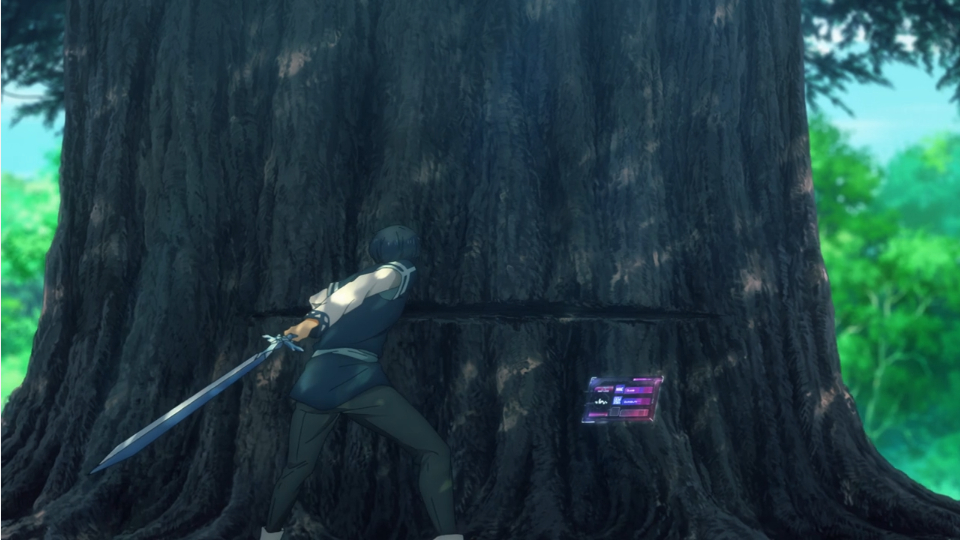 Wow, this episode did everything but give you a mug of hot cocoa and a backrub after it was over. A cool fight, everyone now remembers the stuff from episode one, significant plot advancement, and the demise of The Tree That Could Not Be Cut? What more could you ask for?

I do have a bit of a problem with reminding myself that the violence is not “real”– that is, even though they’re in a very realistic virtual world and Kirito feels pain, they’re still not in reality. I kept thinking during the fight that Kirito shouldn’t be able to take as much punishment as he was taking and still be able to keep fighting at full strength, but when you remember that it’s a virtual world, it makes sense; in most games, as long as you have 1 HP, you can function as though you’re perfectly healthy. Kirito may have been down to about 250 HP out of 1128 or something, but he didn’t die, so he was still functional. 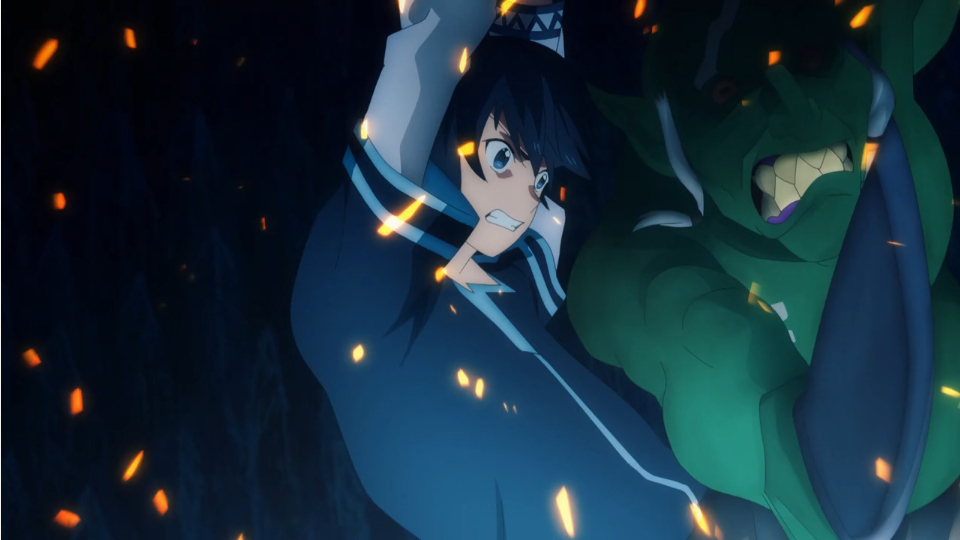 We know from Ordinal Scale that Kirito is limited in Augmented Reality compared to full VR, so it makes sense that his battle performance in this setting is that of his video game avatar, since this is a full-dive situation. However, the fact that he has such detailed sensory input makes it more akin to AR than his previous VR fighting experience, and I hope that’s something that the show explores in more depth.

On the subject of the battle, that was some quality fight choreography and animation. It’s easier to forgive the talkiness of the last two episodes knowing that the show had such an ambitious action scene coming. Now, after this season, I could do with never seeing any frickin’ goblins ever again, but if I have to see goblins get beat up, this is the kind of style I want to see it in.

One thing that I found interesting was that Eugeo remembered Kirito when he was on the brink of death. The implication is that Artificial Fluctlights have the same “life flashing before my eyes” experience that real people do when they’re approaching death. If Eugeo’s memories of the Kirito of his childhood were overwritten by the System (which appears to have been the case), this is another example of the human soul overpowering computer programming. We saw this as far back as Aincrad, when Asuna was able to shake off a status effect through sheer force of will to save Kirito, so this is something that’s always been part of the show, for better or for worse. In fact, I wonder if this arc is going to take that aspect of the original SAO story (which many viewers saw as a weakness), and fully develop it.

Of course, there’s a danger of an overly optimistic/Care Bears sort of message here, like “not even computer programming is powerful enough to overcome the will of the HUMAN SOUL!!!!!” but I trust Reki Kawahara (at least at this point in time) to be a little more nuanced than that with his writing. I think the struggle of the Artificial Fluctlights to gain control of their lives is going to end up being more complicated than “Believe in yourself,” or rather “Believe in the computer code that makes up your soul!”

Otherwise, it was interesting to see how the villagers reacted to the unexpected felling of the Demon Tree. I thought they’d be scared of change, but for them, the task of evaluating anything has been outsourced to the Taboo Index, so it doesn’t even occur to them to be scared of change. I mean, if cutting the Demon Tree down a few hundred years early was a bad thing, it would have said in the Taboo Index “don’t cut down the Demon Tree early,” right? I’m interested in seeing more about how judgement and morality works in this world where all their rules are put down in black and white.

Yes it is obviously similar to real-life religion, but different in the sense that there’s no possibility for dissent. Every text-based religion (that I’m aware of, anyway), has it’s own disagreements in regard to interpretation, but as far as we can tell, there are no Rabbis arguing over the true meaning of the Taboo Index; it’s simply taken completely at face value. I wonder what it says about me that in an episode devoted mostly to hacking the limbs off of goblins, my main takeaway is “Ooooh, it’s like the age of the Great Rabbis without Talmudic Commentary!”, but whatever; I’m enjoying myself. 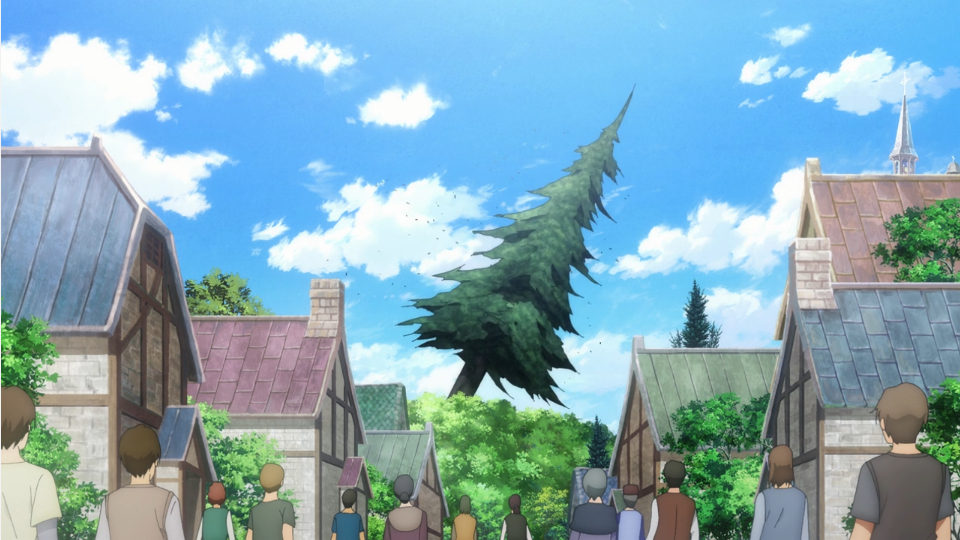 Episode four wrapped up the “leaving home” stage of Eugeo’s adventure in style. The goblin fight was fantastic. The ebb and flow of Kirito crossing swords with the goblin leader and his hoard made every hit exciting. And hey, Eugeo is actually important after all. He may have almost died, but in the scheme of tragic Sword Art Online moments? It felt good to see him make it through the fight.

The hook for Alicization is finally in full bloom, and now that it is I’m excited to see where it goes. Sword Art Online has had moments in the past where it felt like an adventure, but never like this. It’s given supporting characters important roles, but again, not quite like this. Eugeo is the hero and Kirito is taking on the role of mentor.  It’s neat to see SAO breaking away from the new-heroine-of-the-week style if only in a small way.

The way Underworld is hyper realistic in tangible sensation, but still gamey at it’s core is interesting to me. Kirito’s injuries during the goblin fight are a new kind of problem for him because of the pain. Ultimately the injury isn’t such a big deal; same for Eugeo. He takes a hit that should kill him and some durability sharing fixes the issue. As realistic as it all feels, this world runs on numbers in the end.

Now that Kirito and Eugeo have launched their adventure, I want to see things from Asuna’s perspective. I hope we get to see more of what’s going on outside of this virtual world. The timing is appropriate; Kirito and Eugeo’s adventure is off to a strong start. Now please tell me why Kirito is stuck in Underworld. Asuna did promise to follow Kirito anywhere. She also knew a whole lot about the origins of Alice in Wonderland. Tragic tone setting or subtle foreshadowing? I’m not sure yet.

Perhaps the most satisfying element of this whole episode was the end of our dear friend, the Demon Tree. I didn’t realize how much I wanted that thing gone until I felt like standing up to cheer when Kirito finally landed a good hit on it. The story even gave Eugeo the role of finishing it off. It was his task, and he handled it. 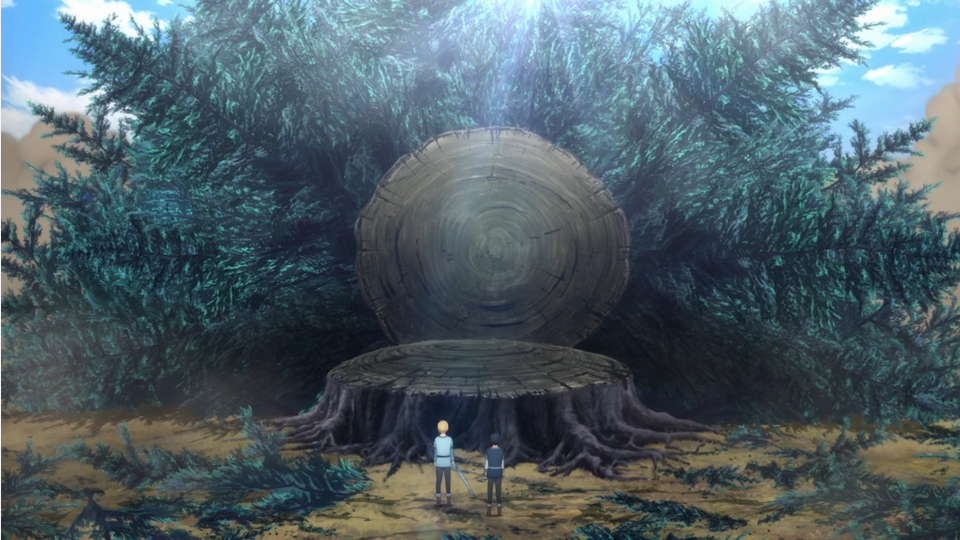 I know it’s a popular thing to act like SAO’s storytelling hasn’t improved since the Fairy Dance arc. I disagree, but will admit Gun Gale Online and Mother’s Rosario were both far from the death game promised in Aincrad. I can argue till I’m blue in the face that even SAO’s worst arc still hits good emotional notes, but… that doesn’t and won’t make it what people wanted or expected from the series.

Alicization seems to be building on the themes it explored in Mother’s Rosario. Especially in the sense of finding ways to create a virtual reality fantasy that is more than a game. It’s what I want from SAO, but I wonder how other long time fans feel about this narrative focus? That’s become a more interesting question as the direction of this arc becomes clear.

If nothing else I feel good about the storytelling of Alicization. Episode four had a great fight and hit all the right emotional notes. I can’t wait to see where it goes next. I hope other fans are enjoying it as much as I am.