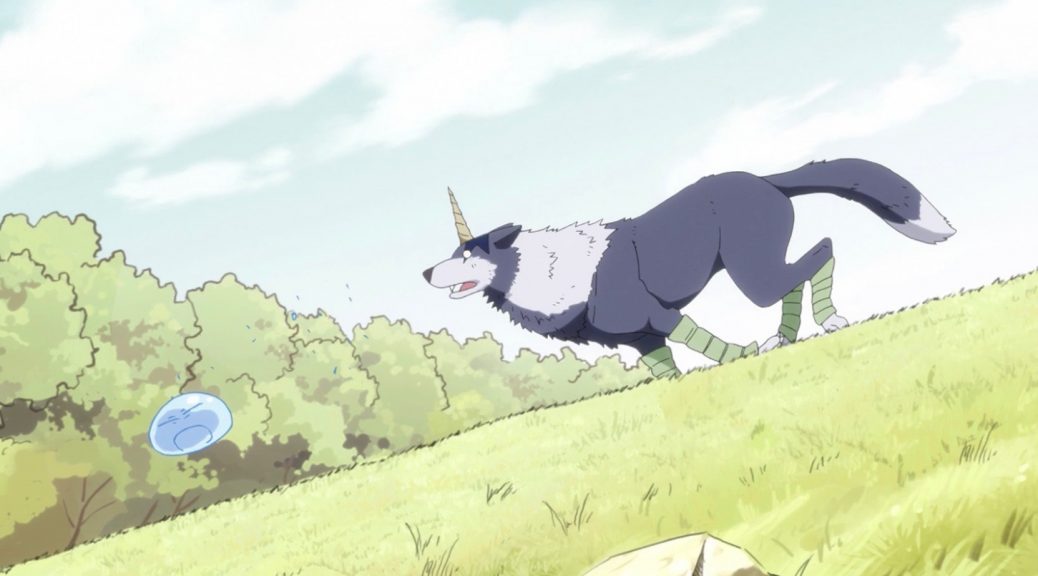 Last time, I said that Rimiru could just take on all the Direwolves himself while the goblins just hang out, and that’s…basically what happens. Except instead of defeating all of the wolves, Rimuru kills (and then eats, of course) their leader, and the rest of the wolves pledge allegiance to him. You’d think King Direwolf’s son would feel some anger towards Rimiru for killing his father, but there’s no indication of that. I’m guessing Daddy Direwolf must have been an abusive parent and general-purpose asshole that no one liked.

The fate of all who go up against Rimiru, the Slime God. Daddy Direwolf really should have picked a more reasonable opponent, like a Leviathan or the Antichrist or something.

The “battle,” for what it’s worth, does give us a chance to see some more of the skills Rimiru’s picked up, but I’m concerned about something: that Water Blade skill is lethal. It seems like as long as Rimiru has Water Blade, all of his other skills are kind of unnecessary. I mean, Rimiru is supposed to be overpowered, that’s kind of the point, but it’s not as much fun if he can just behead any opposition with the same attack whenever he feels like it, you know? Unless you really like seeing monsters beheaded, then I guess it’s pretty fun?

I wonder if this little girl is thinking “Great, I get to have boobs now!”

With peace established, Rimiru combines the Direwolves and the Goblins into one tribe, which seems like a risky plan– I’d still be kind of worried about the Direwolves eating the goblins, personally– but because Rimiru is literally worshipped as a God at this point, he makes it work. Then he names them all, and the way this show handles names is interesting to me. There’s the videogame-aspect, which is that a named monster in a JRPG will almost always be more powerful than a generic one, and the show pays homage to that. But there’s also the whole Old Testament angle, with names (and language in general) being imbued with the power to create the world. Since Rimiru’s effectively a God now, he doesn’t just name the Goblins, he creates new creatures by virtue of naming them. 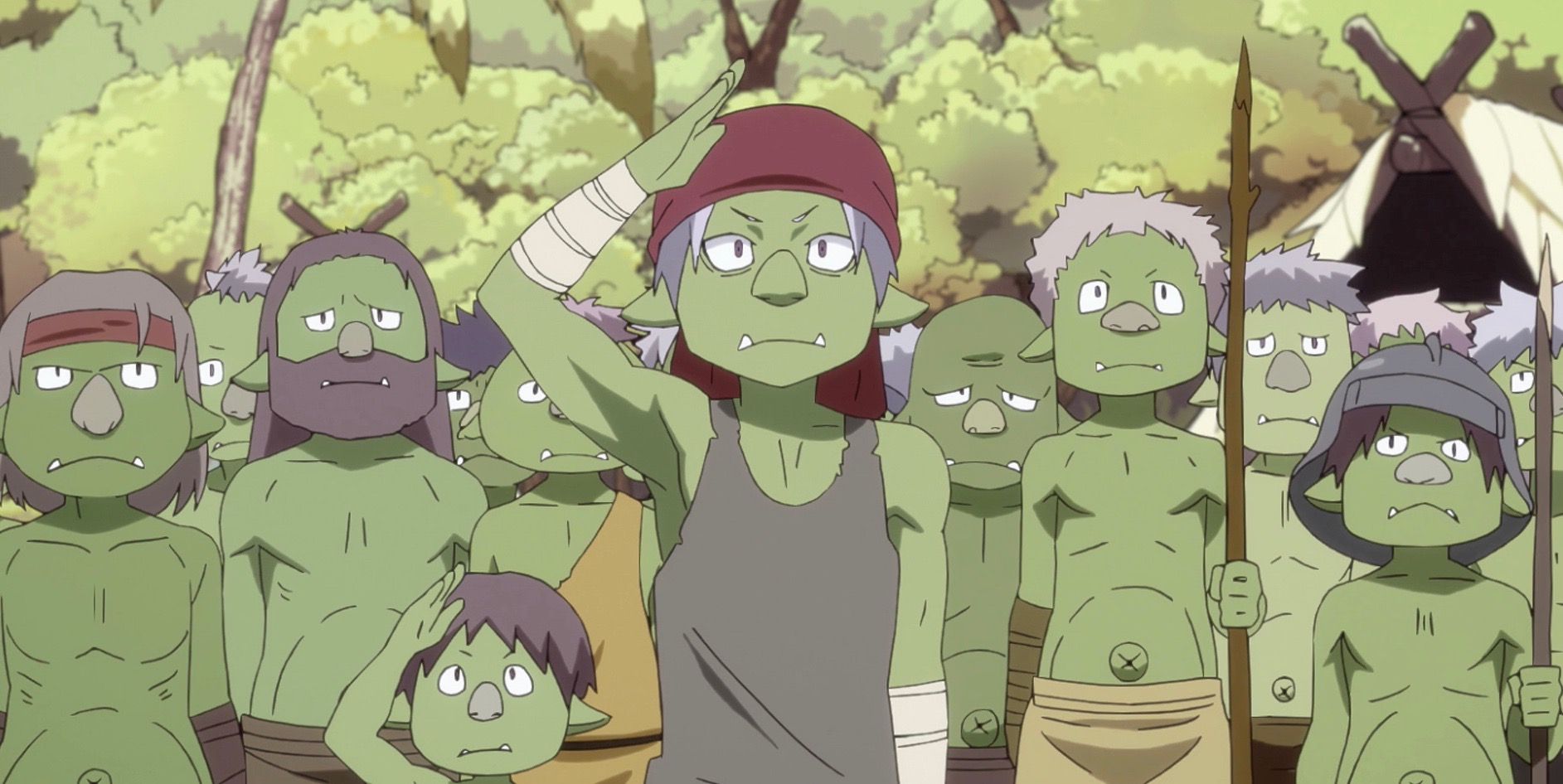 It’s a little hard to explain. It’s not that this story is making any kind of deep point about religion or anything like that, but I like the fact that it runs on a few levels at the same time.

Just when we were beginning to think Rimiru’s crazy God Magic was limitless, he runs out of magicules and needs to take a breather for a few days. While he’s unconscious, all the cute kid goblins level up (thanks to the naming) to become incredibly ripped and/or curvy adult goblins. I’m kind of torn about this; I mean, I know the internet is happy that we’ve got smokin’ hot goblin babes for waifu purposes now, but I liked the little kid goblins! I wanted to cuddle them and tell them bedtime stories. They grow up so fast…. 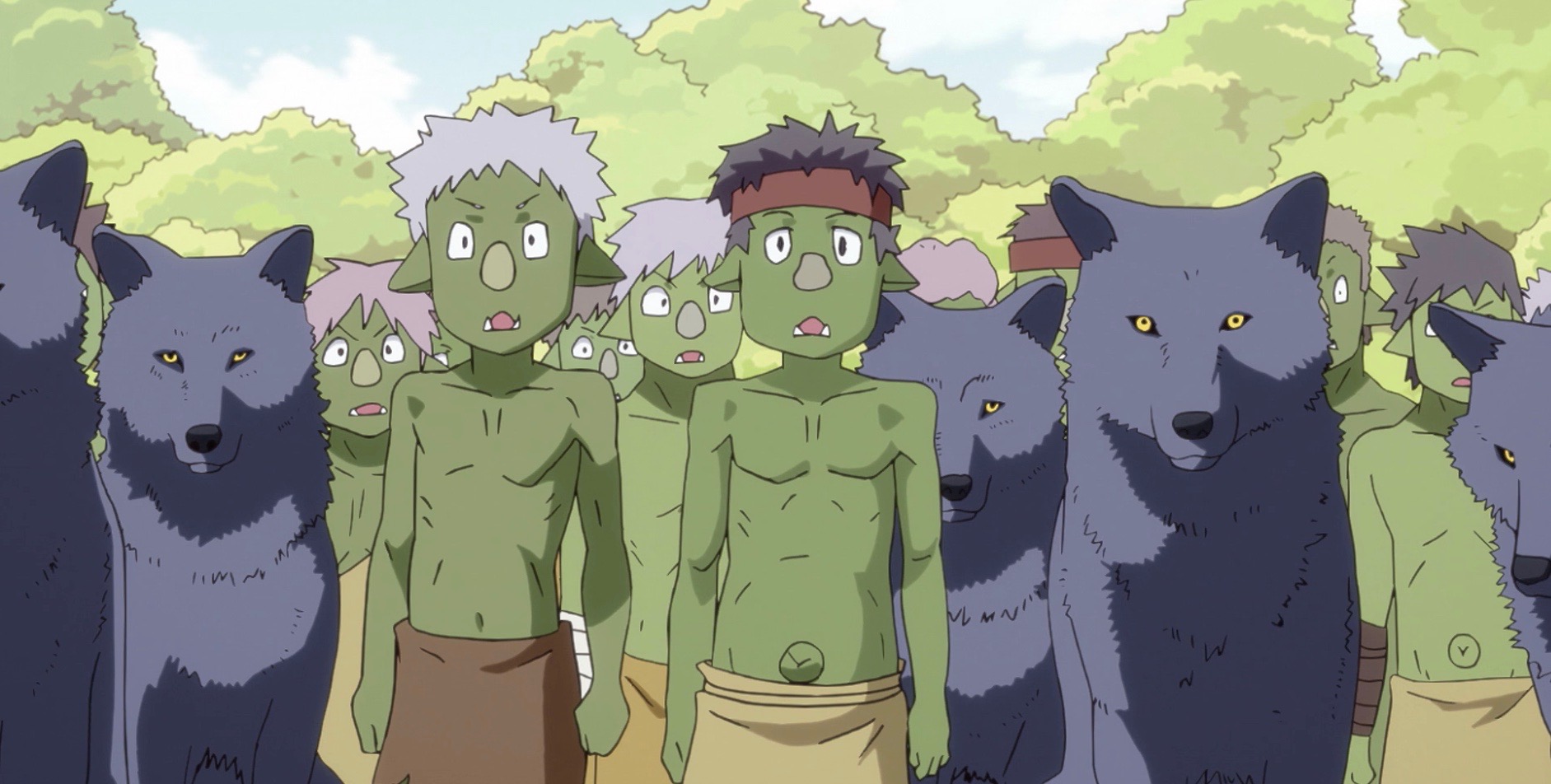 Give Peace a chance, especially if your ancestral enemies are actually dogs that wag their tails when they’re happy.

One of my favorite bits is when Rigur, the chiefs son, asks Rimiru why he has commanded the Goblins not to attack humans, and Rimiru responds “Because I like humans.” I wish he’d just left it at that, but being a reasonable sort, Rimiru goes on to give an actual explanation. It just seemed like a really good place to go with “Because I said so.” 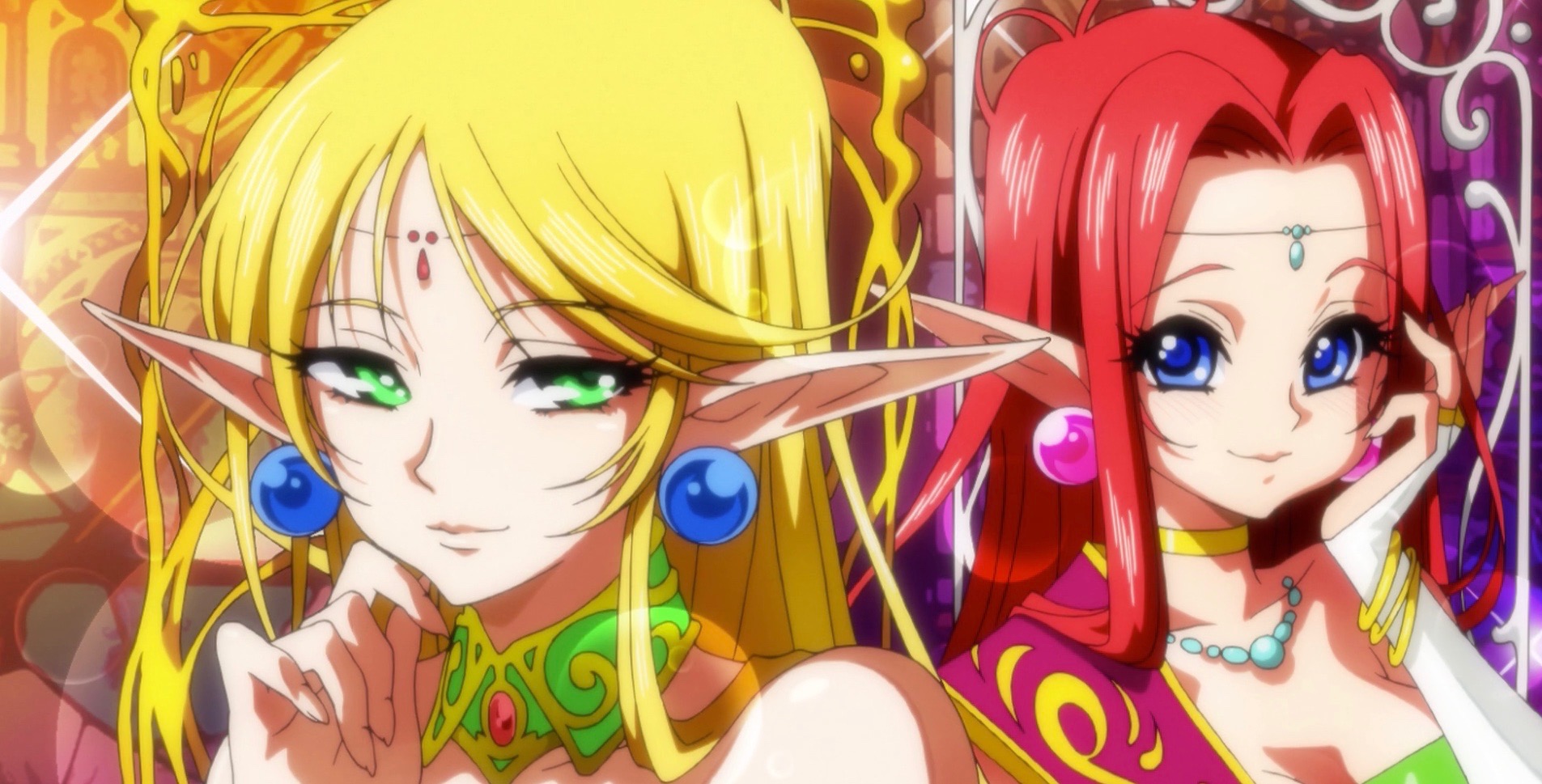 I’m going to go through this one kind of fast, because I wasn’t that keen on this episode.

Since goblins are terrible at carpentry and tailoring, for some reason, Rimiru needs to head off to the Dwarf city to find some craftsman to improve conditions at Goblin village. I think I would have liked it better if goblins could do these things before, but after they transformed, they no longer have the dexterity to do detail work with their giant sausage-fingers; oh well. 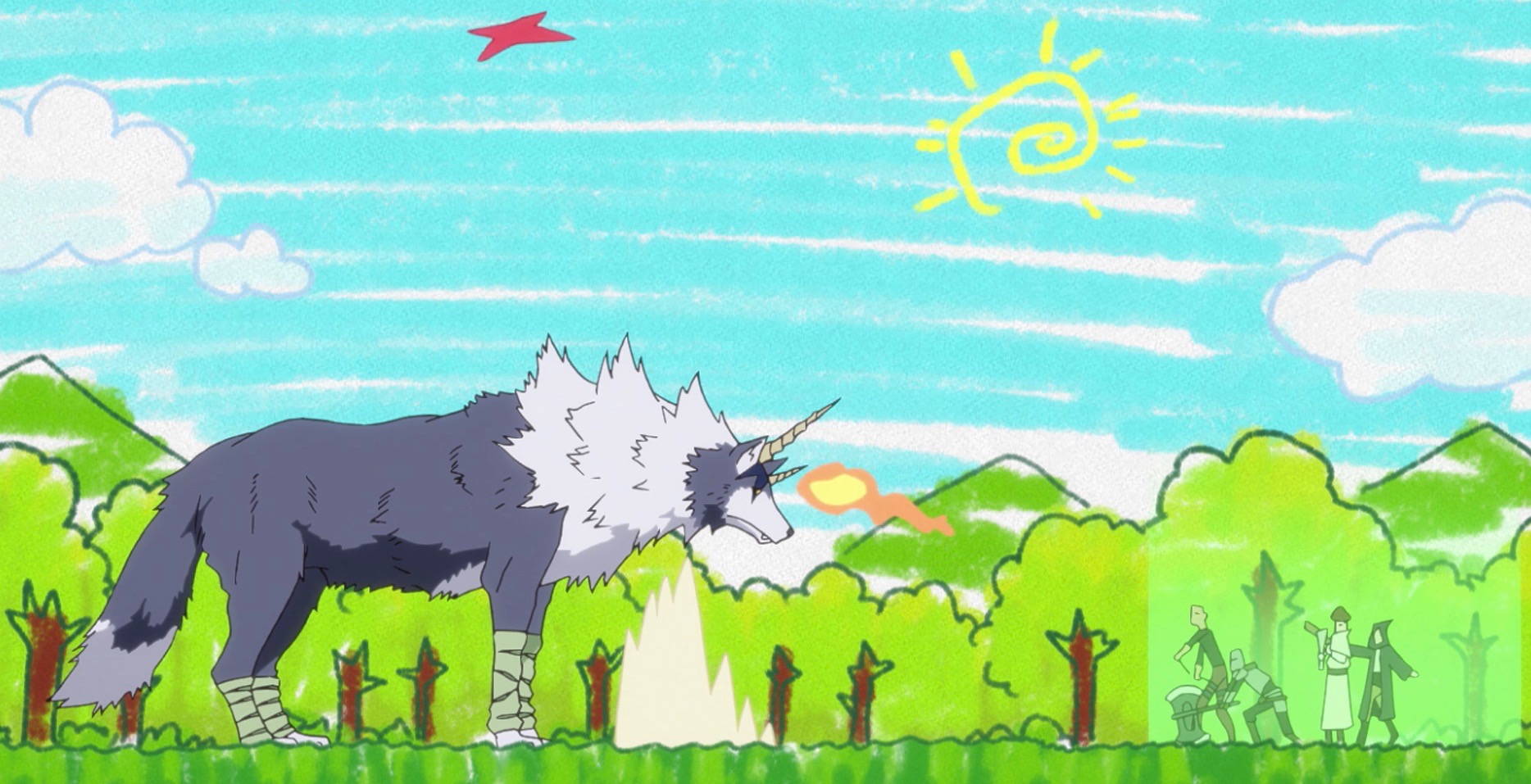 This party of adventurers proves a challenge for our hero, hah hah no they don’t they’re useless cannon fodder. The imagery is cute though.

No matter how ridiculously OP Rimiru is, he still looks like a weakling monster at first glance, and this continues to cause him problems. So there’s a big tiresome fight at the front gate of the Dwarven city, he and Gobta get arrested, and so on and so forth. Rimuru wins the affections of the Dwarves by creating healing potions, but I’m confused; didn’t Rimiru use up his supplies of healing potion by healing all the injured Goblins in the last episode?

With how over-detailed this show has been on mechanics, I kind of expect to know exactly how many healing potions Rimiru has available at all times; one problem with constantly giving all of this game-esque status info is that the audience starts to expect it…or maybe that’s just me.

Then there’s a whole boring part where a blacksmith needs to make swords, and Rimiru can make swords for him in exchange for craftsman coming back to Gob village, blah blah blah this part is so boring. I mean, I kind of like the idea that Rimiru’s early game “grinding” ended up being so useful– basically, he broke the world by overleveling early, which is what I usually do in a JRPG– but I just don’t care about the Dwarven military cause or whatever. 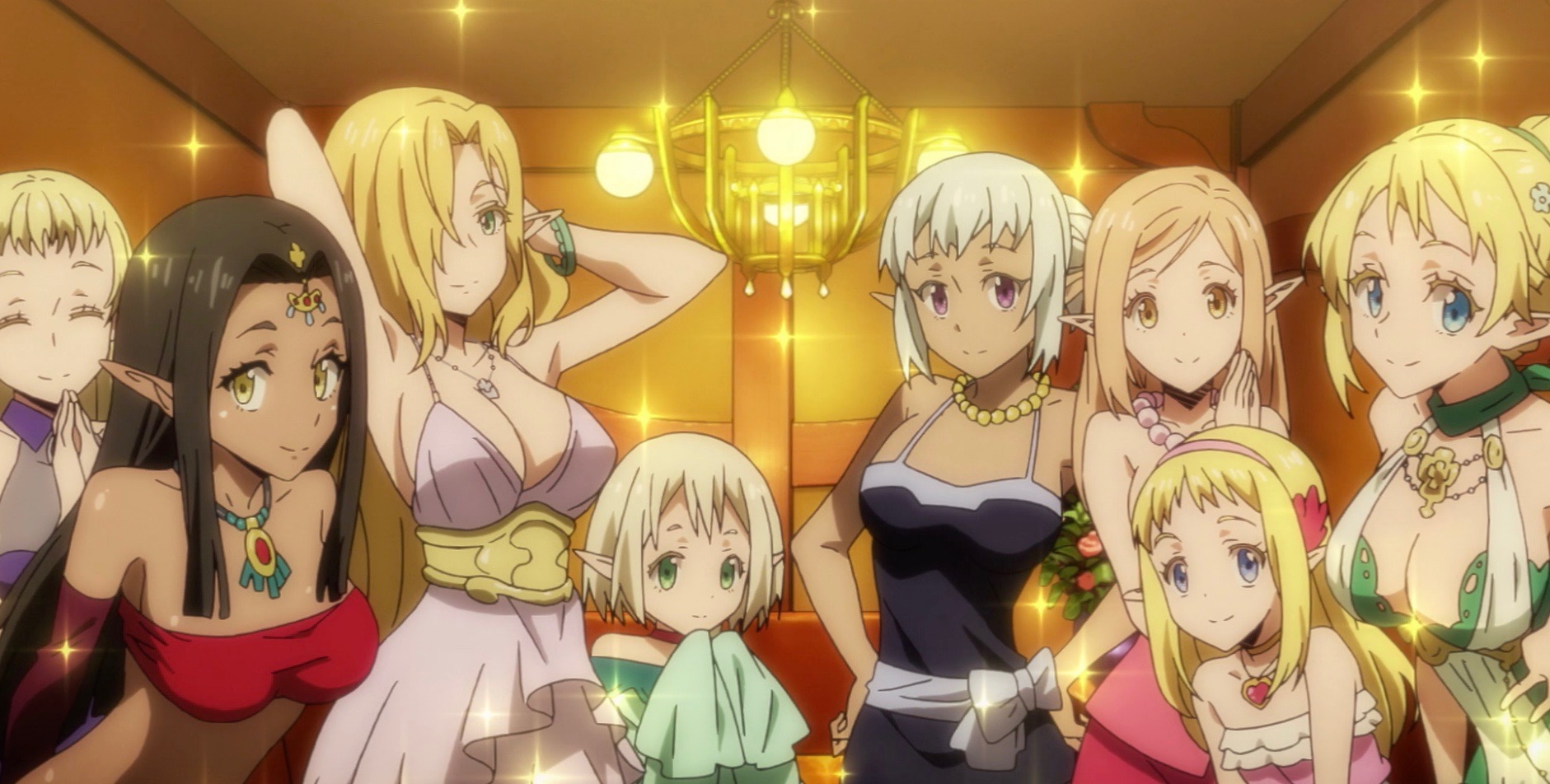 Then to reward Rimiru for all his help, the Dwarves take Rimiru to an elf , I mean, bar. It’s a nice touch that all of Rimiru’s fantasies of elven girls in this episode look like they come from ’90s OVAs, which is when Rimiru’s human form would have been a teenager and hence discovering sex; impressive attention to detail. However, I’m not sure I’m too keen on the introduction of Elven sex workers, that just seems kind of depressing.

Wait a minute though– isn’t assuming the elves are unhappy because they’re sex workers inherently anti-feminist? If they have agency, perhaps they’re making the choice to work in this industry, and are reasonably happy in their chosen field? Perhaps I’m the real sexist for condescending to feel bad for them in the first place? I’M SO CONFUSED.

Hopefully, next episode will deal with Rimuru eating more cool monsters and their friends, and less blacksmithing and weird sex stuff.

5 thoughts on “That Time I Got Reincarnated As a Slime, Episodes 3 & 4”