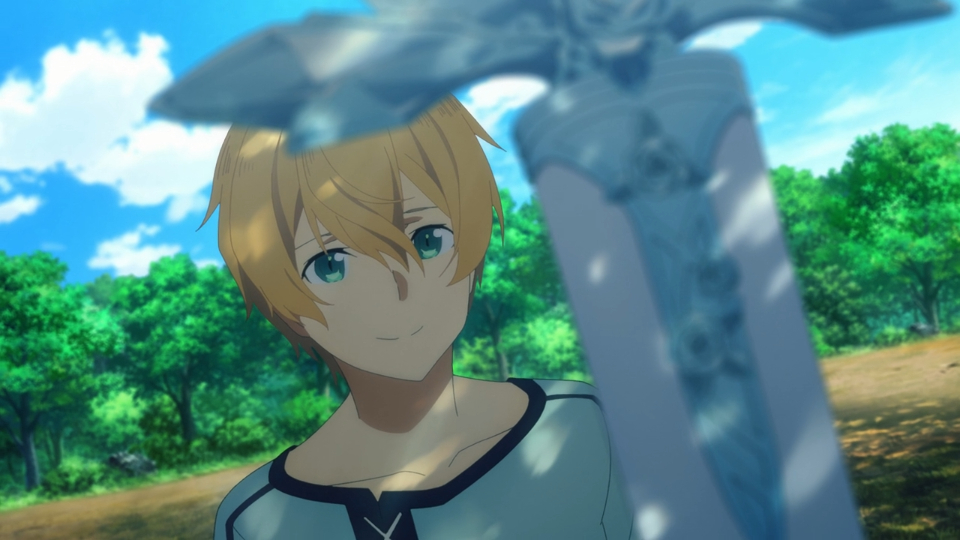 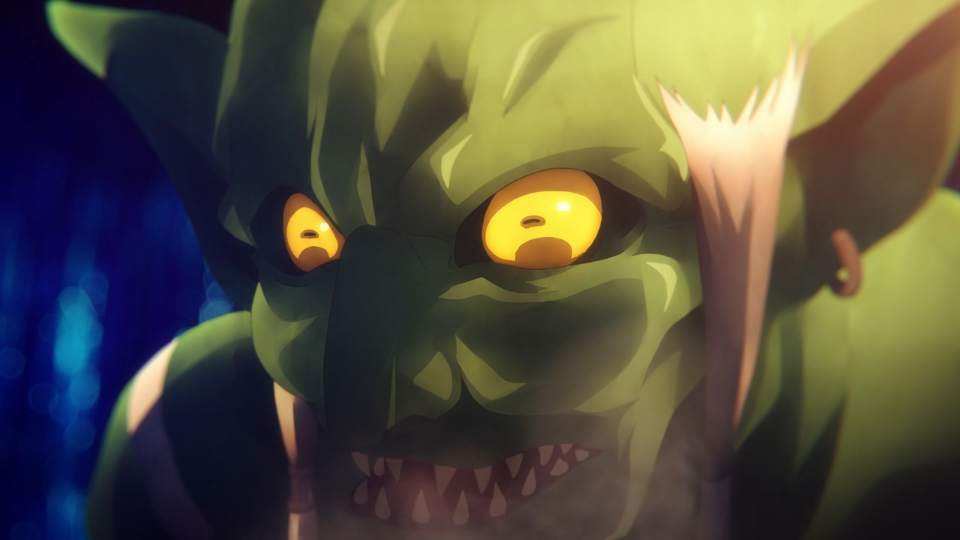 First off, let’s address the elephant in the room: What is Japan’s obsession with goblins right now? They’ve appeared in at least three series this season alone. Is this Japan’s new shiny toy?

Getting to the actual episode, I have to admit that this season of SAO is moving way too slow. I realize that they have over fifty episodes to fill this time around, but can we please get some action sequences that don’t involve a big tree? The only time Kirito has held a sword this season is to attack wood, and that just doesn’t have the same impact as when he’s in a real fight against another person.

The whole story with Alice and Eugeo is proving to be a slog in the early going. I’d love to say that my endless love for SAO can get me through this early bit of story set-up, but the sheer amount of exposition we have to sit through is proving to be a bit much.

Here’s to hoping that things turn around quickly. 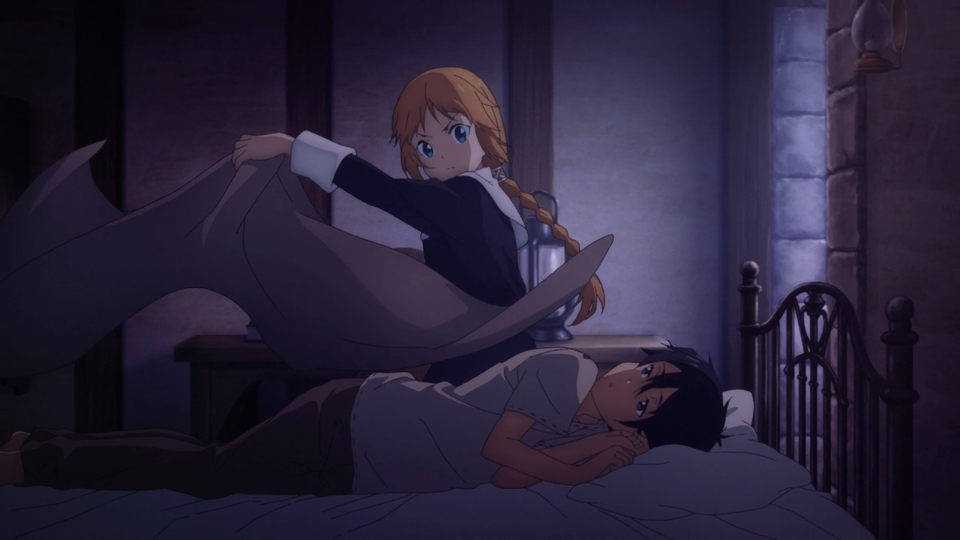 Good lord, Kirito take down that tree already, I’m sick of looking at it! Better yet, Eugeo should take it down. That’s the better path forward, and the one I hope this arc takes if we have to spend another minute staring at the thing.

Sure, if Kirito goes into OP Jesus Mode and takes down the tree like it never mattered, that’s a lame end for the tree. But who cares about the tree? Okay, so half the anime fandom will work itself into a frenzy if Kirito kills that tree with a single sword skill. My opinion? Worth it.

Even if Kirito does take down the tree in a single hit on his way back to town, you won’t hear me complain. “But Lifesong,” you say, “we don’t want to see Kirito be all OP, OP protagonists are boring!” No, you’re wrong. Not about OP protagonists, but about the way this story is treating Kirito.

Kirito isn’t the hero character right now. He might take over that role at any point…that point might even be episode 3. I hope not, but it could be. If we look at the typical hero’s journey flow chart for a story, then Eugeo is the hero and Kirito is the mentor. However, I’m not sure if I buy that yet myself. I can see it with a heroine, but with a male character?

There is nothing wrong with the wizard working his magic. In this case the wizard is Kirito, Eugeo is the hero and we even have a replacement damsel for Alice; Selka steps up to fill the role for her too-removed-from-current-events-to-act-as-narrative-carrot sister. The comparison to Sugu makes me think about how forgotten Sugu is in the greater narrative. Maybe this is preparation for her return to relevance? Or maybe it’s a repeat storytelling tactic to bridge a boring part of the story to a more interesting one…

I find myself in an annoying spot with this Alicization story line. From a storytelling perspective, it’s doing fine. I like epic fantasy stories that start from humble origins and snowball into something massive. Alicization is hitting all the right notes to do that; It’s just doing it in short bursts over the length of a month. The pacing is an issue, but only because I can’t watch more now.

Imagine waiting three weeks to get through the into segment of The Hobbit. You know, the part where Gandalf convinces Bilbo to go on an adventure with the dwarves. Spending two hours on the lead in to an adventure is okay; in fact, I like stories that start this way. It gives me an easy in to invest in the characters naturally, without forced urgency. But spending three weeks on this is hard to take.

Looking back on this arc once everything has aired, my complaints will likely be gone. Right now? Well, at least we have hints that something might happen next week. Who knew I’d be so happy to see some goblins show up? How will Kirito and Eugeo get out of this predicament? Maybe the goblins just happen to have a magic axe that kills demon trees while they’re at it? I’d accept it. 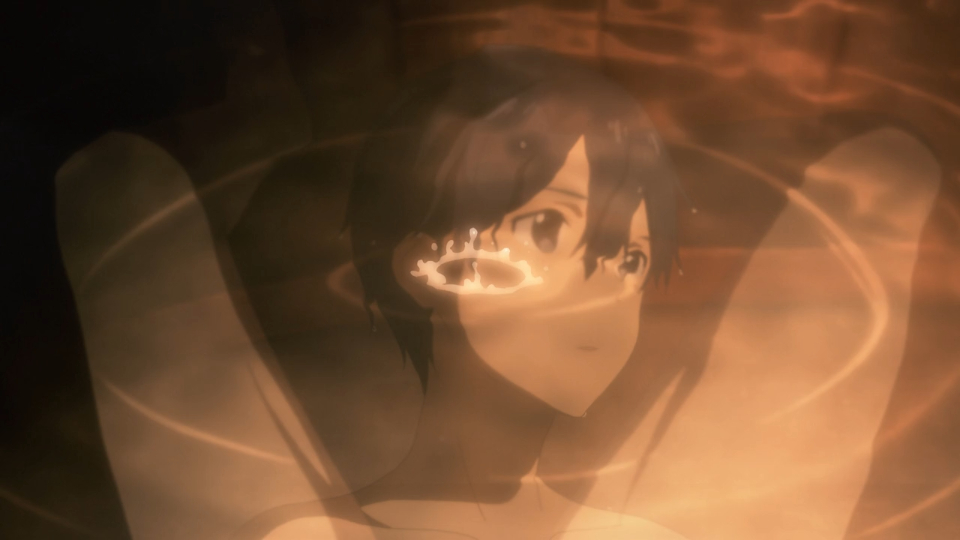 I’m filling in my part of the post last this week, so I can see above that LB and Lifesong are both frustrated with the pacing of this arc. I’m not sure how I feel; I’m not exactly riveted, but I have faith that things are going to pick up soon. Part of that confidence is likely due to the fact that I’ve been hearing good things about this arc in the novels for years, so I’m willing to be patient for a while. If I had no knowledge of the source material, I wonder if I’d be as forgiving?

And yeah, can we just stop with the goblins already? First Goblin Slayer freaked me out with it’s terrifying goblins, then That Time I Got Reincarnated as a Slime healed my psychic wounds with helpless, adorable goblins. Now SAO is trying to give me PTSD again with cruel, human-trafficking goblins, and I’m just tired of this goblin morality yo-yo. Next thing you know Conception will introduce elegant, angelic healer-goblins or something, but who knows, that might actually make that show watchable? It could happen.

Back to SAO, I’m interested with what’s going on with Eugeo here. Back in the premiere episode, when Eugeo froze trying to save Alice, I thought he was struggling against his programming: he’s been conditioned (for lack of a better word) to follow the Taboo Index, only Kirito was urging him to rebel against the system, and it seemed like it was causing his Fluctlight into a Blue Screen of Death situation. At the end of this episode, Eugeo is freaking out again, but it’s not clear if he’s having programming conflicts, or if he’s just plain terrified of the goblins. Maybe both?

I think ultimately Eugeo and Alice are going to transcend being “artificial” Fluctlights and become real people (possibly other characters too), but there’s potential to do something interesting here. After all, the title “Alicization” makes it appear as though the arc is going to focus on a transition involving Alice, but wouldn’t it be interesting if the more important character was Eugeo, and Alice’s role is something else entirely?

Okay, I’m as bored with the unchoppable Demon Tree as everyone else, but I’m still intrigued with where the show is going overall.