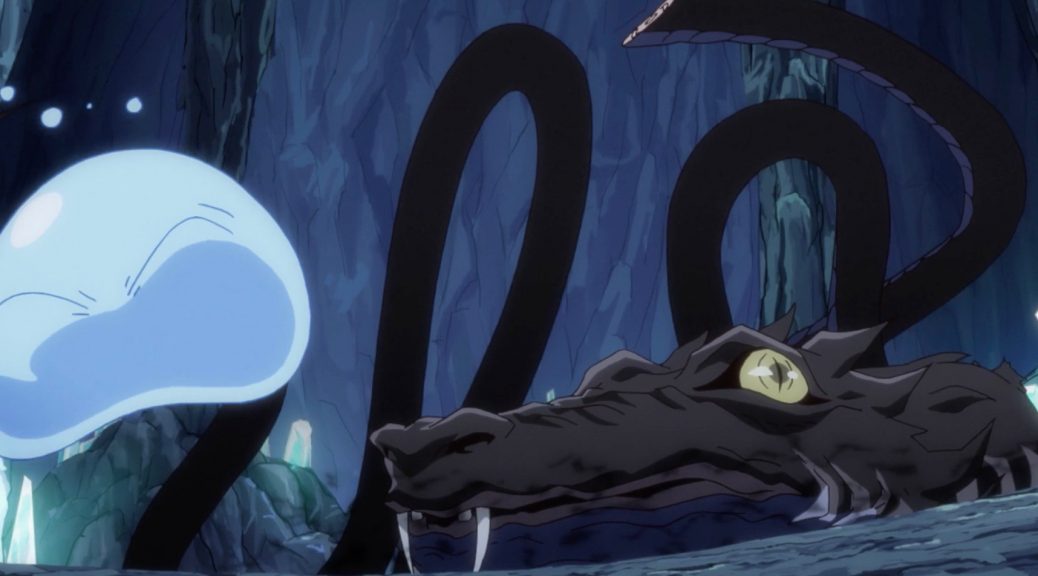 We return to the adventures of the world’s most stupidly overpowered slime. Last time, our slime buddy met Veldora, a trapped dragon, and a beautiful, cross-species friendship blossomed. Now, Rimuru is trying to get Veldora out of his magical prison, but it seems like there may be limits to even the godlike powers of the slime…OR ARE THERE? 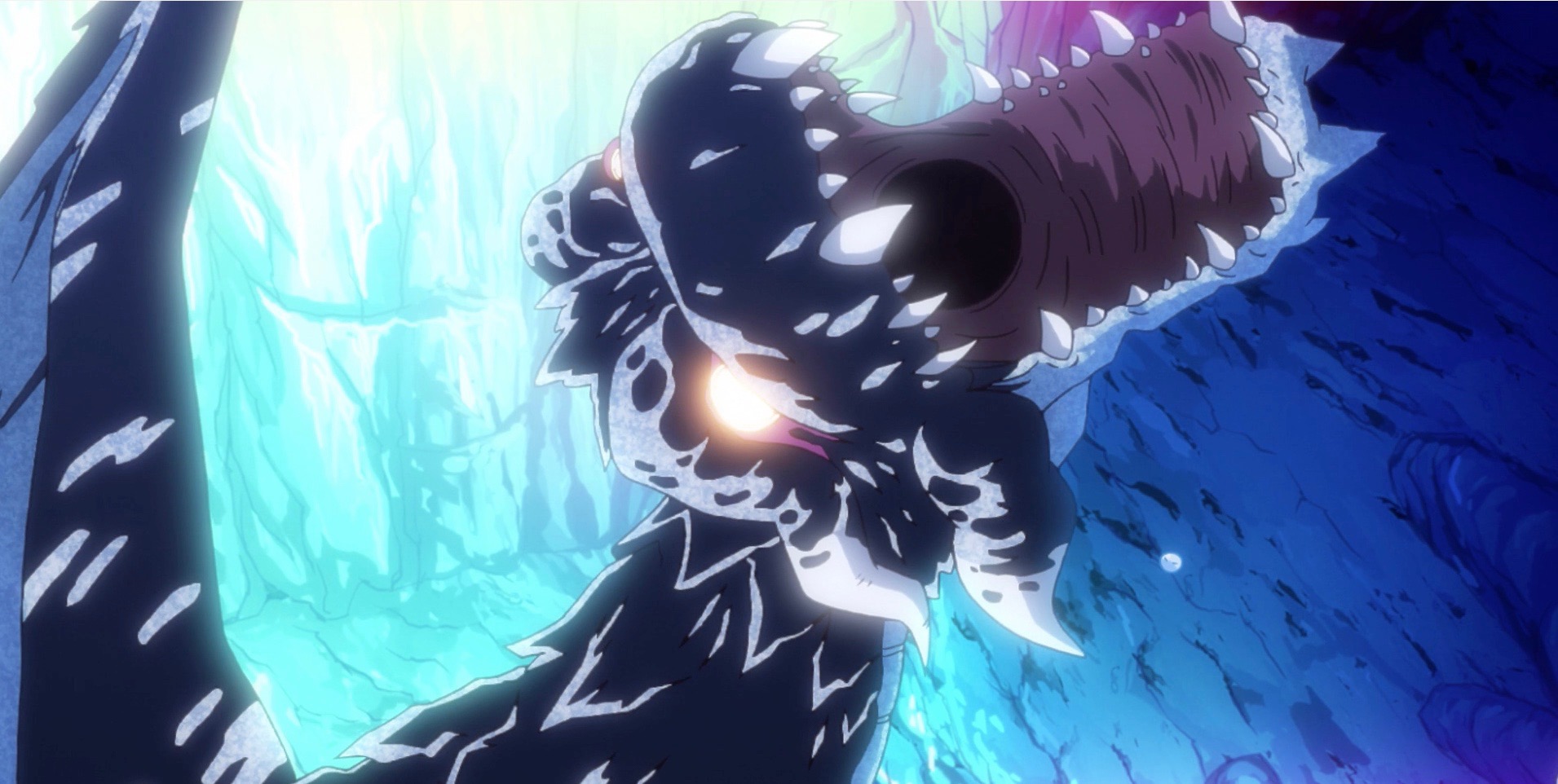 Ok, I admit, I’m confused here. First Rimiru tries to eat the barrier around Veldora, only to fail. Then, not ten minutes later, he eats all of Veldora, INCLUDING the barrier, and that goes fine? Let’s not even touch on the intriguing fact that Rimiru’s stomach is apparently some kind of portal to another dimension containing infinite space, why did that work the second time? Maybe his mistake the first time was trying to eat the barrier as a separate entity? Or did he succeed in analyzing the barrier with Great Sage in between his two attempts?

I don’t get it, so I’m just going to move on. Should I use this picture from now on whenever I’m confused by anything in an anime, by the way? That seems economical.

His best dragon buddy tucked away somewhere in the Infinite Digestion Dimension, Rimiru continues to make his way out of the cave, eating more giant monsters as he goes and gaining their abilities. By about the halfway mark of this episode, Rimiru has become so stupidly overpowered that I can’t see how anything short of an extinction-level event could possibly threaten him, but that’s not necessarily a problem. Sometimes a story requires a character to be super-powerful from the beginning, even though it defies narrative convention, and that definitely seems to be where this show is going. It’s interesting to me though that the main criticism of this show (that I’ve seen) is that it’s “too gamey,” meanwhile no JRPG actually works like this.

Or to put it in JRPG terms, in the space of this one episode, Rimiru went from using a basic Bolt spell to W-Summoning Knights of the Round, backed up with a mastered Final Attack-Phoenix. You are now geekier just for having read this sentence, and have a sudden urge to go breed pastel ostriches.

Interestingly, Veldora’s disappearance into the Digestive Dimension appears to have created a power vacuum, even though Veldora was incapable of doing much for hundreds of years. I like the fact that in this world, strong monsters have political significance in the same way that natural barriers do in our world. Basically, Veldora was the mountains around Switzerland, and now everyone is coming for your sweet hot cocoa.

Serious Politics be happening here. I like the dragon-eating parts of the episode better.

Sadly, during all this political talk, no one says “We have all the best dragons, just the very best wyrms and firedrakes; I like dragons who DON’T get imprisoned in a magical barrier for 300 years,” so there went the show’s one chance at doing salient political comedy.

On the way out of the cave, Rimiru runs into a party of human adventurers, and my PTSD from Goblin Slayer kicks in. I was afraid that the humans were going to be brutally raped and murdered the instant they stepped foot inside the cave, but fortunately– since this show is pretty much the anti-Goblin Slayer— nothing like that happens. Even if some mean monsters tried to harass the humans, I guess Rimiru would just eat them and get new skills, so that’s comforting.

Nooo, go away innocent little blond mage girl! This cave is full of evil monsters, and only death and dismemberment lie before you! Oh wait, a reincarnated virgin salary man killed and ate all of the monsters already, looks like you’re fine? Err, don’t get cocky though.

So Rimiru finally gets outside, and then confuses me again by musing about his good friend Veldora Tempest, and how they haven’t seen each other lately. Maybe it’s a translation thing, but Rimiru’s lines here make it sound like he honestly doesn’t know where Veldora is and is hoping to run into him again soon. Dude, Veldora is in your belly, I’m pretty sure you were there for that.

Then my PTSD triggers again, because Rimiru is attacked by goblins! Except instead of being cruel, bestial, predatory goblins, these goblins are adorable little munchkins who look like they couldn’t hurt anyone. Like, if one of these goblins tried to assault someone, they would probably trip on the way there, get a nosebleed, then cry and need to go get a hug and a kiss from Mommy Goblin. This show has now healed my PTSD from Goblin Slayer, and I am very grateful.

This is how I like my goblins, Level 1 mobs wielding useless weapons and cowering like terrified third-graders. That grimdark show can go fuck itself.

I know it sounds like I’m making a joke here, but seriously? I’m actually very happy to have images of these super-nice goblins override the other ones in my mind. Very happy indeed. Sometimes the only cure for anime is indeed, more anime. 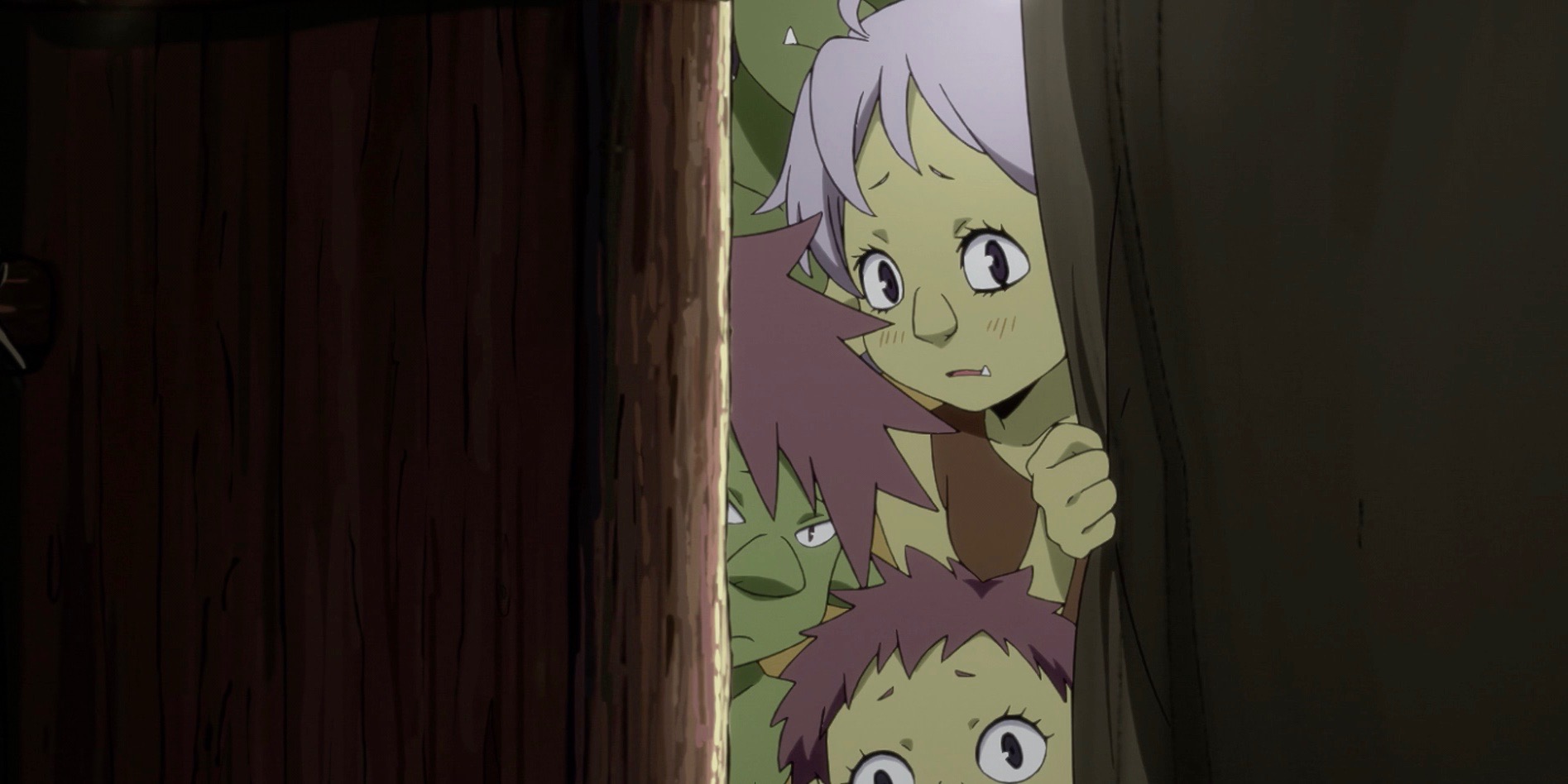 The goblins worship Veldora like a God, and the disappearance of their God is causing major problems. Rimiru never lets it slide that he ate their God, which is probably wise; no adherents of any faith have ever taken that news well. However, with the Direwolves now attacking Goblin Village, the gobs need a powerful monster on their side if they have any hopes of surviving. Fortunately for them, Rimuru Tempest, First of His Name, Eater of Dragons, Keeper of the Mysterious Hard Drive, Holy Virgin SalaryMan, and One True Scion of Pokemon Mystery Dungeon, is on the case!

The episode ends before the Direwolf attack commences; I think we’re supposed to be wondering what Rimiru’s strategy is here, but honestly, does it matter? Based on past experience, Rimiru can just eat all the Direwolves for dinner while the rest of the goblins sit around painting their toenails– but that would make for a pretty boring episode 3, so that’s probably not going to happen. Maybe Rimiru will just eat all the Goblins, they can go to the Infinite Digestion Dimension, and become one with their God? I’m not really looking for spiritual enlightenment from this anime, but hey, if it happens, I wouldn’t be opposed to it.

So that was episode 2 of That Time I got Reincarnated as A Slime. I’m pretty sure that one day, I will regret blogging about this show, but that day is not today.