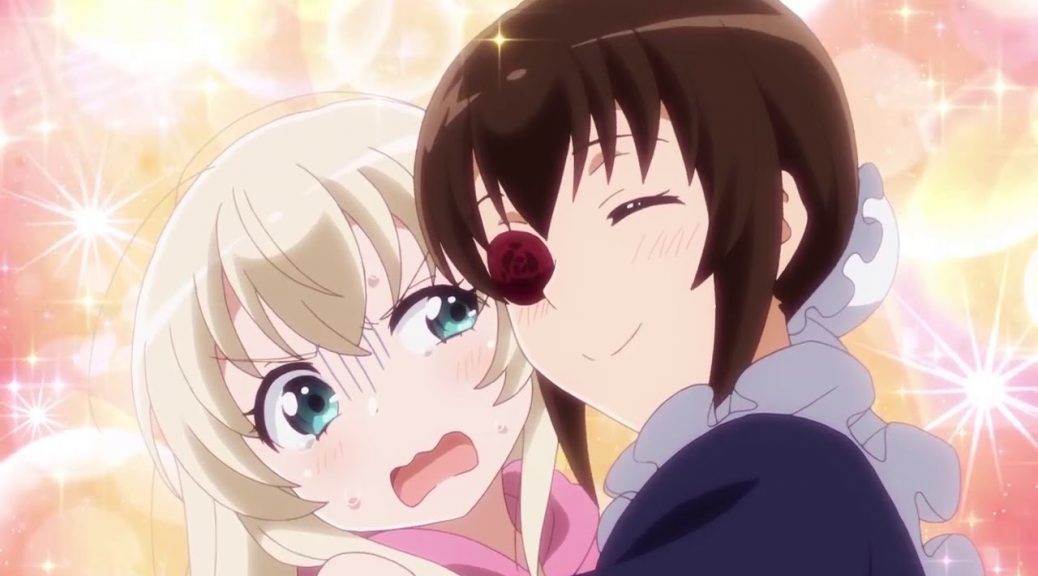 Tsubame Kamoi is out hunting for a job where she can play dress up with a cute girl and she actually finds one.

Episode one did a good job of portraying the comedy dynamic between Tsubame and Misha, her new dressup doll… No, her new care-taking responsibility, that we can expect her to take completely seriously. The comedic timing was good. The jokes go into lolicon territory immediately, but were only uncomfortable; it never crossed the line in a way that made me feel like Misha was actually at risk. Dogo Kobo’s signature style added an extra touch of comedic personality to scenes.

The comedy works, but the comedy isn’t what I expect people to talk about or want to hear about. Tsubame is a bit of a creeper. Knowing that she was in the JSDF helps explain her personality and gives her some context, but doesn’t stop her from being creepy. Good if your okay with a comedy that makes you slightly uncomfortable… bad if well, you aren’t.

I felt that Tsubame’s over-the-top personality was more of a joke than a serious take on what makes her tick. Is she a lolicon, or does she love playing dress-up and likes to say things she shouldn’t? It’s worth pointing out that Tsubame has her own childish gym outfit that she is willing to wear out in public; that says a ton about her personality.

Okay, so she almost certainly has a clothing fetish for clothing designed to be worn for younger girls… that’s creepy in the context of caring for a young girl, but is it creepy enough to put Misha at risk? Based off the words coming out of Tsubame’s mouth? Yes, absolutely. Based off how she acts? Maybe.

I don’t want to justify the nonsense that comes out of Tsubame’s mouth. Instead I want to point out what I felt the episode was doing. By making Tsubame a source of discomfort for Misha we get a easy setup for a comedic struggle. It’s a struggle that works because it makes Misha an instantly sympathetic character. Tsubame’s part works because we aren’t sure how serious of a pervert this woman actually is. It’s a comedic dynamic that only works because it’s agnostic in defending Tsubame. It gives us reasons to think she might not be so bad and then drops a bomb on us near the end of the episode to question our own doubt. It’s a comedic bait-and-switch that works well for the tone this anime is setting up.

If you take Tsubame at face value then she is an unrepentant, creepy lolicon. If you are willing to look past face value? Who knows. I suspect that question will drive whatever story UzaMaid! has planned for us as Misha attempts to drive her off and fails, repeatedly.

The creeper hook worked. This show is funny and its uncomfortable undertones fuel the comedy. I’m curious to see if it can walk the balancing act of remaining funny in creepy territory. Based off what I saw in episode one, I suspect so. 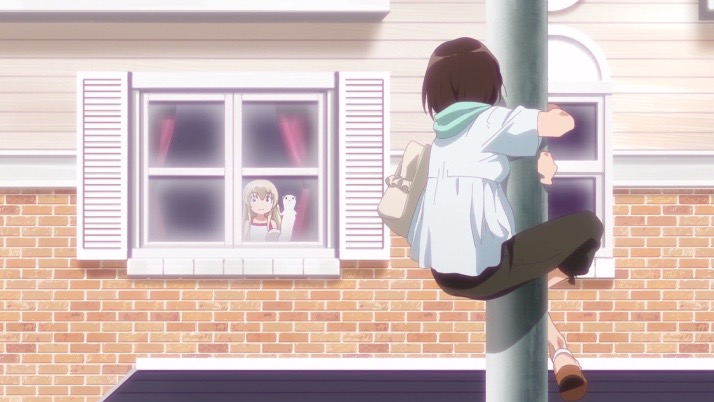 I’m confused about something here. The premise is that a woman with a Lolita complex ends up becoming a maid for a young girl, and hijinks ensue as the girl tries to avoid her aggressive new maid’s tender, err, affections. If you interpret that as this poor kid being saddled with a sexual predator as her caretaker, well, that’s pretty disturbing. Is that really what’s going on though?

Based on Tsubame’s behavior, what she really wants is to dote on Misha– feed her delicious food, dress her up in pretty dresses, pat her on the head, etc. She says some things that make it clear that she has a Lolita complex, but does she actually want to have sex with Misha, or do anything particularly sexual with her? It doesn’t seem like it to me. But if the whole premise is a lolicon taking care of a loli, and the lolicon doesn’t want to have sex with the loli, isn’t that kind of cheating on the writers’ part?

This dynamic is a lot less objectionable (to me, anyway) if Tsubame’s interest in Misha is portrayed as more aesthetic than anything else. If anything, it’s pretty clear that the story is going to be about the awkward transition between Tsubame going from, err…what she is, to becoming a mother figure for Misha, without presuming to try to replace her mother (since no one can do that.) Chances of any sexual activity between the two characters beyond the level of a hug is virtually nil; the question is, how far will they go in the process of poking fun at the idea?

Director Masahiko Oota has a slew of funny comedies under his belt (Gabriel DropOut, Sabegebu!, Love Lab) and Uzamaid benefits from excellent comic timing. This premiere episode is so funny and energetic, it’s easy to overlook the eyebrow-raising premise…for now. This show is going to need funny supporting characters to offer other sources of humor besides Tsubame’s obsession with her young charge, otherwise this isn’t going to sustain 3 episodes, let alone a whole season.

Considering Misha’s difficult emotional state, there is an opportunity for this show to do something genuinely poignant here– that is, if they don’t push the loli humor angle so far that viewers find it distasteful and give up on the show. Given this director’s track record, I think chances of Uzamaid finding the right balance are good, but you never know– they’re playing with fire here. Despite every redeeming point I’ve mentioned, if the main character were male (and it was called Uzabutler), this would be uncomfortable to the point of being downright unwatchable. Basically, only blatant sexism is making this show at all appealing, and I’m not offended by that so much as kind of amazed by it. 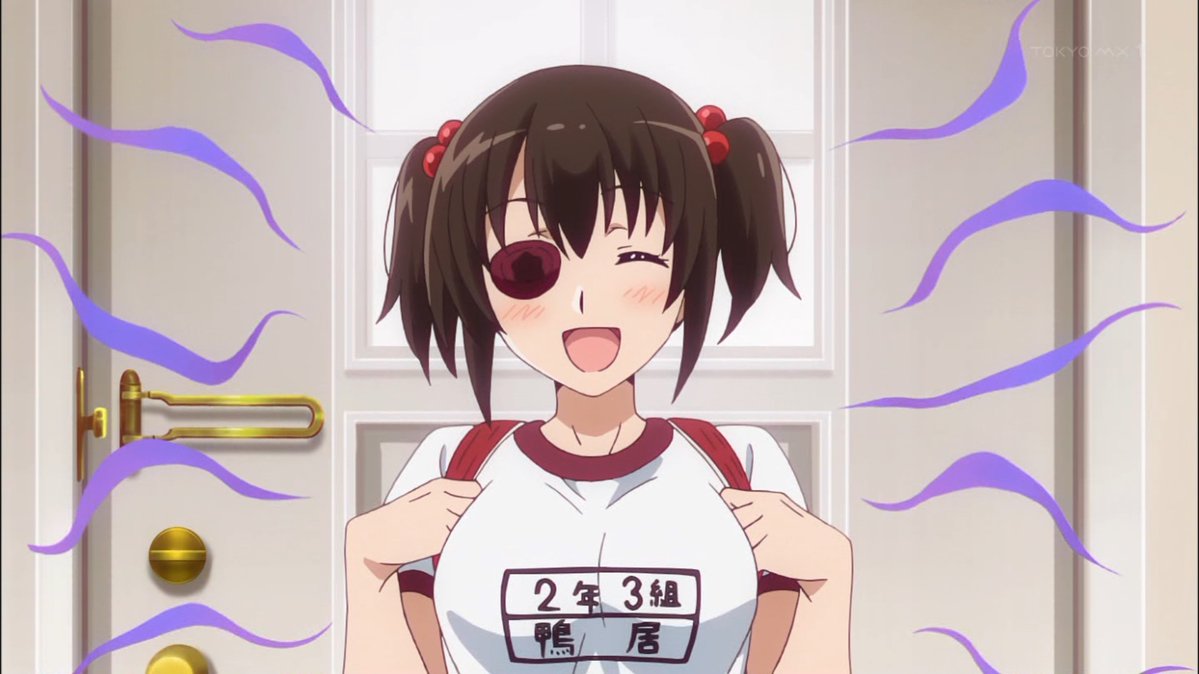 With a show like this, it’s best to go in with no preconceived notions and an open mind. Of course, the problem with this is that if you don’t watch it right away, the chatter will color your opinion regardless, so it’s a very tough balancing act. That being said, I went into this one with only the basic hope that it would be entertaining and in that regard, UzuMaid succeeds… barely.

The running gag with this series (if you weren’t already aware) is that the maid is a former master sergeant and a lolicon. She gets hired to be the maid for a young girl who recently lost her mother and spends most of the episode attempting to molest her mistress, and that’s supposed to be hilarious.

The good news is that there are some genuinely smirk-worthy moments in this first episode; mostly in the form of the young girl Misha reacting wildly to this incredibly buff, fearsome, warrior woman who has come into her life and doesn’t appear to be going anywhere at any point in the near future ( or at least for the next 11 to 12 episodes).

The problem is that so far, UzuMaid only knows how to do lolicon gags and even by the end of the first episode those were wearing thin. If this series doesn’t learn to do something new in a serious hurry, it’s going to lose its audience very quickly. At the moment, UzuMaid is a one trick pony and that trick isn’t even particularly good or funny.

I doubt that I’m going to stick with this one.