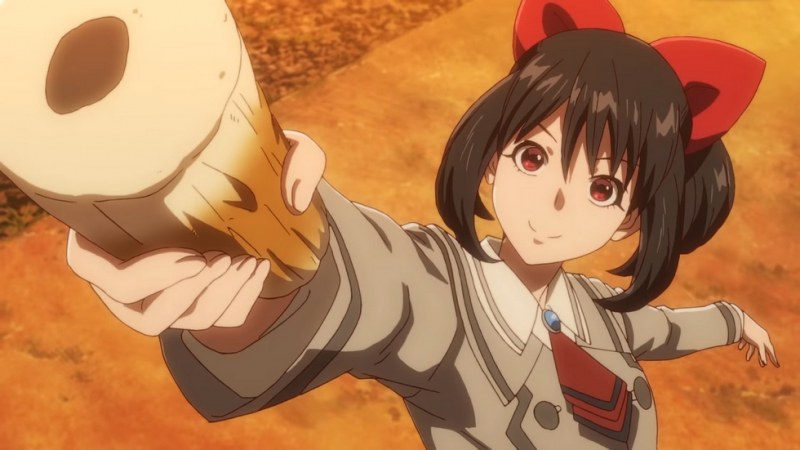 This show has some unique little touches that make me want to like it, but it’s missing a hook. I’ve seen one episode, the second one has actually been up on HiDive for a few days now, and I’ve felt zero urge to watch it. I probably will at some point, but more out of a questionable sense of trying to be fair to the show than out of genuine curiosity.

And that’s a shame, because there should be a draw here. People using old-fashioned radios to travel to snowy in-between dimensions where they meet battle-hardened doppelgängers of themselves should be interesting, but somehow it just misses the mark here. The alternate dimension the girls stumble their way into just isn’t that interesting; it’s just a snowy plain with some monsters. The magical girl/resistance fighter version of the lead character should be intriguing, but so far she’s just a boring character, dour and serious to a fault. I want to say that the battle scene in this episode was good, but I’m not even sure; it was reasonably well animated, but felt generic somehow.

I think the main problem is that the characters just don’t pull you in. There’s definitely attempts to give them personalities; I appreciate the fact that there’s one girl who acts like she’s completely above all this silly occult stuff, but never fails to participate. Asuka’s obsession with chikuwa (a kind of processed fish paste) could be cute, but they overdo it to the point where it’s annoying. Somehow, even with the obvious effort made to keep the girls’ personalities distinct, it doesn’t quite take.

The one thing I do really like is the radio angle; amateur radio is this whole world unto itself that very few people know about these days, and I think it’s a really good subject to use as fodder for a sci-fi story. My dad uses a ham radio, and sometimes he’ll pick up nothing, and sometimes he’ll end up in a long conversation (in Morse code, of course), with someone from Lithuania or something. Like, ham radio is already kind of creepy and mysterious to me in real life, imagine what someone could do with it if they were actually trying to make it interesting.

There’s really nothing egregiously wrong with this show, but there’s nothing great about it either, and there’s way too much competing for my attention to keep up with something mediocre. If the second episode brings some much-needed excitement to this, I’ll keep up with it. If not, it’s out of chances to win me over.

Asuka wants to go to another world and after some antics she and her friends actually pull it off. Weird scifi elements all relating back to sound waves and timelines get thrown around. It all felt careless at first, but I suspect it will come back into play later on as the story progresses.

So far Asuka doesn’t have a particularly good reason for wanting to go to another world. She and her friends seem to be trying it out more because they are board and want to try out something new. Maybe it’s an excuse to do something as friends. Each of them seem to have their own expectations of it.

When this group of friends ultimately end up in another world things get weirder. Asuka meets another version of herself fighting some sort of digital monster. I found it strange that an old analog tape recorder is what transfers the girls into this other world. The enemies explode into digital pieces Sword Art Online style when they die. There were other hints of digital things that caught my eye. The contrast of analog and digital makes for an interesting if not exactly compelling visual gimmick.

The Girl in Twilight took a very low key, subdued approach to storytelling for this first episode. Even with an action scene to pump some adrenaline into the mid point of the episode it felt low on energy. It knew what it was doing well enough to introduce elements that are interesting. It managed to make Asuka an immediately likable character with minimal effort. I like the approach, but I’m worried the story will become boring. We need something more exciting to take this story from mildly interesting up to compelling. Episode one fell short of that mark.

I had expected the story would be written by Kotaro Uchikoshi, but that isn’t the case. As it turns out the original concept is his, but Shogo Yasukawa handles writing the script. Perhaps that helps explain the difference in tone from other works by Kotaro Uchikoshi. Or maybe they wanted to do something different and I’m not completely on board for it.

The sense of mystery and the odd group of friends who don’t seem to take life seriously have my attention. I liked the odd visual gimmicks and potential mystery. It just wasn’t compelling. This anime will need to throw a more compelling hook at me within the next few episodes if it wants to keep me around.