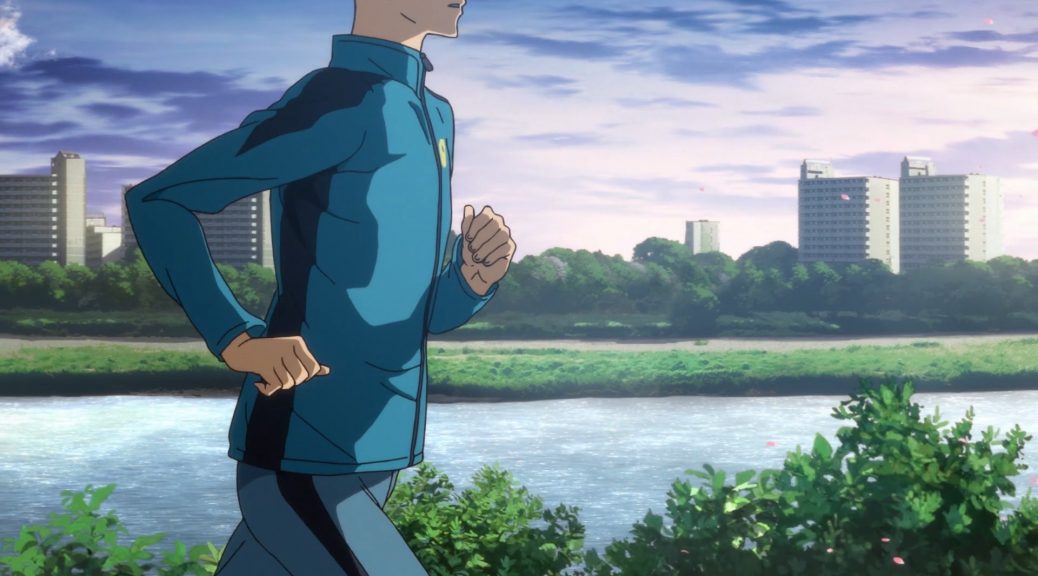 I tend to like sports shows where the main character has a kind of weird, sideways entry into the sport. If the guy or girl has been playing the sport since they were a little kid, and has been dreaming of making it to nationals the whole time, chances are I won’t like the anime much. I prefer the approach of Yowamushi Pedal, where Onoda only develops biking prowess because he keeps riding back and forth to Akihabara to indulge his otaku lust; or Eyeshield 21, where Sena never wanted to be a running back, but conveniently learned how to sprint after an entire school career of trying to outrun bullies. And then there’s Initial D, where Takumi is forced to develop crazy street racer skills because his Dad is too damned lazy to do his late-night deliveries himself.

So on my personal scale of “Unwilling sports anime protagonists,” a boy being caught shoplifting and then having a secret scout for the track team observe him and think “My, what excellent running form that purse-snatching bastard has!” ranks pretty high. It bodes well for my enjoyment of this season.

There’s some really clever writing here. Early on in the episode, when main guy Kakeru is introduced to his roommates in the (soon-to-be) track and field club, it’s one of those “look how zany everybody is!” sequences, which usually rub me the wrong way; it usually feels forced and artificial. Usually everyone will have one stock personality trait, and we’re supposed to find it hilarious that their stock personality traits rub one another the wrong way. Somehow, Run Like the Wind made the characters feel just fleshed out enough that this sequence worked the way it was intended to; the characters seem distinct, and funny in their own way without trying too hard.

Furthermore, not only is Kakeru pressured into joining the team in just the kind of weird way I like, the entire dorm gets tricked into becoming members of the track team. I don’t know why college student Haiji wants to reform the track team so badly (and his methods for doing so are very likely illegal) but gosh-darnit, I have to respect his commitment here. He is basically a vicious track-and-field predator, but since this is anime and not real life, we can enjoy this for the absurdity that it is and not get too bent out of shape out of it.

Another interesting feature of this anime is that it features an exchange student from Tanzania, Musa. It’s unusual to see black characters in anime, and even more unusual to see a black character who lives in Africa. I did find the show’s handling of Musa to be a tad uncomfortable; introducing him stark naked has some unfortunate implications, even though I get that it was supposed to be part of the ‘look at how zany everybody is!’ montage. Same with his roommates making a point of stating he’s “really smart!” as though people would naturally assume otherwise.

That said, I think anything they did with Musa was bound to seem racially charged in this situation. The whole introduction to the dorm kids has a tone of “look at this group of weird eccentrics,” and then they introduce the African character. Anything they did to make him “weird” could be read as racist, but if they avoided that by making him the straight man, that may actually have been more racist. I think it was a bit of no-win situation, and even though the show’s treatment of the character so far made me raise an eyebrow, I do think it’s overall a good thing that the show is trying to present a more diverse cast. I’m going to be very interested in seeing how the writers handle Musa’s character going forward.

Just about the only thing I didn’t like about this episode was the fact that Kakeru clearly has some kind of important history with running; likely he was a high school track star, then something happened to disillusion him, and he’s become the kind of down-on-his-luck guy who’s reduced to robbing convenience stores for food. I think I would have preferred it if Kakeru had no history with running and only developed his great running form due to his frequent shoplifting, but that’s just me and my weird taste; there is drama to be mined from his background, to be sure. Hopefully good drama.

It seems like this show is going to deal primarily with long-distance running, so that means we won’t have to deal with the annoyance of a 100-meter dash being drawn out for three episodes so everyone has time to have their proper mid-race epiphanies. Long-distance running is something that hasn’t really been covered in anime to my knowledge (please feel free to correct me in the comments if I’m wrong!), so I’m very interested to see how the show is going to make this not-very-TV-friendly sport compelling.

All that, and just watching this show inspires me to get on the treadmill and jog more often, so that’s a big point in it’s favor. I’m also slightly inspired to go rob a convenience store, but fortunately, as I live in the United States, our convenience stores suck, so it’s not even worth the effort. If I go to Japan though? Totally stealing some melon bread from a Lawson, and when I get arrested, I’m blaming Run With the Wind.