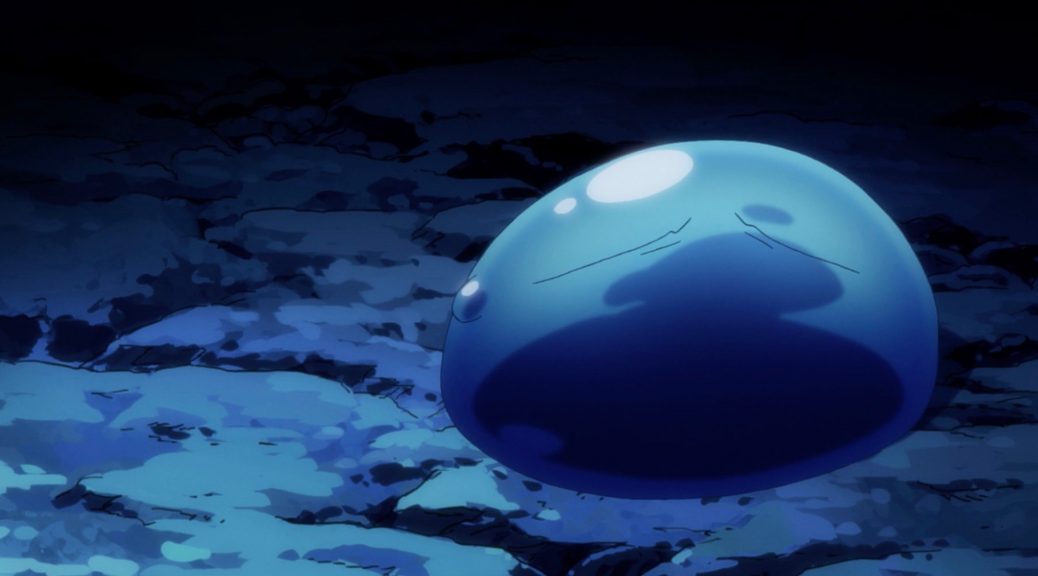 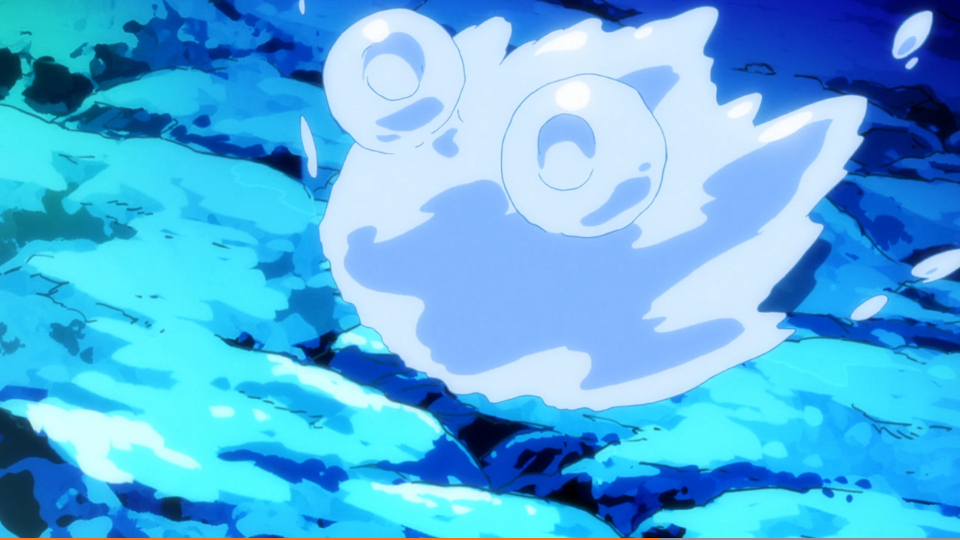 Why is some robot voice granting special powers to a dying salary man? What kind of nasty stuff does he have on his PC? What exactly does it mean to be reborn in a fantasy world as a slime? That Time I Got Reincarnated as a Slime doesn’t attempt to answer the first two questions it throws at us; I fear it might cop out on the third.

Our protagonist isn’t an ordinary slime. If that’s what you wanted out of this anime, you had best give up now. Given the speed he is powering up I suspect he won’t be spending too much time as a blob- like object. Promo art and then the ED animation all but confirm a more humanoid form.

The pacing takes a slow approach to introducing us to our slime’s new home. The unique aspect of being reborn as a slime carries the episode and makes it into something funny. I’m glad the episode decided to focus in on the little details of what it means to be a slime. We don’t know why he is special exception to the general “slimes are mindless” rule, but the comedy makes it work. The implications of being a super powered slime are amusing to think about if nothing else.

How long it will be before Satoru has a reason to ingest a human and take on their form? Will he even keep the same name? Is he even still a he? I bet slimes are gender neutral and… Oh god, what is the appropriate gender pronoun for a slime?

To its credit and my surprise, none of the heroines show up in episode one. Instead, the first companion for our slime protagonist is Storm Dragon Veludora. I had a good laugh at his tsundere act. I’m not entirely convinced he won’t turn out to be a she and transform into a humanoid loli dragon form, but so far so good.

I expect this anime to have harem elements so it’s interesting the first episode didn’t feel a need to show any of it. We got a quick mention of wanting to “screw every girl I see” as he is dying, but that was it. It’s a safe enough bet the “predator” skill our slimy protagonist gets out of the whole dying deal will be the cause of harem antics. I liked the way episode one dodged around that for an episode and introduced us to dragon bro instead.

I’m not sure what I expect out of That Time I Got Reincarnated as a Slime, but episode one sold me on watching more. I felt like the storytelling both knows what it’s doing and feels confident about it. Those are good signs. I can’t wait to see how it all plays out as the implications of becoming a slime god in another world unfold. 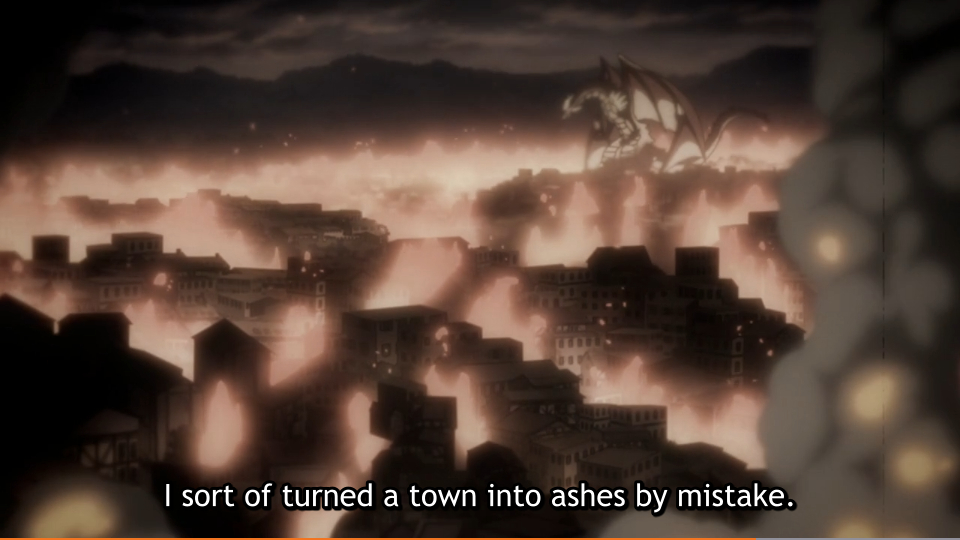 Funny, I had just been reading complaints about how the isekai genre was played out and creatively bankrupt, and then I saw this show. I don’t know if it’s going to prove to be all that innovative (time will tell), but it did an excellent job of reminding me why isekai stories are fun in the first place. It’s light and playful, but also goes into considerable detail about the kind of issues you might face if you suddenly found yourself reincarnated in another world. Questions like, can a slime see without eyes? And if you were reincarnated as a monster, how would you know what you were?

Probably the most interesting idea here is the notion that your “powers” in the other world are determined by your last words/thoughts in the human world. Granted, it seems like a lot of people would say some variation of “ow,” so pain nullification should be a common skill. Still, it’s intriguing to wonder where this system comes from. Is some benevolent, God-like creature trying to correct the injustices of life by giving good people another shot at existence, but kind of screwing up the finer details? Considering the way all-powerful dragon Verudora acts, I think powerful characters on this show may all be slightly confused and incompetent, which I dig personally.

I’m also really curious to find out what the deal is with the girl who apparently died during WWII. Maybe her last words were “Damn, I really hate fascism,” and her powerset involves being super-libertarian? Does that count as political humor, and if so, should I flog myself?

Just about the only thing I didn’t like about this show was the fact that the OP gives away the fact that Satoru, our slime-protagonist, eventually gets some sort of human form. You would think that would be a secret to keep under wraps for at least an episode or two, right? Of course, this may only bother me because I’m intrigued by the idea of the main character being stuck as a bouncing slime for 24 episodes, because it seems like it would be a nightmare for the writers. So basically, I’m a sadist who wants to see the staff of this show suffer, but you should probably ignore that and just focus on the fact that this show looks like it’s going to be some good, clean, JRPG-inspired fun.

Well, relatively clean; I don’t think we really want to know what was on Satoru’s hard drive. 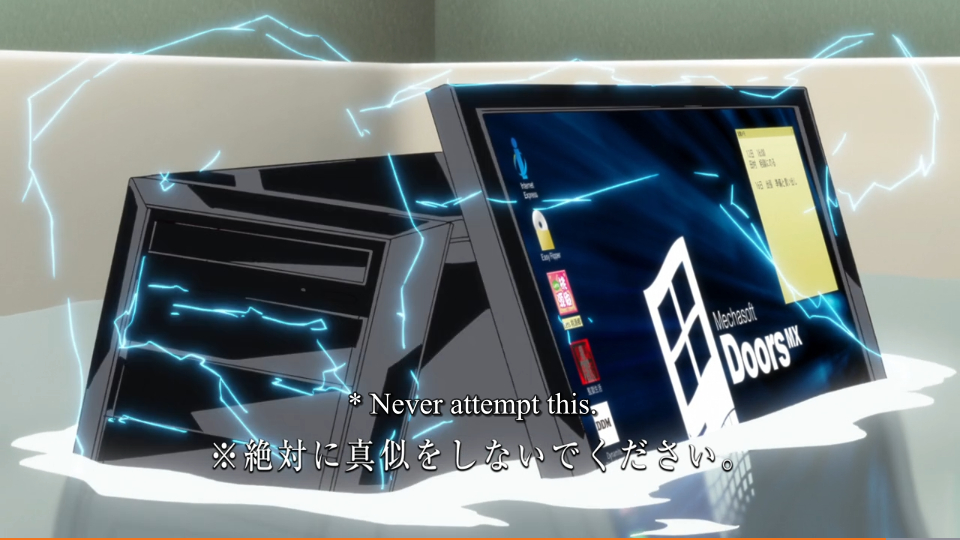 I’m going to sum up why you need to watch this series in two words: tsundere dragon.

While I didn’t like the change from his original gruff male voice to something much more high pitched and perky, that’s a minor complaint, since it ended up growing on me within a matter of minutes.

The only really frustrating thing about this episode is that most of it is spent explaining Satoru’s new basic slime skills rather than setting up the story and world that we’ll be spending the next 24 episodes in. With that much time to kill though, there is no real rush and while some people might find the pace to be a bit too relaxed, I have full confidence in what I’m now certain will be an enjoyable ride. Pick this one up early and get ready for two cours of fun.