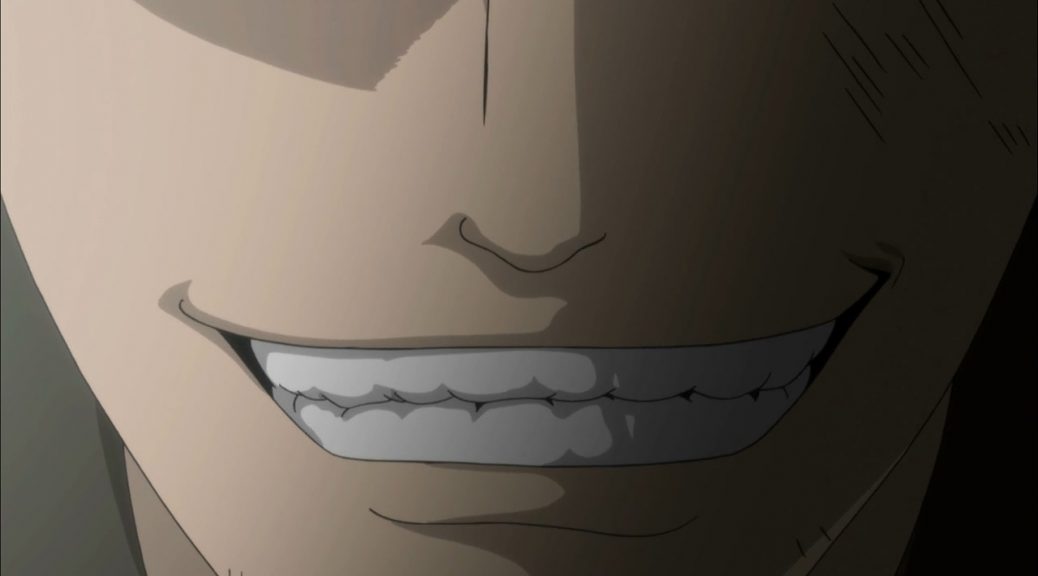 As of halfway through the series, I was seriously considering writing up each episode of this show, but it didn’t feel right. I was often confused about what was actually happening, and each episode felt like a quick punch to the face; when the ED started playing, I usually felt more like I wanted to take a nap then sit down and try to analyze what I just saw. I think shows like Doctor Who are like Baby’s First Time Travel Story, and Steins;Gate is like, Eighth-Grade Honors level or something, and I’m just not ready for it.

That said, even though I’m usually confused by what’s happening (and in what order), I really do like the show quite a lot and didn’t want to let the season end without at least trying to do some justice to it.

So, as I predicted, a lot of S:G 0 was about watching Okarin get his Houiin Kyouma personality back; or rather, his acknowledgment that Kyouma is a necessary force in his world. Watching him put on that persona again, after trying so hard to bury it for about 20 episodes, was incredibly satisfying, but I’m left wondering why.

There’s the basic explanation that Kyouma is just a fun character to watch, but I think it goes a little deeper than that. Earlier in the series, Okarin tries to respond to massive challenges by being humble and aware of the limits of his resources, and Kyouma is all about doing the opposite of that. Kyouma is about being bombastic in the face of nigh-impossible challenges, and then somehow faking it until he makes it.

I guess you could boil it down to the power of positive thinking. Okarin thinks “I’m not powerful,” so he always reacts defensively and doesn’t truly believe he can change anything. Kyouma thinks “I am virtually OMNIPOTENT!” so by definition, anything he hasn’t done is just something he hasn’t achieved yet; he just needs to work out the minor details. He goes into situations thinking “of course there’s a way to solve this,” then finds one because he expected to find it.

I don’t think it’s that simple though. Kyouma’s “origin,” as it were, came out of comforting Mayuri after her grandmother died; at the time, they both knew full well that Kyouma had no power to bring her grandmother back, or anyone else for that matter. At that time, the whole Kyouma persona was really just a distraction; just as the Amadeus app was only ever a distraction from the real Kurisu being gone. In the case of Amadeus, the cast only makes progress when they rip that band-aid off and delete Amadeus; but in Okarin’s case, trying to “delete” Houiin Kyouma was the wrong approach. 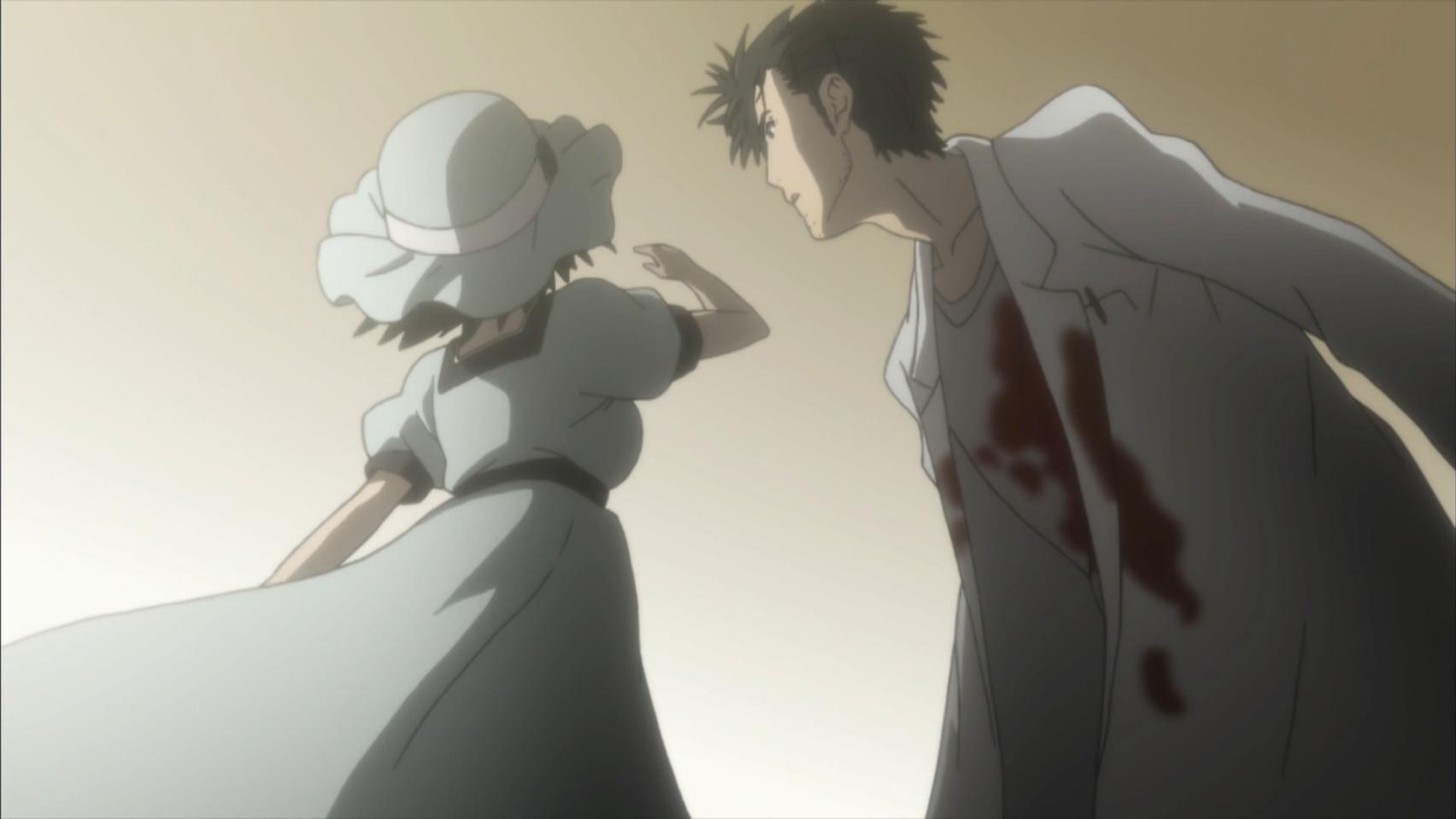 On the scale of anime special attacks, Mayuri’s “BitchSlap You Back to Correcting the Time Stream,” should probably be up there with something that Goku does.

Ultimately I think the best way to look at it might be a criticism of humility as an approach. I mean, I hate it when people talk about how great they are (I don’t understand why anyone thinks that’s an attractive look), but from another perspective, humility is running away from your power, from your responsibilities. Okarin’s whole angle for most of the show is “I was too arrogant before, I am but a humble student now and will not meddle in affairs beyond my stature,” thus he accomplishes nothing. It’s when he throws humility aside, says “Fuck it, I can time-leap through 30 years of history if I want to, and if I want to call myself an all-powerful mad scientist, who the hell is going to stop me?”, then he makes progress.

Okay, so the verdict is that humility is bad, and we should all see ourselves as GODS WALKING THE EARTH! Well no, obviously not. That would be insufferable. But there’s a point where humility becomes as delusional as a childish mad-scientist persona; pretending you have no power over something, because trying to wield the power you do have is just too scary and it’s easier to run in the opposite direction.

Changing the subject, I wasn’t completely happy with the show. I thought Kagari’s character represented a bit of a wasted opportunity. As far as I can tell her resemblance to Kurisu was just a red herring, and her significance to the plot had nothing to do with it. That kind of bugs me, because I think of Steins;Gate as being above that sort of thing– maybe I shouldn’t, but I do. When Kagari showed up, I thought that someone in the future was trying to turn the Amadeus AI into a real human, hence her resemblance to Kurisu, and we were going to end up in some sort of cool Ghost in the Shell-esque cyborg tale. Not only did that not happen, but the show went nowhere near there. Kind of a bummer, or my fault for trying to write the show in my head while I was watching it? Probably the latter. 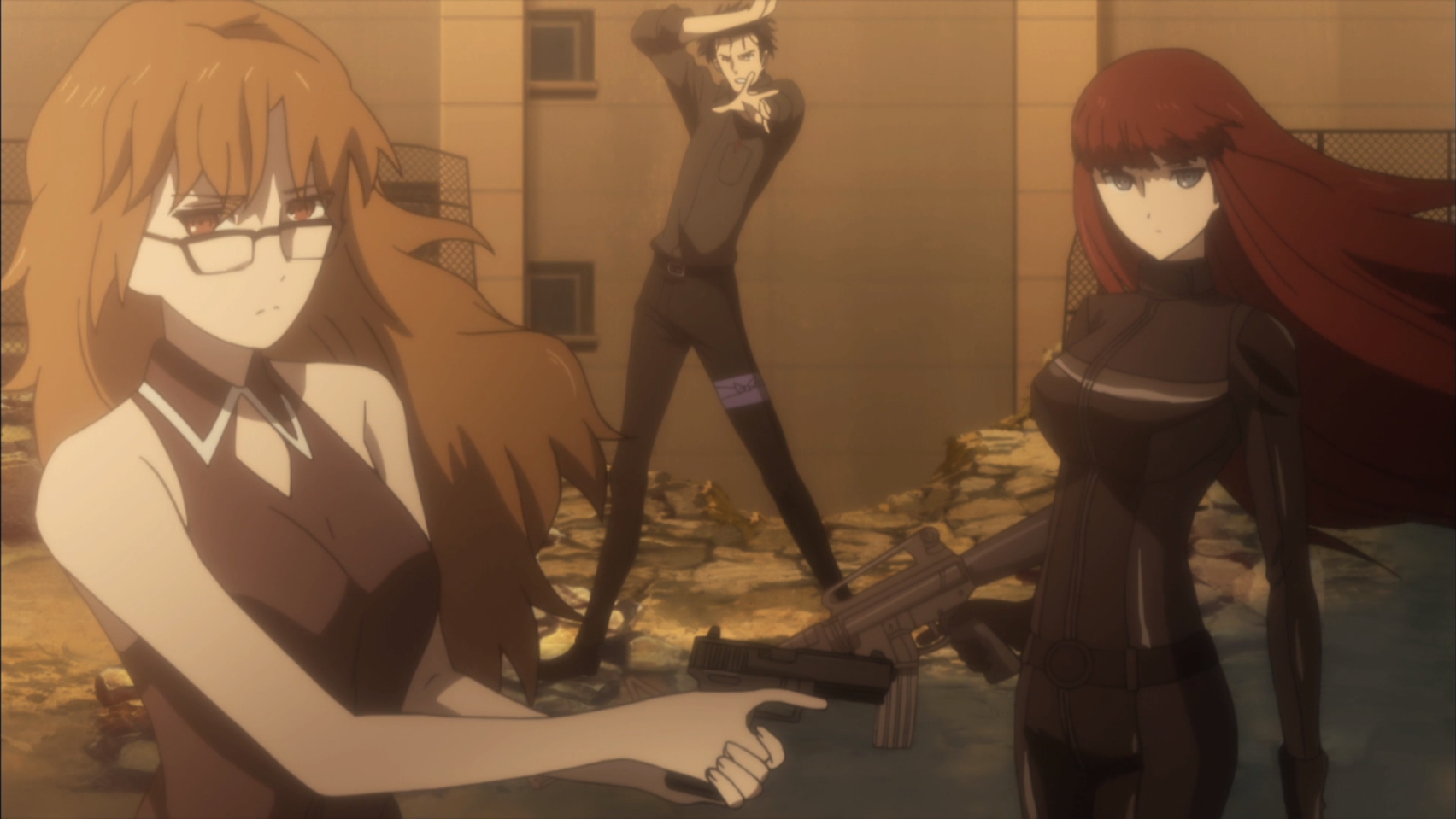 So Kagari disappointed me, but she allowed Okarin to get this one fantastic Charlie’s Angels-esque moment, so I guess she’s okay *grumbles.* I appreciate her busty design, by the way; that made it obvious at a glance that she looked like Kurisu, but wasn’t her. They could have had different haircuts or something, but this was smoother.

I’m also not sure I’m sold on this particular post-apocalyptic world Steins;Gate keeps trying to show us. Considering that the remains of humanity seem to be barely surviving in the ruins of cities, where does Suzuha go to obtain her ninja-level soldier training, which she has in every timeline? How are Daru and co. getting food when the food supply is presumably controlled by these Evil Military Organizations with seemingly unlimited foot soldiers? How is the resistance’s position stable enough that they can get away with keeping a comatose patient in the same place for over ten years? They’ve never had to clean house and hide from the authorities?

All of that falls under the category of minor nitpicking though; after all, the whole point of that future is that it’s so horrible, we don’t actually want to know more about it. But the Bad Future plays a bigger role in this show than it did in its predecessor, so I guess I was hoping it would get a little more development.

All in all though, this was a hugely impressive effort, and my hat is off to studio White Fox (who apparently made some changes to the original VN plot, so they didn’t just take the line of least resistance with the script). I said before this show aired that I wasn’t sure if I even wanted another Steins;Gate story, and this show pretty well convinced me that I did about thirty seconds in.

Also, this is maybe a trivial thing in the grand scheme of things, but needs to be said: this show has the absolute best version of the “Play the original opening theme at a critical moment towards the end” trick that I have ever experienced. I actually got chills when Itou Kanako’s Hacking to the Gate started playing. That’s one of those anime moments I wish I could experience for the first time, over and over again, but I consider myself lucky that I got to have it once.

Steins:Gate 0 is stellar. There is no God. Hacking to the Gate is playing. All is right with the world.

2 thoughts on “Finishing Up Steins;Gate 0”