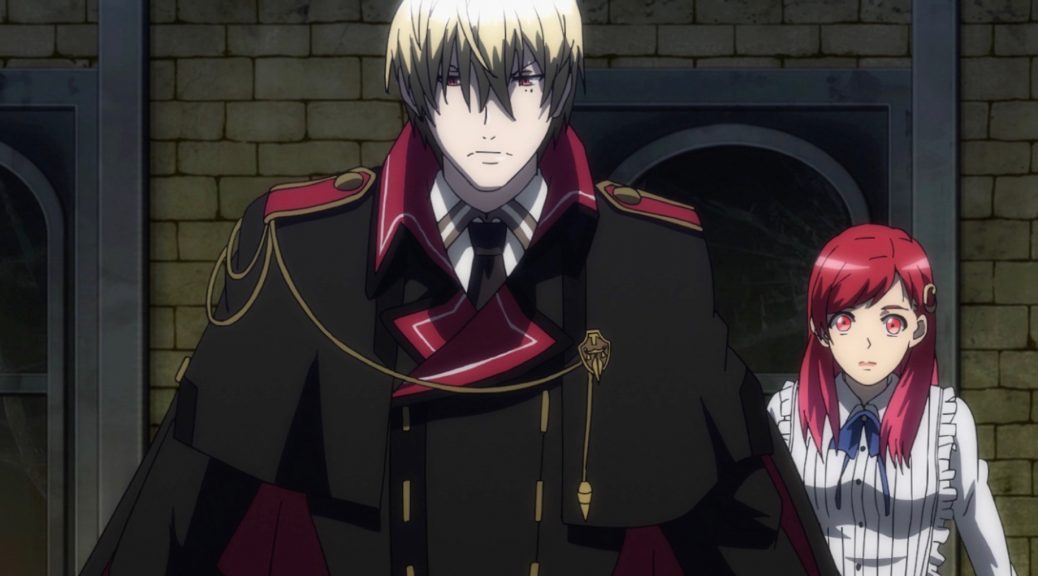 I didn’t watch nearly as much summer anime as I planned to, so this post shouldn’t be 8 million words long (for once). The shows covered here are by no means the best or most significant of the season, they’re just the ones I happened to end up sticking with for the last three months. Hopefully I’ll get a chance to watch some of the more noteworthy shows that I missed (like Planet With and Revue Starlight) sometime between now and the heat death of the universe.

For the record, I did see some of Hanebado!, Asobi Asobase, Chio’s School Road, and How Not to Summon a Demon Lord, but didn’t end up getting very far with them. Also, Steins; Gate 0 just wrapped while I was in the middle of writing this post, but I’ll deal with that show separately.

Note: Crunchyroll’s new video player makes taking screenshots an absolute chore, and it’s having an impact here. With the current player, whenever you pause you get a giant “play” icon over the screen, making the screen unusable. So you need to try to get a shot while the episode is playing, without being able to remove the subs. I still haven’t figured out what I’m going to do about this, because trying to take multiple screenshots from different shows feels like stabbing myself in the face with a spoon, so for the time being, enjoy the one screen I successfully took from Phantom in the Twilight above. Maybe it’s time I started replacing screenshots with terrible MS Paint art anyway? It could be my new aesthetic.

Free! Dive to the Future

This was a really frustrating season. About two-thirds of it was taken up with an arc I didn’t really care for, and when we finally got to the good stuff towards the end, it wasn’t quite enough. I appreciate what KyoAni tried to do here by opening up the world of Free! so much; seeing the boys out in the world, attending different colleges (even on different continents), made it feel like the world of competitive swimming was much, much bigger and more colorful than the little town of Iwatobi. It was an ambitious effort.

However, as a result of making the scale so big, the cast became extremely large. And because it’s Free!, almost everyone is a blue or pastel-haired pretty boy with perfect abs, so it became hard to tell some of the characters apart. Maybe if I’d watched all the seasons back to back I’d know who all these different swimmers were, but to be honest, I started tuning out some of the supporting characters after a while: I didn’t remember where I was supposed to know them from, and nothing they did seemed important to the plot anyway.

Ikuya’s arc, however, proved to be a much bigger problem than the overstuffed cast. Ikuya is a character who has a bone to pick with Haru because he always felt like Haru abandoned him, a similar plot line to the first season of Free!, which dealt with similar feelings between Haru and Rin. This would be okay if not for the fact that a)Ikuya is a much less interesting character than Rin b)Ikuya does not have shark teeth like Rin and c)how many of these close childhood friends/swimming groupies does Haru have in his closet, anyway? It seems like everyone who so much as steps into the shallow end with Haru becomes obsessed with him for life.

When the show finally pushes Ikuya to the side and focuses on the characters we’ve known and cared about from the beginning– particularly Haru, but Makoto and Rei as well– it’s a much better use of everyone’s time. Haru has a fundamental problem where he enjoys swimming for it’s own sake, and doesn’t really want to be competitive, but he’s been so far above everyone (in terms of raw talent) for so long that he’s been able to get away with it. Now, at the college level, he’s encountering swimmers who can beat the pants off of him, and he has to decide if truly being competitive is something he wants for himself.

Unfortunately, since most of the season was taken up with Ikuya’s arc, we only get partial development on this; Haru seems to have decided that he is willing to play to win, but he’s not willing to sacrifice anything (or anyone) he cares about for the sake of winning either. Maybe this will be enough, but it seems to me like he’s just kicked the can down the road a little bit. Eventually, he’s going to have to accept the fact that winning will hurt people, and some of those people will likely be his closest friends. If Haru did win that last 100 meter freestyle heat at the very end (and thanks for ending in the middle of a race, show), how do you think Rin felt?

I guess it’s a pretty strong statement about how much I care about the original characters that I’m looking forward to Free! coming back in 2020, even though most of this season was yawn-worthy. I just hope the next season (or movie; it’s not clear what we’re getting in 2020 yet) focuses on the core characters and doesn’t try to chronicle the lives of 50 different lookalike pretty boys who like to swim.

Kakuriyo: Bed and Breakfast for Spirits

This two-cour show was just quietly competent and pleasant all throughout, without ever stepping up a level and becoming something truly fantastic. There was a tease that we were going to get some kind of twist toward the end that would paint everything in a different light, but in the end, there wasn’t so much a twist as there was an admission that the thing you’d sort of guessed happened all along, did in fact happen. It’s a bit of a let down.

There are some interesting implications here. One of the things that was refreshing about this series is that even though Aoi is “engaged” to the Ogre Lord, it’s pretty clear he has no wish to force her into anything she’s not comfortable with, and the ball is in her court as far as their relationship progression is concerned. However, if the Ogre Lord had interactions with her during her youth, he begins to look less benevolent; maybe there was an element of wife-husbandry, or trying to magically raise Aoi to be his perfect bride from childhood. But honestly, the whole thing is so nebulous and vague it’s hard to say. All we know is that one time when little Aoi was starving because her mother abandoned her, the Ogre Lord (her future fiancé) and Ginji (her future best friend) appeared to her in spirit form and fed her. It’s not a lot to go on.

The more I think about it, the more I’m not sure how to feel about this series. It felt like it was always on the cusp of getting quite interesting and never really went there, but it was just such a happy, appetizing addition to my watch list for the past 25 weeks, clearly something went very right. It had the distinction of being a closet food show that included food porn without being overwhelmed by it, and took place in an interesting world that could certainly be explored further. I’d like to see more of this, but if we do get more, I hope we get more development on the main characters’ relationships and a little bit less focus on random spirit-of-the-week outings.

Phantom in the Twilight

This was a mess, but it was kind of fun in it’s own way. Pre-season, I thought this was going to be one of those episodic occult shows, where the cafe would serve as a hub where different supernatural creatures would come to hang out. Then, episodes would focus on these different beings at the expense of the show ever developing much of a plot. Well, I was totally wrong about that, because this show was very plot-driven; unfortunately, the plot just wasn’t interesting.

To best explain what was wrong with this show, rather than going through the plot in any great detail, I’d rather point out one detail of the world here. In Phantom, supernatural creatures (known as Umbra) are created by the human imagination. So the reason why there’s a vampire character named Vlad is because of Bram Stoker’s Dracula, and the reason why there are lycanthropes running around with wolf-ears is because people have always told stories about wolf-men, and so on. That’s interesting, right? Not original, to be sure, but a more interesting take not the supernatural than “supernatural stuff exists because, uh…I dunno, it just kind of does?”

And yet, this fact has virtually no effect on the story. Vlad could just be a random vampire, with no reference to Bram Stoker,  and everything would play out exactly the same. (Plus, I’ve read Dracula and Vlad is nothing whatsoever like the title character, which doesn’t help.)The power of human imagination to create monsters ended up being thoroughly irrelevant to the story. It was like the show put a bunch of different ideas together, some of them good, without ever really thinking about how they would interact with each other.

All that could perhaps be forgiven if the action was really cool, but it was generally talky and slow. Plus, main girl Baileu Ton is supposed to be a mage, yet she seems to do more physical stuff than the werewolves do, and I’m still not sure I understand anything about how her powers were supposed to work.

Look, it was a show that took place largely in a coffee shop and had a vampire named Vlad that loves serving tea, it had a sense of humor about itself, and so on; it wasn’t without redeeming value. It just didn’t really come together into something that I could get invested in.

Trying to write about Encouragement of Climb is a lot like trying to write about Hidamari Sketch; you want to write about why it’s so relaxing and charming, but then you just start thinking of butterflies wafting through the air on a gorgeous spring day, or drinking hot chocolate in front of an iced-up window on a cold night, and you get so relaxed that typing words just seems like way too much work.

To the show’s credit, they did add some drama without trying too hard and overselling it. The girls experience realistic growing pains in their friendships, but the show never gets depressing or melodramatic about it. Sometimes you want to slap the girls to get them to see sense, but to be fair, that is a very common reaction to real-life teenagers, and Encouragement should not be blamed for it.

This season was so encouraging, I almost called my Boy Scout leader Dad and asked if I could come along on a hike, so I could have that experience of drinking fresh-brewed coffee over the embers of a dying campfire in the crisp autumn air. Almost. One more season of this show and I’ll probably give up on this blog to go backpacking in Vermont for the rest of my life, so I’ll try to get in as much otaku stuff here as possible before the inevitable Encouragement of Climb Season 4.

2 thoughts on “Wrapping up the Summer 2018 Anime Season”