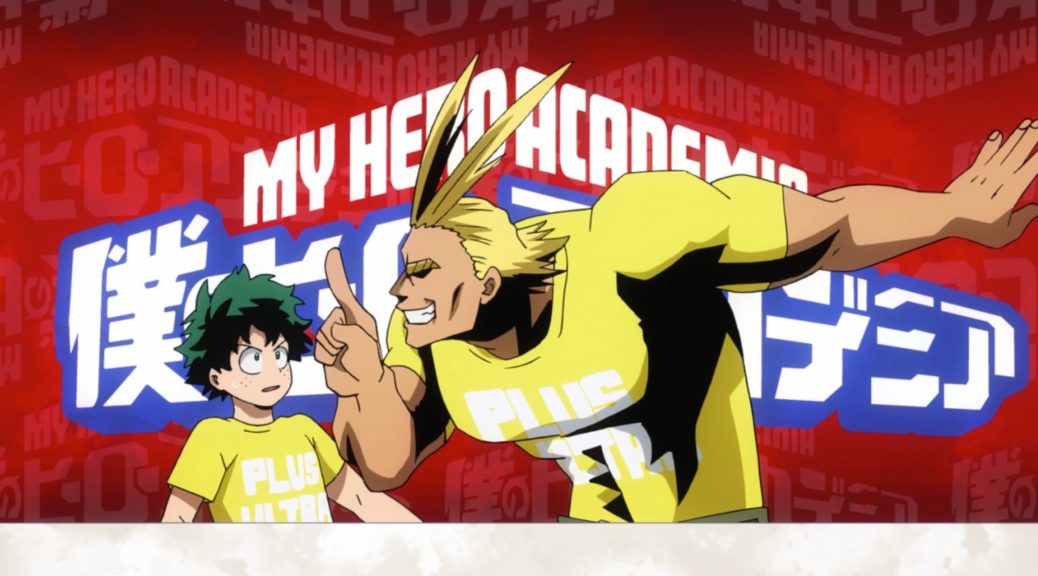 It’s been a hectic week or two, with big trips and settling back in, so expect a big ol’ My Hero Academia review catchup! 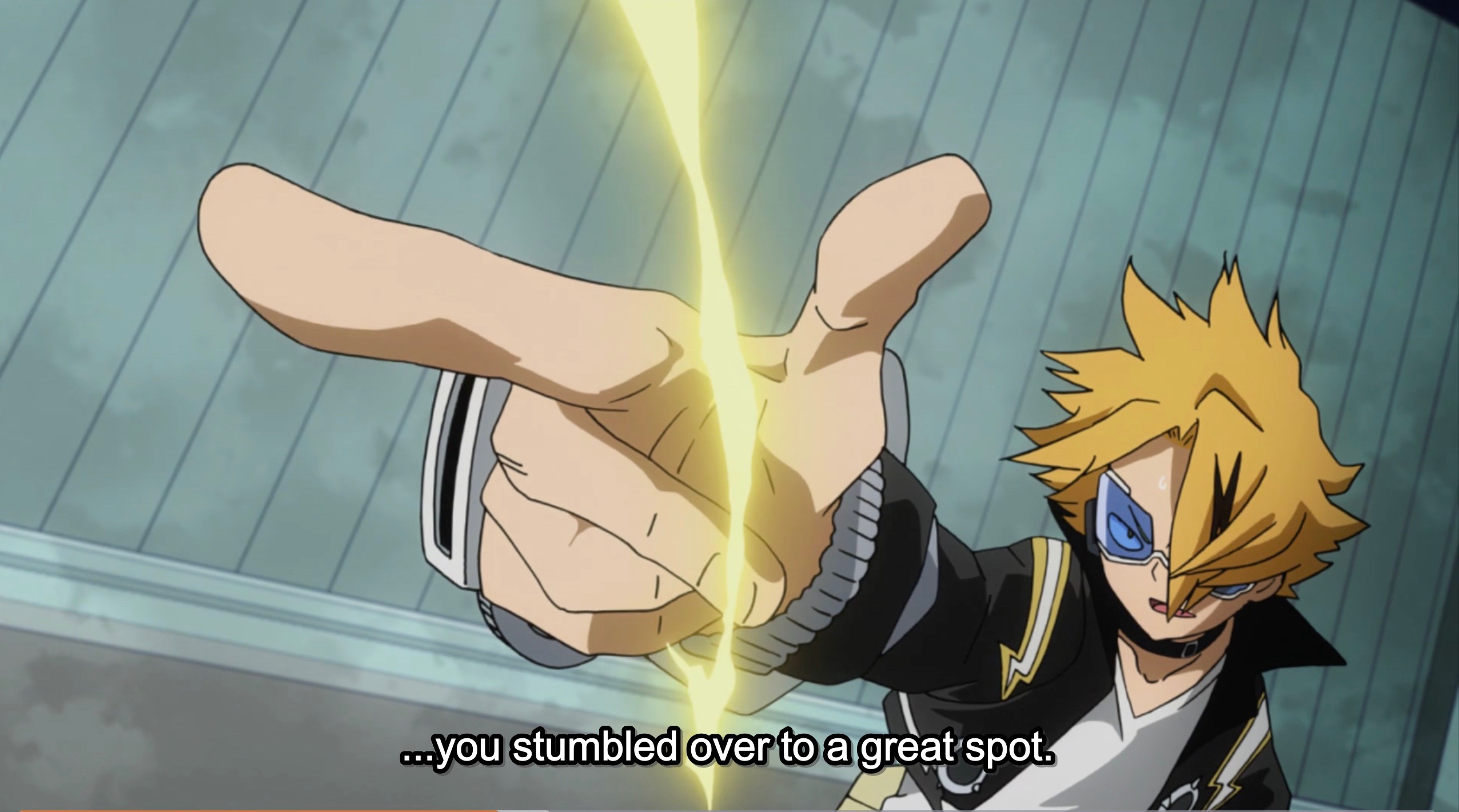 After seeing several members of 1-A  pass the exam last week, we see the continuation of everyone else’s battles. This episode is basically split three-ways. First up, the battle with the Human Meatball-Maker, as Bakugo and Kaminari continue their assault. What’s interesting about this particular battle is that you would assume that Bakugo would be the one to get the MVP title of this match, but that’s not the case; he quickly gets taken out and turned into a creepy meatball man.

We learn more about Seiji, AKA Meatball, in that he feels the need to take it upon himself to thin the herd of those he deems unworthy to be heroes. That said, he’s arrogant and in need of a little lightning in his face, and that’s where Kaminari comes in. Now better able to aim his electricity, thanks to some cool new gadgets, he can properly control his power. He also finds newfound respect for Bakugo’s ability to control his powers in order to protect his friends. Not inclined to let a little thing like being turned into meatballs stop them, his two friends deliver the final blow.

Elsewhere, we get to see Deku, Sero and Ochaco all come together to capture their prey. There’s a scene I love where one of the captured heroes tries to plead to Deku that he really, REALLY needs to pass this year and gain his license. Now, on another show (or perhaps earlier in Deku’s character arc), the hero would’ve hesitated, wondering whether or not he truly deserved to pass instead of the other guy. But Deku is resolute; he just tags the guy out stone cold, saying that he himself needs to pass, and it’s pretty great.

The last leg of the race features the 11 members of Class 1-A that have yet to pass. Laser Bellybutton Boy Aoyama has all but given up, with 2 of his 3 targets out, but Ida tries to reassure him. Bolstered, Aoyama pulls off a last ditch “suicide” attempt, drawing attention to himself so Ida can escape. Arguably, Aoyama could be considered someone with disability in a superhero society, since he can’t use his power without injuring himself unless he has support; a small, but touching glimpse into his life gives us reason to consider this under appreciated character. However, his sacrifice play has an untintended effect, as his laser serves as a beacon for all of 1-A to reunite, plan a counterattack, and pass the exam together. It’s a great moment all around, where we even get to see Toru’s actual quirk in action: Light Refraction. Now all of 1-A has passed, finally! 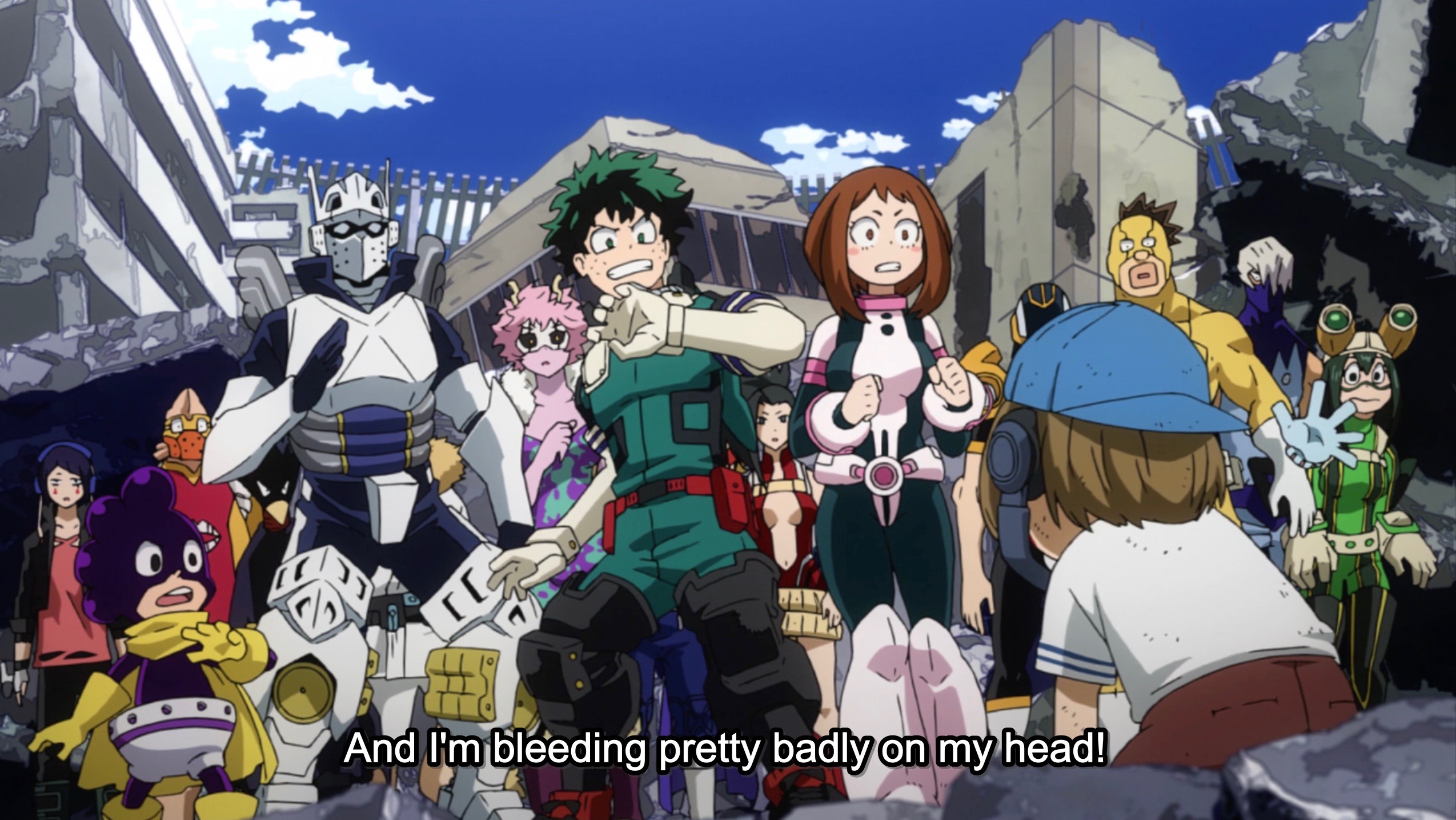 This one veers away from combat and focuses on a less flashy, but no less important element of heroism: rescue. The exam field is turned into a disaster zone, with innocent “civilians” (actually paid professionals) caught in the debris; naturally, the 100 students who passed the first part of the exam must save them. The idea that the Help Us Company, or H.U.C., works with the superhero industry to train heroes how to react to crises by providing people to rescue is a logical bit of world-building that fits very nicely. I’m interested to see what else H.U.C. gets up to in the future.

There’s a radical shift in tone as the kids go from fighting one another to working side-by-side, setting aside their differences for the greater good. Unlike the second-years, our 1-A kids are very inexperienced in this area, either unsure of what to do or making rash decisions that cost them. It’s interesting to see Inasa– a boy extremely gifted and in control of his abilities– struggle to perform rescues because he’s so impulsive. We also learn a little more about what his damage with Todoroki is, and it may just have something to do with Endeavor; the plot thickens.

Real quick, let’s touch on Ochaco. I feel like she gets a lot of criticism thrown her way for being lovestruck for Deku, but…it makes a difference that she herself is aware of this. She’s aware her feelings for Deku and jealousy towards Camie are interfering with her goals, and ultimately decides that she has to suppress those feelings, at least for the time being. It’s a much more admirable approach to the problem than many viewers are willing to give her credit for.

Not only must the kids work to save people, they now have to attempt a task considered hard even for pro heroes: fighting foes and saving civilians at the same time. Gang Orca, The Number 10 hero is on the attack, and posing as a villain. We’ll soon see the results of this…. 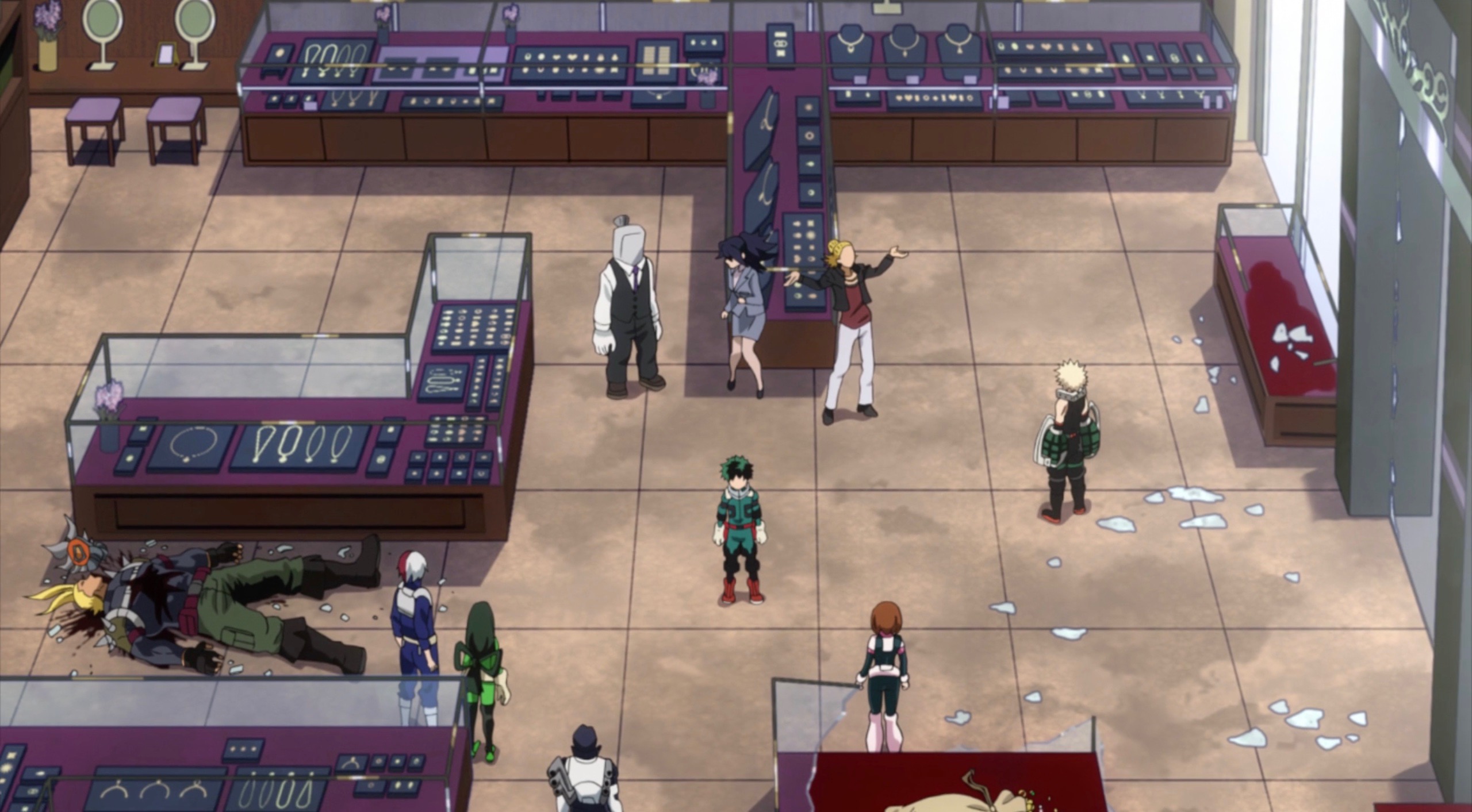 …but not in this episode, because this one is a filler TV-special. For Japan’s Save the World With love Day, all the programs on the channel ran an episode relevant to the theme, so MHA gives us a side-story.  This episode is two things. One: a pseudo-advertisement/setup for the My Hero Academia: Two Heroes movie (which I’m going to see later this month). These were easily the weakest scenes, but they weren’t offensively bad, just kinda meh. Two: a test exercise featuring Deku, Ochaco, Bakugo, Ida, Tsuya and Todoroki featuring a hostage situation.

True to form, Ochaco is recon, Todoroki is talking with the kidnapper, and Bakugo rushes in and explodes stuff. Then the episode turns into, of all things….a murder mystery. The kidnapper (All Might in disguise, great design btw) is KILLED, and the three hostages are the suspected killers. We go straight Ace Attorney/Danganronpa as we interview the there hostage teachers, all played by Present Mic, Midnight and Cementoss, all of which are sporting amusing fake personas and casual wear.

It’s a lot of questioning as Deku goes full Sherlock Holmes to get to the bottom of things, before deducing that the Kidnapper and Midnight’s characters had a relationship, that she called the cops and he took his life before this secret was exposed. However, it turns out the villain was still alive and fled, meaning Deku was wrong, meaning…meaning it’s not clear what the point of any of this was, actually. This episode felt like a premise the show was mandated to do and tried to get it over with as soon as possible, and it’s just not that interesting. I’m looking forward to getting back to the fighting-while-rescuing action of the exam next week.