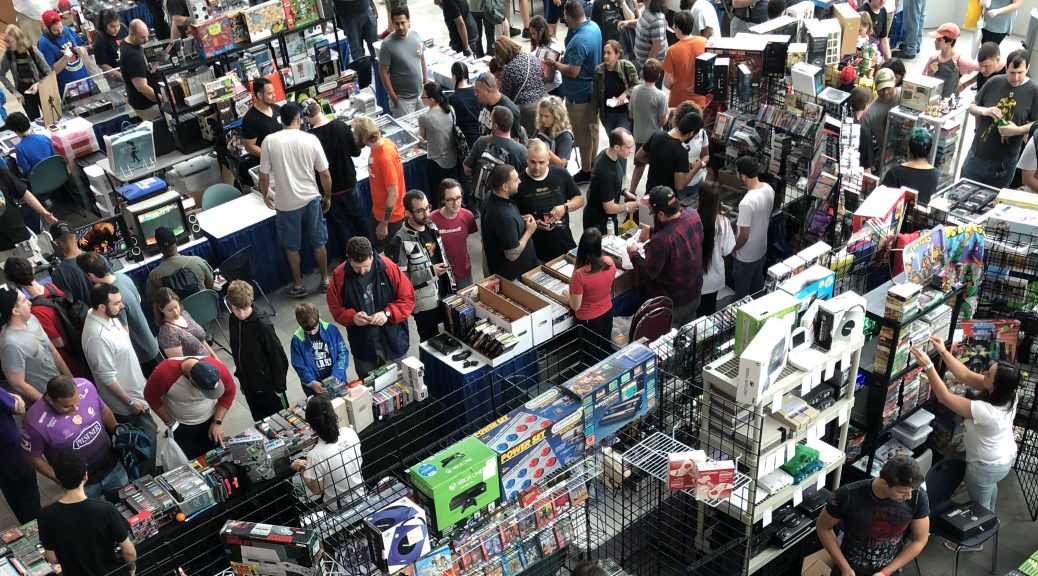 The Long Island Retro Gaming Expo is probably the warmest convention I’ve ever been to. I’m not referring to the ambient temperature; the AC was working fine (and in the Planetarium, arguably too well.) I mean it felt warm in the sense of being incredibly inviting and friendly. Part of this is no doubt due to the efforts of the con organizers (who deserve plenty of credit for putting together a great event), but I think it’s also due to what the gaming community looks like in 2018.

You had babies in strollers clutching beloved Pikachu plushies, little kids wearing Mario t-shirts, older men and women who vividly remembered playing their Magnavox Odyssey in the ’70s, and everything in between. It was really a family event, not just because there was all-ages programming, but simply because there were a whole lot of families walking around. You had hardcore game collectors, anime cosplayers, tabletop enthusiasts, professional game historians, indie game developers, and little kids who just wanted to play Sonic all day long, and everyone seemed to be having a wonderful time together. I know that this one convention does not represent the state of gamer culture in the entire world, but the attendance at this event couldn’t be further from the stereotype of the stand-offish, “toxic” gamer.

The whole second floor of the Cradle of Aviation Museum in Garden City, NY was filled with dozens and dozens of consoles playing retro games. There were also plenty of classic Arcade cabinets.

The main Freeplay arcade area, minutes before the doors opened at 10 a.m.; once the con was open, it was standing-room only in here.

Even though the con is primarily focused on the gaming of yesteryear, there was plenty of talk at panels about recent developments in the industry. About half the convention was in morning after the apparent Death of Luigi during Nintendo Direct; streamer Vinesauce even held a “moment of silence” for Luigi during his panel. (It lasted about one second, but hey, it’s the thought that counts, right?) More importantly, everyone was talking about Nintendo’s aggressive targeting of ROM sites; in some cases, it came up because I asked about it specifically, but a lot of other congoers broached the subject during Q&A sessions as well.

While no one condemned Nintendo for shutting down emulation sites, many guests expressed concerns about how this move could effect the preservation of video game history.

“Taking such a broad approach to the issue does actual harm to the medium,” said Jeremy Parish of the Retronauts podcast. “As it is, it feels like they’re cutting off access to the past.” Parish went on to suggest that Nintendo continue taking down ROMs of their own games, but perhaps allow ROMs for more obscure titles to remain available.

From left to right: Jeremy Parish and Bob Mackey of Retronauts, and Kurt Kalata, Editor-in-Chief of Hardcore Gaming 101. Their panel covered the history of SuperJoe.

“This is a tricky topic….there are some games that are out of print, that the only people that would be making money from them are second-hand sellers– for like $400, for some of these games,” said @VinnyVincesauce, a popular streamer. “So you want a game that is, let’s say, from 1989, that you can’t get on the Virtual Console, that you can’t legally own. Now they’re making it harder for you to get it, so it’s just gone now.” 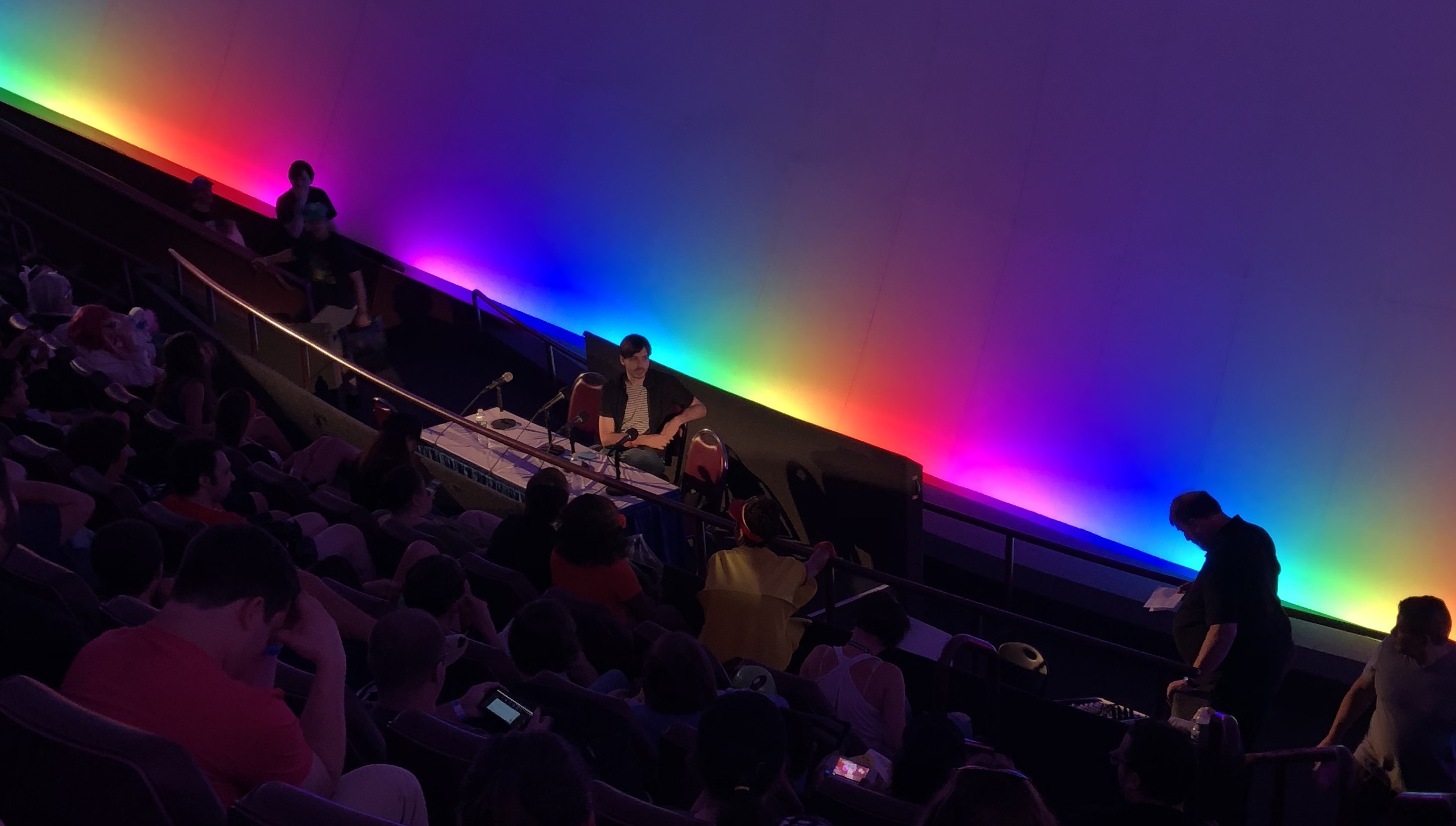 To Vinny’s surprise, the Vinesauce panel filled pretty much the entire Planetarium at the museum. This was about as close as I could get.

Leonard Herman, video game scholar and author of Phoenix IV: The History of The Videogame Industry, had a different perspective on Nintendo’s actions. “I’m for that…As a writer, you have copyrighted materials. The copyright lasts the life of the person who wrote it plus 50 years, and whether you’re making money on it–whether it’s available or not– those copyrights should be preserved. And I found my book, the earlier editions, on the internet for download, and it infuriates me…not that I’m losing a sale…I just don’t believe, unless the person who put it out agrees to it, I don’t agree with that.” 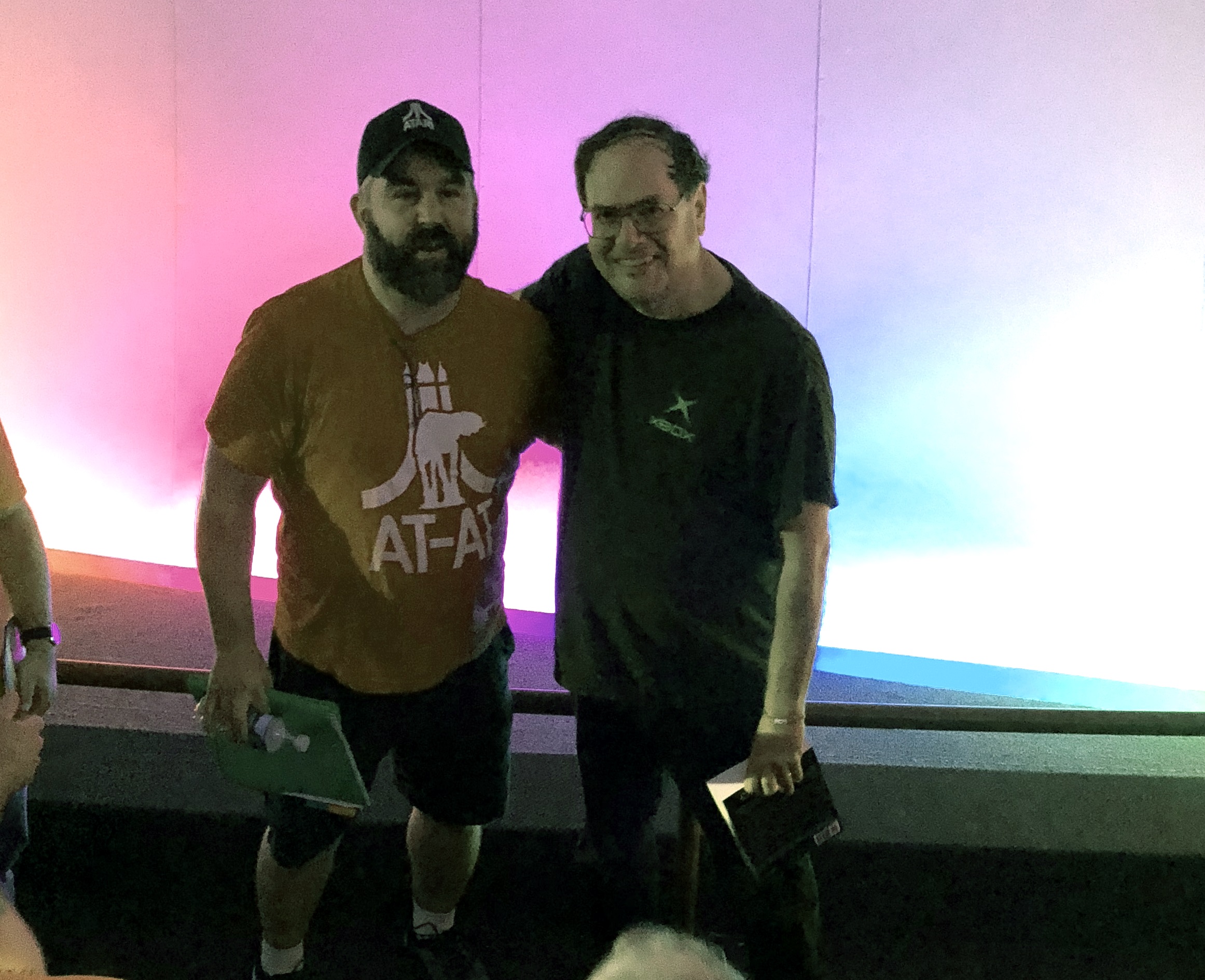 Right: Video game collector and educator John Hancock, and Leonard Herman, known as the Father of Videogame History. Their panel together covered not only milestones in video game history, but how to dispel misconceptions about videogames and disseminate the facts instead.

“I’m torn, because as a preservationist, emulators are the only way to play prototypes and hacks and all that stuff, and I think that’s awesome,” said game collector John Hancock, Herman’s co-panelist. He went on to say how frustrated he was as a collector to see Nintendo pass on the opportunity to allow people to legally purchase ROMs for individual games, and instead focus on “half-baked” options like the NES Classic. “It frustrates me to no end.”

Shawn Long, better known as RGT85 on Youtube, also lamented the inability to legally purchase older games directly from Nintendo, using the example of Mario Sunshine for the Gamecube. “This should be done more on a case-by-case basis,” said Long, echoing what Parish had said earlier in the convention.

Naturally, there were plenty of other things to talk about besides Nintendo’s recent shenanigans. Pete Dorr of Pete’s Game Room hosted a very entertaining panel about collecting games for older systems, speed-running, and finding underrated gems in older console libraries. He has also very nearly convinced me that I need to speedrun Ehrgeiz: The Forsaken Dungeon, so if you hear any tortured screaming coming vaguely from the Tri-State Area, know that it’s all Pete’s fault.

The guys from the Stone Age Gamer podcast used their panel to pit controller-against-controller in a no-holds-barred Best of 16, “The Best WORST Controller.” With the help of the audience, they picked the Dreamcast controller as their favorite “bad” controller; personally, I think the fix may have been in for the Dreamcast from the start, but I will give the SAG guys the benefit of the doubt here. 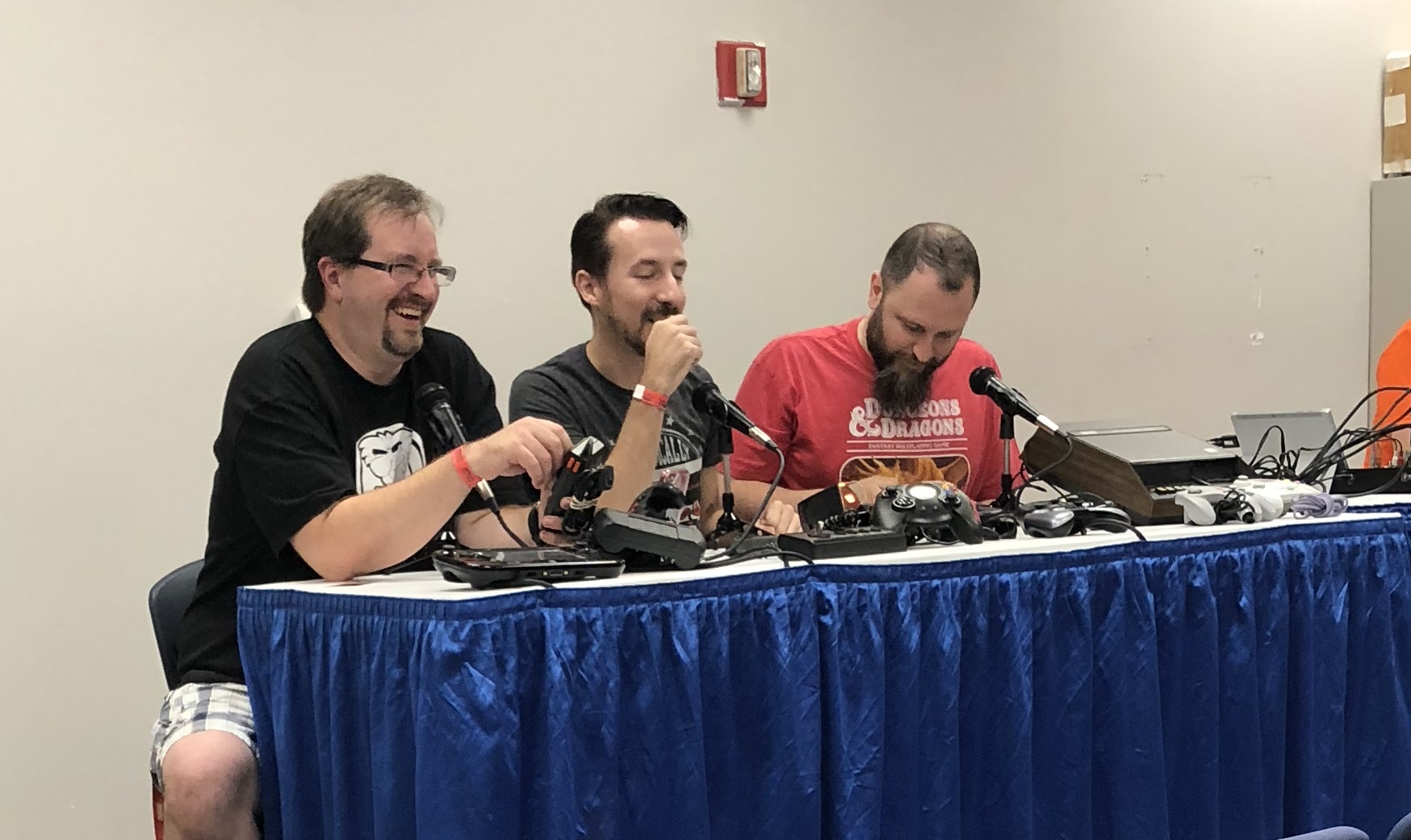 I even got to attend a panel on NESMaker, something I didn’t know existed before this convention. Software that allows you to make videogames without coding has proliferated in recent years, but what makes NESMaker particularly special is that you can burn your creation to an actual cartridge and play it on an NES console; obviously, you need to invest in some hardware to be able to take advantage of that particular feature, but it’s pretty amazing to me that this is even possible. In terms of features, the program looks to me like it has a lot in common with RPG Maker, although with fewer options; however, that might be a good thing. Apparently you can knock out a game in NESMaker in a weekend if you feel like it, whereas RPG Maker can consume your entire life if you let it (believe me, I know this from experience.) I’m not sure if I’m quite ready to drop $36 on the software myself, but for hardcore NES-era fans, this looks like a dream come true.

I have some other stuff from the con to post for you: keep an eye out for cosplay photos and my pick ups from the dealers room (aka “The Reason Karen Can Not Afford to Go To Conventions Anymore). Now I’m going to go obsessively look up information on speedrunning, because surely I can find the time to fit that into my schedule, right? Don’t answer that.