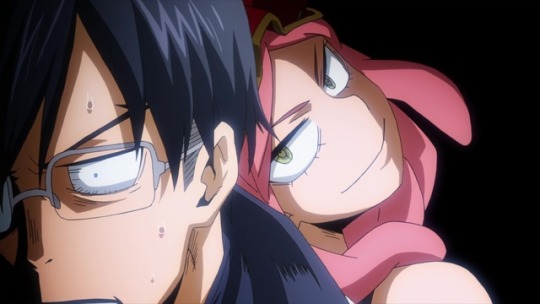 Going to be doing a bit of a double duty catchup for this one. The new cour of My Hero Academia’s third season has started and we begin it, like any other, with a brand-spanking-new opening: Make my story, by Lenny Code Fiction. It’s got a really sick opening riff, along with a lot of really cool foreshadowed visuals and some nice bits of animation. Good tune and strong visuals, so I give this one a Plus, not necessarily a Plus Ultra.

We begin the first episode with a demonstration of life going back to normal, while the students adjust to their new lives at UA’s Alliance Heights dorm halls. Classes resume, and the first thing on the docket is to work towards achieving provisional licenses. One of the first things they need to do towards that goal is doing the very thing this episode is called: “Creating Those Ultimate Moves.” In practice, this means that the teachers offer students advice about how to reinvent their own understanding of the quirks.

A superhero’s ultimate move is about more than just looking cool and flashy. It’s also about cementing your identity, refining your abilities, and showing something that represents what you are as a hero. It’s like how the Kamehameha wave is so ingrained with the image of DBZ and Goku; you want a move that’s so synonymous with who YOU are that making a move is equivalent to screaming out out “I Am Here!” to the world, and that’s a really neat thing.

Some of the students are able to gradually come up with new cool uses of their abilities, like Bakugo’s AP Shot, Mina’s Acid Nozzle, Tokoyami’s Shadow Stand, and Mineta’s…Sword of Grapes (which honestly just looks suspiciously inappropriate in it’s design, and was super intentional). But we’re shown two major conflicts in the form of both Deku and All Might’s recent developments.

All Might has to deal with the fact that he’s officially a teacher first and foremost, not only to Deku but also to the other students of 1-A, as he does his best to offer critical advice without overstepping his boundaries and showing favoritism. He even got himself a copy of a  Teaching for Dummies. But you can definitely tell it is still rather difficult for him to adjust to his newfound role as a mentor while being completely retired as a superhero.

As for Deku, he’s trying to find a new way to both be a hero and stop imitating All Might, especially with news that if he overexerts his arms any more he’ll have permanent, irreversible damage. That problems leads him to rediscovering an old friend from the Sports Festival, Mei Hatsume. She’s at the center of this episode’s comedic levity, leading to some solid visual gags, expressions, and potentially even some romantic tension in the mix for Deku and Ochaco. She’s a mad scientist excited to use any and all available test subjects for her experimental “babies,” and she’s just an absolute riot every time she appears.

After spending some time with her, Deku has a breakthrough about how to both reinvent his own fighting style and his costume: Instead of trying to just be All Might, he decides that he should try being Sanji instead, by fighting with KICKS! While kind of silly, it’s actually a genuinely cool moment where he has to step in and save All Might from falling debris, revealing his a snazzy new costume in the process. Deku’s new SHOOT STYLE technique is a logical reinvention of his fighting style; it both makes sense and works within consideration of his weakened arms.

This episode features a lot of setup, but it’s still really neat to see the way these characters continue to evolve regularly as this show goes on. It’s pretty standard fare, but there’s some solid jokes and visual gags, plus interesting stuff about the importance of Ultimate Moves and how one goes about updating one’s costume. It’s a lot of worldbuilding, but very importantly, it’s good worldbuilding. 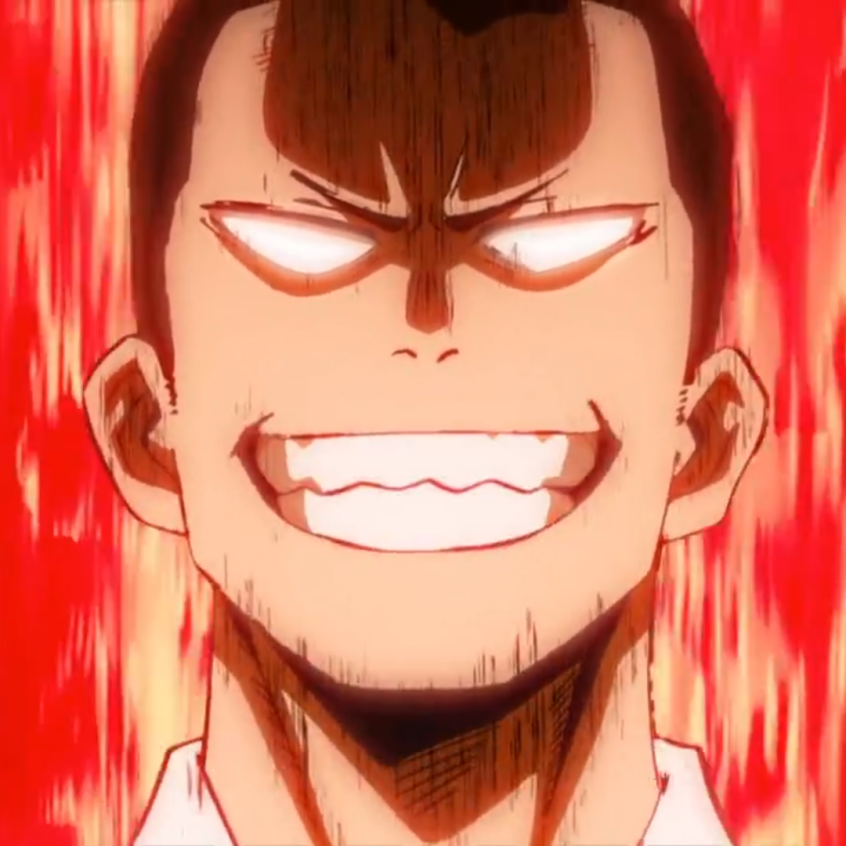 We see the aftermath of Deku’s reveal, alongside quick reveals about Kaminari and Kirshima’s new costumes (and I especially like Kirishima’s new design) but they don’t have time to explain it as Class-B has to train now. They’ll take the exam while at a different location from others in the school, so that no group has to clash too much. Monoma, the ass face from the Class 1-B, is both happy and relieved by this.

Plus we also get some casual banter among the ladies of 1-A about their training, while they don some casual garb, with Momo’s hair down and Tsuyu’s froggy bun style, alongside some romantic conversation. Ochaco admits to spacing out a bunch while Mina is able to tell clearly that yeah, she’s got feelings for someone, and she floats away in embarrassment. Small thing: while we, the viewers, know it’s Izuku she’s into, I appreciate there’s enough plausible deniability here that the girls feel it could be either Izuku or Tenya, as the trio all hang out regularly together. That’s just a nice little detail that could have been easily overlooked.

As the day of the exam arrives, there’s several new characters to introduce; naturally, since this exam has about 1500 applicants from all over the place. [Editor’s Note: Oh my God, how long is this series gonna be? I thought I could catch up!]

First up: Inasa. An eccentric guy who jumps into the conversation, and SLAMS HIS HEAD IN APOLOGY from a super popular school in the West: Shiketsu, one that rivals UA in its elite hero program. He’s got a splitting headache, but he’s strong and impressive enough to have been considered to apply to UA via recommendations, much like Todoroki and Momo. Goofy and charismatic, but strong enough to have been considered for UA, he has potential to be interesting.

Next up: a pro-hero who serves as the bane of Aizawa’s existence. She enjoys messing around with him, constantly expecting a major reaction out of him and often asking to get married. She’s eccentric and goofy, while he’s stoic and tired, and they make a great comic duo. She herself is a teacher at another school, Ketsubutsu Academy with a class of second-years, with slightly more experience than 1-A.

Then there’s one of her students, Shindo, A friendly guy with a pretty face (who kind of looks like a Dark, Cooler version of Deku in a weird way). He tries to be friendly and spark a conversation, but Bakugo quickly catches on that he’s being disingenuous and doesn’t truly mean what he says.

This arc is big with a lot of moving parts and new characters, and some weird exam rules. There’s a lot to digest, and the first round of the exam is revealed to be even crazier than you might have thought.

Everyone gets 3 mini-targets, and 6 rubber balls to hit the targets. Once all three targets on the body are hit, you’re out. Students need to knock out a minimum of two opponents to pass onto round 2. By the end of the exam, only 100 are expected to pass. The building opens up to reveal a major colosseum of obstacles, and everyone’s off to the races to embark on a time honored tradition (albeit one that Aizawa felt no need to mention to his students.)

At first it looks like things are going to play out a lot like the Sports Festival, but Aizawa knows his children: they’ve improved and can kick some major ass. As some students depart, Deku finds himself in a position of leadership to rally the class and take on the world as the episode ends. The two episodes have laid some important groundwork, but get ready for the real action to begin next week.