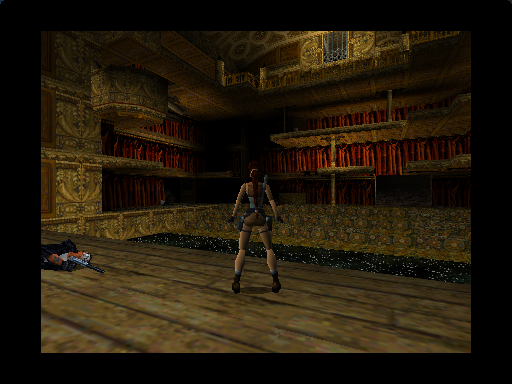 There’s something intimidating about this level. Starting from the very first area, I always expect it to be a lot harder than it is. Yes, there are a couple of areas where you can easily kill Lara over and over again, generally while trying to avoid swinging crates/blocks/whatever, but it’s not actually that devious; most of where you need to go is laid out in plain sight, and you get fair warning before most of the traps. The amount of gun-toting enemies is a little bit insane, but you usually have enough space to move around that you can out-maneuver enemies if you’re smart about it.

Still, I was a bit apprehensive about getting up to this level, and I’m kind of glad it’s over now. My degree of nervousness towards this level is probably equivalent to how I would feel if I were to attend an actual opera and had to pretend I was enjoying it.

The Ghost of Opera Past 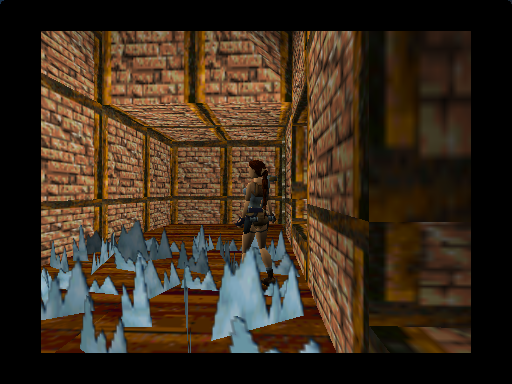 Blades of broken glass that come up to your thigh, and we’re not even in lobby yet? This is why no one goes to the opera anymore.

I’ve spoken before about how I prefer it when this series sticks to tombs instead of modern areas, but one thing I didn’t realize until this playthrough is that Opera House actually kind of works as a tomb. Think about it; opera is close to being a dead art form. Yes, operas are still performed, all over the world, but they only appeal to a very small percentage of the population. As far as popular culture is concerned, opera is dead as a doornail.

Once you start thinking about this level as symbolizing the demise of opera as an art form, instead of “random building where a stupid amount of Bartoli’s thugs are hanging out,” it starts to feel much more like a proper Tomb Raider level. I especially like the fact that the orchestra pit has been flooded; it’s like nature is reclaiming the theater, one tiny step at a time. I can’t decide if the frequent boulder traps work as part of this, or if they’re just ridiculous; right now I’m leaning towards ridiculous. 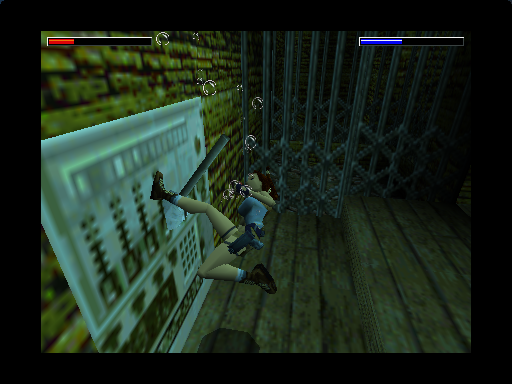 This is one of the only mid-animation screenshots of Lara I have ever managed to take. Don’t take this screenshot, it’s mine! I’m proud of it!

Did Bartoli and his group kick a theatrical company out of this theater? From the looks of things, this was a derelict building long before Bartoli & Co. got here. Friends, this is why we must always support the performing arts, in all their forms; if you abandon a theater and let it fall into disrepair, next thing you know it’s become a nest for ripped, dragon-obsessed cultists. Don’t let this happen to your local community theater, unless their version of Fiddler on the Roof is really just intolerable. 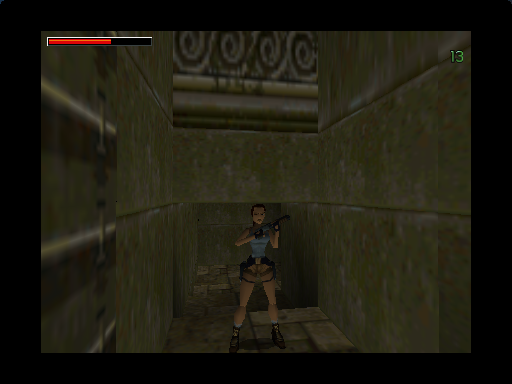 This shot has nothing to do with the topic of this section, I’m just happy that I got a screen of Lara facing forward for once.

Another interesting thing about this level is that it strongly illustrates a problem not just with Tomb Raider games, but with this kind of adventure game in general; sometimes, you don’t realize where you can access. When I first played this, I was stuck on the audience side of the theater for a long time, because I didn’t realize the stage was accessible; you can do a running jump from one of the balconies onto the stage, but it doesn’t look like you’re supposed to, so I didn’t try. I don’t remember how I got out of this; the strategy guide might have been involved.

I can’t tell you how many times this has happened to me in Tomb Raider. “Gee, if I could get over to that ledge over there I bet that’s where the key I need is, but I can’t get there from here.” *insert an eternity of frenzied running around, followed by a desperate running jump to the ledge; it works.* “Oh, looks like I could get here all along; shame I’ll never get that hour of my life back that I spent looking for an alternate route.”

Am I the only one who has this problem? Maybe this isn’t an inherent problem with the game, and I just have really bad spacial reasoning skills? It’s possible. 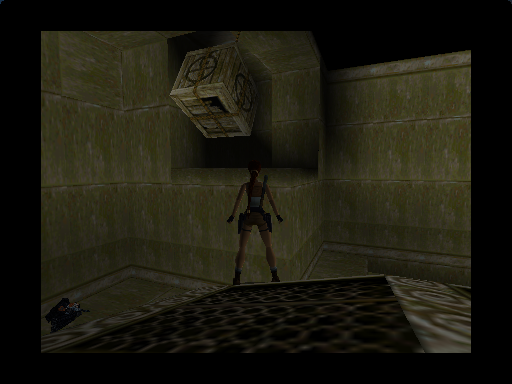 I can’t tell you how many times I got Lara killed by this stupid swinging crate.

The main environmental hazard on this level is swinging items, either crates or sandbags. I find them irritating to deal with, but they’re pretty funny if you consider that the other main threat to Lara’s health on this level is tons of bad guys packing heavy weaponry. So while ruthless thugs with large guns just plink-plink-plink away at Lara’s health, like it’s no big deal, being grazed by a slowly-moving sandbag is equivalent to a death touch. Maybe Lara is just highly allergic to sawdust, who knows.

This is where the decision to institute the “save anywhere” system in this game really pays off, by the way. If you had these traps in the original Tomb Raider, and you had to memorize the timing for several of them in between each save crystal, no one would have finished Tomb Raider. I shudder to think what playing this level would be like if you couldn’t save anywhere you wanted…wait…actually, I know exactly what it would be like. It would be like Tomb Raider III. I’m trying to save my lamentations about TRIII until I actually get up to it chronologically, so I’ll leave it at that.

Immersion, This is Not 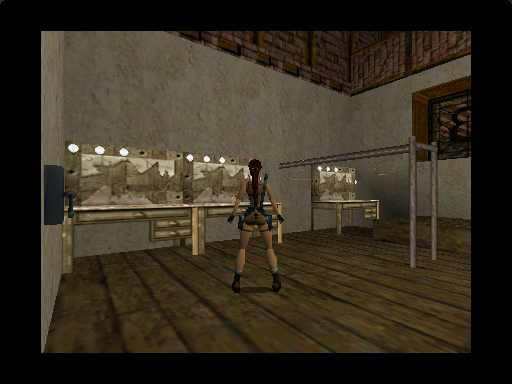 I wouldn’t call this level a complete failure on the graphics front, but it has a lot of issues. The main lobby area is pretty nice, but most of the side areas look pretty half-assed and unconvincing. The area above is supposed to be a dressing room (I think?), but it doesn’t really look like much of anything. The level is also frequently very dark, and while I know flares were invented for this purpose, it still bugs me. 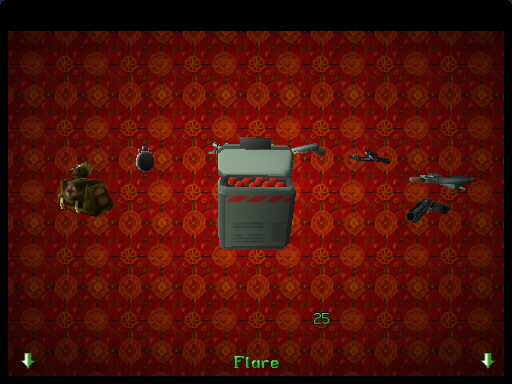 I think I used three flares to get the Stone Dragon: three. Because the underwater area is pitch-dark, and you can’t use the cheap lighting effect of constantly firing Lara’s pistols while she’s swimming. I think collecting all the secrets is more important than hoarding flares, but there’s a part of me that always just wants more flares, like they’re candy.

Gunfighting For Profit, Not Fun 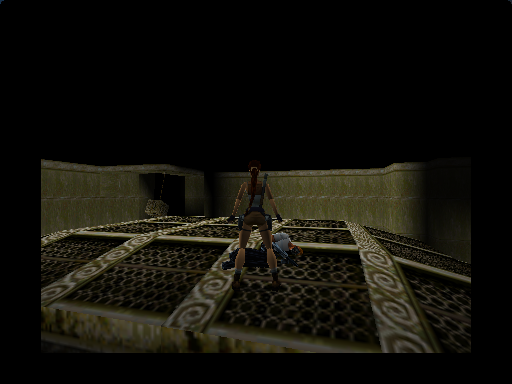 Since we spend so much of this level shooting it out with bad guys, this is a good time to talk about how combat in TRII works. Sometimes you can target enemies from far away and finish them off before they get close to Lara; that’s optimum. Sometimes though you have no choice but to get down and dirty, in which case it becomes a game-within-a-game of trying to exploit the enemies AI. If a foe isn’t facing Lara, he has to laboriously turn around, allowing the player to get a ton of free shots at the enemies back. With a little bit of luck, and judicious use of the roll button, it’s possible to take out a gun-toting enemy without taking any damage; just keep them turning in place.

That said, if an enemy gets the jump on you, a whole section of Lara’s health can be gone before you’re oriented properly to start screwing with the foe’s AI, plus there’s numerous other ways to mess up. Once I fell into the water-filled orchestra pit, allowing the guy on stage to take tons of potshots at me while I tried to swim away; I ended up reloading that time.

Given the save-anywhere system, it’s possible to save before every fight and make sure that Lara takes minimal damage. However, that also kills the spontaneity of the game; taking some damage and sucking a medipack is part of the experience. Basically if I really screw up, by letting the enemies get the jump on me and taking out all my health, I reload; if I take some damage from enemies while I’m trying to outfox them, well, that’s the cost of doing business. 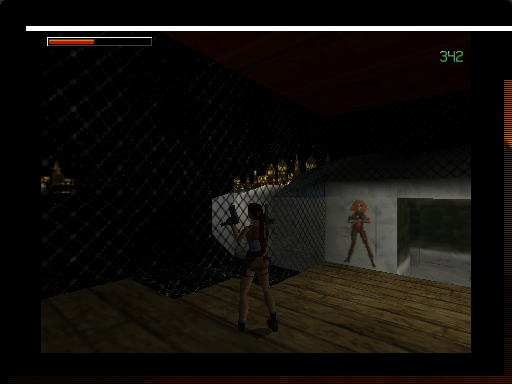 Nice little detail I never noticed before now; if you look carefully, you can see the city skyline before you get on Bartoli’s plane. 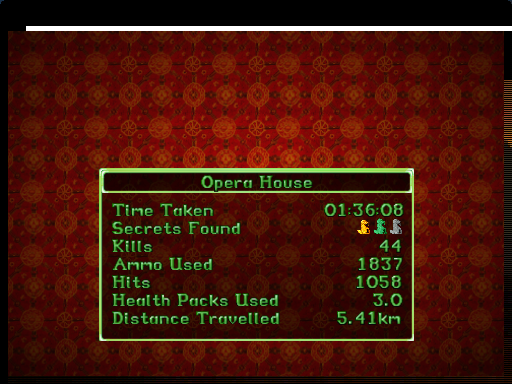 At the end of the level is a cutscene I’ve never really understood because I can’t make out any of the NPC accents in this game, but short version: Lara hitches a ride on Bartoli’s plane, hears Bartoli talking about how everyone must have faith in his Great Dragon Destiny, and gets konked over the head by a muscle-bound baddy. I guess as good as she is, even Lara doesn’t have eyes in the back of her head. 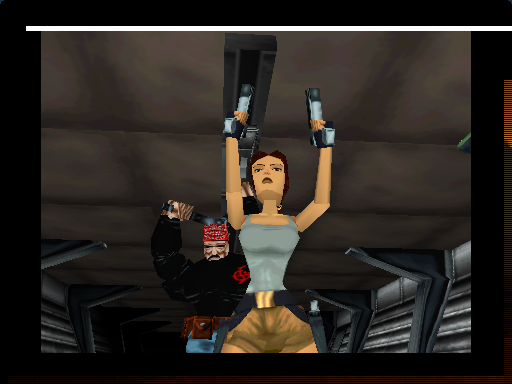 Best: The whole elevator section. Once you’ve found the Relay Box and the elevator becomes functional again, there’s something really cool about riding the elevator down to visit an area you saw (but couldn’t access) earlier in the level. The fact that playing around with the elevator leads to a secret is just icing on the cake.

Worst: That last sandbag trap right before the end of the level. By this point, everyone is just tired of this marathon level and wants to be done with it, only you have to try to figure out how to time your jump so the slow-moving Sandbag of Death doesn’t disembowel Lara, and it’s just so tiresome. Let me on the plane already! I’m ready to have all my guns taken and shoved underwater, anything to make this stop!

Rating: Two Uzi Clips out of Five. I feel like this level earns at least two for pure ambition, but I just don’t enjoy playing it very much. I almost rated it a 3, but it loses a clip for poor graphics in many areas.

Next Up: With Offshore Rig, my bitching about how much I dislike the whole underwater section of this game begins. If no one wants to keep reading, I’ll understand.