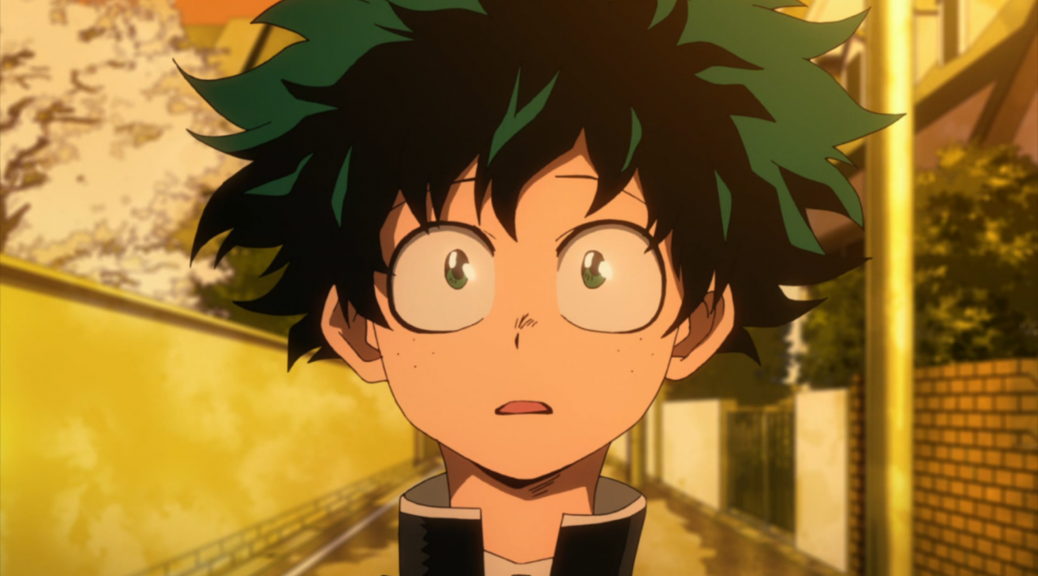 [Hey guys, this is Andrew’s first post for Otakusphere. He’s a life-long anime fan with eclectic tastes who’s going to be covering My Hero Academia for us. Before getting caught up in episodic posts, we wanted to take a moment to let Andrew talk about what first drew him to the series.]

A phrase so simple, yet so powerful. Both in the context of the scene  itself, and what it’s come to mean to fans of the show. This was the moment that I felt this was going to be something very, very special.

But let’s start from the top. 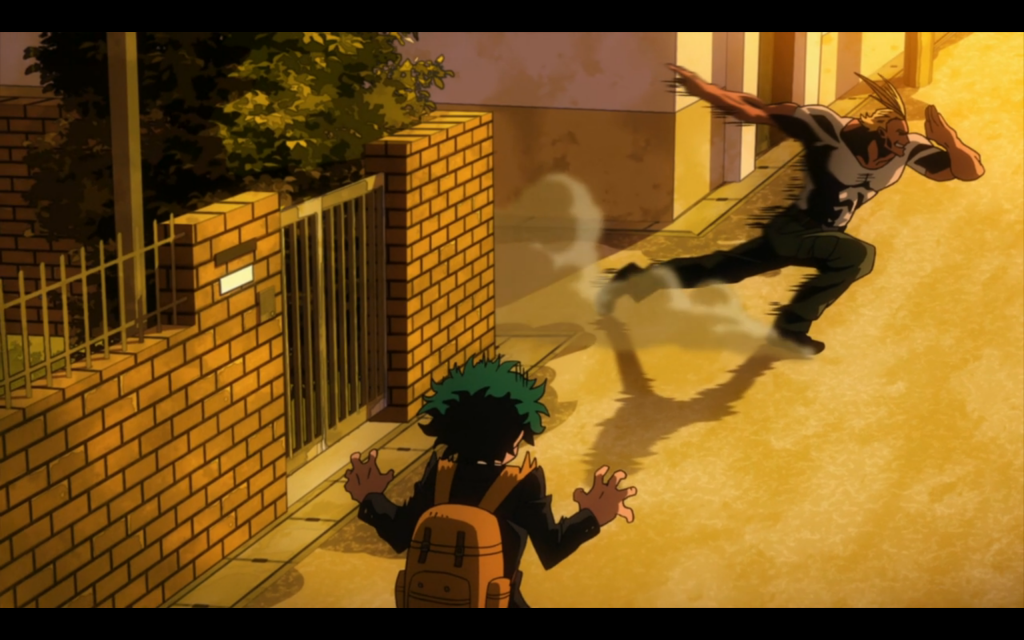 My Hero Academia premiered in Weekly Shonen Jump magazine about 4 years ago, the magazine home to such monster hits as Naruto, One Piece, Dragonball, Jojo’s Bizarre Adventure and many more. Written by Kohei Horikoshi, MHA tells the story of a world where 80% of the world have superhuman powers called Quirks and Superheroes have become a regular profession; they have about the same level of authority as civil servants, like firefighters or police officers.

Izuku Midoriya is one of those 20% born without a quirk, despite his dream to be a hero all his own, much like his idol, All Might: a symbol of peace and one who represents the very best and brightest of heroism. One day, the two have a chance encounter that changes his life.

That’s the initial premise, and after some gradual buildup it becomes a Battle Shonen school setting with all of the friendships, rivalries, tournaments, awesome fights and major conflicts that are typical of the genre. But to say that MHA uses bog-standard genre trappings feels dishonest, in a way; the implication is that the show is uninspired because of the use of those tropes, or perhaps uses them poorly. I feel the opposite: To me, this is the show that reminded me what good shonen anime is truly capable of, and why so many classic series worked so well in the first place. It’s not the awesome action scenes that made the show resonate with me; it’s the show’s emotional core, which is always front and center.

Izuku Midoriya, given the nickname Deku, is effectively judged at a young age to be worthless, broken, and strange. He has no power or ability, therefore he’s seen as an outcast. His struggle to reach his dreams, despite not having powers, feels real, painful, and inspiring, all at once. The powerful All Might seems like the opposite of Deku, but he’s revealed to be much weaker than he lets on; His muscular form can only be sustained for so long, and he reverts to a skeletal stick figure of a man when not saving others.

All Might at first writes off Izuku as someone who has no chance at being a hero without a superpower.  However, during a major fight with a kidnapped student from Deku’s school, All Might cannot sustain his muscle form long enough to help. Everyone is helpless and has no clue what to do, until little Izuku– the powerless, quirkless little boy– rushes into the fray, to save a kid who has bullied him for years. He selflessly rushes in, when those with powers around him are unable or unwilling to rush to his aid, prompting All Might to act. 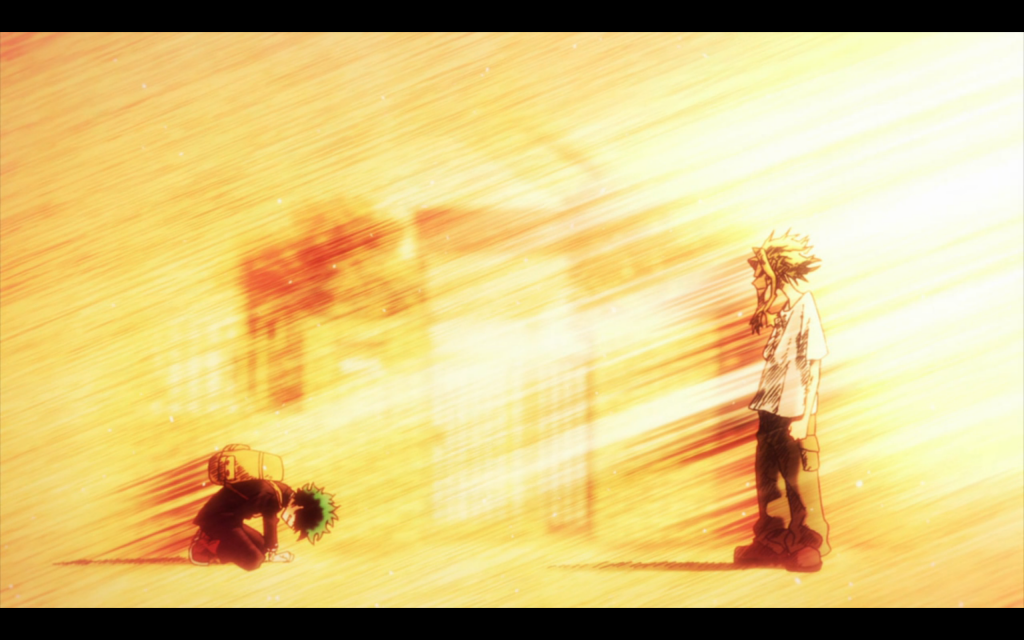 Which leads to the scene we started with: All Might commends Deku, even if no one else will, because while what Deku did was reckless(or even stupid), All Might saw something no one else did. He saw that Deku is the kind of person who is willing to rush in and react before he could think, all for the sole purpose of saving another. And in that moment, this kid…this kid, who had been told all his life that he could never reach his dream, that he could never do anything, that he was never going anywhere. Now someone he respected deeply had told him that he had the power to reach his dreams, and become a hero in a way that no one else could.

There’s so much I could write about when it comes to My Hero Academia, but that one moment spoke to my very core. I hadn’t felt that strongly about anything in a show for a long time, then this scene hit me in a way I didn’t think was possible. Izuku is sympathic to anyone who has ever felt loss, felt lesser, or looked down upon by society. No matter what your particular challenge is; be it a disability, mental illness, or a history of bullying– Izuku is someone you can see yourself in. And when All Might (so proud, noble, and respected) told him he could achieve his dreams?  It melted my heart. And I knew I was in love with My Hero Academia from the start.

Early on, the show endears you to the main character’s struggle. But even as the story goes on, you’re so engaged with him the whole way that it makes the entire journey, from zero to hero, so gratifying. All the battles, all the friendships, all the amazing moments he earns feel rewarding in a way that’s truly unusual. In a few episodes this show does to me what other series struggle to do for their entire runs.

There’s enough aspects of the world, characters, or the way the show tackles storytelling that could warrant their own article. [Editor’s note: I want that article. Get busy!] I am just here to say that I am a big MHA fan, caught up with the latest manga chapters, own all current English volumes of the manga and the collector’s editions for both Seasons 1 and 2 of the anime. Obviously, this is a series I’m greatly invested in, and I know that it has many more great stories to tell in the coming weeks. I hope you’ll join me.