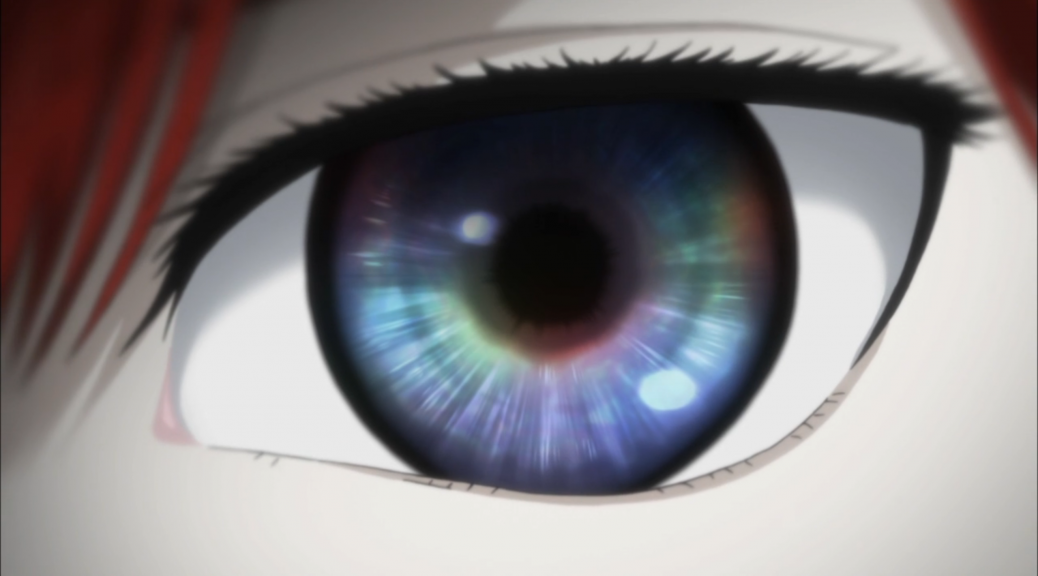 I haven’t been too enamored of any of the Summer anime I’ve seen so far, so this seems like a good time to dip into some things I’ve been meaning to watch for a while. Steins;Gate 0 started airing in the spring, and even though I’m a huge fan of the original series, I didn’t watch it. I didn’t watch it for a kind of stupid reason, now that I think about it.

See this show is an alternate timeline from the original, and I didn’t feel as tempted to watch the show as I would have if it were “canon,” so to speak. But now that I’m watching Steins;Gate again, I realize that making these kind of distinctions between alternate timelines and canon timelines is kind of against the entire spirit of the show. On this show, alternate timelines happen; even when the world line switches, you know the alternate reality is playing out in it’s entirety. In the primary timeline, Makise Kurisu is dead, but Okarin gets to visit a timeline where she’s still alive; the Kurisu in that timeline is very, very important, even if she doesn’t exist in the main reality.

At the end of Steins;Gate, Okabe Rintarou goes back and time and manages to just barely save Kurisu from being murdered. Steins;Gate 0 is the story of what would have happened if he’d failed. I didn’t think I wanted to see a world where Okarin was mourning the woman he loved, but it’s really interesting how well this works as a point of divergence.

The brilliance of the original series is that Okarin goes from being a fake mad scientist (pretend name Houoin Kyouma) who says things like “the organization is out to get me!” and pretends to have vast science-based power over reality, to being the real thing, without ever really meaning to. By the end of the show, Okabe Rintarou is actually more powerful, due to his ability to influence time, than Houoin Kyouma, the character he invented, ever was. He successfully becomes what he always pretended to be, almost by accident. However, in this timeline, once he fails to save Kurisu, he throws Houoin Kyouma and any pretensions of being a powerful figure away; how can he possibly be powerful, if he can’t even save Kurisu from dying at the age of 17?

What we get with Steins;Gate 0 is a version of Okarin who’s not only discarded his alter-ego, but is embarrassed by the very idea of Houoin Kyouma. Having real experience with tinkering with time and causality, he knows too much to boast about what it might be like to have that kind of power. He’s also suffering from PTSD due to everything he went through in the original series, on top of losing Kurisu, so he’s in a very rough place overall. 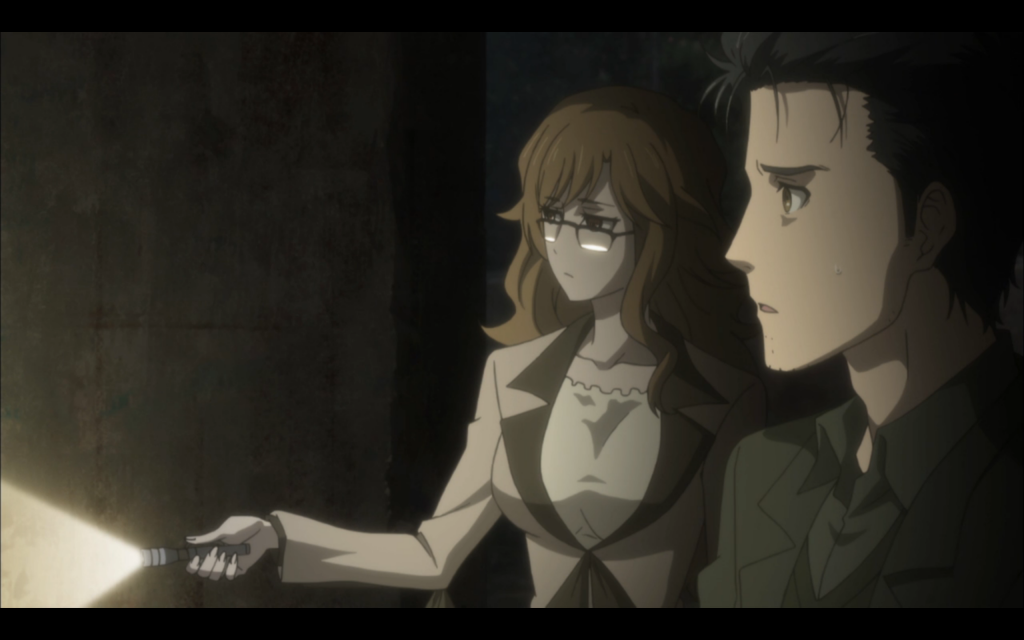 I can’t see Okabe and Moeka together without thinking of that one brutal scene in the original where he nearly beat her senseless; fortunately, Okabe seems to have the same problem, so it’s not like that aspect of the series has been forgotten. Okabe knows he’s gone to some very dark places, even if none of it technically happened from anyone else’s perspective.

What’s great about it is that I think the viewer really wants Okarin to don his trademark lab coat, make a cool pose and do his patented mad scientist laugh; maybe even say his catchphrase “El. Psy. Congroo.” very seriously, despite the fact that it’s gibberish. And I think he will again, someday. But for now, he can’t do it; the part of him that was fanciful and goofy died with Kurisu. I think the series is ultimately going to be about getting that part of himself back, even though that’s not his goal.

Kurisu does have a presence in the show, both in alternate timelines, and in the form of an AI named Amadeus, based on her memories. Amadeus is important, because I think a version of Steins;Gate with no Kurisu at all would just be too depressing, but therein lies the rub; she’s a crutch for the audience, just as she is for Okabe himself. As much as Maho, a likable new character introduced this season, warns Okabe otherwise, we want to believe that Amadeus is somehow the real thing; that she has real feelings, and she’ll fall in love with Okabe all over again. Introducing a Kurisu AI is experimenting with time travel in a different way: if you really could save someone’s memories in a computer, wouldn’t talking to them be like going back in time to when they were alive?

I didn’t realize until I started watching again how much I’d missed the intelligence of Steins;Gate. There are other anime with intelligent scripts, but there’s something special about the way the show toys with our fears and hopes for the future. In fact, Steins;Gate may be a little too intelligent for me, because I have a helluva time figuring out what’s going on. I didn’t really thoroughly understand what happened in the first season until I rewatched, and the same thing will probably happen here. After catching up on the first cour, I said to my husband. “I’m so happy. I’m so confused, but I’m so happy.” 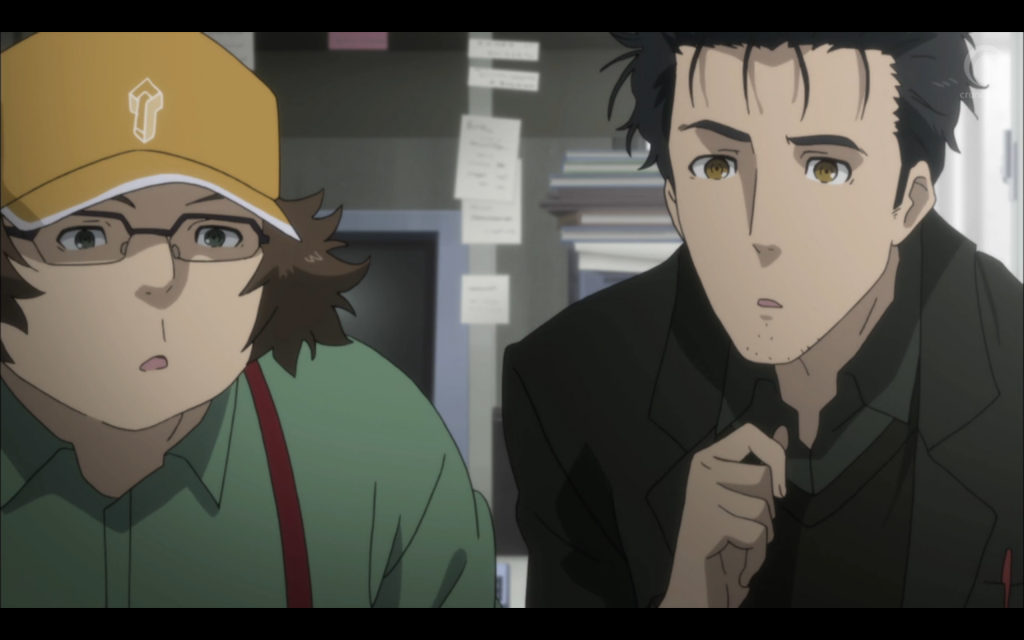 My face whenever I’m trying to figure out what just happened in Steins;Gate, only with more drooling.

Now that DARLING in the FRANXX is over, I’d like to pick up S:G 0 as the new show to write too-long blog posts about. This is a dangerous proposition, since I never know what the hell is going on in S;G, and writing about it at length is going to reveal the extent of my ignorance. After all, I was the person who, during the first series, predicted that Mayuri was an evil mastermind. Granted, I was half-kidding, but still; I was a little off the mark there.

Speaking of Mayuri, she’s busy rolling with the punches, throwing parties and making costumes for everybody like none of the World War III stuff going on is a big deal. It’s implied that Mayuri knows basically what happened in the previous series, but not the details, and this would not work with many characters. With Mayuri though, Okabe could have said “Once I made a time machine that involved sending text messages to the past, except I changed time so that you died, so I had to undo all the messages I ever sent and go back in time to before I invented the time machine,” and Mayuri would just nod and say “Okay!”and not require further explanation. I’m still not convinced if Mayuri is kind of stupid or really, really, really smart, and I think that’s the point. 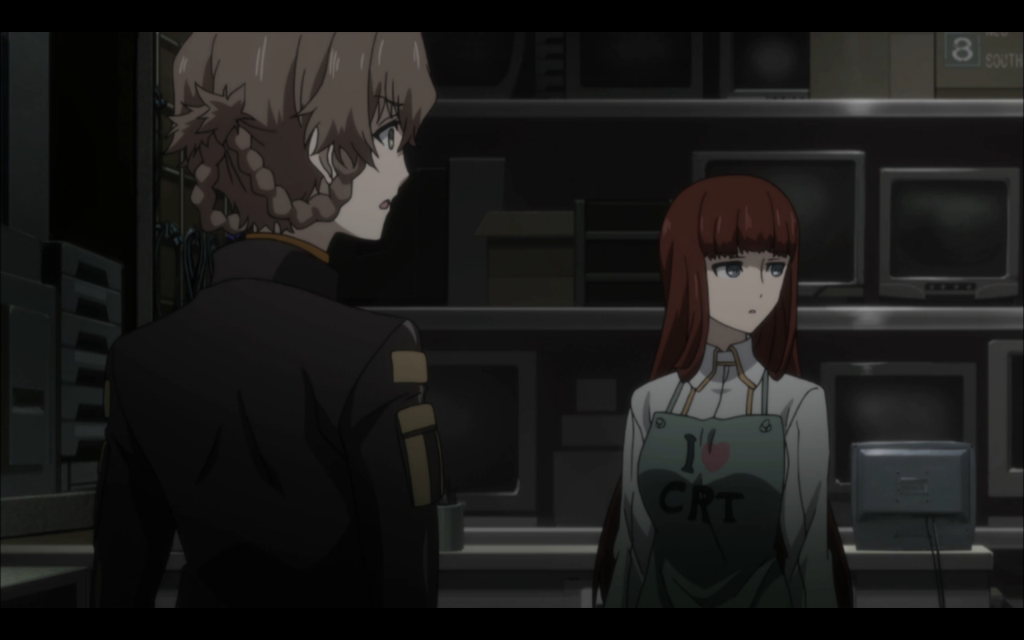 Suzuha and Kagari, wondering how it is that there’s enough demand for CRT TVs (even in 2010) that they can both have jobs in a CRT TV shop. I’m not sure how I feel about Kagari yet, but I don’t think you can watch this show without loving Suzuha.

So yeah, I feel a little dumb for not picking up this show in the spring like I should have, but what can I say: mistakes were made. I watched Uma Musume for some reason, so my judgment regarding what shows to start at the beginning of any given season is a little suspect. (Not to suggest that Uma Musume was horrible, because it wasn’t, but it’s still no Steins;Gate.) Now I just need to catch up on Full Metal Panic and I can count myself among the people who actually watch good anime again…at least, until next season.