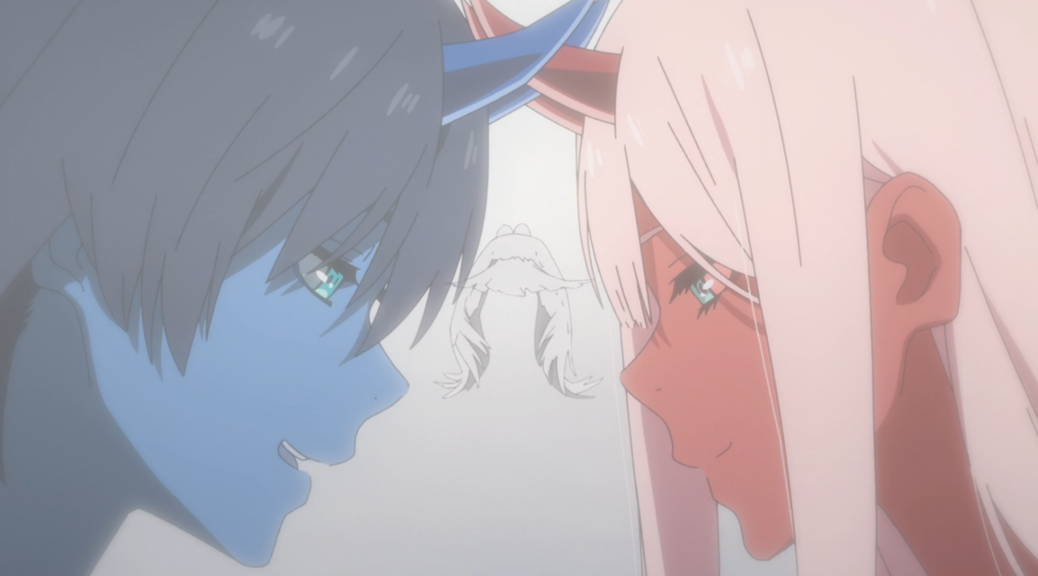 A few missteps aside, I feel like this stayed exactly the show I thought it was all along: all about the beauty of life, specifically the continuation of life through sex, conception and childbirth, with a thin veneer of shiny mecha antics. I know a lot of viewers wanted something else from it, and I can respect that; but for me, this was in my wheelhouse from moment one. 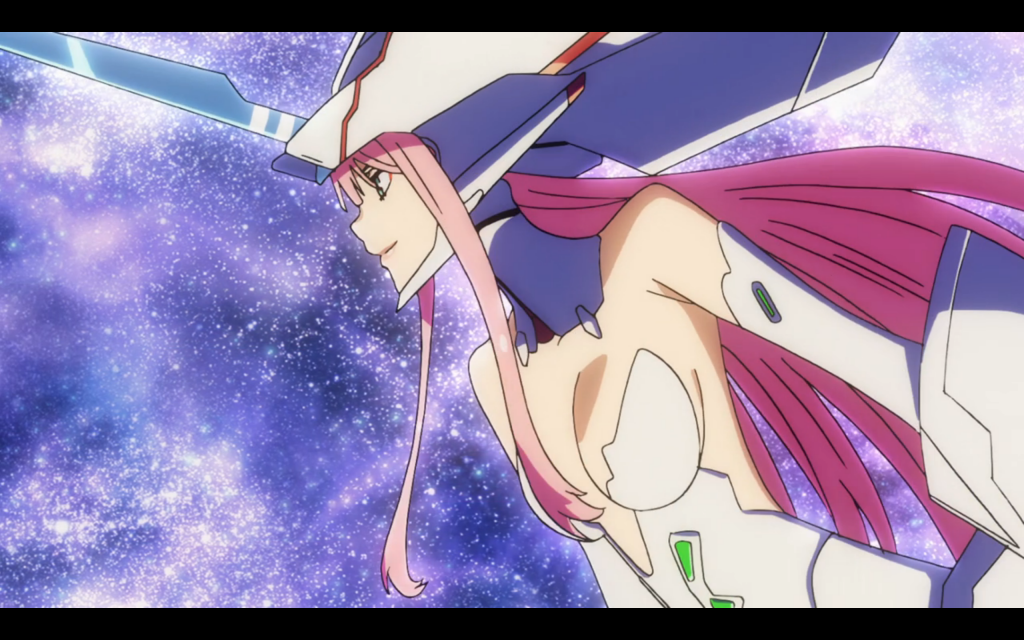 Hiro and Zero Two go on their “honeymoon,” traveling through deep space toward the VIRM homeworld. This is not as unusual a honeymoon as you might think; my honeymoon was spent exploring different aquariums. Space has a lot in common with the bottom of the ocean floor.

They don’t have very much to say to one another, which I have mixed feelings about. On one hand, since they’ve merged (their metaphorical marriage), they’re supposed to be communicating on a deeper level than speech. If neither Hiro or Zero Two says much of interest in this episode, beyond “I love you,” it’s because the real communication going on is supposed to be stuff they couldn’t put into words anyway. I get that, but I think this could have been communicated to the audience better. If this show had been 26 episodes instead of 24, we could have spent a whole episode exploring what it’s like to be inside their heads, but as it stands, we just have to assume the two of them have a rich inner life that we’re not seeing.

Meanwhile, back on Earth, we see the lead-up to Kokoro having her baby, in which Useless Nana manages to actually be helpful for once. See, the future is so bright that even the crappy Nana is being nice! Then the baby’s born and I kind of lose it for a moment. 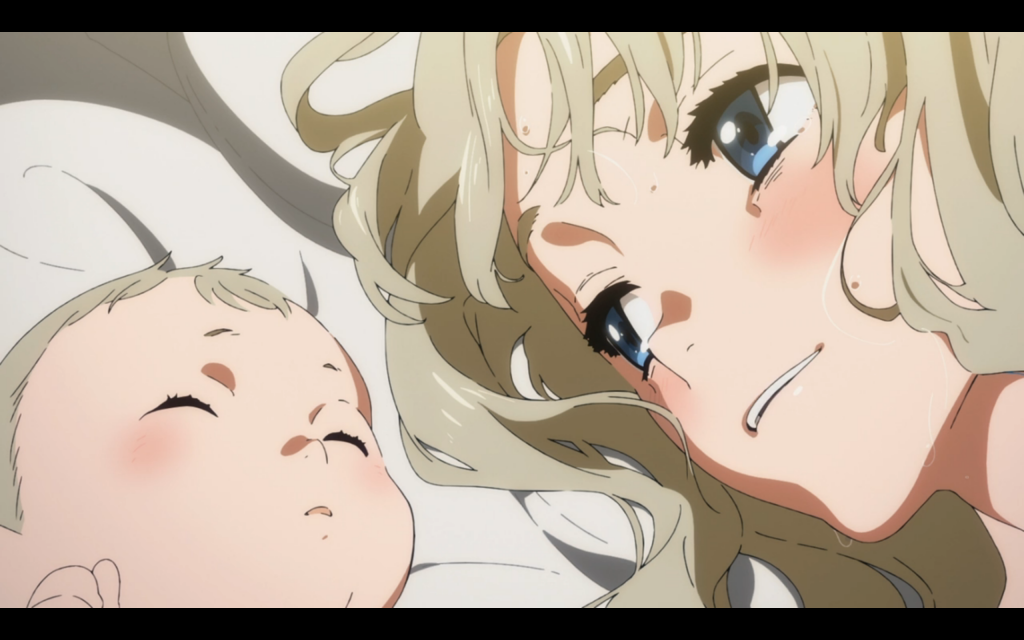 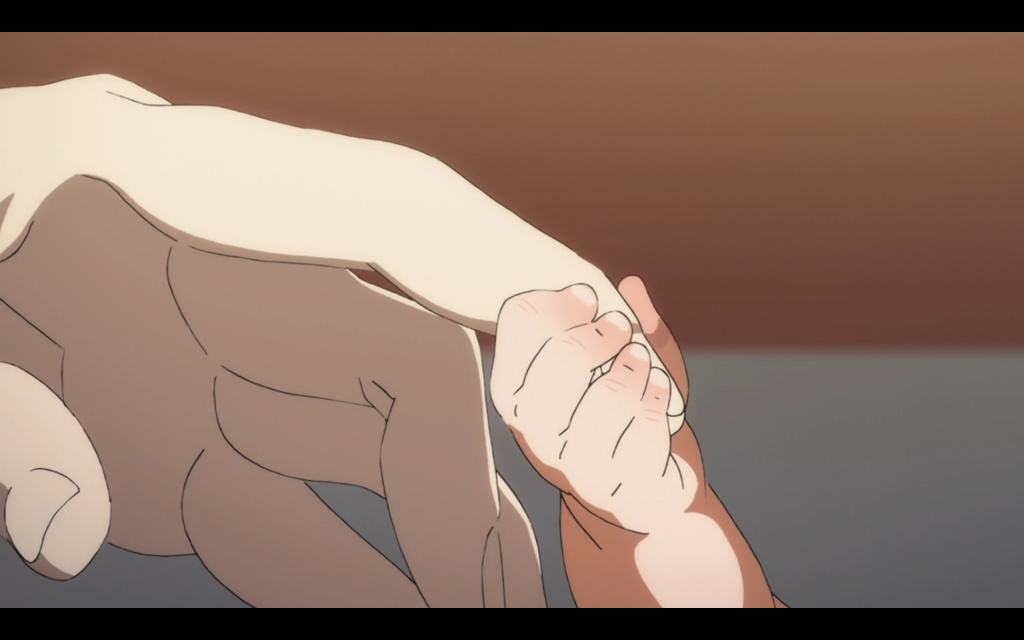 Of course, thanks to anime genetics, the baby looks exactly like Kokoro, even fresh out of the womb. I wonder what’s that like; when my girl was born, she didn’t look anything like me, and still doesn’t; she takes after my husband, full stop. Sometimes I think that the main reason I want to have another baby someday is because I might have one that looks like me. Selfish? Yes, but everything about having kids is this weird mix of extreme selfishness and selflessness.

I’m trying to imagine what it must be like to see a baby for the first time, as Mitsuru does, when you’ve never seen pictures of babies, or even knew about the concept of a baby until recently. Then again, even in real life, I think parents don’t really understand what a baby truly is until it’s born. It’s one thing to have an idea of this cute little thing, but when you first see it, those impossibly tiny hands and fingers, you realize that you never had a clue what you were in for. So I guess Mitsuru’s experience is pretty universal, really. 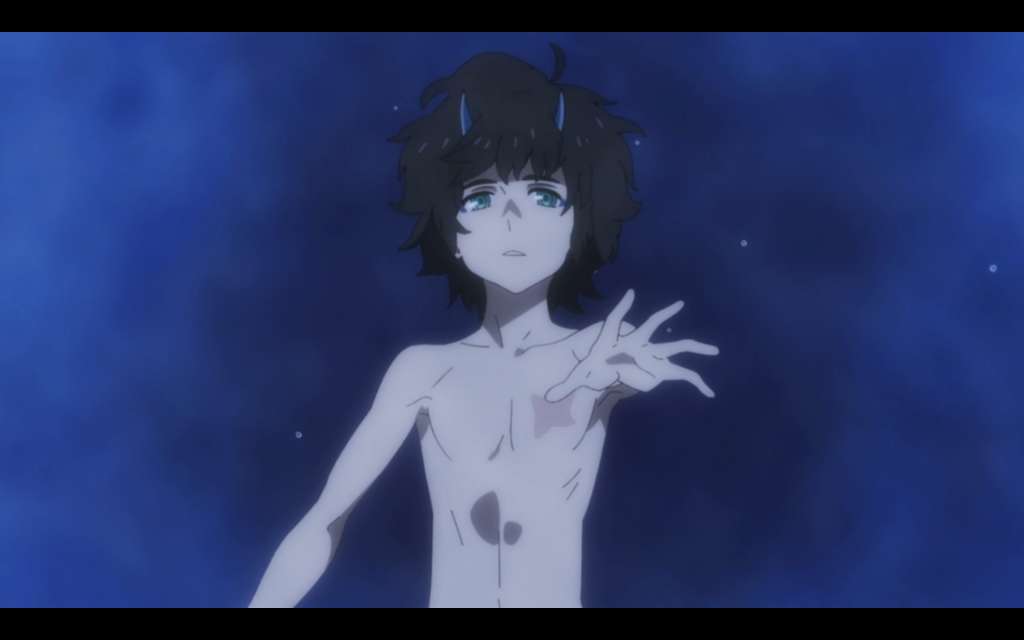 Hiro and Zero Two are all set two destroy the VIRM home planet, but VIRM has a trick; using Hiro’s humanity (since he’s still at least partially human), they manage to lull him into unconsciousness and screw up the bond between him and Zero Two. The solution to this problem comes very close to being a Care Bears Solution: everyone links hands and thinks about how much they love Hiro and Zero Two, aided by the statue of Zero Two’s body that now serves as a conduit between worlds. What stops it from being a Care Bears Solution, to me anyway, is that it’s Ai, Kokoro and Mitsuru’s daughter, that jars Hiro back to reality. Ai, and the entire process that transpired to create her, is basically the antithesis to VIRM’s entire program; it makes sense to me that she– perhaps the very idea of her– would be the trigger that would kick VIRM out of Hiro’s head.

So Hiro and Zero Two transform one last time, their final offspring, and destroy the VIRM home planet. Of course VIRM isn’t destroyed forever, because bad ideas can’t be destroyed forever, but they’re set back for long enough that our crew on Earth has time to get a foothold, which is all we need.

Back on Earth, everyone’s going crazy having babies, and I think it’s important to stop and look at this for a moment. It would be really easy to misinterpret the message of this show as “have lots of babies, that fixes everything!” but that’s clearly not exactly what’s going on. It’s critically important that Ikuno plays a crucial role in helping humanity get back on it’s feet. She doesn’t have a child, probably couldn’t if she wanted to at this point, and it doesn’t matter; there would be no future without her. Similarly, Zorome and Miku haven’t had kids a decade after the main conflict ends, and for all we know, they never will; it doesn’t matter one way or the other, because they’re contributing to the future too, teaching the children.

I can understand, given all the positive imagery of children and babies in this episode, how it might seem like a kind of pro-childbirth propaganda (especially in light of Japan’s declining birthrate.) But I really don’t think the point is that everyone should have children; not everyone in Squad 13 does. What everyone does do, is pitches in to help make the world a better place for their friends. Kokoro does it through motherhood, Ikuno does it through science, Miku does it through teaching, and Futoshi does it through cooking. Goro does it through exploring, letting the human thirst for knowledge overpower his fear. 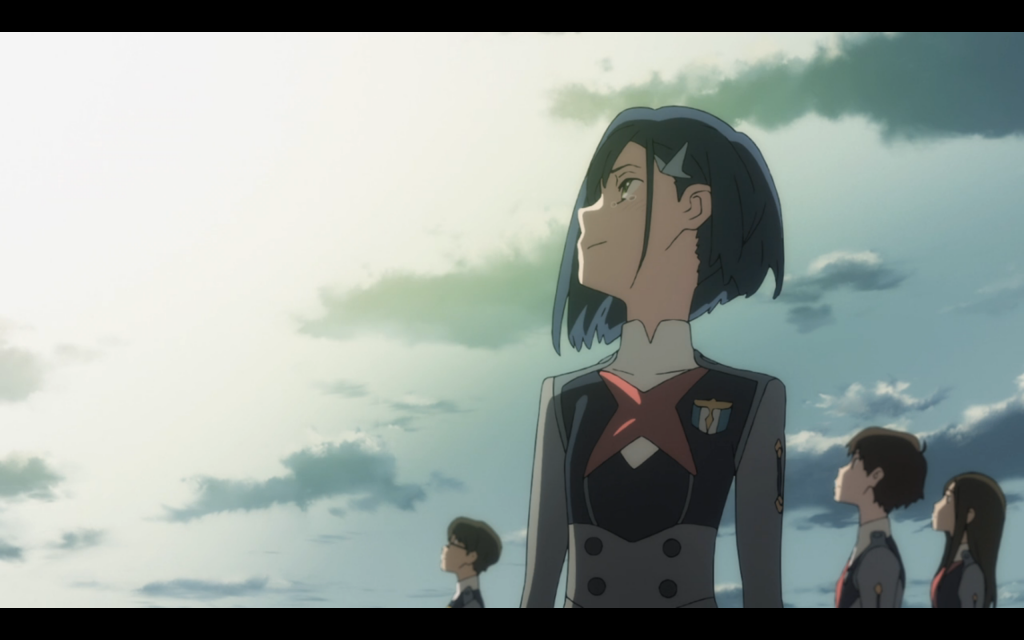 I just don’t think the creators are saying “Hey, all you people out there who aren’t making babies? You should get on that! Babies rock!” What they are doing (and here I go putting words in other peoples mouths), at least from my vantage point, is asking a question: what are you doing to touch the future? Are you contributing to making a better world for everyone, like the Squad 13 kids are? Or are you just kind of doing whatever makes you happy at the moment? Are you like one of the “Adults” from episode 10, plugged into the pleasure machine, happy to stay there until the battery runs out?

And that again is an oversimplification, because it’s not everyone’s responsibility to save the world. For some people, just taking care of themselves, getting through the day in one piece, is enough of a challenge, and that should be respected. But if we want the world to get better, at least some people have to be committed to making the world a better place; it’s not going to happen on it’s own. 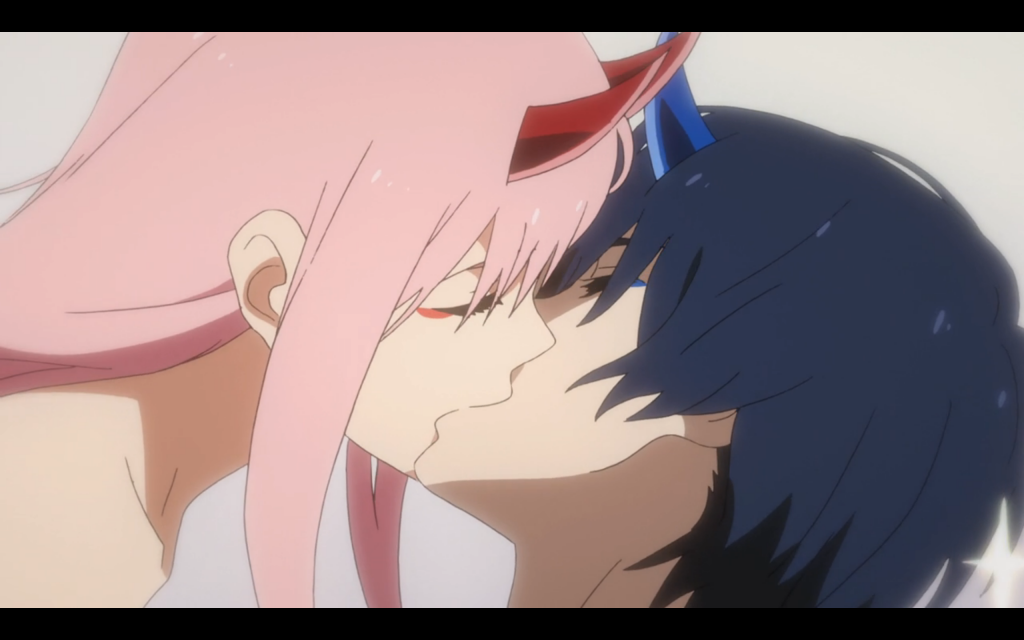 I think you could also interpret this show as being a counterpoint to the kind of transhumanism depicted in cyberpunk works like Ghost in the Shell; illustrating that it’s our primal biological functions, like eating and making babies, that define us as human. But that’s not quite right either; at the end, Zero Two and Hiro have both gone through tremendous physical changes (and ZT was never really human in the first place), but Ichigo believes that they were “more human than anybody else.” In Darling in the Franxx, the definition of human doesn’t revolve around whether or not you can reproduce, or if you have pale skin instead of red or blue.

As an aside, I said last time that maybe Ikuno would hook up with Naomi, and that does seem to be what happens. There’s no evidence that they’re lovers, but they’re clearly close. Ikuno gets perhaps the saddest ending of all the kids, but at least she’s not alone. 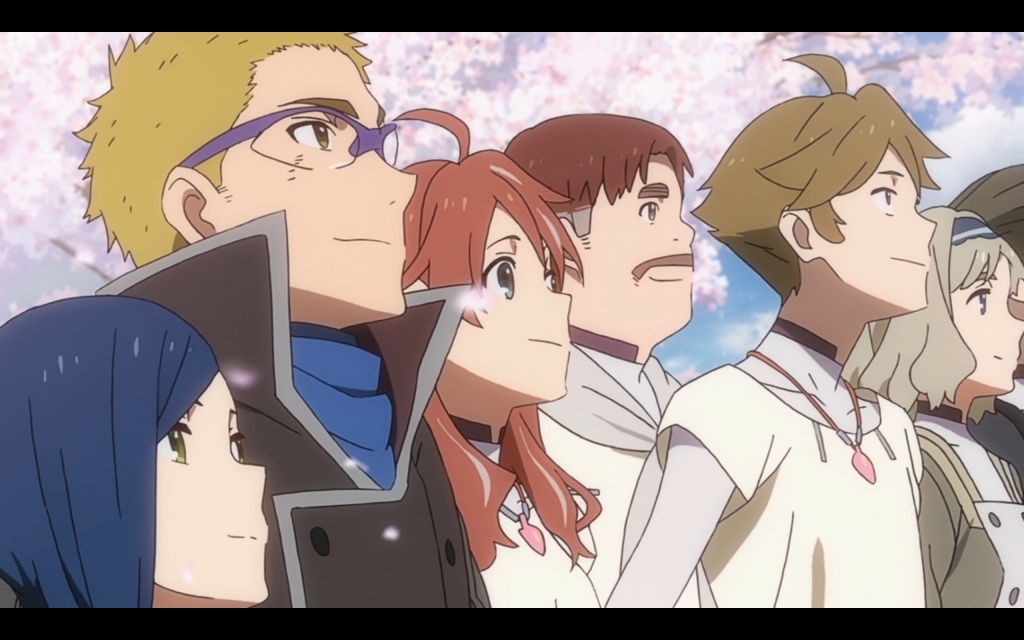 It’s also worth noting that the kids (well, they’re not kids anymore, but whatever) give up using Magma energy, and seem to commit to renewable energy. I think that’s a pretty transparent message about how humanity should abandon fossil fuels and find other ways of generating power. A lot of the stuff in this episode isn’t exactly the way it appears, but hey, sometimes a cigar is just a cigar. Sometimes showing fictional characters giving up on using the remains of dinosaurs to light their houses is a way of saying “You know, you should really considering giving up using the remains of dinosaurs as a way to light your house.”

Anyway, I don’t know if I’m ever going to have another baby. It cost us 6K to have the first one, and that’s with insurance: I think, for some reason, one night in the newborn ICU wasn’t covered, so we were stuck paying that off for a while. It’s become prohibitively expensive to have children, and from what I understand, it’s worse in Japan than it is here in the U.S. (though that isn’t the only reason for the declining birthrate). So even if the creators of Darling really do want everybody to go out and have a bunch of babies, it’s not going to work unless they start writing some checks. (Maybe that’s what the new Trigger Patreon is for?)

Whether or not I have another child is dependent on a lot of factors, only some of which are financial, and I guess that’s not really the point. What’s important is, am I living a life worthy of Zero Two– or, more importantly, of Ikuno? That’s what this show is leaving me with, and for that, I’m thankful. It was hardly a perfect show, and it would have likely benefited greatly from having a few more episodes to play around with. But I think it’s heart was in the right place; maybe a tiny fetal heartbeat, not quite strong yet, but clearly there.