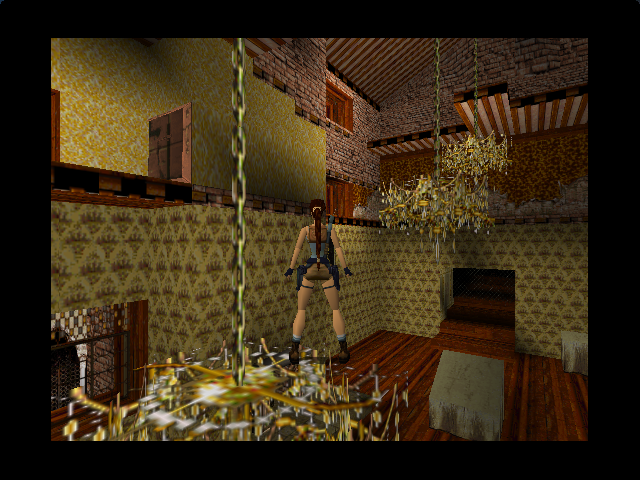 A Note on Format

Oh TR fans, you have no idea what I’ve been through to bring you this post. What follows is a sordid tale of technical woe; if you don’t care about that and just want to read about the level (which is understandable), please skip to the next section.

As much as I appreciate being allowed to use Katie’s excellent screen shots, I decided it was time to buckle down and take my own. Sadly, the Playstation Vita doesn’t allow you to take screenshots of non-Vita games (why?), so I had to change systems. I bought Tomb Raider II for the PC, thinking this would make life easier; oh, how wrong I was.

First, I needed to set up a controller. I’ve never been a PC gamer, and the chances of my actually completing TRII with keyboard controls were about nil. Fortunately, we already had a Steam controller, except I couldn’t get the buttons to map right. If you’re using the Steam Overlay (which gives you access to general Steam features no matter what game you’re playing, and is on by default), the action button is reserved for Steam functions, so I couldn’t use it to have Lara grab and fire her weapons. Obviously, I was not going to fight about 20 years worth of muscle memory with a different button configuration, so I had to turn off Steam Overlay, then I was able to map the buttons to the classic Playstation configuration. Except, without the Steam Overlay, I lost the ability to take screenshots within Steam; more on this later.

I was doing okay with the Steam controller, until the lack of a dpad became a problem. Lara just kept getting stuck in corners, and the analog stick liked making her turn in circles instead of setting up for a running jump. So I had to get a separate USB controller, with a dpad…which would have been great, except the game didn’t know that the dpad was there. Eventually my husband resorted to what I can only assume was evil sorcery to get the game to realize that the dpad exists in this reality, and play resumed as normal. Except pressing “s” to take a screenshot, a feature of TRII, wasn’t working for some reason (no idea why), so I had to resume my general method of taking screenshots on this machine.

This wouldn’t be a big deal, except I happen to be running Windows via Bootcamp on a Macbook, so my screenshot command is the somewhat arduous shift+alt+F11. Three buttons, which makes it impossible to take a screenshot with one hand on the controller. This means that when I want to take a screenshot while holding the look button (or any other button), I have to keep one hand on the controller, one hand pushing shift+alt, and use my big toe to push F11. Most of the screenshots in this post were taken in this manner.

If you put aside the fact that I still need to do a gymnastics move worthy of Lara herself to take a screenshot, I have a workable system now, but uh…is it just me, or was this all a helluva lot harder than it should have been? It feels like I’ve taken all the frustration and tedium inherent in the early games of this series and tripled it, all in a uniquely personal way. For a moment during this whole process, I believe I began to hate Steam, Tomb Raider, and even Lara herself, but that’s all passed now. I think. Probably. Mostly I just hate the Steam controller. But hey, I can take screenshots now, as long as I don’t pull a muscle in my thigh!

Thank you to those of you who have joined me for this sad tale of trying to play old video games in 2018; we now return to your regularly scheduled level write-up. 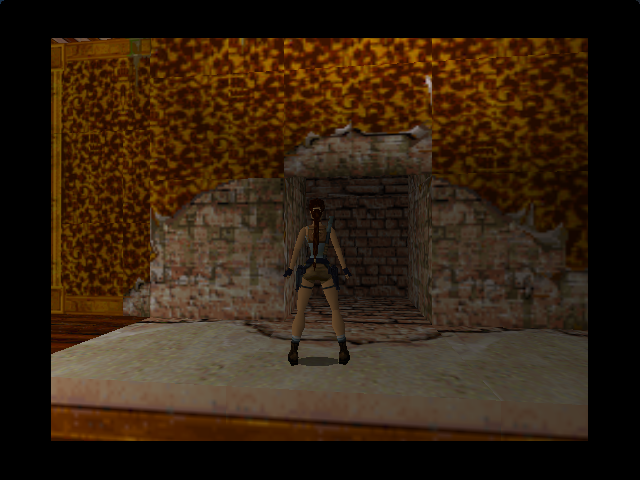 Ironically, considering everything I went through to take screenshots, there wasn’t much in this level that I wanted to take a picture of. Venice is a much prettier level, and a more iconic one t’boot, but I find this one more fun to play. We’re inside Marco Bartoli’s personal stronghold, so the “where are all the civilians?” concern no longer applies; besides, we see more than enough muscular henchman for the area to feel populated. The only really strong, memorable idea in the level is the chandelier-hopping sequence, but somehow, even when you’re solving typical, bread-and-butter Tomb Raider puzzles, there’s something appealing about this level to me. 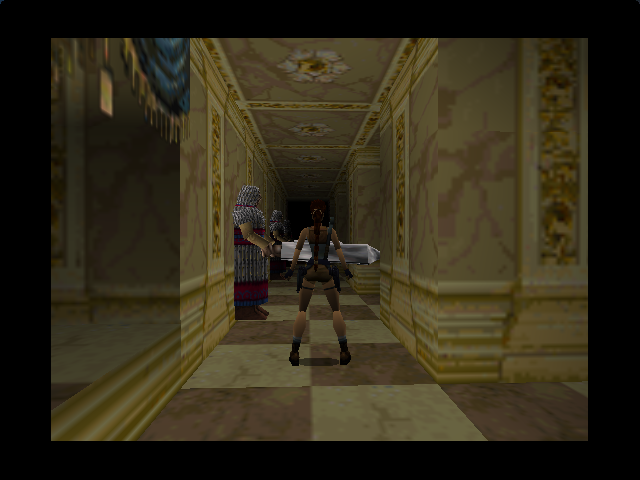 Despite my enjoyment of this level, I think this might here might be the dumbest looking trap in all of  the Tomb Raider games. These sword-swinging robots just look totally out of place in Bartoli’s mansion. Makes me feel extra-stupid when I time it wrong and get Lara cut in half by one of them.

Maybe it’s because the difficulty balance finally feels right– we may still be fighting a ton of gun-toting baddies, but it’s a lot easier to take them on in this terrain than in the watery canals of Venice. I think TRII starts out a bit too hard, and this level is where the difficulty eases up a bit and allows you to get your bearings. The level also strikes a good balance of giving you decent-sized areas to explore at your own pace, while still having linear parts to move things along briskly. 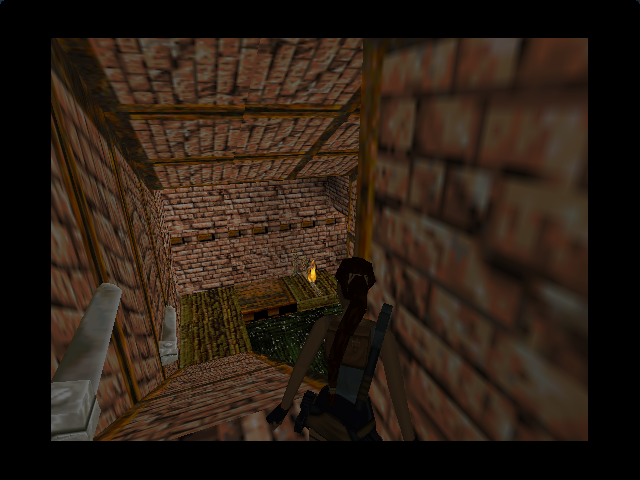 When I first played this game as a teen I didn’t realize that you could totally bypass these blade traps by jumping into the water; now it seems very obvious. I hate this burner trap though, it’s like a redux of the Palace Midas burner trap only with no grandeur.

There’s also something kind of fun about knowing that you’re in Bartoli’s house, jumping on his furniture and taking his stuff. It’s like the guy posted a “No girls Allowed in Treehouse!” sign on his front door, and Lara just ripped it off and went through without a care in the world. 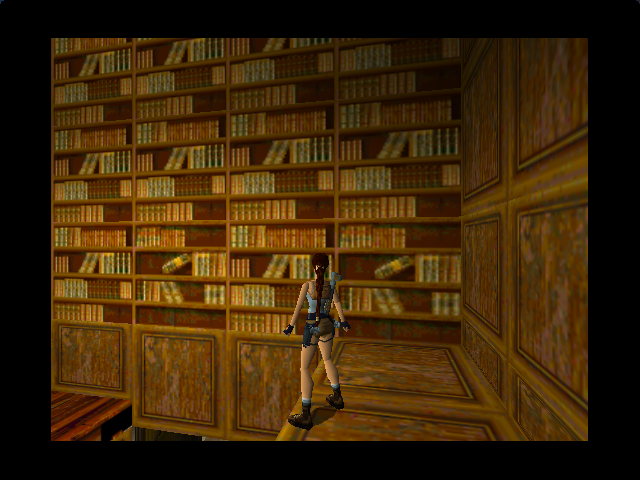 This game has a pretty sparse script, so we don’t get to learn a whole lot about Bartoli; we probably learn more about him from exploring his home in this one level than anywhere else in the game. I know he’s a crazy, power-hungry cultist dude who just wants to become a dragon, but I’m beginning to think the guy might have hidden depths; no one who has such an awesome library can possibly be all bad.

The whole sequence of climbing up library shelves, shooting out windows, frolicking in the garden and canal outside, then going back into the library to solve more puzzles is an example of the kind of thing that this game does really well; putting several different types of surroundings adjacent to each other, and letting you jump around between them before any of them have a chance to wear out their welcome. All of the TR games do that to an extent, but when TRII is firing on all cylinders, it’s really good at making you leave and reenter the same space about 40 times without even minding that you’re doing it. 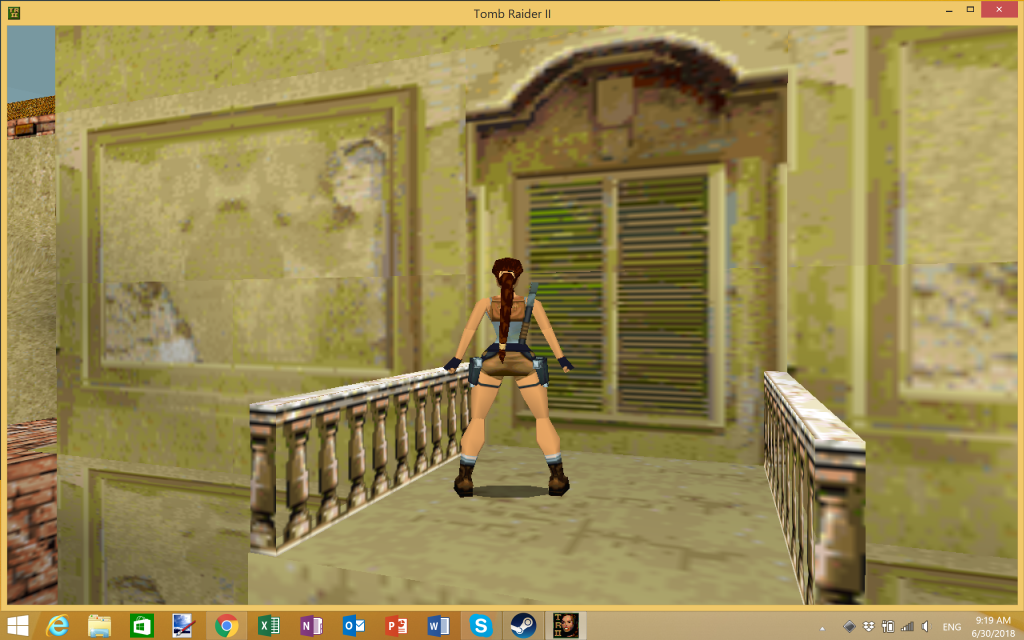 At one point I screwed up the resolution and went to widescreen, making Lara look like she just gained 50 pounds. Lara dear, I know those Italian pastries are delicious, but please put down the cannoli! We have work to do.

There’s one thing I want to call attention to here, something that I’ve never understood: the uzis hidden in a pool of water towards the end of the level. Why is this not a secret? Like, you should pick up a dragon, hear a little “ding!” sound and then get the uzis, but no, they’re just there, lying on the ground, as if this is a totally normal pickup. Then when you get the actual Jade Dragon, all you get is shotgun shells or whatever. It’s like the uzis are openly mocking the entire concept of secrets, and I’m not sure how to feel about this. Respect the sanctity of the secret, developers.

One more thing: you know that last enemy, the guy who shoots you from the balcony right after you blow up part of Bartoli’s house? I think he owes us a pickup, at least some automatic pistol ammo or something, and it’s morally wrong that he doesn’t give you anything. Seriously, I shimmied all the way over to that dumb balcony for nothing? Lame. 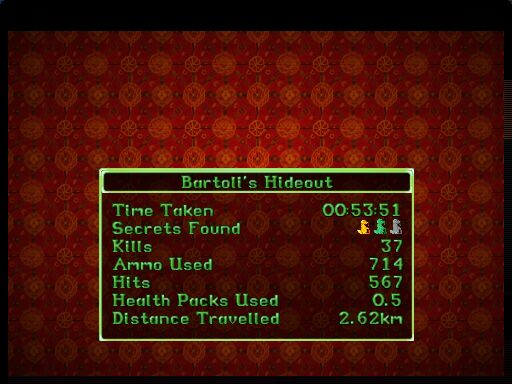 I feel bad that I wasted a small medi-pack, but there are just too many of those gun-toting guys in the library and I haven’t memorized all the secret ways you can ambush them without taking damage yet. Hopefully I can get through Opera House without using every single medipack I have.

Best: The entire ballroom area, jumping from chandeliers and all. Obviously I’m keen on the library too, but the library is infested with an annoying amount of enemies; the ballroom has just enough opposition to keep you on your toes, but you can primarily focus on solving the puzzle. See, if they made the game nowadays they would probably make the chandeliers swing and stuff in accordance with the laws of physics, but I actually like it better this way.

Worst: That stupid burner trap. I know it’s actually quite easy if you know how you’re supposed to do it, but it plays on the seasoned TR-player’s desire to turn everything into a running jump, and that’s just not cool. Plus it’s just kind of plopped randomly in the middle of the level and doesn’t have a good reason for being there, as opposed to the similar fire trap in Palace Midas. 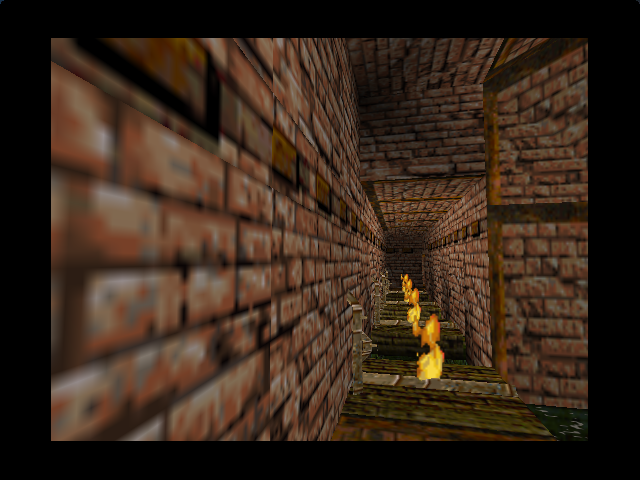 This is why no one comes to nice parties at your house, Marco. Because you have a fire hazard right in front of your ballroom.

A fun level to play, but it lacks the big ideas and beautiful views of the best Tomb Raider levels, landing it somewhere in the middle.

Up Next: Opera House

So named because completing this level always takes me longer than an entire opera, complete with Valkyries.