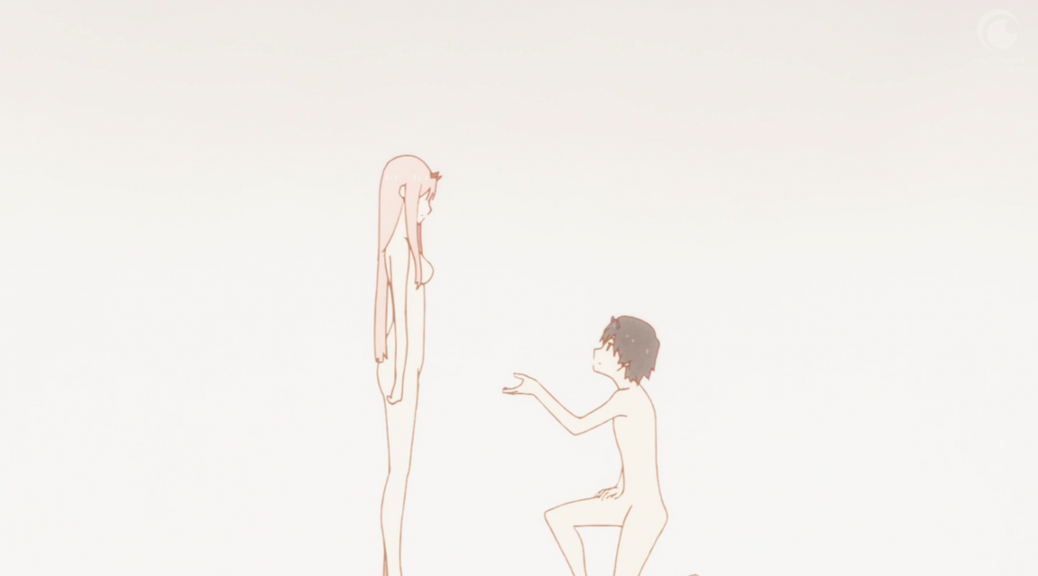 This is the first time I’m sitting down to write about this show without feeling good about it. I didn’t hate this episode, but it didn’t quite come together for me, and that leaves me with a weird feeling, because this show has been pretty thoroughly in my wheelhouse so far.

I agree with where the show is going on general terms: Zero Two and Hiro heading into another dimension to put the hurt on VIRM where they live, Kokoro and Mitsuru coming together over the upcoming birth of their child, Nana and Hatchi developing stronger parental feelings toward their charges, etc. But everything in this episode just seemed a little bit too quick, neat and convenient for me. It seemed like getting into space was entirely too easy, the fight against VIRM was too easy, and everything happened just a bit too fast to resonate. I don’t want any of the Squad 13 kids to die, but it seemed convenient that one of the Nines was the only one to die in that conflict. 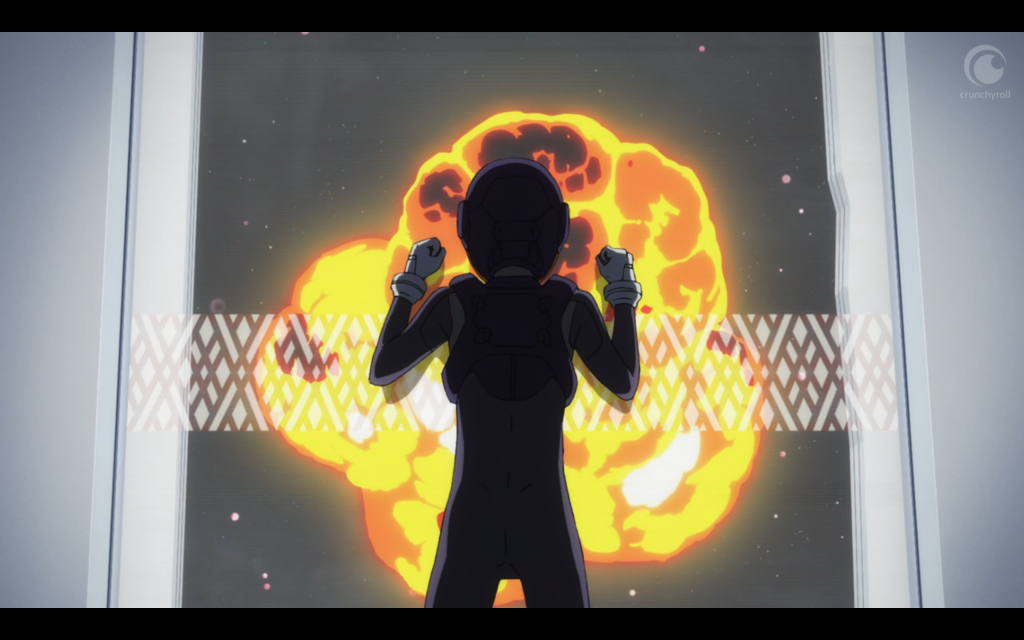 Some people have been complaining about the pacing of this show for a while now, but I haven’t been one of them. I liked the deliberate slow pacing of the slice-of-life pacing portion of the show (episodes 16-18), and how that contrasted with all hell breaking loose in episode 20. A ton of things happened at a breakneck pace in 20 and 21, but I still felt it worked somehow. This episode was the first time I felt like stuff was happening so fast that nothing had time to properly land. 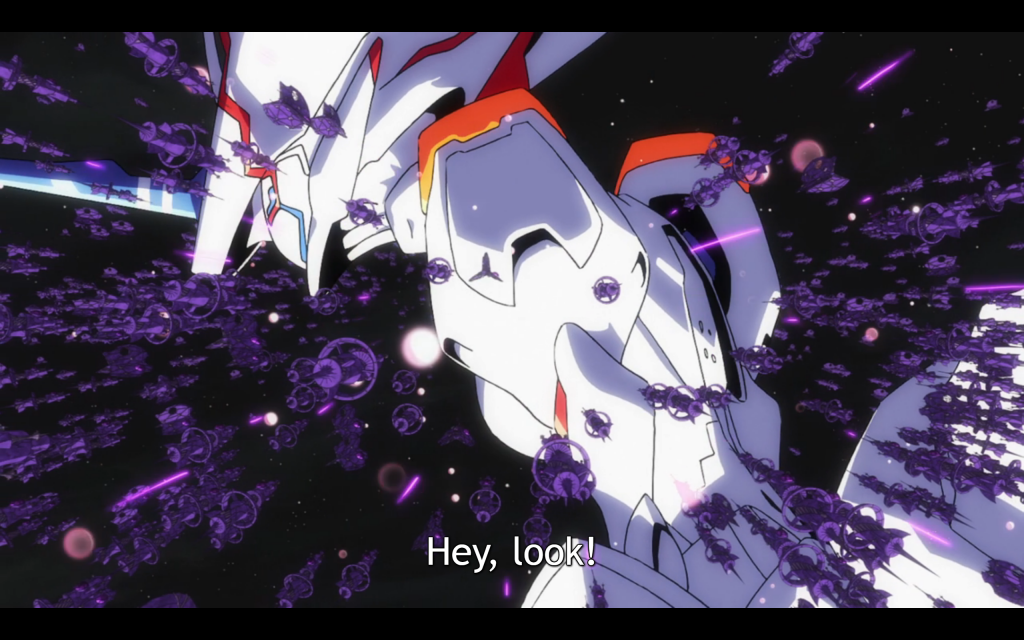 I also really disliked Nana and Hachi being in space with Squad 13, as much as I like them as characters otherwise. They really should have stayed on Earth, supervising the other parasites, rather than going off planet on a dangerous mission that could have easily gotten them both killed. Werner Franxx said that Nana and Hachi had to be the “new adults,” and considering what a warped view of adulthood those two have seen, I guess I can’t blame them for not really knowing what that means. Still, it seemed like the only reason Nana and Hachi were there was to deliver exposition, and the transparency of that took me out of the story.

I’m not sure how to feel about Zero Two and Hiro reuniting once again. I understand why Zero Two pulled away from him after merging with Strelizia, because she realized that he wouldn’t have anything resembling a human life if he stayed with her. And showing that selfishness is important; the fact that Zero Two is putting what she wants for Hiro ahead of Hiro’s own wishes mirrors Hiro’s selfishness in putting his reunion with Zero Two ahead of everything else in the previous episodes. This show is doing a good job of showing that love isn’t all sunshine and roses. But the reunion happens so quickly after the parting, from the viewer’s perspective that it deprives their reunion of the gravity it really should have. 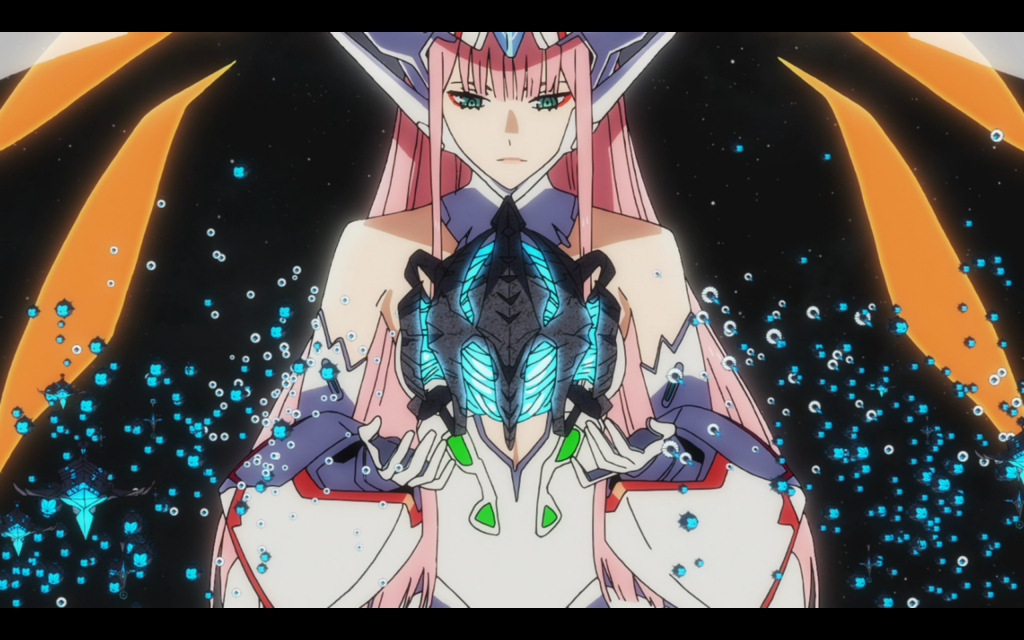 This episode is markedly better if you turn off the sound and play Billy Idol’s White Wedding for the last few minutes. Go on, try it.

I do like Giant Zero Two Strelizia and her wedding-dress mech, with her bridal bouquet of explosives. That’s the sort of thing that this show does well, taking really broad metaphors and creating powerful imagery with them. But everything around it undermines the power of that moment.

That said, I’m still looking forward to the final episode; I think there’s a possibility episode 24 could redeem everything I didn’t like about this one. I also wonder if these problems could have been easily solved if the show was slated for 26 episodes instead of 24; maybe just one or two more episodes of build up could have made a huge difference to the pacing. Still, we’re here now, and I’m curious what Hiro and Zero Two are going to discover Beyond the Infinite, or wherever they’re headed.