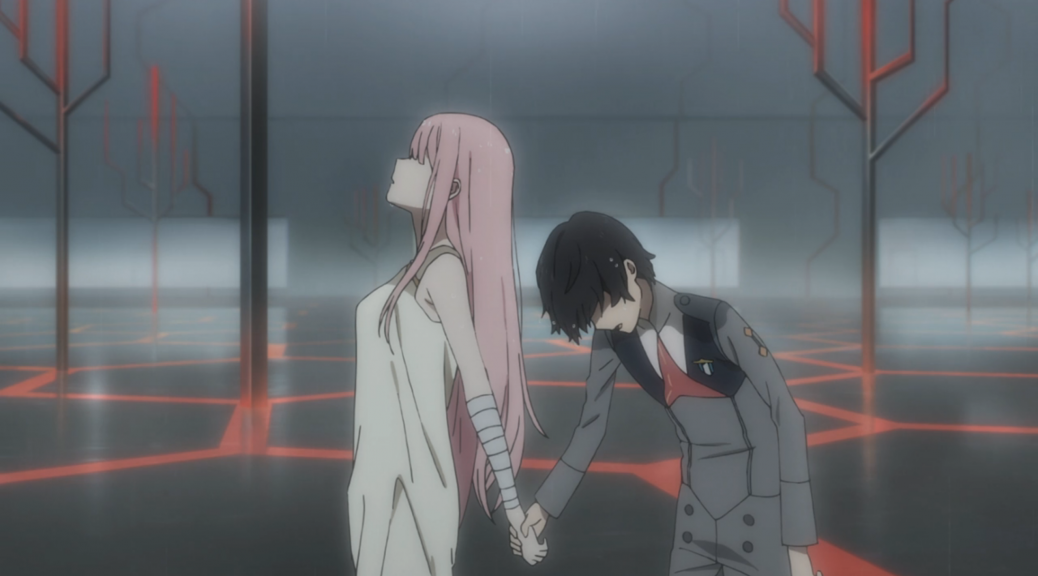 This is pretty unusual. “A bunch of intrepid kids save the world” stories are a dime a dozen, but this is the part of it that we don’t normally see; after the world is saved, then what? What exactly has been “saved,” and is any of it the stuff you wanted to save in the first place? This isn’t quite where I was expecting Darling to go, but now that it has, it feels inevitable; for me, I take that as a sign that the writers are doing something right.

I said last time that if Zero Two wasn’t dead, I was going to feel cheated, but actually, that’s not the case. What I really didn’t want was for her sacrifice to be minimized by having her just be sleepy for a couple of days after the battle or something; having her soul merged with Strelizia and going off into space, to fight a perpetual war, is arguably worse than death. I say “arguably” because Zero Two loves to fight, so it’s probably less of a living hell for her than it would be for anyone else, but still…hardly a happy ending for her. 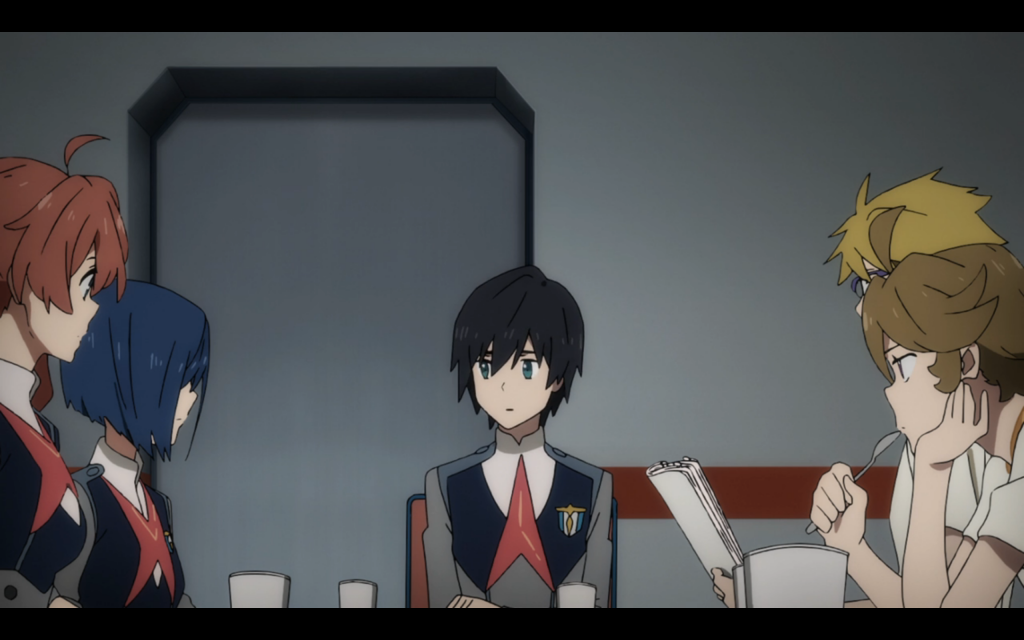 We will now call to order the first meeting of the Special Committee For The Continuation of All Life on Earth. First order of business: does anyone want to live on this Earth? It’s not great.

As far as I can tell, all the adults were absorbed by VIRM last episode, leaving the parasites the only humans left alive, along with former parasites like Hachi and the Nanas. It’s unclear how many parasites are even alive outside of Squad 13, which would be useful to know in reference to how the episode ends, but we’ll get there. Our kiddos are focusing on farming so they’ll be able to survive after their food runs out, except the parched soil they’re surrounded with isn’t proving fertile. Speaking of fertility, Kokoro is getting nauseated about every five minutes, and everyone finally finds out that she’s actually pregnant.

I think it makes sense that Kokoro is horrified when she finds out. Yes, she liked the idea of having a baby, but it was like a fairy story to her; a myth from a long time ago. It’s one thing to imagine having a cute little doll-like thing in your arms, and quite another to be told “Yes, there is another person living inside you now and they will get bigger and bigger until they burst out.” Nana (the useless one) mentions that it’s considered impossible to pilot a FRANXX while pregnant, so in the past pistils had abortions. This is interesting, because when Kokoro was first revealed to be pregnant I thought she was going to have trouble piloting, but she and Mitsuru did pilot together during the last operation, albeit with difficulty. I think we’re supposed to assume she got away with it because she was still early in the pregnancy, but normally pregnant women can’t; their conception energy is being used elsewhere. 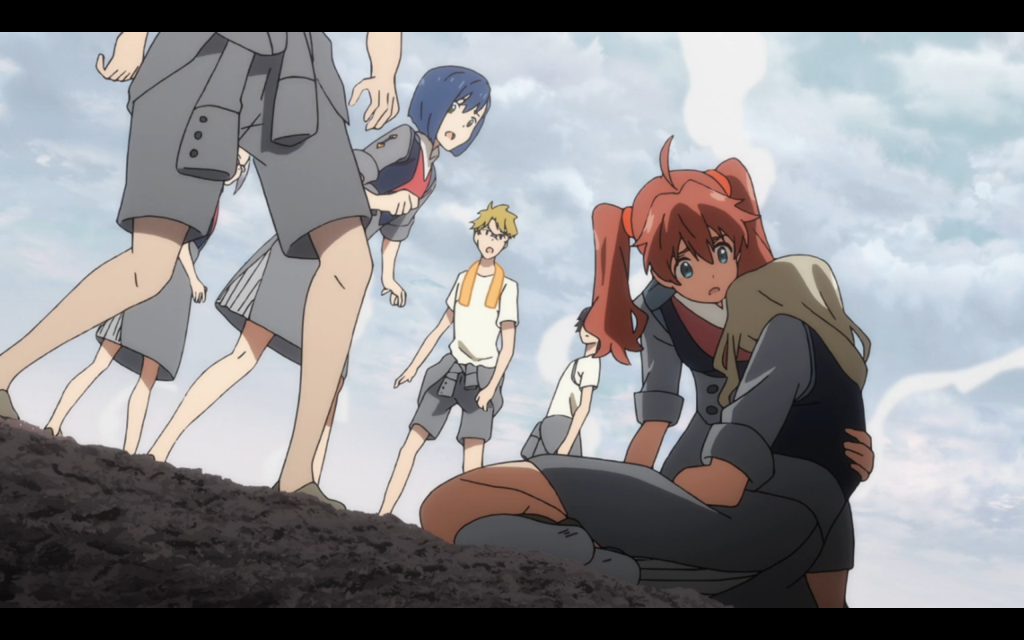 All Kokoro does this whole episode is vomit and lie in bed, which is pretty much all I did for the whole first trimester of my pregnancy, so I can relate. They better start allotting her more of the limited food supply, otherwise they’re going to have a VERY dangerous lady on their hands once she hits the 4-month mark. Do not get between a pregnant lady and her snacks.

Dr. Franxx has set up Hachi and Nana(the original, decent one) to be the next generation of caretakers for the kids, which makes me like him more posthumously. I know a lot of what happened on this show was ultimately Franxx’s fault, but at least he knew that and tried to make amends at the end of his life, which is more than you can say for a lot of fictional mad scientists. Anyway, Hachi and Nana discover that the kids who were kicked out of Garden (like Hiro’s original partner, Naomi) are being kept in what appears to be cryostasis; frankly, I thought Papa had killed them all outright the moment they failed as parasites, so this is a pleasant surprise. I assume they can be revived and rejoin the human population, otherwise I don’t see the point of introducing them this late in the game.

Hiro figures out that the catatonic Zero Two he’s left with is just her body, and her mind is in Strelizia, and embarks on a desperate plan to reunite with her. Goro rightfully chews him out for how selfish this is, but it does nothing to change Hiro’s resolve. I think it’s important to show this, the dark side of love. Last episode, Zero Two saved the world because of love, but she didn’t do it for that reason; she did it to get to Hiro, and saving the world was just the icing on the cake, if that. Now Hiro is just as determined to get to her, and the fact that he might doom the world by doing so is just a minor detail to him at this point. Both of them are acting the exact same way, yet Zero Two seems like a martyr while Hiro seems like a selfish jerk.

When the whole squad (save Mitsuru and Kokoro) agrees to go into space with Hiro to reunite with 02, I’m left with mixed feelings. If it’s selfish for Hiro to go, isn’t it even worse for the rest of them to do so, since they’re effectively the leaders of the planet right now? This is why I wish we knew how many other parasite kids were still around; if there’s hundreds of healthy parasites around to do work on the farm and such, under Hachi and Good Nana’s competent direction, what Squad 13 is doing makes a lot more sense. I guess we kind of have to assume that’s the case, otherwise our kiddos have just doomed the human race to extinction. 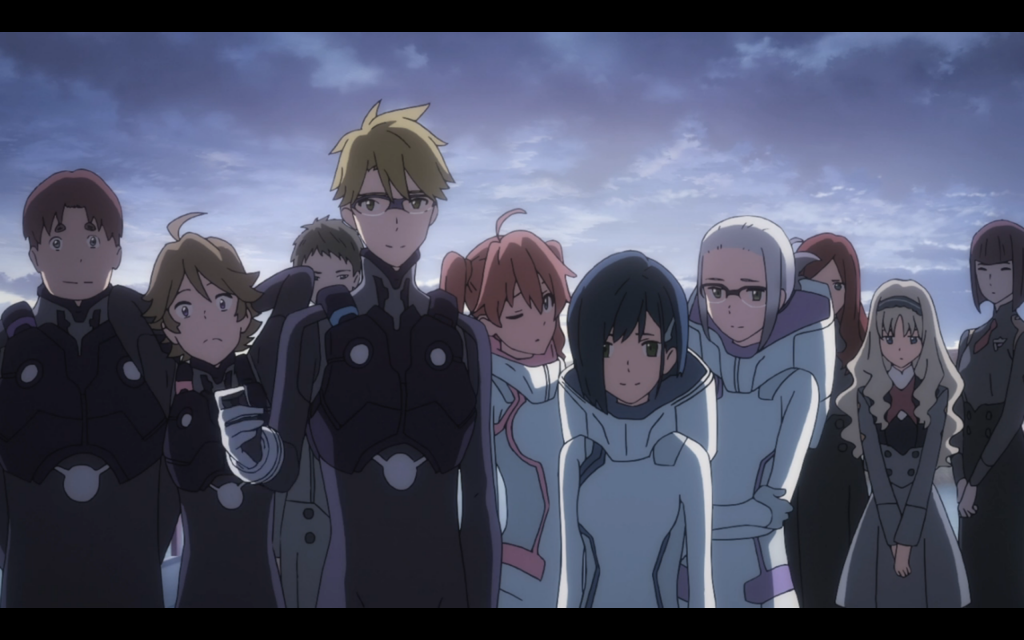 It looks like our final two episodes are going to be in space, and uh…I’m apprehensive about this. Because once Mitsuru and Kokoro were left at home, the rest of the cast effectively became disposable. Thematically, the future of the human race is tied up with Kokoro and her baby (and has been for the entire run of the show), so as long as she survives and gives birth, the good guys effectively “win.” Anything could happen to the crew in space, and I’m not even sure what I want to happen. They could all die defeating VIRM, keeping the Earth safe for Kokoro’s children; or we could get some 2001: A Space Odyssey type stuff with people passing onto a higher plane of existence or something. Or both. Or neither.

I don’t know; my desire for this show to go where no mecha show has gone before is warring with my desire for the kids to come home safe and sound and frolic in their new Garden of Eden (Eva?), and maybe even Ikuno will get to hook up with Naomi or something and everyone will be happy. It could happen.