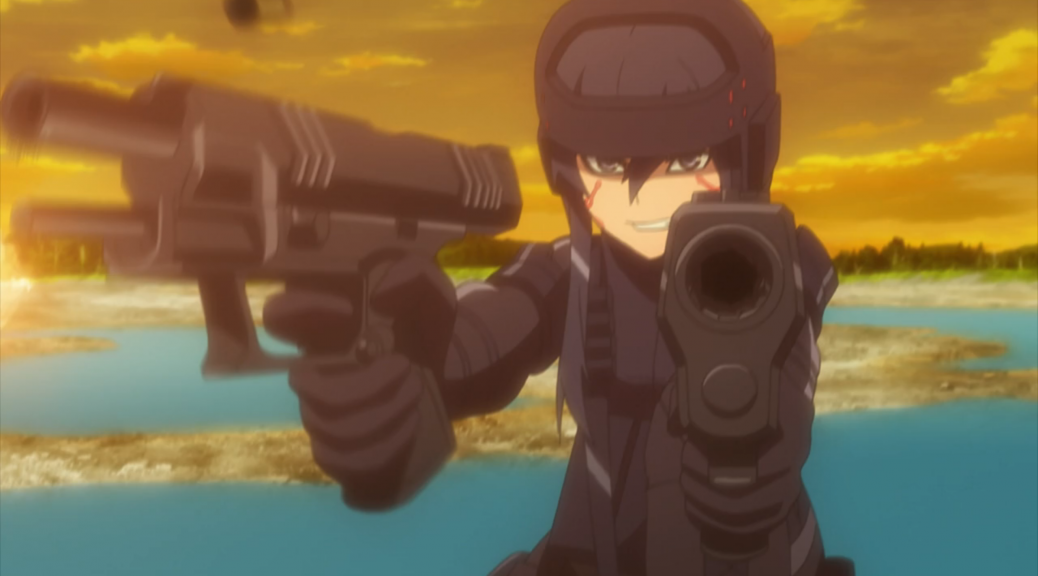 Oh my goodness, do I love Fuka. Everybody on this show is having huge philosophical problems negotiating the line between games and reality in a VR world, and Fuka has it all perfectly separated like she’s playing an NES on her grandparents’ couch, and that’s about how much she cares. It’s glorious.

She somehow manages to delay LLENN by tying LLENN’s shoelaces to one of her grenade launchers, and and uses a knot that would make an Eagle Scout proud. So poor LLENN has to spend seriously half the episode trying to untangle her goddamned shoelaces, meanwhile Fuka downright skips towards the enemy team like she’s playing hopscotch on the playground. Then she gets her hands and feet shot off, but no big, she walks it off in time to save LLENN in dynamic vehicular fashion, all while blatantly hitting on her with as much sass as possible.

Guys, I’m afraid. I think I may love Fuka as much as I love Rindou in Food Wars!, and if you’ve read my Food Wars! posts, you know that level of obsession probably isn’t healthy. I’m making a mental note to address that with my therapist, but the meantime, I guess we should discuss the rest of the episode.

So Pito plays with some of her opponents before she gruesomely kills them, leading one to ask her if she’s having fun doing this. Uh…well, yes, it’s a video game, sport. Of course Pito is having fun. I get the point being made– at what point do acts of clear sadism stop being acceptable in virtual reality on the basis that it’s “Just a game?” It’s an interesting question, but once again, I think people who are deeply into a game as violent as GGO have probably waited too long to ask this question.

One of the SHINC ladies who got eliminated makes a mean remark that most of the players left in SJ2 are women, and “real men” would play with more guts; it seems really bizarre and out of place (albeit intentionally) not just because this woman is a member of SHINC, but because of what a feminist anime this has been all along. In addition to the obvious point that most of the characters (and the best players) are women, this is a story of a man trying to save the woman he loves, only he’s powerless to do it, and the only person who can actually save her is her female friend; it’s an inversion of the “only this special man can save the woman” narrative.

Yes, I just called an anime feminist and think that it’s basically a good thing; hell has now frozen over. Hell is even available for ski vacations, so get your reservations in before all the good bungalows are taken.

Speaking of SHINC, they seem to have used up their ingenious plans allowance for this month last time, because they don’t have much a of as strategy for taking out Pito and M. Basically the remaining members of the team sacrifice themselves so that Boss-lady Eva can try to sneak up on M from another angle, but it’s a pretty transparent gambit and doesn’t work. So that’s one more team down. We’re now left with Team Death By Loli, Team Batshit Insane Starcrossed Lovers, and some other mystery team who’s waiting in the shadows until the smoke clears; they seem like smart people.

There’s an interesting moment when LLENN starts to break down, overwhelmed by the pressure. I think the problem is that “I have to brutally kill Pito so I can save her, because she’s my friend and I care about her!” is just too confusing to understand in the heat of battle. She decides she’s going to truncate her motivation to “I am going to kill the everloving fuck out of Pito,” and forget about the larger context. I like this; it’s psychologically realistic to me that LLENN would have this problem and need to simplify her thinking. 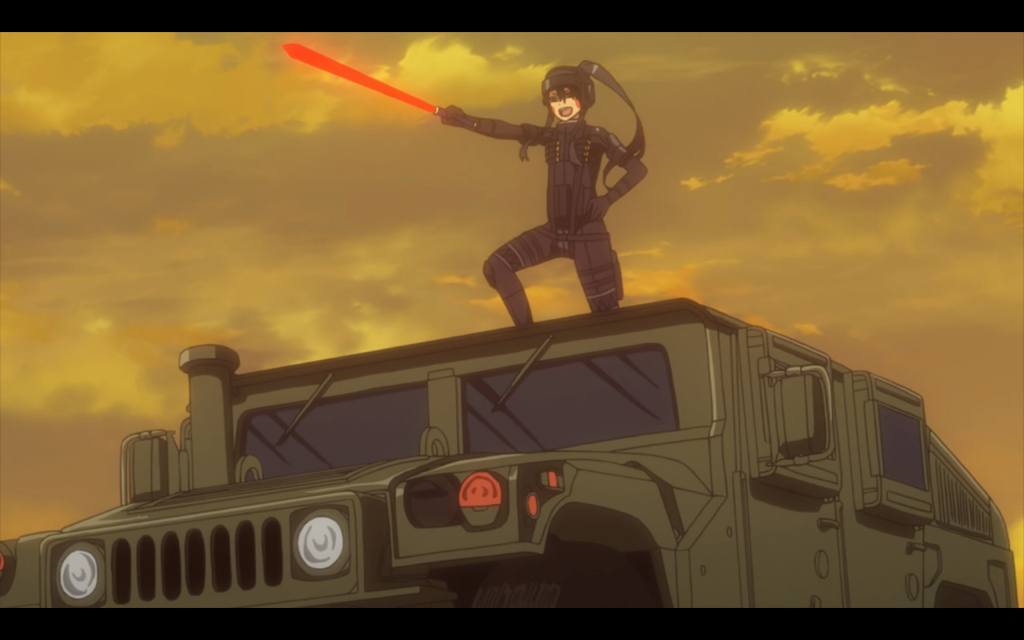 What follows is a pretty stellar extended action sequence including jeeps, cliffs, multiple kinds of guns, grenades, natural gas explosions, and crazy stunt driving. My hat is off to the animators at 3Hz Inc., because it’s pretty rare to get a multi-part action sequence this exciting and well-animated in a TV anime. I guess I am now eating my words from earlier in the season, when I kept insisting that GGO just didn’t look fun, but hey; I like being wrong when the result is awesome anime. 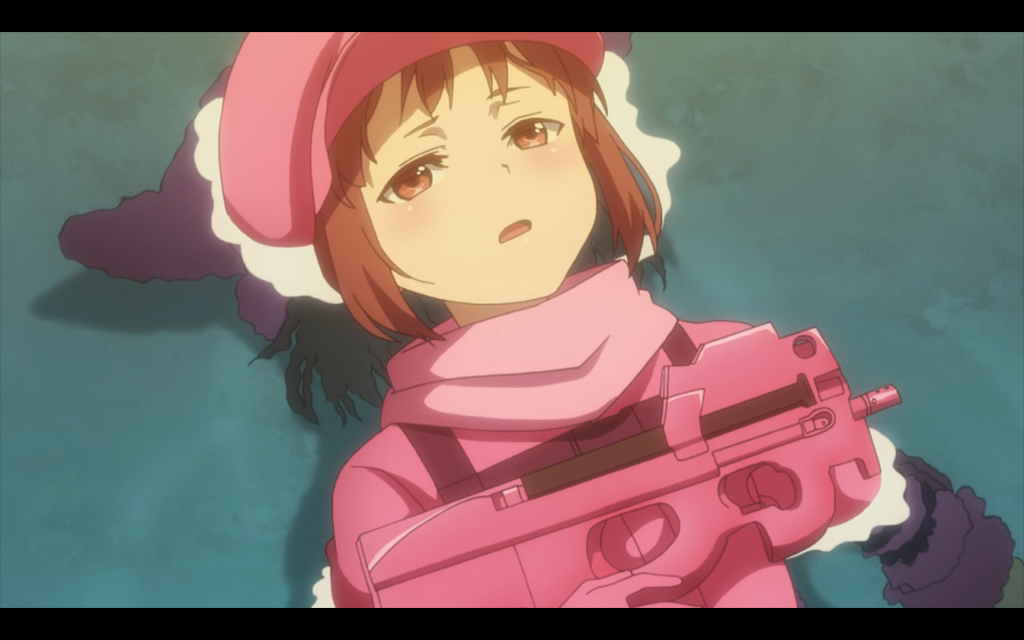 “As I lay dying, I have no regrets…except for choosing Barbie Doll Pink as my color for camouflage. Not one of my better ideas.”

I said last time that I would be very excited if LLENN jumped, landed on Pito’s photon sword and then flipped off, and that did not happen; actually, now that I think about that, I think there are some mechanical problems with that. What we do get to see is LLENN stepping Pito’s face and then backflipping off, so I’m still pretty excited; not quite to the level of dancing in my chair, but it’s getting close. 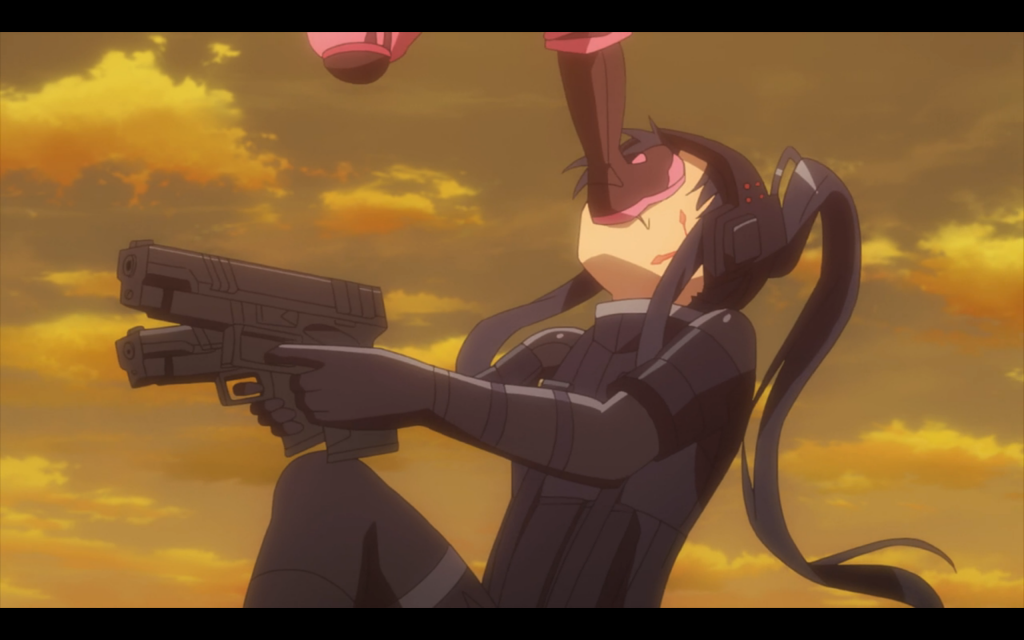 Hello, my name is Karen and I approve of this face-stomping.

LLENN sacrifices the second version of P-chan to get to Pito, so we’re now left with the two ladies with no guns. They’re going to have to settle this with melee weapons, in properly brutal fashion. Meanwhile, I assume Fuka is going to take on M; I don’t expect her to beat him, but I expect her to lose in such a way as to make him wish he were dead, because that woman has a gift.

Well, one episode left, right? I think it would be really funny if the one other team that’s off in the mountains somewhere just sat on their thumbs and did nothing, only to win after the remaining foursome all take each other out in incredibly graphic fashion. In fact, I would bet money on that happening; any takers?