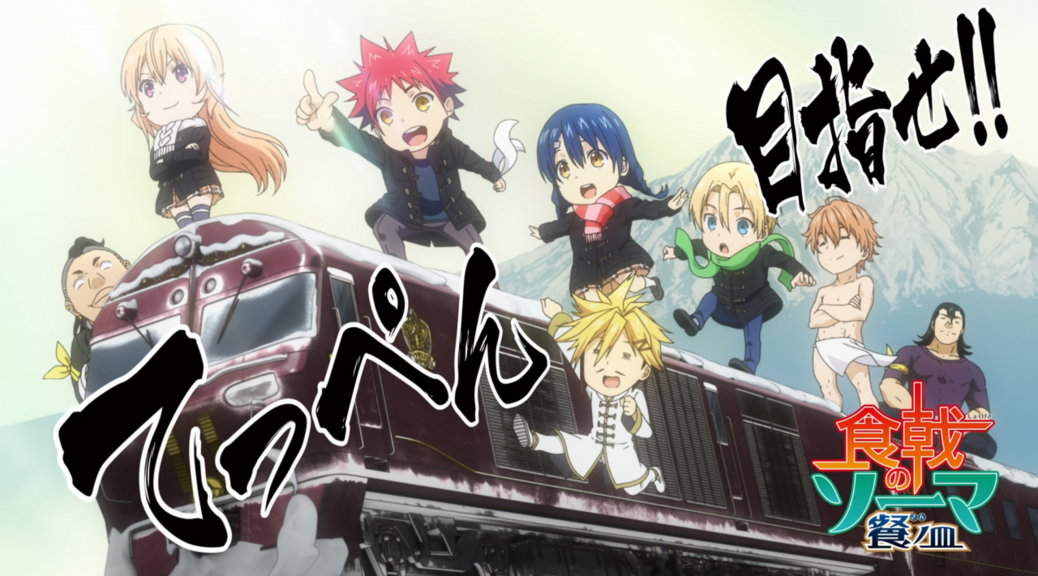 I was wondering how they could possibly wrap up this arc with one episode remaining, and it turns out that the show had no intention of doing that. We’re ending the season practically at the North Pole, in the middle of the Team Shokugeki, with everyone’s enrollment status in flux. I expected to be pissed off by this, but actually, I think it works for Food Wars! in a way it doesn’t for other shows. Even when the characters are left stranded on the edge of a cliff, we know the bottom of the cliff is filled with bouncy pastries and panna cotta, so no one’s ever really in that much danger. 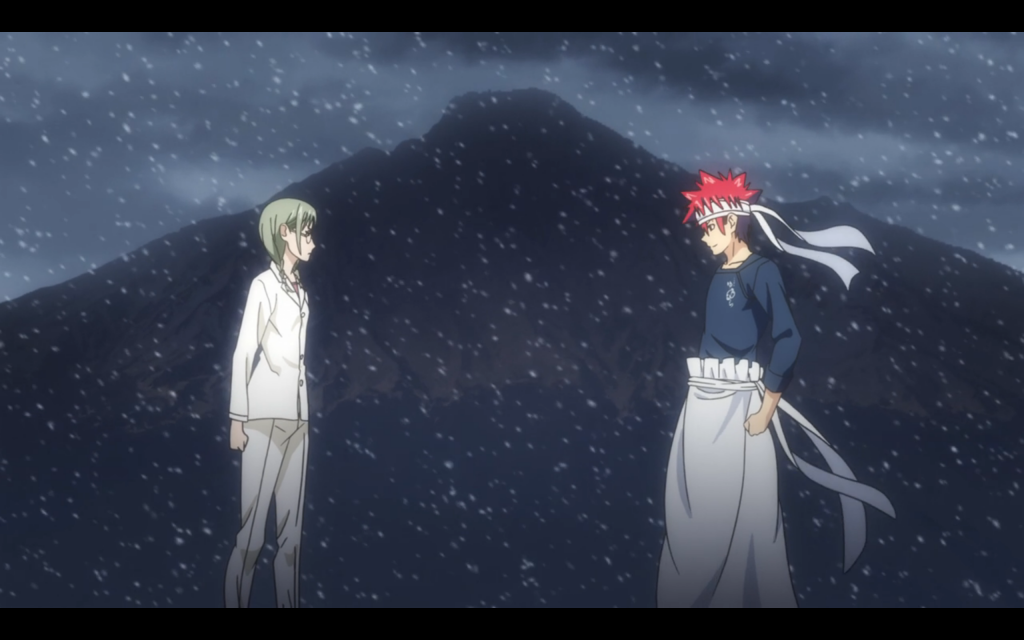 If they were cooking outside like this, Soma would definitely win, since Nene looks like she weighs about 80 lbs. She’d freeze to death in two minutes, and Soma would be the Last Chef Standing. Metaphorically, that is kind of what happens though…..

In the months (years?) that this show is going to be off the air, it’s not like I’m going to be haunted by thoughts of “but who’s going to win that Team Shokugeki?”, so let’s not pretend it’s a bigger deal than it is. I would have liked a more conclusive ending, but I’m not losing any sleep over it. 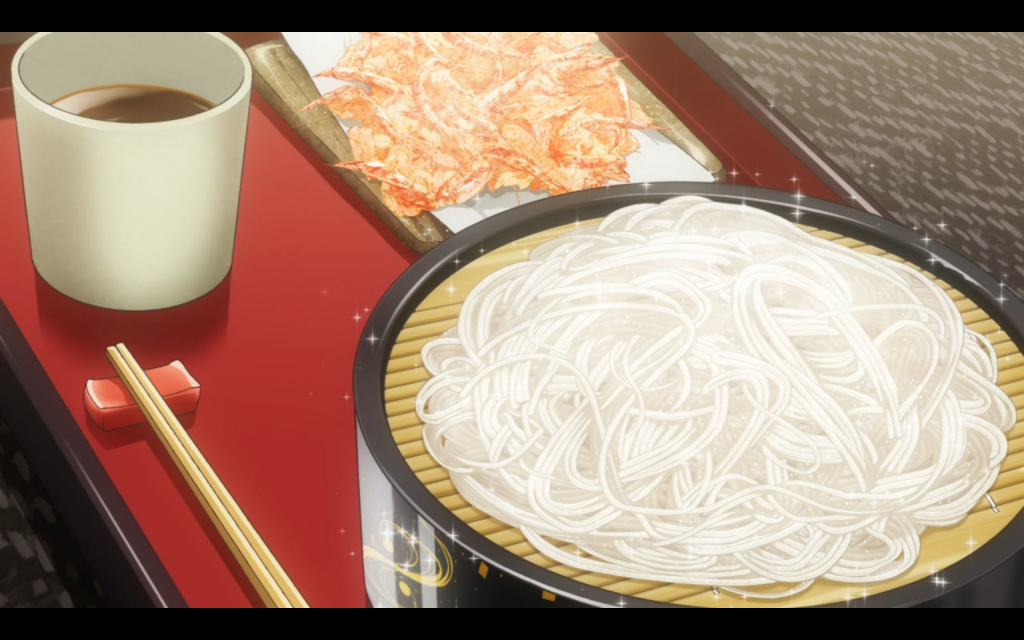 Anyway, Battle Soba concludes, and I have to call shenanigans here. Apparently Nene, the soba thoroughbred who has been instructed in the ways of Japanese soba practically since she was in the womb, did not foresee that the cold and drafty arena was going to affect the aroma of her dish. I get the basic point– that Nene, for all her excellence, is too rigid and set in her ways to change what she’s doing in response to her environment– but it still seems a little false to me. I don’t see how you could possibly be an expert in soba on the level she’s supposed to be and not be aware of how temperature affects smell, and accordingly, taste. 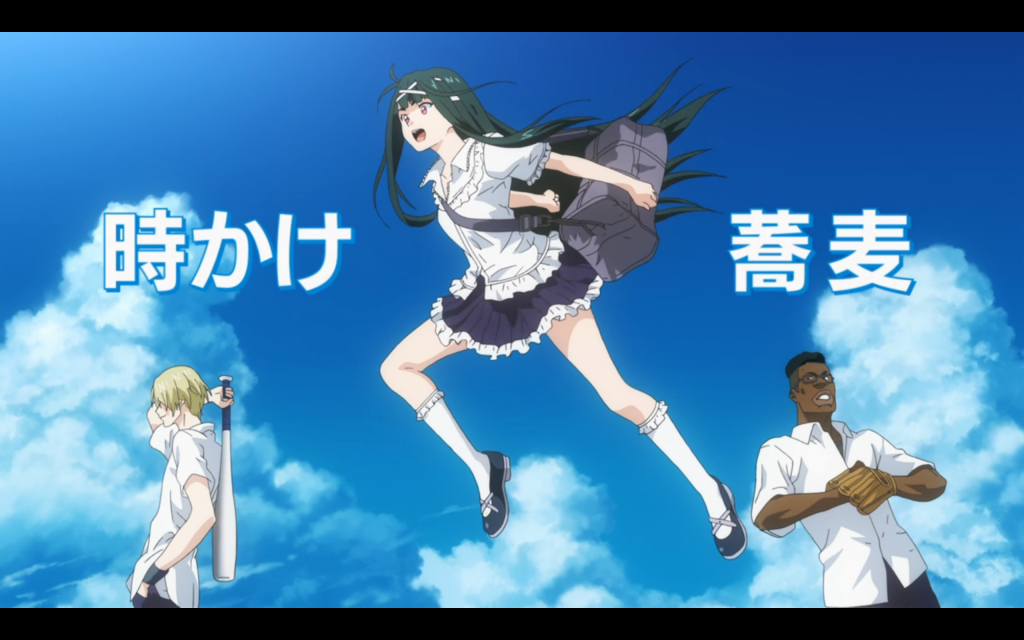 Perhaps now is a good time to admit that I’ve never seen The Girl Who Leapt Through Time? I’m aware that this is a character flaw that I must address, the sooner the better.

I also question whether the WGO judges would be so accepting of Soma’s dish when he comes right out and tells them that he was inspired by instant noodles; aren’t they too snobby for that? Then again, taking “lowbrow” food and repurposing it as fine cuisine has been a trend for a while now, so I guess it makes sense in today’s culinary climate. Ironically, Soma’s “aww shucks man, I’m just a humble diner chef!” style is now working in his favor at the highest echelons of the food world, when it had worked against him at lower levels. I guess sometimes the snobbiest thing of all is proving that you don’t have to be snobby, and that’s where the WGO is. 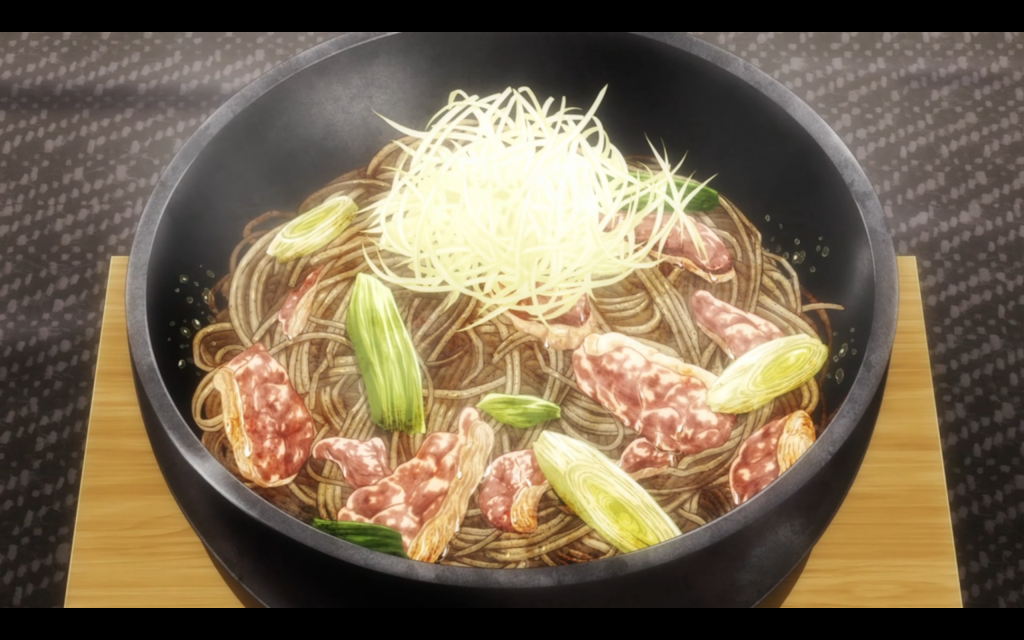 Meanwhile, the third cooking battle commences…entirely offscreen. Without seeing any of the cooking, or the tasting. Or even any mention of the topic. This is downright ridiculous: I get that the third battle was de-emphasized compared to Isshiki and Soma’s matches, but couldn’t we at least have found out what dishes they prepared? It could have been chicken pot pie, for all we know, and I would have liked to see a gourmet take on chicken pot pie! 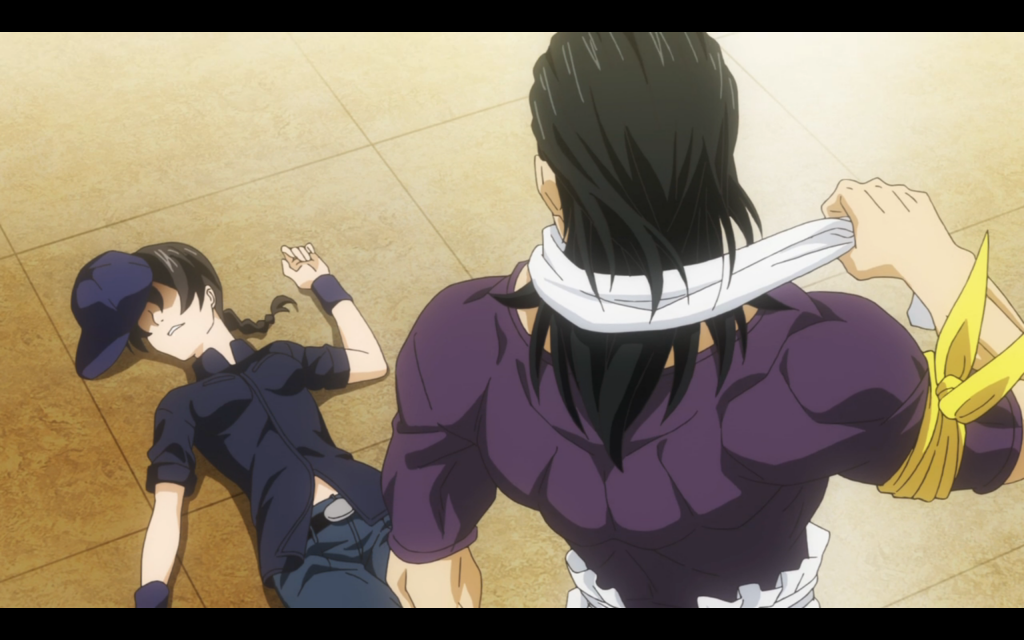 This is wrong. Not because it’s potentially disturbing imagery that brings to mind violence against women (which it is), but MOSTLY because we don’t even know what kind of cooking was going on. WTF????

After a 3-0 shut out in favor of the rebels, even the Elite 10 members are getting a bit concerned about their chances of winning the overall competition. Tsukasa, no. 1 on the Elite 10, is naturally perfectly confident that they’re still going to win, and I don’t even care about him enough to be annoyed by his smug sense of superiority. The show is heavily hinting at a final battle between Tsukasa and Soma, but honestly, I think I’d enjoy it a lot more if Erina was the one to take him down. You can’t make your whole brand centered around pushing incredibly subtle and refined cooking, then expect to win against the God Tongue. I’d much rather see Soma square off against Rindou, which will rapidly become a mirror match.

Well, probably; it’s the end of the season and I still have no idea what Rindou cooks. I’m pretty sure it involves knives. 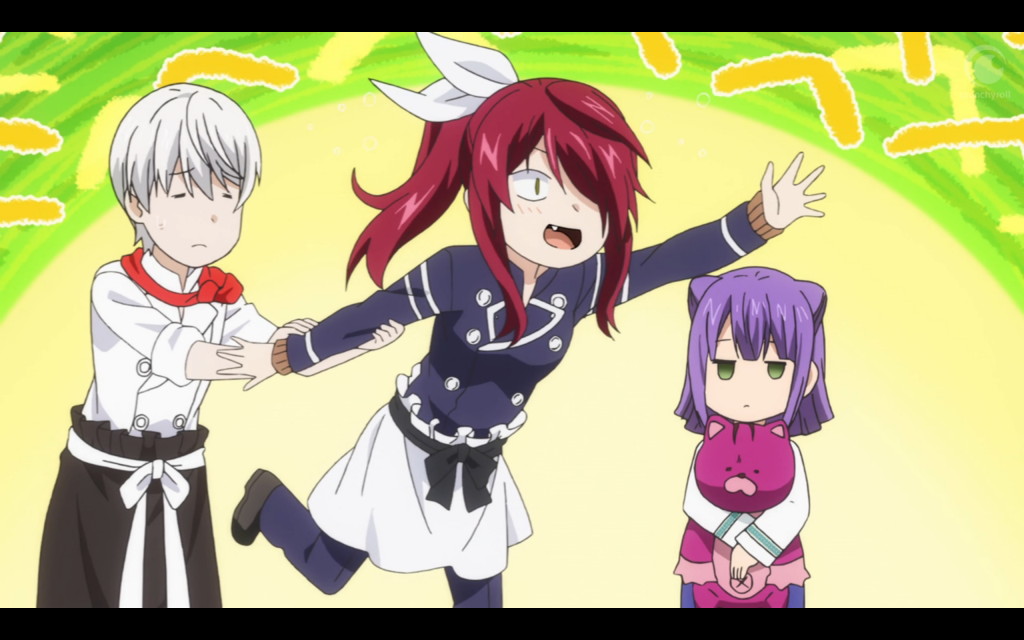 I can’t resist a screen of Rindou being adorable, even though she had virtually nothing to do in this episode. Oh no, end-of-the-season means no Rindou for a while…that does kind of bother me.

Director Azami puts on a good front, but secretly he’s sweating now that he knows his team’s victory is in danger. Good, but I still think this whole thing could be resolved if Saiba just walked over to him and gave him a hug or something. 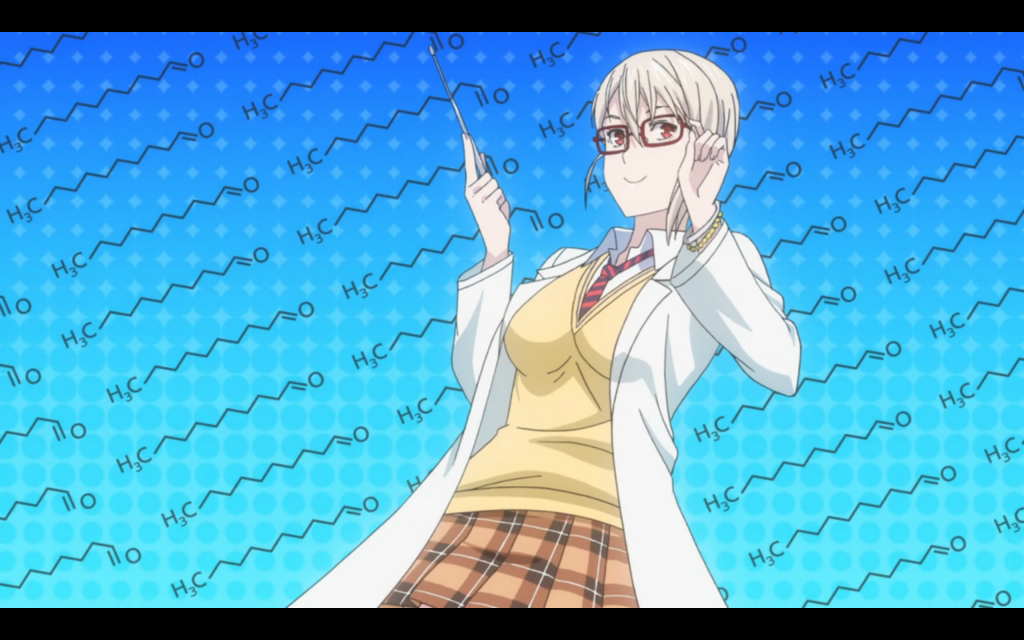 Alice explains chemistry to us unworthy pigs one more time. This is one of those little aspects of the show that I’m going to miss. I want other anime to add little segments where Alice Explains it All; hell, if Attack on Titan adds that, I’d even pick that show up again.

The ending montage features the imagery of the little tiny Soma-chickens attacking Erina, which I love; it’s probably a coincidence, but I’m going to choose to believe that people at JC Staff read my blog and put that in there, just as a little gift for me. I love you too, JC Staff; you know my harshly-worded letters are sent from a place of love, right?

Despite the somewhat abrupt ending, I had an awful lot of fun with this season of Food Wars! and I hope it doesn’t take too long to come back on the air. I don’t know if the manga has enough material left for another double-cour adaptation, but I’d be happy to get a short season sooner rather than later. In fact, the sooner the better, because I’d like to realize my life goal of blogging Food Wars! while pregnant, and I’m not getting any younger over here. C’mon, JC Staff! Take a season off to do Back Street Girls or whatever other nonsense you need to get out of your system, and announce the next season ASAP. My biological clock compels you.