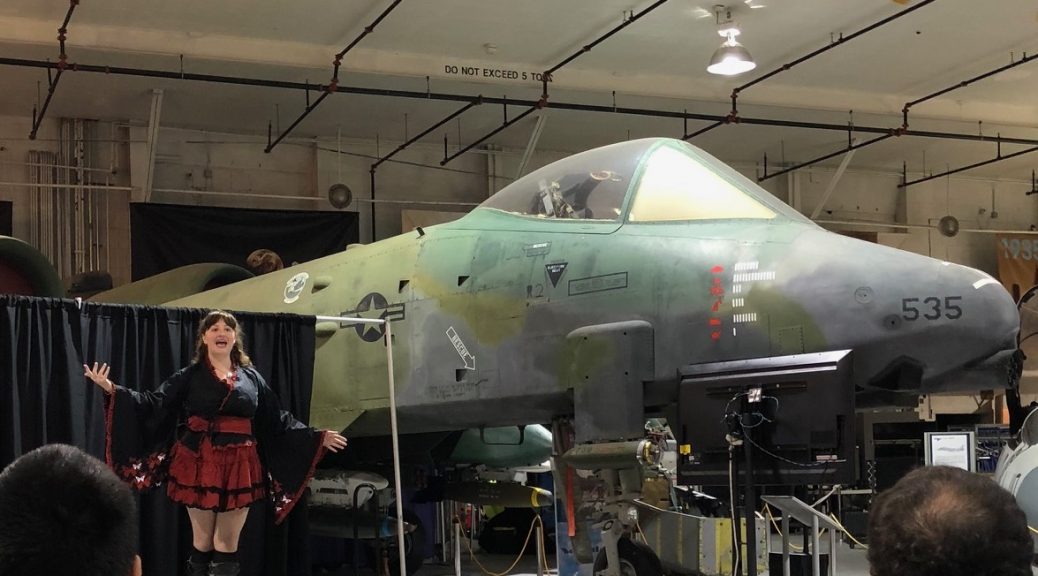 I hadn’t been to a con in years and felt like it was time to get back in the swing of things. Still, I didn’t want to deal with the crowds and hassle associated with a major convention. Cradle Con, a brand-new comic convention, held at The Cradle of Aviation Museum in Garden City, New York, fit the bill very nicely. I ended up deciding to go pretty much at the last minute, so I wasn’t really prepared to cover it anime-blog-style; plus, for some of the time I had a two-year-old in tow, and she was low on patience. Nevertheless, there were some aspects of the con that I wanted to mention here.

The first is the venue. The Cradle has been host to a bunch of cons (including the Long Island Retro Gaming Expo, which is coming up again in August), but this is the first time I’ve actually been there for an event. I’m pretty sure I’ve been to the museum in the past for normal museum-going purposes, but being there while an event is going on is a unique experience. You’ll be cruising through the dealers’ room, looking for good deals on comic books and video games, and next thing you know, you’re navigating around a fully restored WWII-era bomber. They didn’t really separate the museum exhibits from the convention activities, so it was an interesting mixing of worlds. Most of the conventions I’ve attended have been in boring hotels, or the hellmouth that is the Jacob Javits Center in Manhattan (don’t get me started on that place), so this sort of eclectic atmosphere was inviting.

The first event I went to was a Jpop concert with Nicole Oliva. I hadn’t heard of Oliva before, but she’s an operatically trained singer, and takes her anisongs quite seriously. She’s got a powerful set of pipes and a really laid-back stage presence that makes you feel at ease, and her concert easily surpassed my expectations. I mean, of course she sang Moonlight Densetsu, which I expected, but then she also sang the Sailor Stars! theme from the fifth season, and the newer theme to Sailor Moon Crystal. Her version of 1000 Words from Final Fantasy X-2 gave me chills, and I don’t even like Final Fantasy X-2. 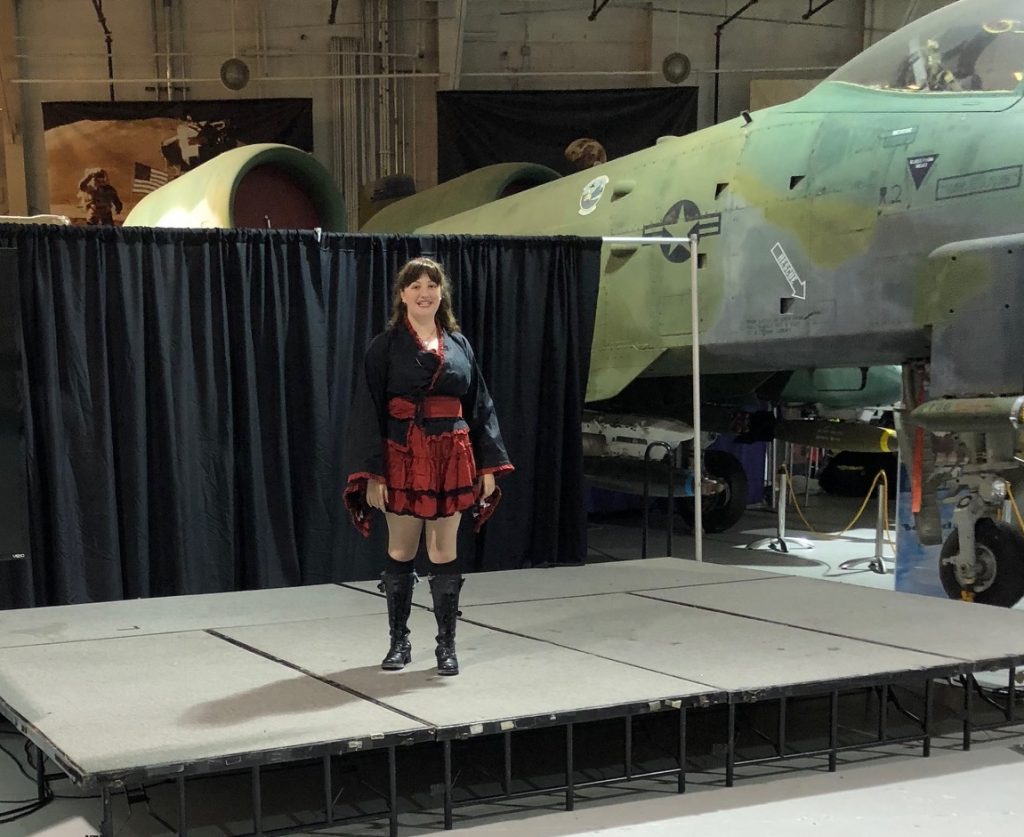 The A10 Thunderbolt II behind Ms. Oliva made a better backdrop for an anime concert than you might think.

Sometimes while in the shower, I imagine getting up on stage at a con and singing my version of Suteki da ne from Final Fantasy X, or Hacking to the Gate from Steins; Gate. The only problem with this plan is that I’m a tremendous coward and will probably never do this. In the meantime, while I try to grow a spine, we can all appreciate Oliva’s performance, since she actually knows what she’s doing.

Next I attended a panel on self-publishing by comic artist Jay Stuart of Poppycock Productions. Most of his work is horror, which isn’t my cup of tea, but he had a lot of good tips on self-publishing…the kind of nuts-and-bolts stuff they don’t tell you until you’re halfway through formatting your comic for print, and then you realize you have a major problem. His advice will likely prove very useful in the event that I ever get back into making comics, which will totally happen as soon as I catch up on my novels and all of my other projects for this blog. Totally.

I also attended the costume contest, which was a lot of fun. Technically Cradle Con has three costume contests: one for kids, one for teens, one for adults. I’m surprised a new con can get enough cosplayers to hold three separate cosplay contests, but I guess that’s the advantage of Long Island; we are stupid overpopulated. We can always find enough kids who want to dress like Pokemon and women who want to dress like Spider-Woman. Anyway, I only attended Saturday, so I only got to see the Adult cosplay contest. Some of the franchises that were represented on stage included Sword Art Online, Sailor Moon, and Final Fantasy XV. There were also quite a few excellent Star Wars costumes; I may not be a Star Wars fan myself, but man, are those people dedicated.

A  note on cosplay photos: I did actually take photos during the con, but I wasn’t sure whether or not I should post them. People who go to Otakon and AX in cosplay know that they’re going to end up included in photo galleries on numerous websites, but that’s not necessarily true of a local con like this. I also didn’t have a press pass, and there was no indication when I was taking photos that I was taking them for any larger purpose, so it just felt kind of morally questionable posting these pictures to Otakusphere. If I go to Cradle Con again next year, which I hope to do, I’d like to go officially as press and then take photos of EVERYTHING.

Lastly, it wouldn’t be a con without my husband and I spending way too much money in the dealer’s room and Artist’s Alley; here’s our haul:

If you’re wondering “How can you afford all that stuff?” the answer is hahaha, WE CAN’T. We kind of blew all of our fun money on this one event and can’t buy anything else for a while. If I go to Anime NYC in the fall, I’m not going to be able to buy anything there except a keychain and a can of soda.

Our loot included three My Little Pony Classic Blind Boxes (which caused me a lot of pain, since I got TWO freakin’ Princess Sparkles and not one Glory), a bunch of Frozen toys to keep the little one happy, a collection of Suburban Fairy Tales by Francis Bonnet, (which came with a neat-o Rapunzel sketch), Suikoden II for PS2 with the strategy guide, a set of Magic cards that my husband just had to buy because he is a slave of WoTC, some X-Men issues from the early ’90s to fill out my collection, an X-Factor trade paperback, a really cool figure of Saber from Fate/Stay Night riding a motorcycle, and a helpful pocket-sized container of hand sanitizer.

All in all, good clean fun. It seemed like everyone around me was really happy to be there, and I think there’s an excellent chance I’ll be heading back to my favorite aviation museum in 2019 for Cradle Con 2.