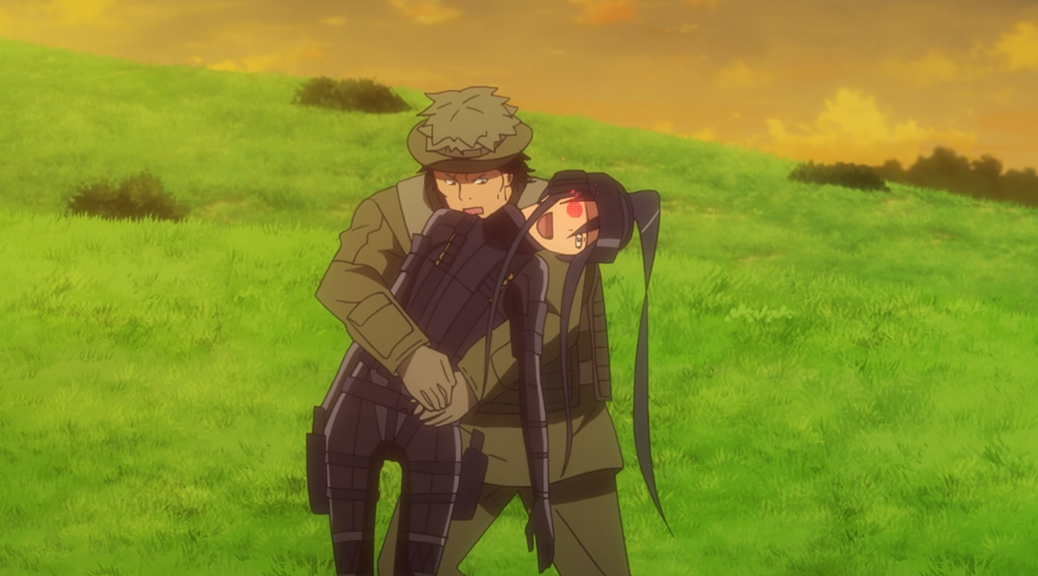 I love how Fuka throws a giant monkey wrench into the drama of this show. LLENN thinks that the situation with Pito and M is something she must silently bear alone, her personal burden, yet Fuka will just blab to anyone they bump into “Yeah Pito is going to kill herself after the game, lol who does that?” So against LLENN’s wishes, the world’s most rockin’ Rhythmic Gymnastics team has been pulled into Operation Don’t Let Pito Die Until We Kill Her.

Post opening, there’s a scene where a team tries to ally with Pito’s team, she refuses, an then they agree to have a cease-fire until both teams are properly separated. Pito naturally breaks the ceasefire immediately and shoots the other team in the back, leaving just one survivor. If this is supposed to be another example of how crazy Pito is, it doesn’t really work, since I kind of agree with her here. If the other team knew enough about Pito’s reputation to want to team up with her, yet didn’t see this coming, they kind of did this to themselves. 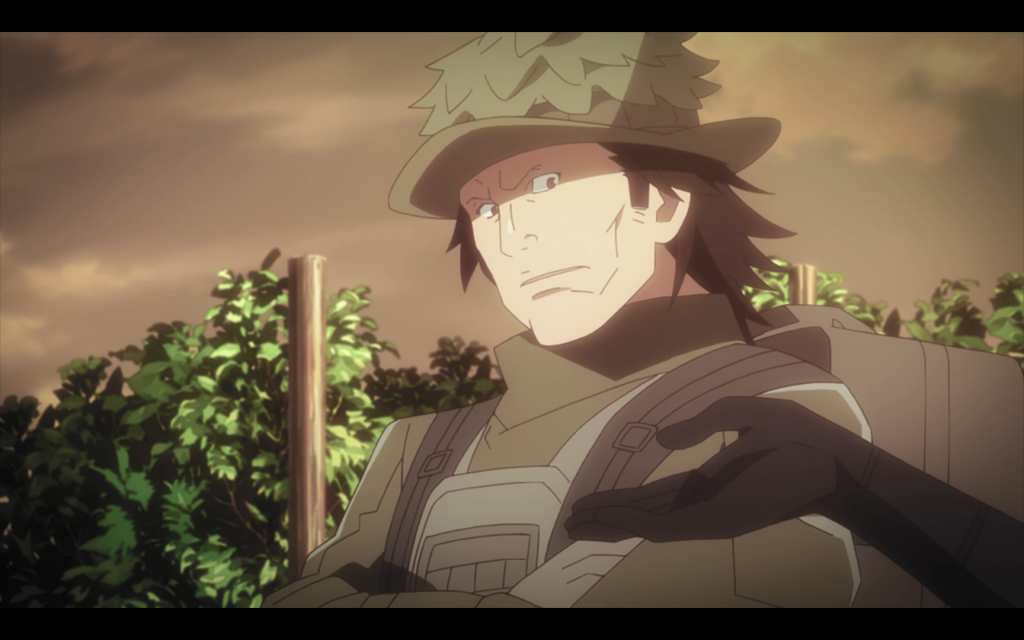 I appreciate Pito and M’s silent communication. “Honey, will you please lend me your handgun? I gotta shoot these stupid doofuses in the back.” “Yes, of course dear.”

This is another time when actually playing MMOs would probably give me a different perspective on this, since I have no idea how popular and commonplace this kind of “gentleman’s agreement” is in competitive shooters. However, it’s been pretty clear from the start that GGO is a “kill or be killed” sort of culture, and once the game starts, all bets are off. Maybe that sort of “let’s all be honorable combatants” thing would work in ALO, but it seems like it’s just foolish here.

Pito does let the last survivor get away, since the girl supposedly doesn’t shoot, and she’s not going to bother killing a non-combatant. It’s clear Pito does have her own brand of personal honor, for whatever it’s worth; it’s just inexplicable to everyone else. 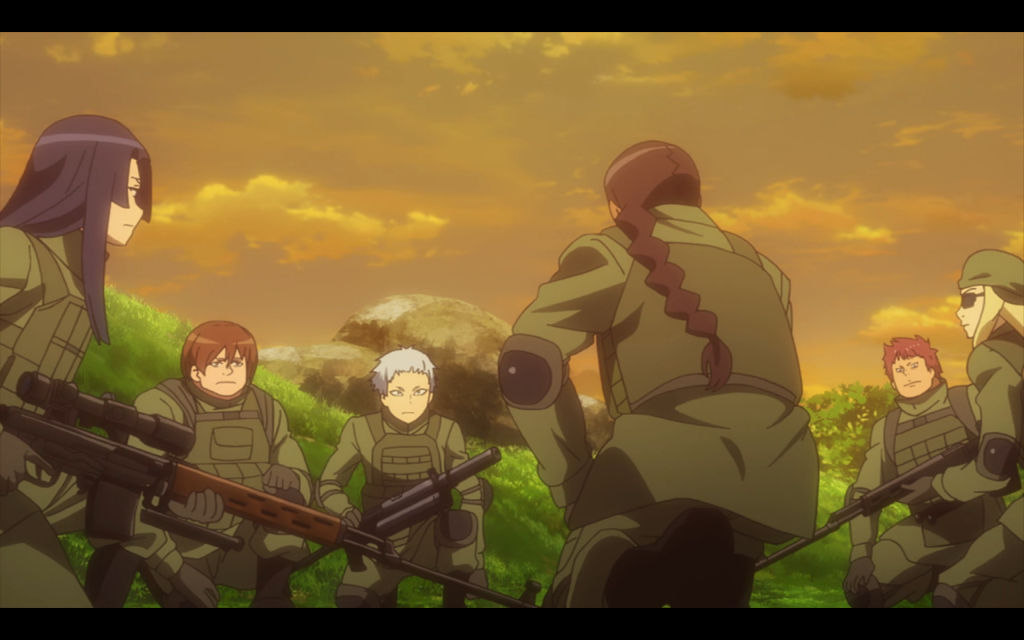 “What are we gonna do?” “Destroy Team PM4 with an anti-tank rifle!” “What are we NOT going to do?” “Gymnastics, LOL!”

The rest of the episode primarily focuses on Team Rhythmic Gymnastics executing their plan to break M’s shield, taking away PM4’s defensive advantage, which they do. It’s a pretty neat plan too, although I wouldn’t be surprised if the rules in GGO change to stop bodies from being considered “immortal objects” for 10 minutes, because man, players are getting a LOT of mileage out of that rule. 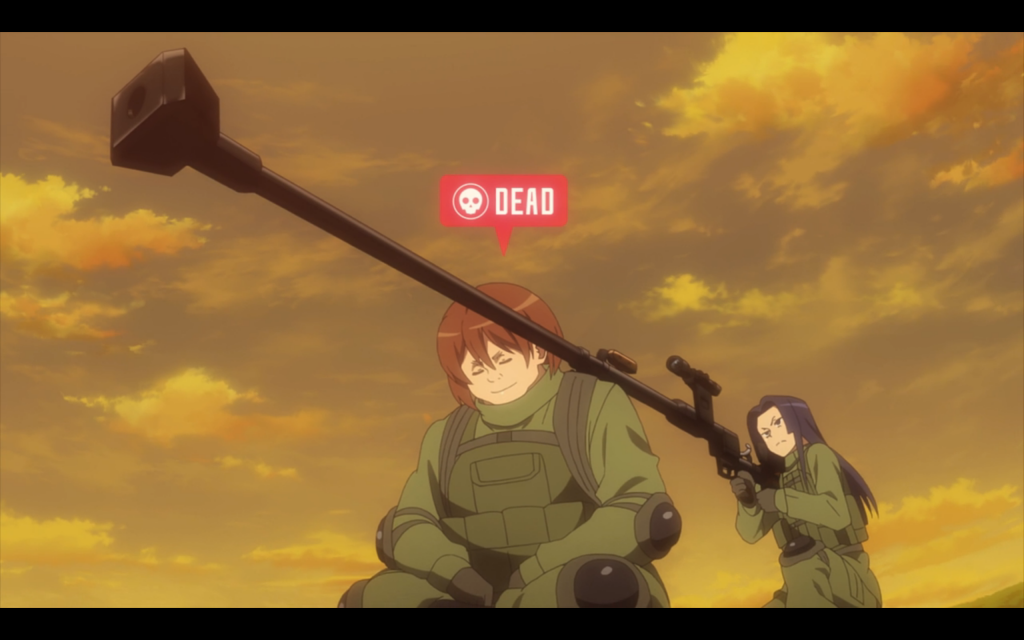 In the next patch, dead bodies will not function as immortal objects, and will instead disappear immediately, like fairy dust. Thanks a lot, LLENN and SHINC.

As an aside, I like the fact that the Machine Gun Lovers got taken out offscreen with no fanfare. Being a gun fetishist is kind of a bad thing in GGO, because using a weapon because it’s cool probably means you don’t have a strategy beyond that. Look at Pito; I think she uses about 12 different weapons, depending on range and the terrain.

After M’s shield is broken, LLENN moves in to take out Pito, except Pito gets sniped in the head by the one girl she let escape earlier, yet survives. I’m on the fence about whether or not this annoys me; on one hand, Pito was shot in the head (through the eye no less), and she really should be dead. Then again, they are inside a video game, where missing limbs grow back after ten minutes and dead bodies become impenetrable titanium shields; real-life rules only apply intermittently.

We learn that Pito must be using a Nerve Gear, which is probably better proof of how insane Pito is than anything we’ve been shown so far. “You know all those critical safety protocols that VR games added after Sword Art Online? Yeah, I don’t want those.” While she recovers, the rest of PM4 fends off another team, but it’s all for naught; the team has infiltrated the log cabin where Pito is recovering! Oh noes, how will Pito and M ever get out of this conundrum??? 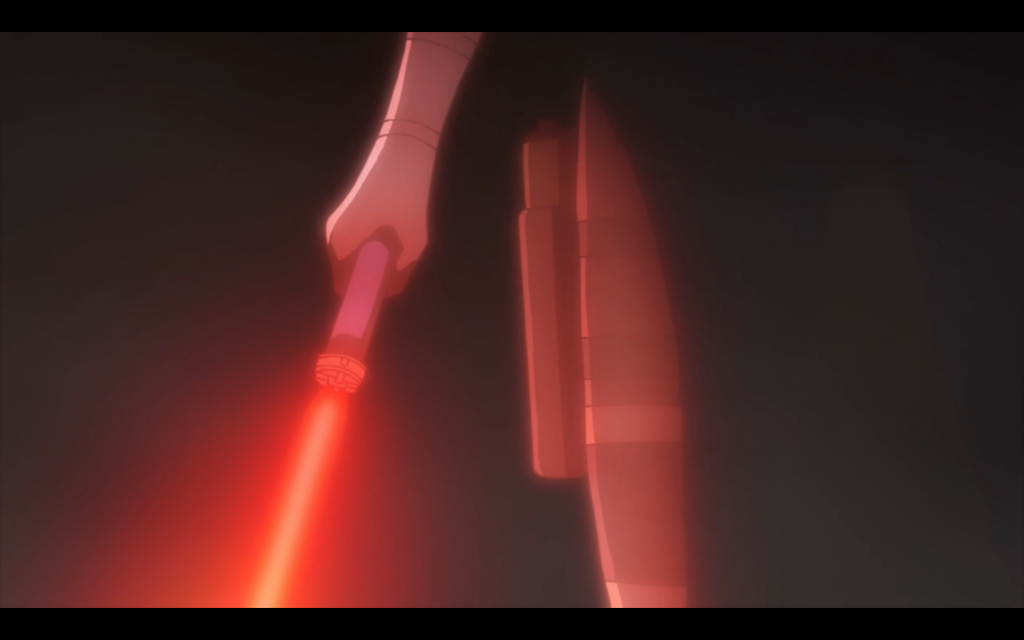 Pito picked up a version of the Photon Sword that Kirito made famous, so it’s all good. I know some people groan at the references to Kirito and Sinon on this show (especially Sinon, who’s been mentioned at least three times), but personally I like it; I like the fact that SAO S2 is acknowledged and in continuity here. The fact that players actually learned things from the last Ballet of Bullets and adopted new weapons/tactics makes the whole situation more credible.

So with the rest of the opposition further whittled down, it looks like our Pito/LLENN face off is finally about to happen. If LLENN ends up perching on the top of Pito’s photon sword and then backflips off at some point, I will do a dance in my chair. I’m not proud of that, I’m just saying that it’s going to happen.

Last thing I’ll mention is how I love how LLENN and the gymnasts have decided that they’ll team up in exchange for lots of yummy sweets next time they meet. Who says that girls using submachine guns and anti-tank rifles can’t be feminine when they feel like it? 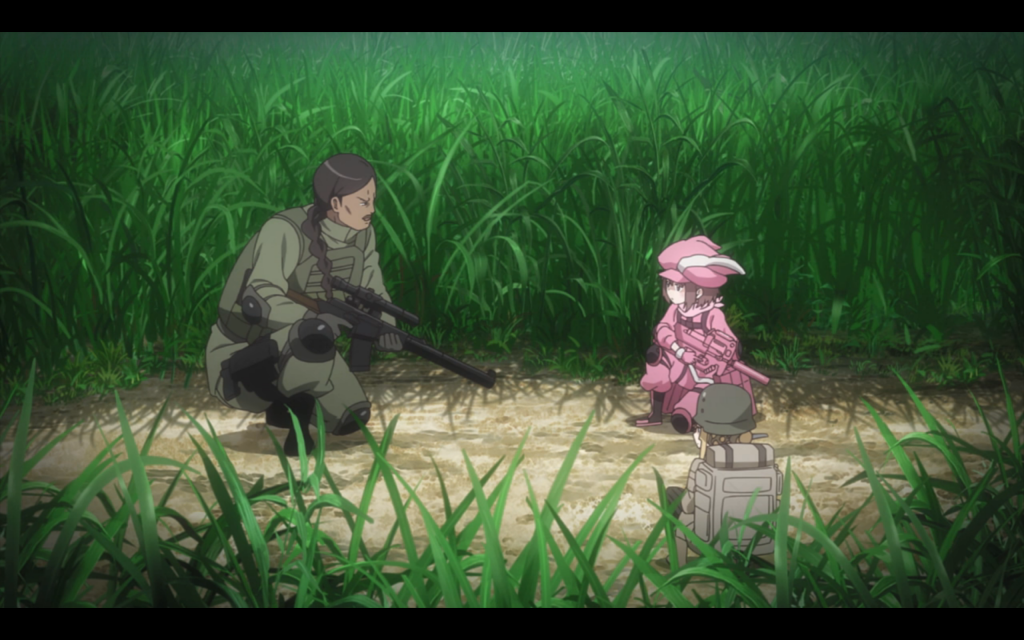 “Look, lives are on the line here, but I think we can all agree that what’s really important is CAKE. Are you prepared to give us more cake?”