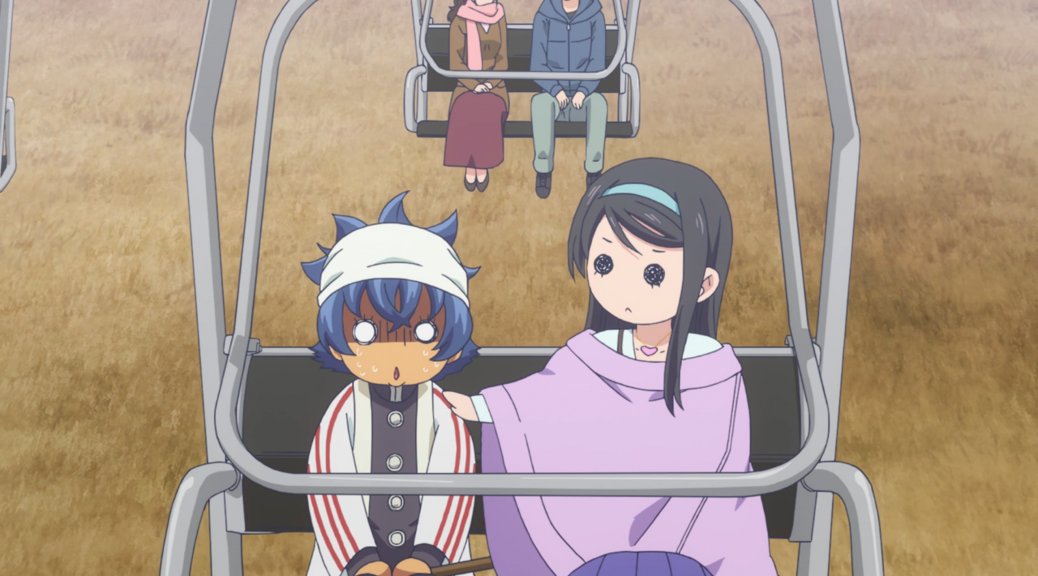 Normally I don’t like to say things like “this episode was a giant trash fire,” because that’s harsh. No matter how much I didn’t like something, using that kind of language is unnecessarily cruel to the people who made the show, and the fans who enjoyed it. In general, I think people are way too quick to compare things to trash and/or excrement just because they didn’t happen to like them.

That said, this entire episode revolved around burning dead grass, so I feel comfortable saying that it was a giant burning grass fire of an episode; that’s just a statement of fact.

Before we go any further, your Weekly Pikari Troll Face: honestly, none of the Pikari faces were that choice this time around, so here’s a version of Pikari Entire Family Troll Face. 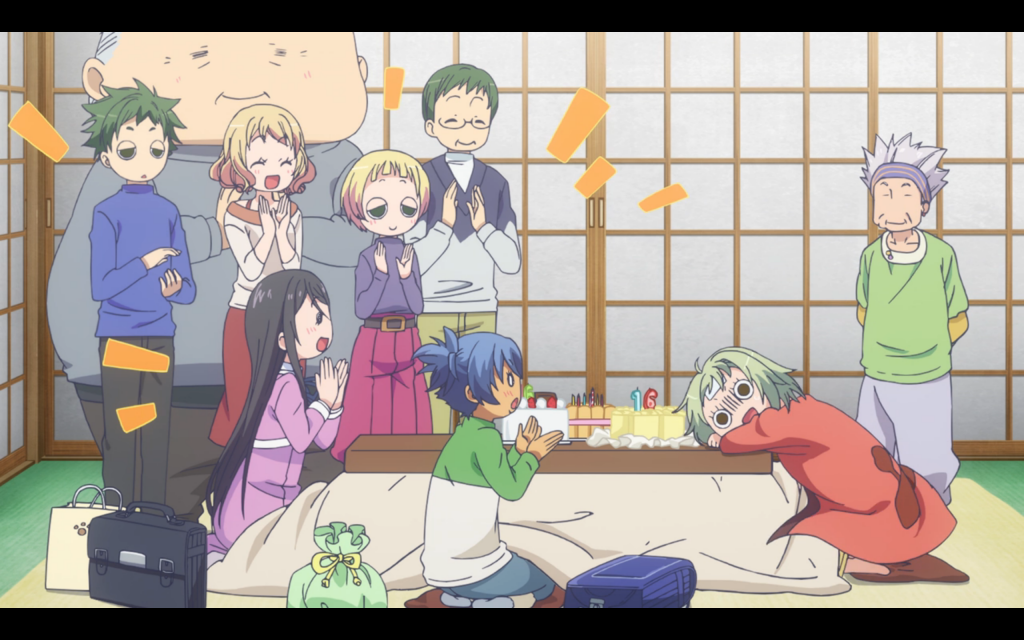 The sheer size of Grandpa continues to be an odd mix of adorable and terrifying.

After last episode’s neat flashback to the early days of scuba diving, this episode has the show returning to entirely land-based antics that mainly feel like a time-filling exercise. Pikari gets sick on her birthday, and everybody brings her cake; later on, they all go to a traditional dead grass fire burning ceremony on a mountain, and we learn that Kokoro is a boy. Whooop.

It had occurred to me that Kokoro might be a feminine-looking boy rather than a masculine-sounding girl, but I never mentioned it in any of these posts because I honestly didn’t care. Other than being mildly surprised, it seems like Pikari and Teko don’t care that much either, so I’m kind of flummoxed as to what the point here is. I think Pikari realizes that she’s probably his first crush, and treats that with the gravity it deserves (whereas in the past, she probably assumed it was just a kind of hero-worship on Kokoro’s part), but that’s really the only good part of this episode; the rare opportunity to see Pikari be the mature one. 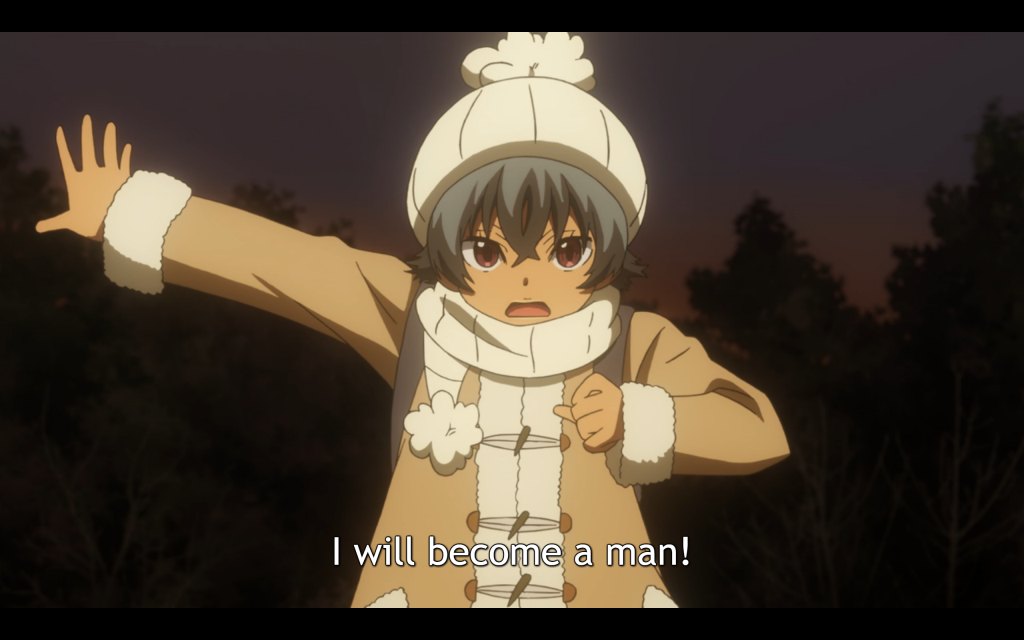 Oh honey, are you ever on the wrong show. You have no idea.

While we’re talking about gender on Amanchu! here for a moment, maybe this a good time to talk about how Pikari and Teko’s relationship has been portrayed. I think during the first season, you could choose to see their feelings for one another as “just friends” if you wanted to, but it’s become increasingly difficult to do that. The imagery with the two of them has gotten more and more romantic. Still, they never refer to themselves as lesbians, are never referred to that way by anyone else, and it’s never made explicit that their love has a sexual aspect. 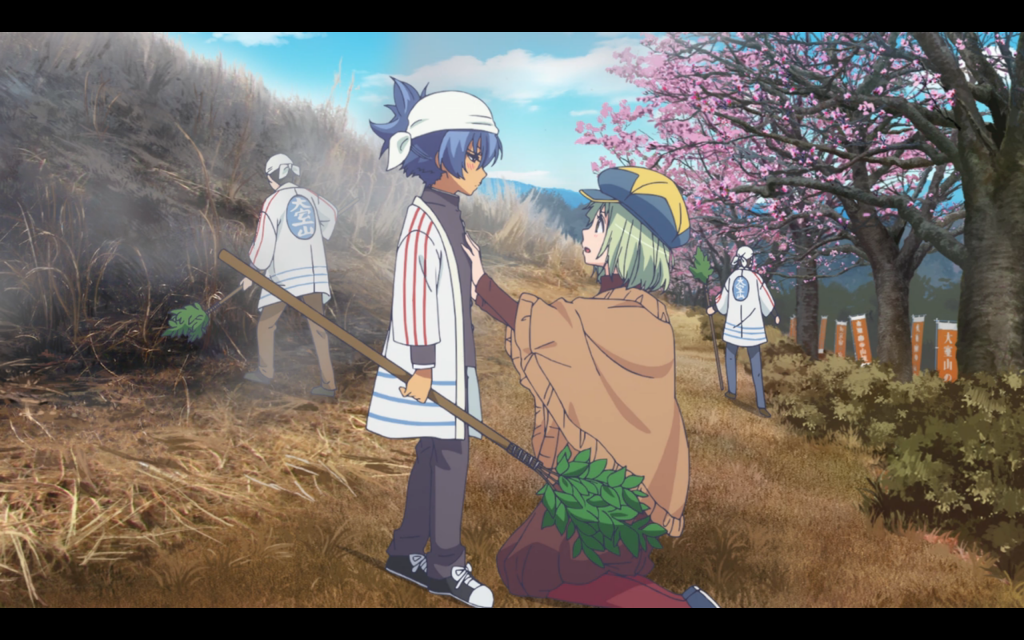 For me personally, it really doesn’t matter whether the two girls have sexual feelings for each other; they obviously love each other, and that’s what matters. However, if you’re watching from the vantage point of looking for an increase in LGBT representation in anime, then the fact that Teko and Pikari are strongly hinted to be lesbians without that ever being confirmed is probably annoying. I don’t really know what to make of that, by the way, I’m just noticing it.

Anyway, this show has really been trying my patience lately. The first half of the show was pretty nicely front-loaded with scuba scenes, but then spent much of the second half goofing off. I mean, I don’t even need the show to focus that heavily on the diving– I know it’s a slice-of-life series as well– but if they’re not going to do a diving plot, it would be nice if the story they did tell felt like it had a purpose. It looks like the final episode will return to diving, but unless that ends up being one hell of an episode, it feels like too-little-too-late at this point.

Oh, and would just like to point out that Mato-chan-sensei is once again hanging out with her teenaged students and blowing off the love of her life; I’m beginning to seriously worry about this woman. Oh, and they brought back Kotori, Teko’s dream buddy from the first “lucid dreaming” episode, and that’s not right! Please, I’m trying so hard to forget that those episodes happened or that I ever liked any of them in the first place!