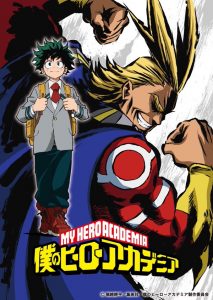 I’m not going to do it. You can’t make me and if you think that looking at me like that is going to change my mind, you’ve got another thing coming.

That’s right, a new trailer for the upcoming My Hero Academia: Two Heroes movie hit the internet yesterday and it is a glorious 92 seconds of everything we love about this show.

The trailer is more than just a 92-second sizzle reel though, as it also reveals a new cast member: Rikiya Koyama playing the villain, Wolfram. If you’re listening not-so-closely, you’ll also hear the movie’s theme song Long Hope Philia by Masaki Suda kick in at about the minute mark.

Is your appetite sufficiently whetted? Good, because there isn’t much time left before this movie premieres around the world. It gets its world premiere at Anime Expo in Los Angeles on July 5th before hitting the big screen in Japan on August 3rd.

Funimation holds the license to this series and describes this movie as:

The climactic finals are over, and U.A. is getting ready for the summer training camp. Deku and All Might receive an invitation from a certain person to go overseas to a giant artificial moving city called I-Island. This island, a kind of “science Hollywood” that gathers the knowledge of scientists from around the world, is holding an exhibition called I-Expo showcasing the results of Quirk and hero item research. In the midst of all this, Deku meets a Quirkless girl named Melissa and remembers his own Quirkless past. Out of the blue, the impregnable security system the island boasts is hacked by villains, and all the people on the island are taken as hostages! Now, a plan that could shake hero society has been put into motion! The man who holds the key to it all is the number one hero and Symbol of Peace, All Might.