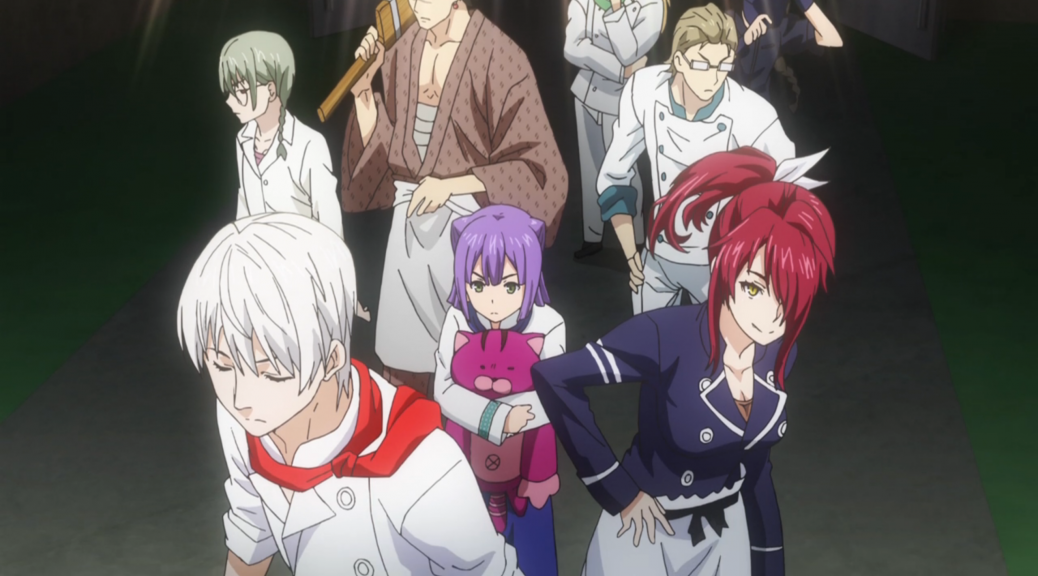 Things are coming to a boiling point on Food Wars! Oh my God, did I just say that? I really just said that. In theory I could go back and delete that sentence and try to open this post another way, but it’s too late now, the die has been cast.

Anyway, flashback time! Episode 21 gives us the background on Saiba (Soma’s Dad) and Azami (Erina’s Dad) that we’ve been craving for a while, but it manages to raise as many questions as it answers, if not more. Long story short, Saiba was the most brilliant chef of his generation, hero-worshipped by his classmates, but the constant pressure to perform eventually got to him and he cracked. Azami’s crazy, Stalin-style plans for food-world domination seem to be based on the idea that he’s never going to let another chef go through what his idol Joichirou Saiba went through…somehow. I guess if a talented chef tried to walk away from Totsuki under Azami’s reign, he’d have them dragged before a firing squad, and that’s his solution to the problem? It’s not entirely clear. 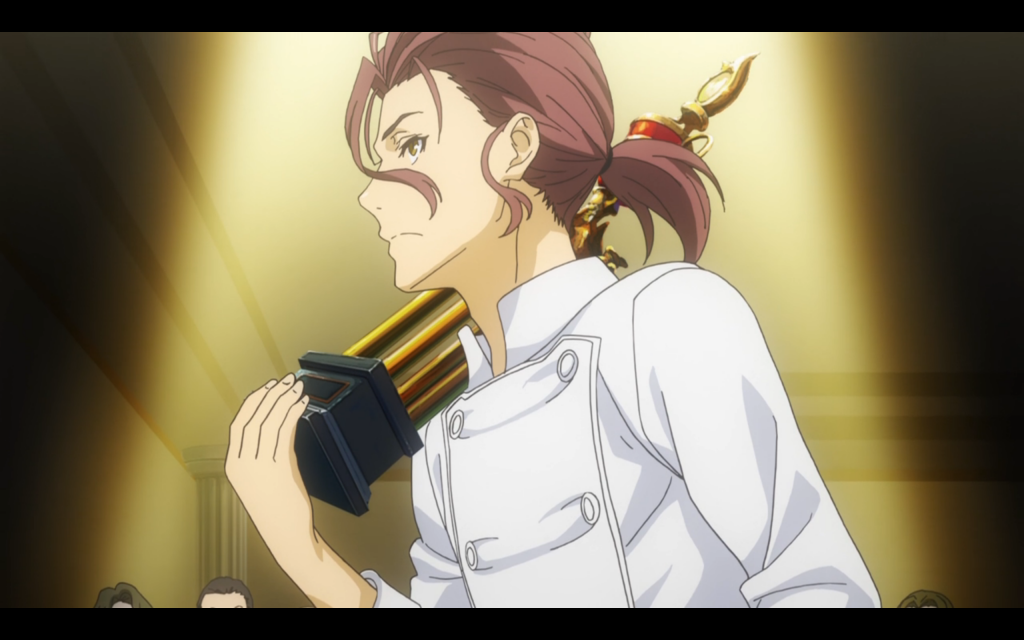 One thing this episode did clarify was how the Elite 10 works. I’ve thought for a while that the rankings weren’t strictly representative of talent; if they were, Erina should be ranked higher than the tenth seat, right? Turns out things like class participation matter, which is why Saiba was never No. 1 of the Elite Ten despite being the undisputed best chef in school. Being Rindou-centric, I wonder how this applies to Rindou, who is No. 2 on the Elite 10, just like Saiba was; there seems to be a parallel between those two for some reason. I wonder if Rindou could be No. 1 if she wanted to, but never shows up to class; that sounds like her.

We still don’t learn anything about Soma’s mom; best guess is that Saiba started working at a diner called Yukihira, named after the owner, and married the boss’s daughter, but that’s speculative. We don’t even know for a fact that Soma is his biological son; he could have married a woman who already had a child. Granted, given the resemblance and all, I’m pretty sure we’re supposed to think that these two are related; I’m just saying, the background is so vague that nothing is certain.

My best guess, which will probably be laughed at by people who have read the manga and know all the answers already (meanies), is that both Soma and Rindou are Saiba’s children, with a woman named Yukihira. When they were still very young, Ms. Yukihira left, taking her daughter with her, and leaving Soma with his Dad. Later on, Ms. Yukihira married a man named Kobayashi, explaining Rindou’s surname. Meanwhile, Rindou knows that Soma is her little brother (hence her special treatment of him), but Soma doesn’t know because Saiba finds the whole subject painful and refuses to talk about it.

There. My theory is probably completely wrong, but it felt good getting it out there.

This episode also gives us another glimpse into why Soma is special as a chef; it’s not talent, because he isn’t far and away better than his contemporaries the way his father was. It’s the fact that he always runs head-first towards a challenge, and enjoys living like that. It’s not just that he tries hard (which he does anyway), but that he seems to have been born with this rock-solid sense of self that cannot be shaken by anything, even repeated failure. “Keep trying, don’t give up,” may be a trite message, but I think they’ve found a novel way of expressing it with Soma; it’s more about how he views the challenge than the fact that he keeps trying. 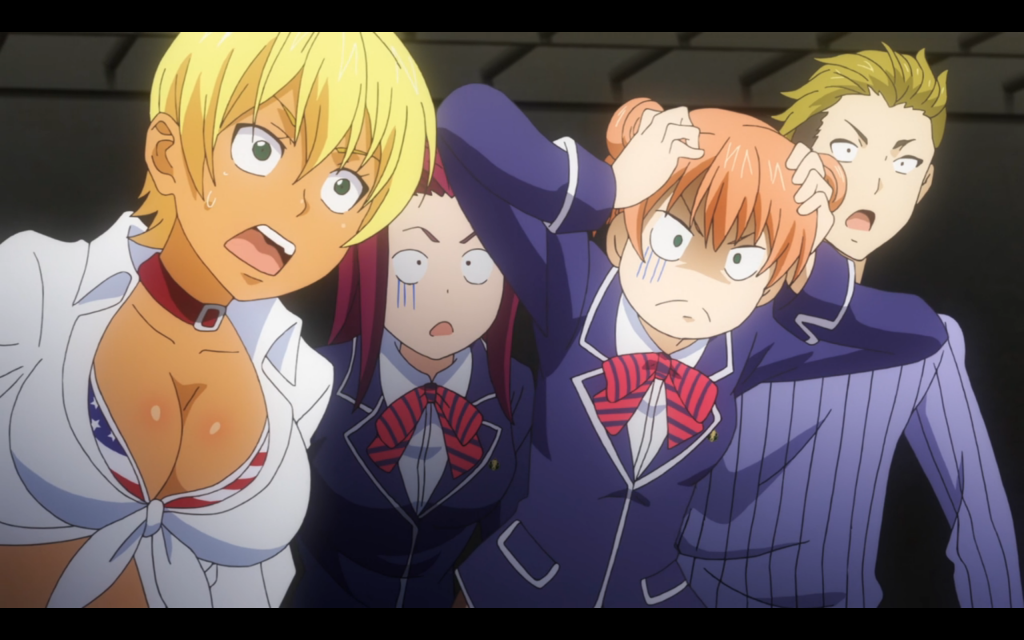 “We’re stuck in a cage with Nikumi’s boobs and Alice’s ego? HOW WILL WE SURVIVE????”

Episode 22 gives us an update on the expelled Totsuki students, with Alice, bless her, taking everything in stride. I’m glad the show acknowledged the fact that as a Nakiri family member, Alice couldn’t just be tossed aside by Central the way Azami wants; it seemed pointless to introduce her Dad in a position of power, and then have him stand by idly while his daughter was disrespected. So the kids have not been sent crying back to Totsuki, because Alice has too much pull for that, so they’re around to watch the Team Shokugeki. Central retaliates by placing the rebel students in an actual cage while they watch the match, and wow, way to be petty, Central.

Meanwhile, the Rebel Alliance (heh) has gathered some other student chefs who haven’t been expelled: Kuga the Chinese Food specialist (which should have been obvious if I thought about it), Isshiki the Naked Apron Senpai (former 7th Seat in the Elite 10), Copy Chef Subaru (the guy who disrespected Takumi’s Mezza Luna, but that’s okay because he’s on our side now), and…this guy. 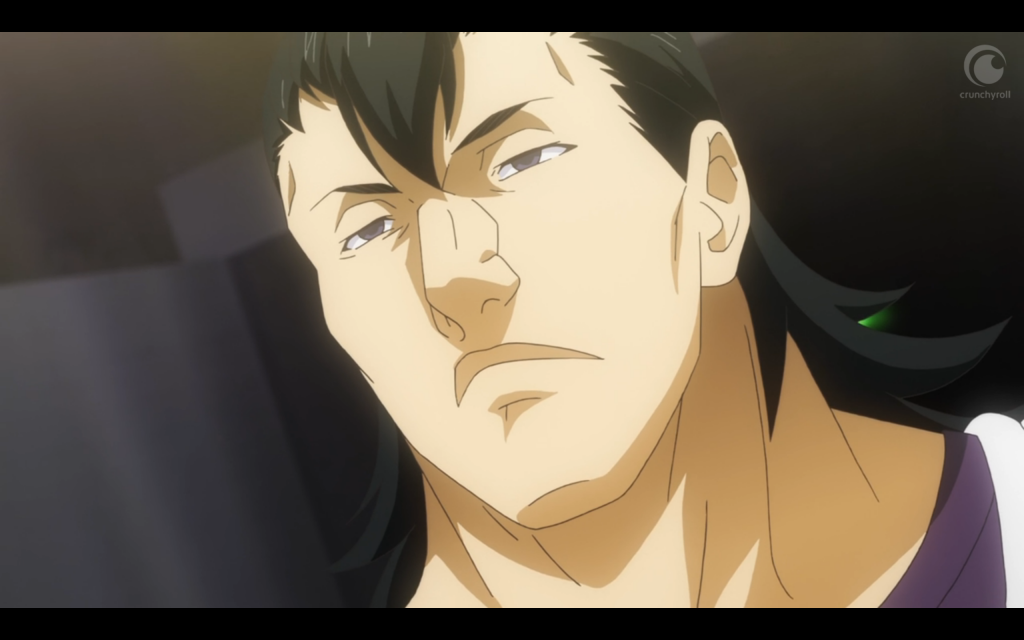 Megushima Toskue. Does anyone remember this guy at all? Because they introduce him like we’re supposed to recognize him, but I swear I have no memory of him being on this show before.

Despite the fact that everyone in the arena is rooting for Central, including the host, we’re led to believe that this is going to be a fair contest, because the Elite 10 have their pride and feel like they shouldn’t need to cheat to crush the rebels. When Nene (6th Seat) gets assigned her specialty, Soba, she’s actually embarrassed that she got such a lucky break, which is cute. I’m wondering how Soma’s going to pull out a win with this one, because he knows damn well that he can’t outcook Nene with traditional soba. They are presenting his diner experience as some kind of superpower (“only SOMA truly knows how to cook for the unwashed masses!”), but I don’t see how that’s going to help him here. We shall see.

More interesting is Isshiki-sempai, who’s being a goofball and having a good time like always. That is, until his opponent has the gall to insult the residents of Isshiki’s beloved Polar Star Dormitory, and Isshiki is just not fucking having it. Apparently he’s been hiding his God-like cooking skills from all and sundry, and now that he’s defending the honor of his dorm, he’s going to show us what he can really do for the first time…including using a knife like Himura Kenshin. I’m intrigued and– not gonna lie– a little aroused. 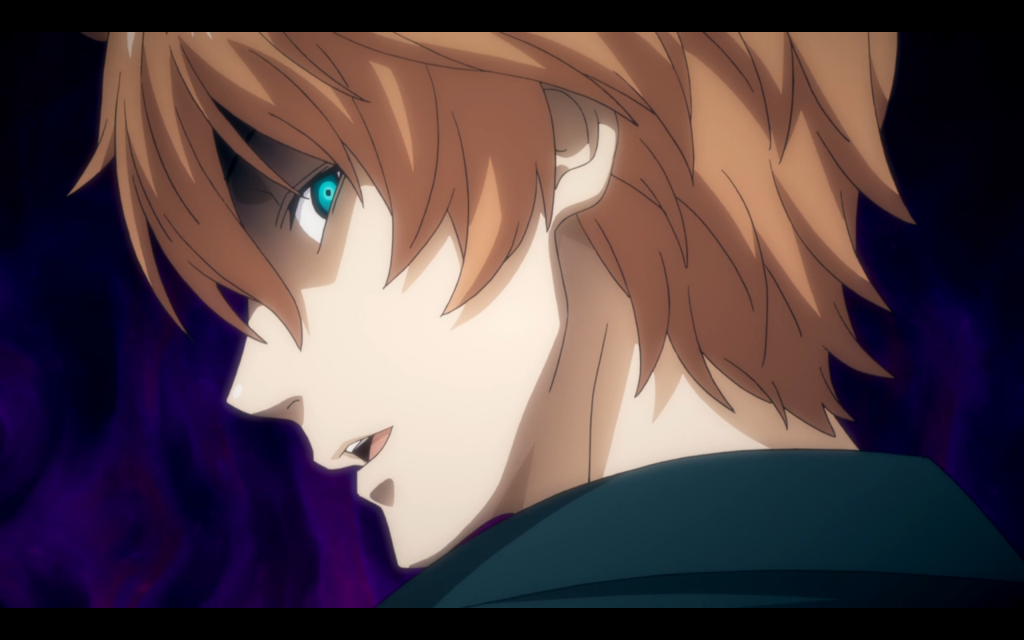 Cooking Battousai is not amused by your remarks.

Mimisaka is facing off against someone we don’t know, unless this person has also appeared on the show before and I just forgot; Food Wars! has too many characters and I can’t keep track. Remember when it was just Soma, his dad, that chick who lived next door, and that was it? Those were the days…except we didn’t have Sexy Naked Apron Ninja Chef Isshiki back then, so I think we’re doing better now. I’m pretty happy now.