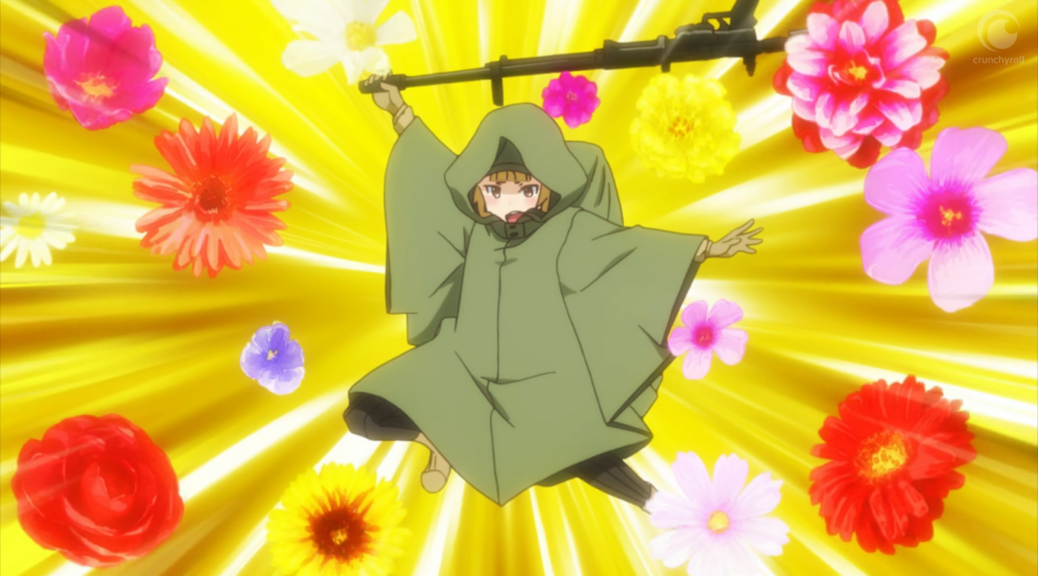 This show has done a lot to assuage my initial fears. From the very start, my biggest problem with the concept was that Gun Gale Online, the game itself, just didn’t look fun to play, and after the last few episodes, I really can’t say that anymore. Personally I’d still prefer to be flying around as a wind fairy in ALO any day of the week, but I admit that I can see why the strategic-yet-visceral gameplay of GGO would be fun.

We get the Pito-Rampage-of-Terror that we were all but promised last episode, and boy does she deliver. I get the impression that Pito is just someone who has an innate talent for violence, like Frank Castle as the Punisher. She doesn’t do any ridiculous acrobatics or make any insanely hard shots or anything, she’s just really quick and decisive and make the shots she needs to make. I hesitate to use the word “realistic” in regard to anything that happens on this show, but I think there is an element of realism to her “massacre” that makes it effective. If she just could just magically shoot people with twin machine guns while doing 15 backflips in the air, it wouldn’t be nearly as effective. 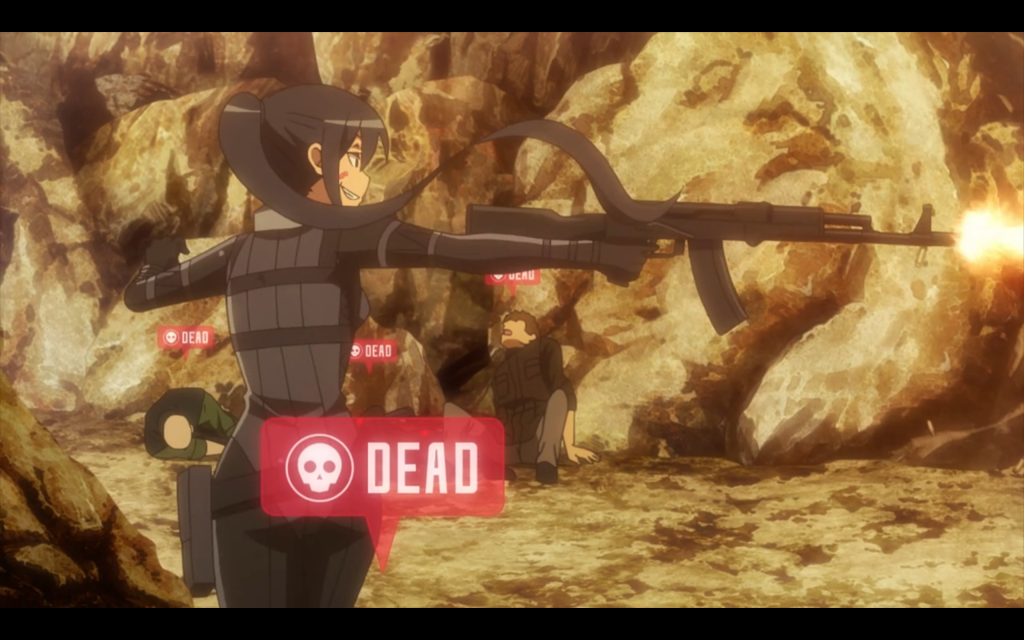 However, as deadly as Pito is, I think the “ten minute massacre” in the title also refers to LLENN taking out about 20 other players. What’s interesting is that LLENN doesn’t want to fight; she wants to take the line of least resistance and slip out of sight, only to resort to fighting three other teams when she has no other choice. I wonder if there’s an element of LLENN lying to herself here; pretending she’s the nice gal who only fights when she has to, when in reality she’s even more dangerous in combat than Pito is, because she doesn’t waste time grandstanding. 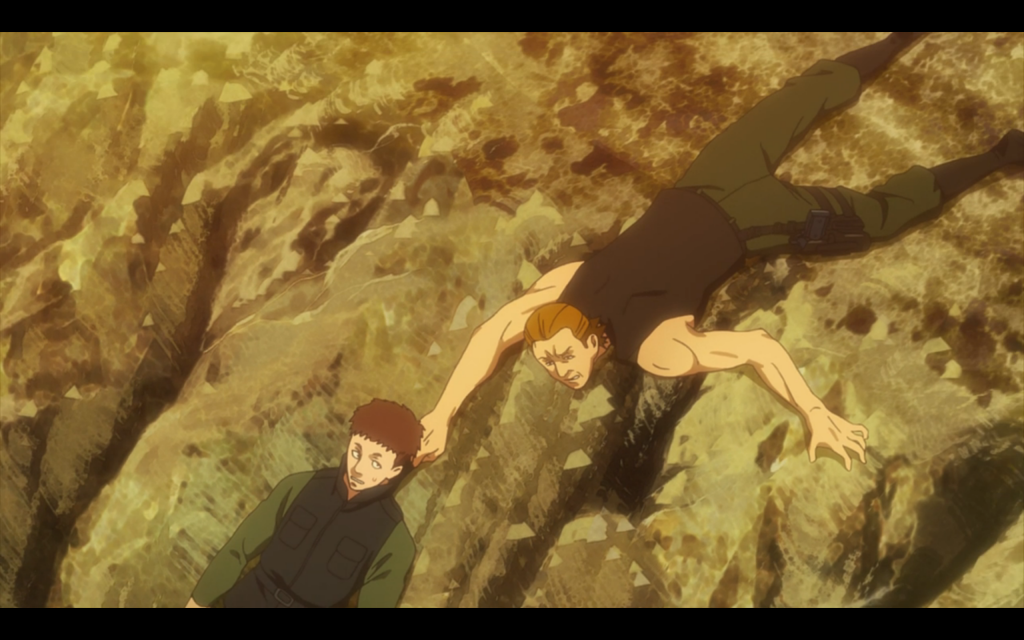 I don’t get what the deal is with these two dudes, desperately holding on for dear life when it’s clear they’ve lost the battle. Guys, your dedication is impressive, but this isn’t not Sword Art Online; you know you can just log out of the game once you lose, right?

Now I’m having flashbacks to Metal Gear Solid and Liquid Snake sneering “You ENJOY all the killing!” and argh, I did not want to think about that today. Now I have Cam Clarke’s voice in my head, and it’s probably going to stay there for about three hours. Damn you MGS and your intensely memorable voice acting!

On another note, I’m beginning to wonder if Pito is really as crazy as M says. We really only have his word for it that she’s planning to kill them both, and for all we know, he could be the true crazy one. You’ll notice that for all of Pito’s ruthlessness in battle, she’s very well aware that the people she “kills” are going to be chilling out in the lobby the moment she’s done with them, and she seems to be perfectly happy about that. It’s still entirely possible that what M told us about her is true, but I’m not certain.

Speaking of crazy, some creepy guy tells Fuka that he wants to kill her and then grope her character’s corpse, and uh…why would you say that? I think the creators just wanted an excuse for Fuka to be able to bludgeon someone to death with her grenade launcher without us having to waste even a second feeling sorry for the dude. Incidentally, that’s the part of PVP gamer culture that creeps me out; I mean, I know it’s not real, and no one’s corpse is really getting groped, but it’s just…why would you even go there? I kind of wish Fuka was there to be awesome and stomp over ever creepy player who says things like this, but sadly she cannot be everywhere at once; sadly, we do not live in a world of Infinite Fukas (although I think scientists really outta get on that right away.)

Anyway, we then get a weird scene where a female player hits on LLENN a whole lot, and it’s kind of irritating. I get that it’s supposed to be humorously awkward, but it just drags on for too long. I do however enjoy how psyched LLENN got at the idea of getting more ammo; you can tell she’s become a true gamer now, the way she lusts after bullets. 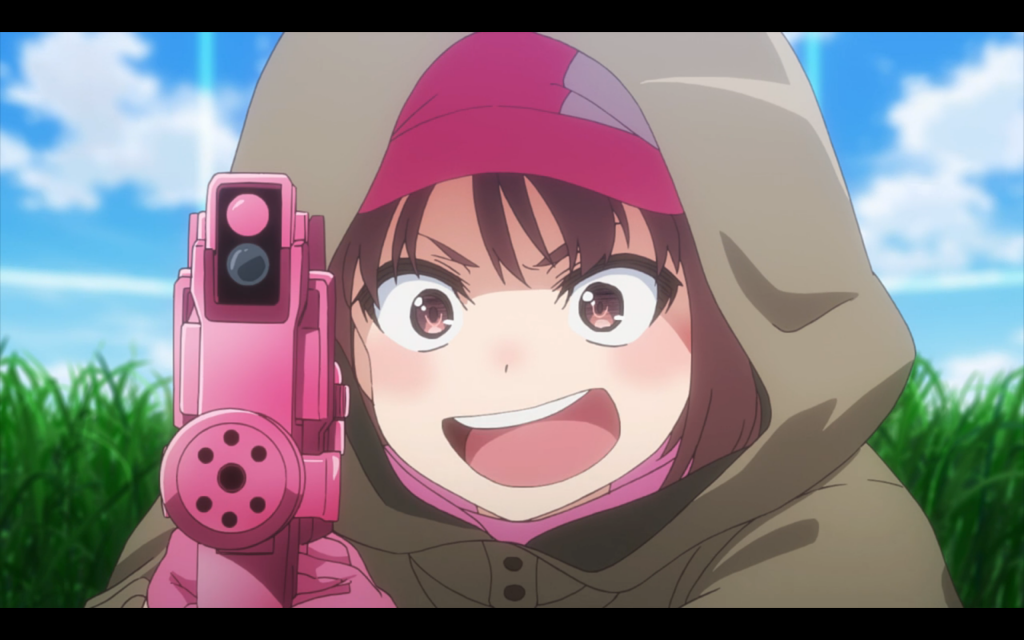 This is the face I make whenever I discover a cache of ammo in Tomb Raider, except I’m less maniacally adorable and more just, well…maniacal.

That annoying scene serves a purpose though, because it allows a skilled team to sneak up on Team Death By Loli, and then we’re at the end of the episode. Looks like we have at least one more episode of the girls wreaking utter havok before the inevitable Pito/LLENN face off, so I hope they continue enjoying themselves.