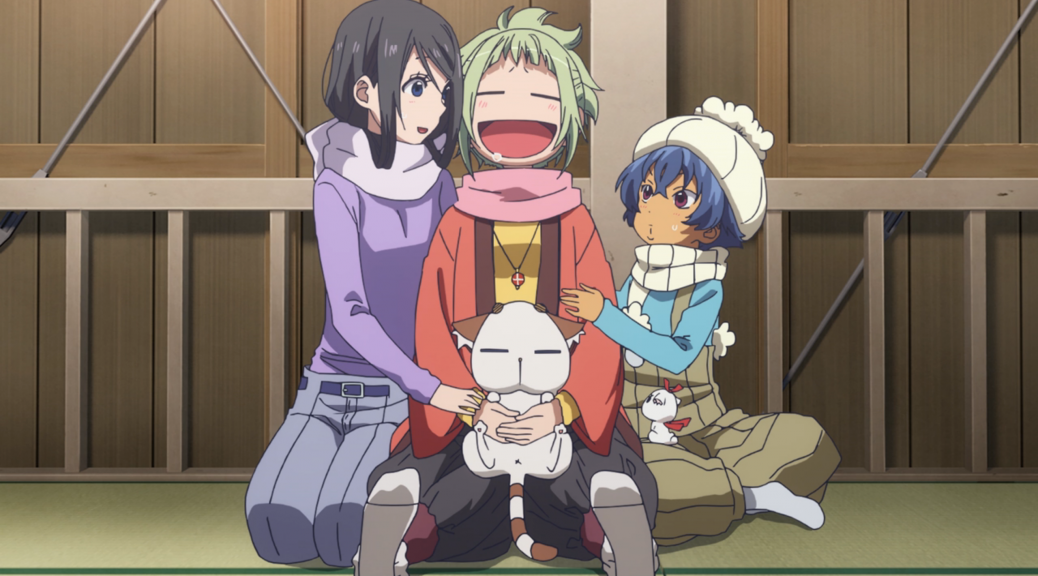 Last time, I was so upset about the state of affairs in Amanchu! that I didn’t even bother to share my favorite Pikari Troll Face. My only recourse now is to share a Pikari Troll Face that’s so great, it can cover several weeks: 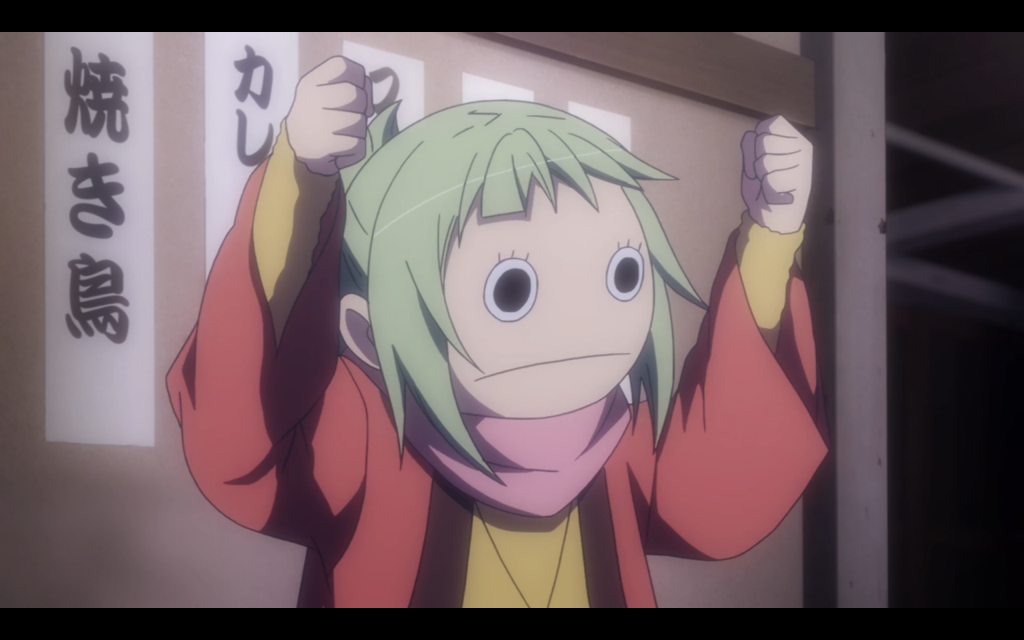 I love how in this sort of in-between frame she’s not sure whether she should be excited or not. Like she’s about ready to yell out “Whoop!” but Mato-chan Sensei recently told her “learn to read the room!” and now she’s questioning herself. Whoop?

Anyway, after dabbling with a well-meaning but ultimately dull storyarc, this episode was more of the Amanchu! we’ve come to know and love. In addition to having some scuba diving scenes (actual diving! Not even kidding!), it also had a really warm and cozy vibe, like you were right there hanging out with the characters and drinking pork soup with them. Considering that all the characters are basically camping out for the night at the Amanchu storefront, it was practically an episode of Yuru Camp; since everyone and their Dad loved Yuru Camp, why not? It works. 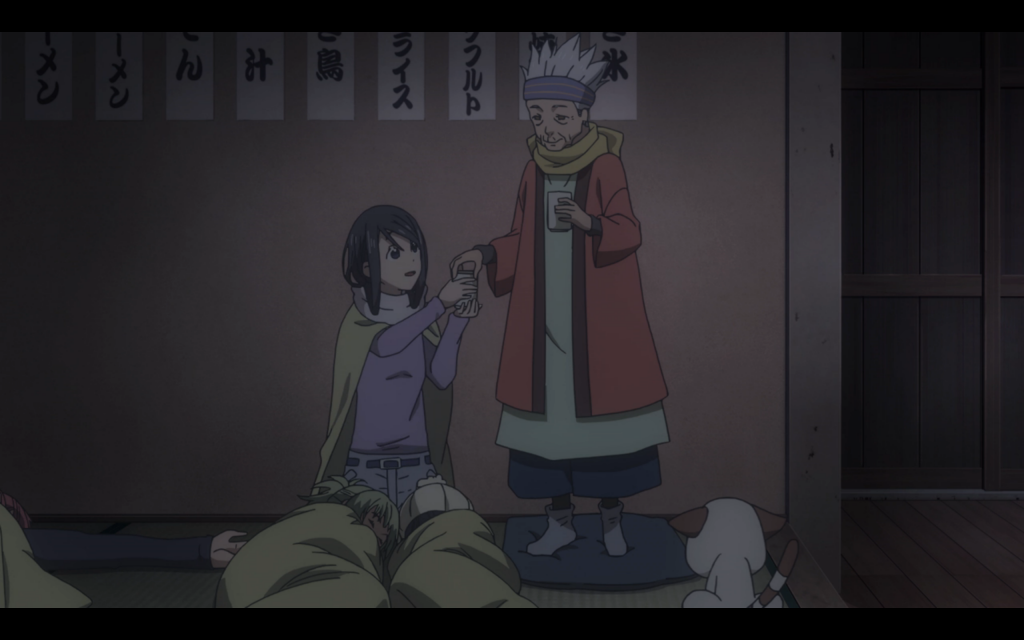 This is so snuggly, I love it. Teko and Kokoro fighting over who gets to be Pikari’s pillow is pretty cute, although the results are predictable: Kokoro is 100 years too early to challenge Teko on the subject of being all up in Pikari’s business.

I don’t know what it is about this show that makes me feel like it’s riffing on other shows so much; another show could do a camp-out New Year’s Party like this, and I probably wouldn’t immediately think “Yuru Camp vibes.” I think Amanchu! is kind of a skilled chameleon, where different episodes bring different sort of feelings up to the surface very effectively, so it tends to remind you of other good shows. Except, err, for the last three episodes.

Speaking of which, I have to wonder what Mato-chan Sensei was doing at this party; doesn’t she have a boyfriend now? If we had to sit through that insufferable Peter Pan arc, at least Mato-chan should get some action out of it, you know? I wonder if that other teacher is just sitting, drinking cheap beer at home, wondering why the love of his life ditched him on New Years Eve for a bunch of teenagers. 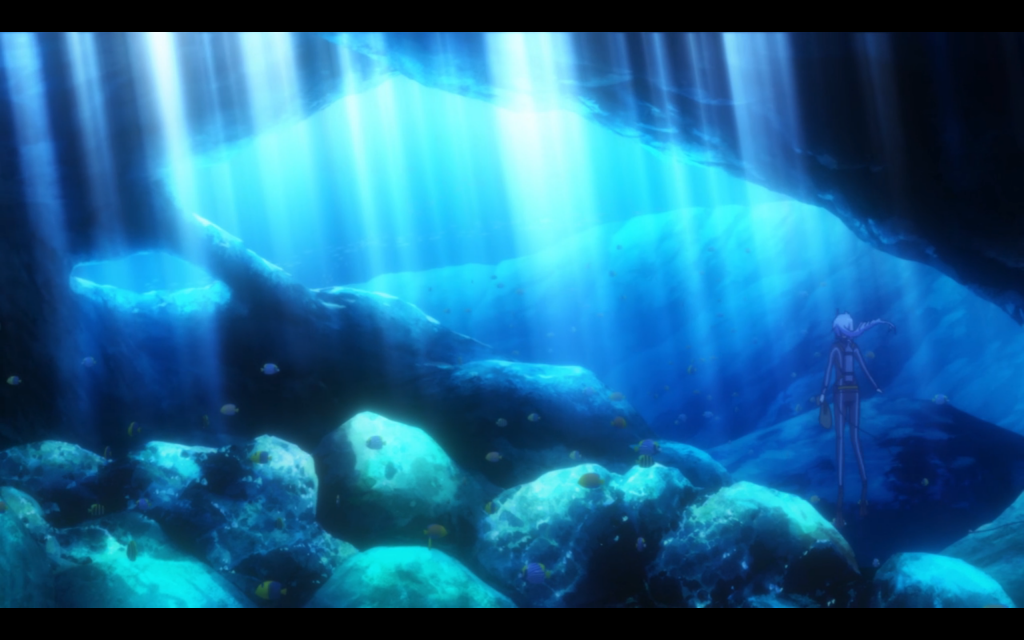 The focus on Pikari’s grandmother was unexpected, but really pleasant. I definitely was not sitting around thinking that I needed to know more about Grandma’s past, but the whole idea that she was a pearl diver who fell in love with scuba diving back when it was new and little-known is a good hook. I would be totally up for an OVA all about Grandma Pikari back in the ’50s and ’60s; I’m pretty sure we won’t get one, but it would be amazing. 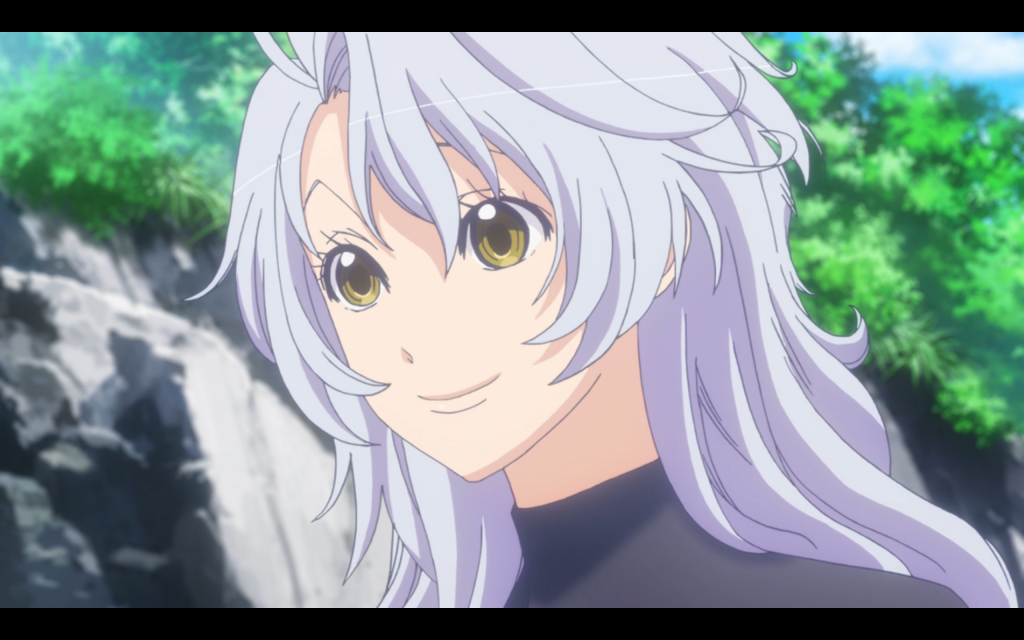 One of the lesser-known rules of anime: the more old and plain a Grandma looks now, the more insanely smoking hot she was back in the day. Seriously, she is like the hottest Amanchu girl, which is saying something.

Now that we’ve only got a few episodes left, I’m assuming (knock wood) that they will be about Pikari and Teko going diving together again. I’d love for them to have one more little adventure all by themselves, falling in love amidst the wonders of the sea. Thematically, to come full circle this season probably should involve the two girls being separated, or at least anticipating separation, but I kind of hope we don’t go there; I just want them to be happy together for a while longer.