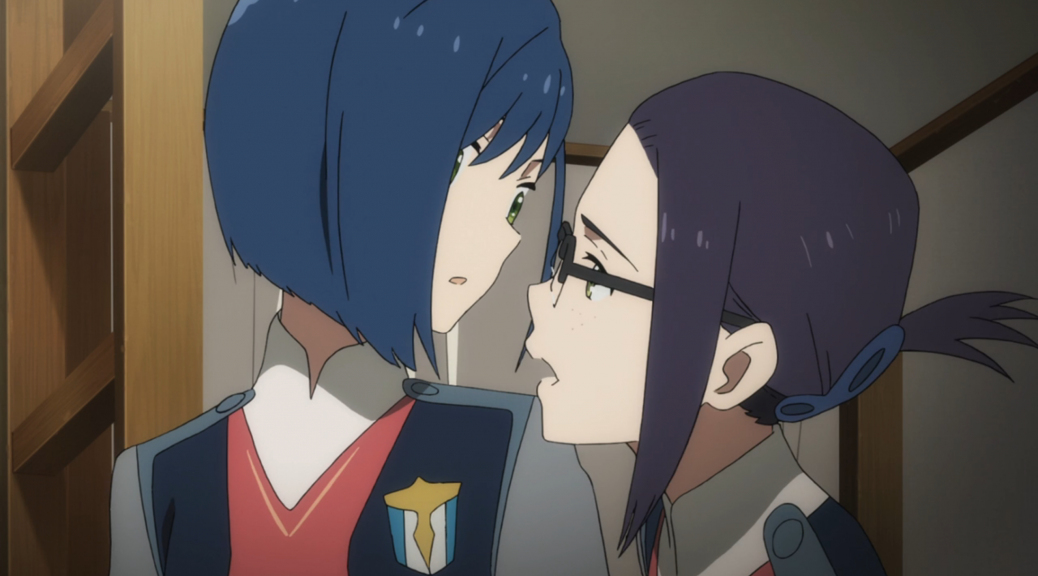 This batch of episodes was dominated by the “how we got here” flashback episode, which was very reminiscent of Evangelion’s 21st episode. You might think this similarity would be a bad thing, but that episode happens to be one of my favorite episodes of anything, period, so if you’re going to copy something, that’s an excellent choice.

Seriously, at this point I think the similarities to Eva are such that it’s not that the show is “copying” Eva, but it’s very consciously using Eva as a template, and we’re supposed to notice. The scene where Karina says that she doesn’t want immortality because she’s thinking of having a baby is very reminiscent of Fuyutsuki and Yui Ikari’s first meeting, when he asks her about her future and she says she’s “thinking about getting married and having children.” The more I think about it, that scene– where Yui gives that unexpected response and Fuyutsuki looks at her with a mix of shock and wonder– is Darling in a nutshell. Like the creators took that one tiny, blink-and-you’ll miss it moment in Evangelion and created a whole show around it. I’m pretty sure that’s not what literally happened, but I love the idea of it.

Anyway, onto our beloved parasites. My girl Kokoro is not one to let the grass grow under her feet; no sooner did I say last time that the future for their world was probably about having kids instead of fighting Klaxosaurs, and she’s all in Mitsuru’s face about making a baby. The romance between Mitsuru and Kokoro happened very fast, but I find it believable; it’s hormonal teenagers, stuck in a hurry-up-and-wait situation, who have just discovered that sex exists. The implication is that this is what Papa wanted to happen too, but I don’t think he really cared about the kids specifically; I think he just wants to observe humanity in it’s “natural” state, outside of the stagnant and ossified society that he unwittingly helped create. When Mitsuru and Kokoro get their memories erased, I get the impression that he was pissed off more because his experiment was curtailed than because he gives a toss about either of them. That said, Papa seems to be the only one who’s doing good things for the kids, even if his motives are entirely self-serving.

About “Papa,” I wonder: do they call him Papa because he used his DNA to create them, and they’re literally all his children? That would make logical sense (especially because at the time parasites were being created, a lot of people were already sterilized, so he may have been one of the few people who could serve as a father), but I don’t think that’s it; my gut is telling me that 02 is Papa’s only true child. My guess is that they harvested DNA for parasite creation before everyone was sterilized, and Werner Franxx is called “Papa” simply because he was the head of parasite creation. Maybe I just don’t want to believe that all the parasites are siblings, because I think that would be a bad direction for the show to go.

Meanwhile, with 02 finding grey hair on Miku’s head and the various problems the kids have been having, it’s clear something bad is going on with their health. Maybe parasites aren’t designed to live past their teenaged years, but I think it’s more likely that the very act of piloting is sucking the life out of them. I thought that the ending was likely to involve the other kids living on after Hiro and 02 die, but now I’m not so sure about that.

This part of the show also gives us confirmation on something hinted at all along; Ikuno is a lesbian. To me, her frustration about having to pilot a FRANXX with a male partner mirrors the frustration gays and lesbians feel when they want to have a child, or otherwise having to fit within the general male/female paradigm; this gels well with what I’ve thought all along, which is that piloting is a metaphor for not just sex, but conception. If it was only about having sex, Ikuno and Ichigo could pilot a FRANXX all day long (well, assuming Ichigo was up for it), but that’s not what it’s about. They can’t create new life together, and it’s frustrating and unfair, but it’s a fact.

Apparently, if my internet sources are correct, some people have taken this scene to mean that the creators of FRANXX are saying that lesbians shouldn’t exist or something, and that’s just…that’s just…sigh….

Look, I’ve been trying really hard not to talk about the criticism I’ve heard of this show too much, but this is a good time to mention that I can’t believe just how off-base several professional anime critics have been in regard to this show so far. Yes we’re all entitled to our opinions and so on and so forth, but the criticism I’ve seen of FRANXX has been on the level of reading Lolita and then deciding that Nabokov must be advocating for everyone to go out and have sex with 10-year-olds. It’s…functionally illiterate. This is the old maxim “when you have a big enough hammer, everything looks like a nail” in action; in the anime criticism sphere, some folks have giant titanium mallets with GENDER POLITICS written on the side, and they will hammer all day long until any substance below is reduced to mush.

I should note that the moment in the second OP where 02 and Hiro embrace, and she phases through him and disappears, only for him to disappear a moment later, gives me a minor case of the chills, every time. I don’t know what it is exactly; it could be that I’m afraid the characters are going to die soon, but I think that’s very likely to happen, so I’m not really afraid of it. I guess it’s just that you can’t have a whole show be about the creation of new life, and not deal with the flipside of that; that we’re all only here for an instant.

As I write this, episode 20 has just come out; now that I’m caught up, I’m going to start doing single-episode posts. I’m apprehensive about what comes next, just because this show has so far exceeded my expectations so much that I’m afraid of how I’ll feel if it falls apart in the last stretch. I don’t think it will, but we’ll see.