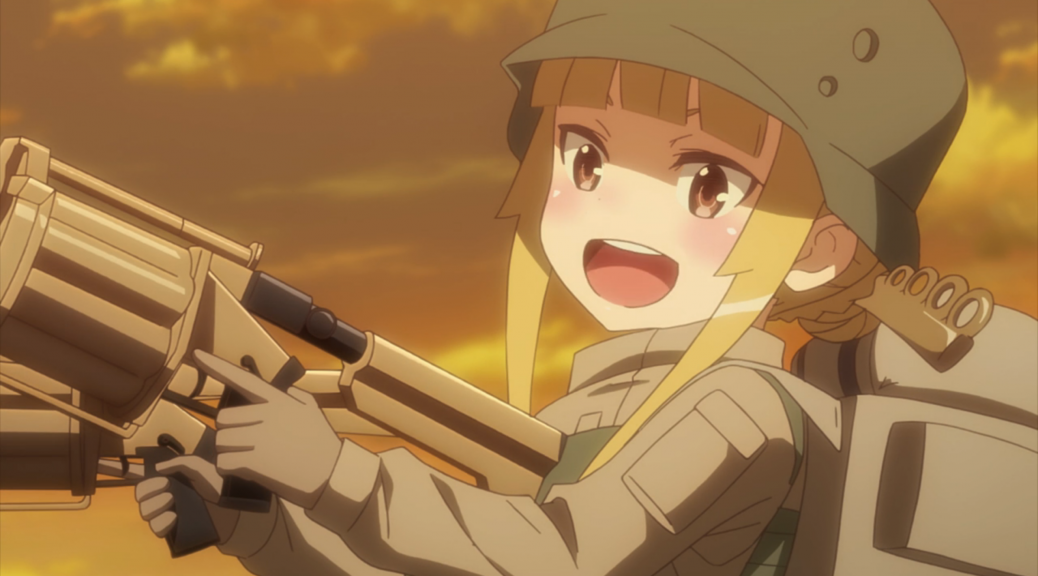 I decided to do a double post again, since not that much happened in episode 7. LLENN’s new partner Fuka is a lot of fun to watch, especially because she’s a different kind of crazy from Pito, but still pretty darn crazy. It’s like level-headed LLENN is just a magnet for crazy people, and this is something she’s just going to have to deal with for the rest of her life. Anyway, despite the fact that the show insists on calling them Team LF (boring), to me they are Team Death By Loli, and I feel good about it.

Earlier in the series I mentioned that I really don’t care about Pito, and that’s still true; I mean, I think her obsession with in-game death is somewhat interesting, but she could drop out of the story tomorrow and I wouldn’t really care. Now I’m trying to figure out if the fact that I don’t care about her is really hurting the story at this point. Technically LLENN is trying to save Pito, so being invested in Pito’s fate would make for a better story, right? But Pito is functioning as an antagonist in the competition, so it’s not like the show is asking me to root for her. 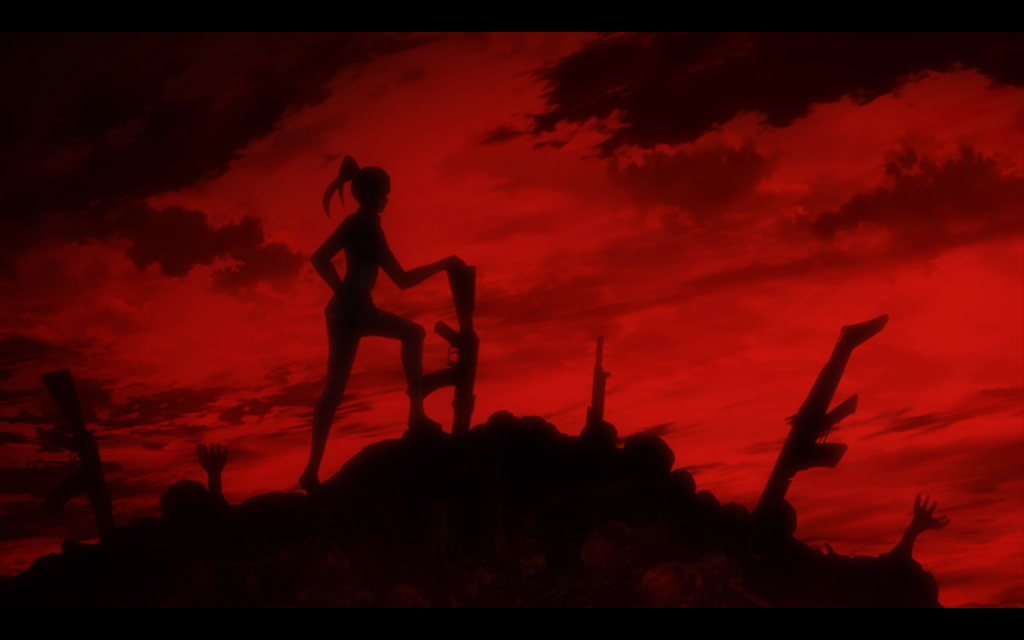 Pito is not a very nice lady, and probably a few fries short of a Happy Meal. Now if only I found her as interesting as the players of GGO seem to.

I want LLENN to succeed in defeating Pito and M in the Squad Jam for Karen’s sake, but considering the fact that Pito and M could jump off a cliff together and I wouldn’t care, it’s hard to feel like a lot is riding on the outcome of this competition. I imagine we’re going to learn something about Pito’s tragic backstory soon that will make us care about her, but I’m not sure I want that to happen; it would be refreshing if she were just a psychopath, straight-up, and that’s all there is to her. Like the show fades into a flashback, and we’re waiting to find out that her father neglected her as a child or something, and then it turns out her past was totally normal and she just really wants to die in a video game for some reason. 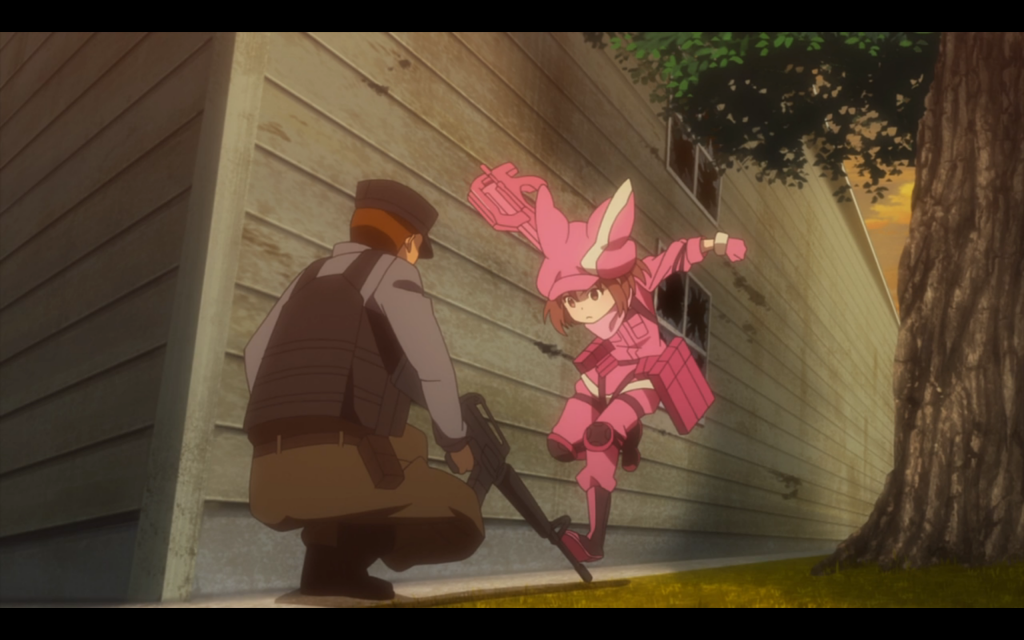 Why do things look insanely cool the more physically implausible they would be in real life? I’m a sucker for the whole landing-on-the –sword/gun move, and it’s really stupid. I can’t help it though, it looks badass.

I do appreciate the fact that we jumped into SJ2 pretty fast with very little messing around beforehand, but as a result, it seems like Fuka had barely any time to get used to playing GGO. She says that she practiced lobbing grenades for hours, but is that really enough time to develop the mastery of the weapon that she has? After all, the people playing in SJ2 are supposed to be the cream of the crop, people who’ve been mastering this game for months, if not years; it seems a little convenient that Fuka got that good that fast. I guess we just have to assume that Miyu is a very talented gamer, no matter what she’s playing. 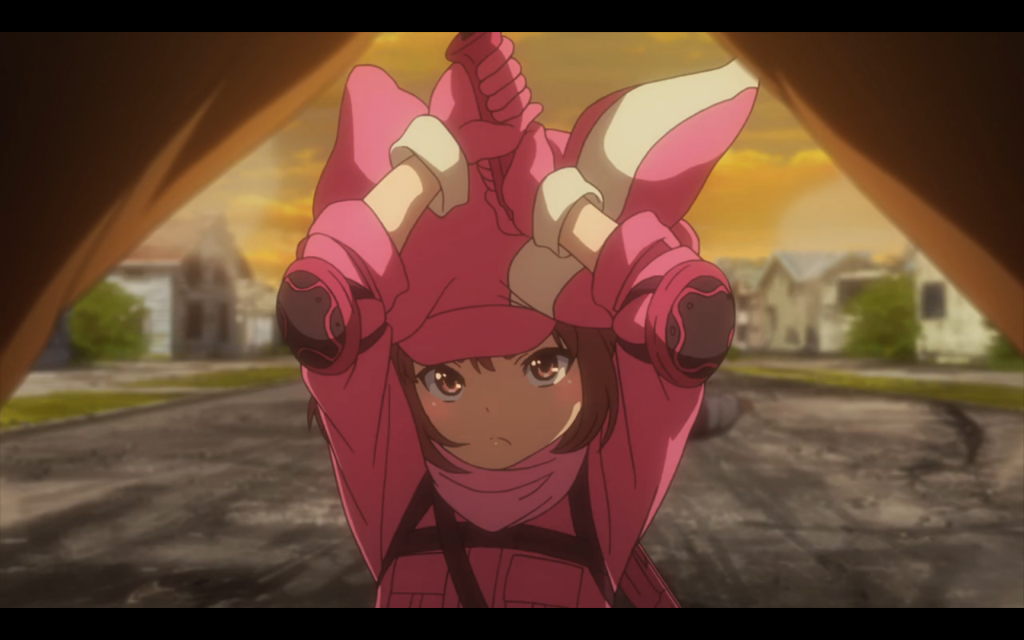 Was it really necessary to go for the crotch-kill, LLENN? I think she’s just showing off for her fangirls at this point.

So now we’re waiting for Pito to slaughter a bunch of foolish opponents; I hope the way she does it is suitably clever, because we’ve been hearing for a while what a good player Pito is supposed to be, but we’ve never really seen it. If it involves using one or more members of her team as a suicide bomber, I’m buying myself ice cream for being smart and seeing it coming.

My level of interest in this show is dropping a little, but it’s still enjoyable enough; it’s just not giving me a whole lot to talk about at the moment. I do hope that sometime before the end of the season, we see the girls’ rhythmic gymnastics team at a tournament or something, and they’re all busy on their laptops playing GGO and totally ignoring whatever they’re supposed to be doing.

“Ladies, what are you doing? it’s time for the synchronized baton-twirling prelims! Get your leotards ready!”

“Shut up Coach, we got sassy bitches to shoot!”

“But girls, we’ve practiced for months for this competition and–”

“Oh FUCK it’s that blonde chick with the twin grenade launchers, everybody hide under the truck!” *Cue Massive Explosion* “Damn You, Death By Loli!”