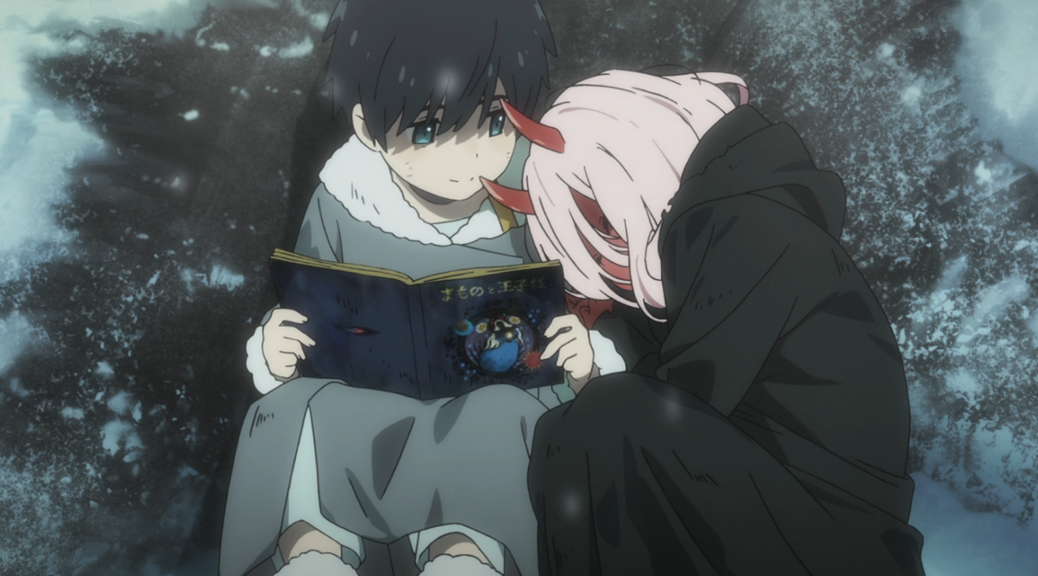 Now that we’re getting into some story reveals, my enthusiasm for this show has dampened somewhat. I’m still enjoying it a lot, but it’s not going quite where I hoped it would go.

The childhood flashback episode was almost very poignant, but was spoiled by being just a little too perfect. I can just about buy that Hiro and 02 met as children and then were forced to forget, since they were both different from the other “specimens” and thus would have been drawn to each other, but the framing device of the storybook was just a little bit much. I guess 02’s nameless caretaker cared about her enough to try to teach her something about her place in the world, but the whole story is just a little too on the nose for my liking.

I think I would have preferred it if Hiro wasn’t her original “Darling”; if Darling was a random parasite hopeful who wasn’t promising enough and was culled from the herd. Then it would be really bittersweet that 02 keeps trying to recreate Darling, because she’s latched onto him as an idea rather than a person. That said, if they’d gone that route, they wouldn’t have had a good explanation for why Hiro is so well-matched to 02 as a pilot; having ingested her blood at a young age, it seems like it acted as a vaccine, so the later trauma of bonding with her was less damaging to him than it was to the other pilots, allowing him to survive it. Still, the whole thing is just wrapped in a neat little bow, which takes away from it. I don’t want this story to be neat: I want it to be messy and visceral.

The most interesting thing to me about the childhood flashback (other than Chibi-02 being painfully adorable of course), was the fact that Hiro’s outgoing personality and inquisitive nature were seen as curious and worrisome to his handlers. Being in that kind of love-free environment wouldn’t be good for any child’s natural development, so it makes sense that the other kids weren’t exactly cheerful and curious. However, the fact that Hiro seems to be the only curious child ANYONE had encountered makes me wonder if they’ve actually been breeding these kids to be compliant. Maybe the whole reason Hiro was a “special” specimen wasn’t anything related to his parasite ability, but the fact that he’s a throwback to a time before children were emotionally stunted.

Speaking of human development, we get something that looks like a fetus inside one of the defeated Klaxosaur cores, so it looks like the Klaxosaurs are a product of human meddling with nature. I kind of hope the story is more complicated than “Man tried to make himself more powerful, only the child of his creation turned on him!” but it looks like that’s where this is going. To be fair, the idea of Klaxosaurs as the nightmare children of humans would fit in well with this whole series theme of sex/conception. 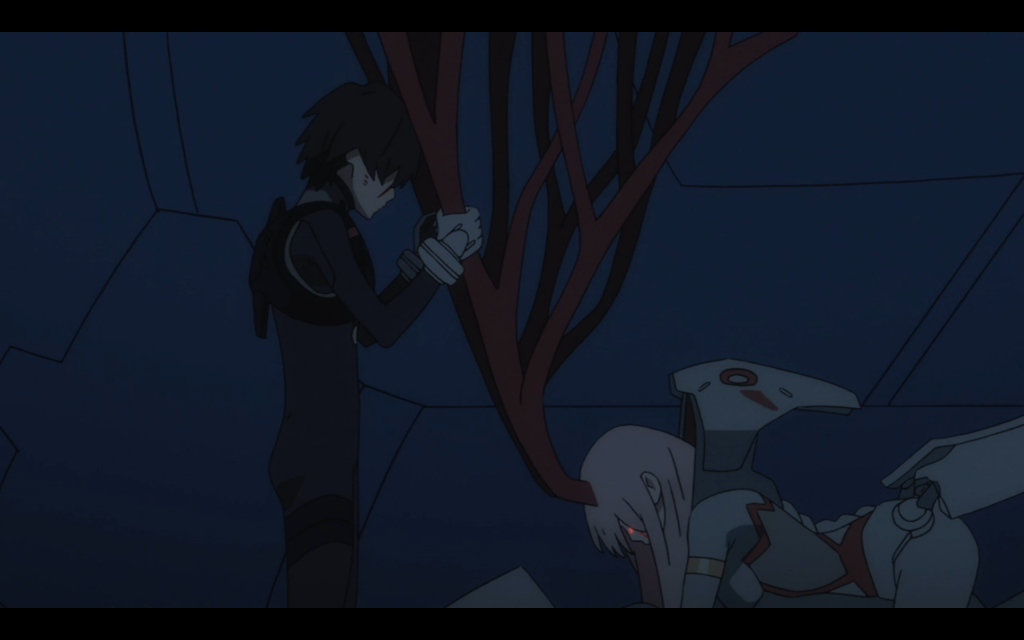 After episode 15, I’m a little confused about what’s going on with Hiro and 02, physically. Let me try to lay this out: Hiro met 02 as a child and ingested her blood, effectively vaccinating himself against her influence, then was brainwashed into forgetting her. 02 was also brainwashed, but less completely, so she still remembered the existence of her “Darling,” but probably not precisely what he looked like. So she keeps hoping every new partner will turn out to be the real Darling, only to be disappointed again and again.

So she acts like Hiro is her real Darling, but deep down, she doubts it, which comes to light when she says that he’s just fodder for her. Then after Strelizia enables the shared flashback, she realizes he is THE Darling and she’s been using him like any other partner. The thing is, even if she knew he was the real Darling, wouldn’t she use him the exact same way?

Then again, when Strelizia fully activates after the two remember their shared past, she looks different; she’s all red, like 02 is no longer fighting her monster nature. So maybe knowing who the pilot is, 02 functions differently, and as a result, is no longer draining the life out of Hiro? Part of me wishes that this had been explained and part of me is just as happy that it’s left vague, since any explanation probably would have been tedious. I think the bottom line is supposed to be, “They love each other, therefore the robot magic works SUPER GOOD now!” and trying to think about it any harder than that is probably a mistake.

The big fight against the gargantuan Klaxosaur was very effective, with the OP song doing a lot of heavy lifting. I know that playing the first OP during a climactic fight scene is an old trick, but it works particularly well here, because Kiss of Death is so well-suited to this show. I think it communicates the feeling of frenzied desperation you would feel if you were fighting for your life; Kiss me now, because we’ll probably be dead tomorrow.

And then there’s the giant baby hand and uh…I’m not sure. Maybe there’s a giant baby Klaxosaur incubating in the ground, and all the little Klaxosaurs are just there to protect it. Maybe the Klaxosaurs started having babies because humans stopped, and if the humans want to beat the Klaxosaurs for good, the answer is not fighting them, but Kokoro’s “Your First Childbirth” book. I think that’s ultimately where this is going, I’m just not sure exactly how.