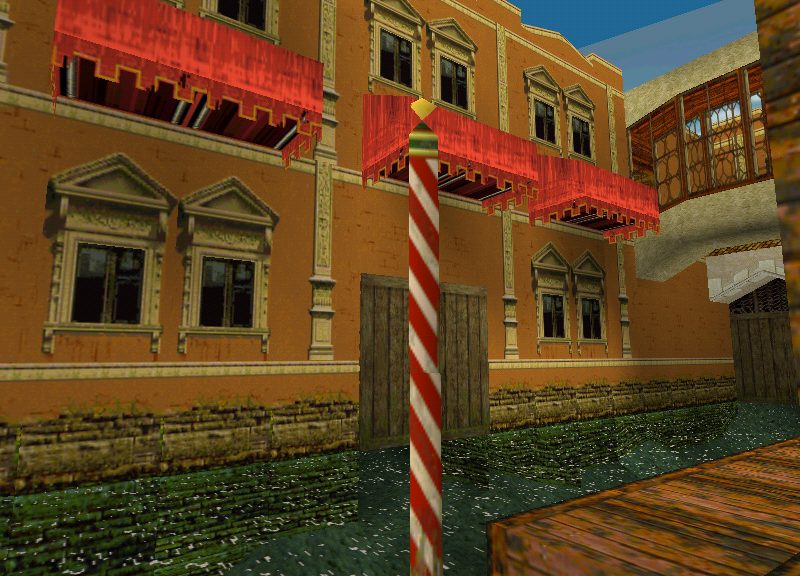 So my last Tomb Raider-related blog post was, uh *checks watch,* seven years ago. Look, you can see this as me being lazy and abandoning a project for too long, or you can see it as me valiantly attempting to combat the view that popular entertainment is disposable by refusing to bow to the quiet tyranny of time; the choice is yours. 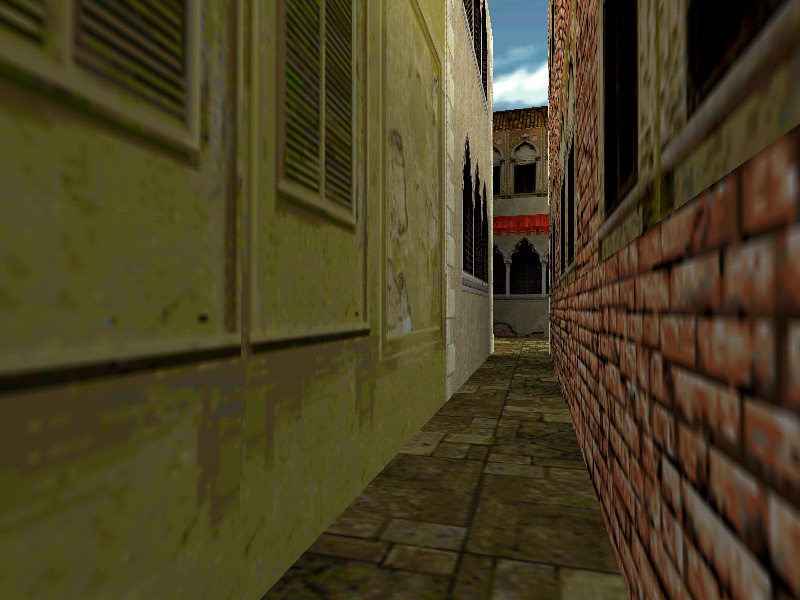 I have a lot of problems with Venice, in fact with this whole Venetian level set, and it makes me feel kind of bad. I know these levels are largely beloved by fans, and I wish I could feel the same. But from the first time I played this level, back in 1998, I found it tedious and frustrating, and I’ve never been able to shake that feeling. Even now, when I have the level mostly memorized and can zip through it pretty fast, I still find it frustrating.

The first problem is that urban environments present practical problems for Tomb Raider, as a franchise. If we’re supposed to be in a city, where are all the people? Well, there are lots of gun-toting Bartoli henchman, but where all the non-packing, non-insane people? Putting in neutral NPCs would probably create as many problems as it would solve, but it still feels weird to be running around a city where no one lives; it’s kind of antithetical to the whole concept of the series, really. The whole set up of Tomb Raider implies that you don’t run into any people, because they all died thousands of years ago; when you’re in a modern city, and there’s still no people, you’re reminded of the artificiality of the situation pretty bluntly.

Yes, in the back of your mind, even in the first game, you always know you’re playing a video game; it’s not like making TRII Venice look more populated would really change that. But I think it’s safe to say that Tomb Raider achieves a higher level of immersion when set in, err, tombs, versus modern environments. Interestingly I think they pulled this off better with the London levels in Tomb Raider III, since in that level set, it felt like it was about 4:30 A.M. there and Lara was exploring mostly abandoned buildings anyway, but I’m getting ahead of myself. 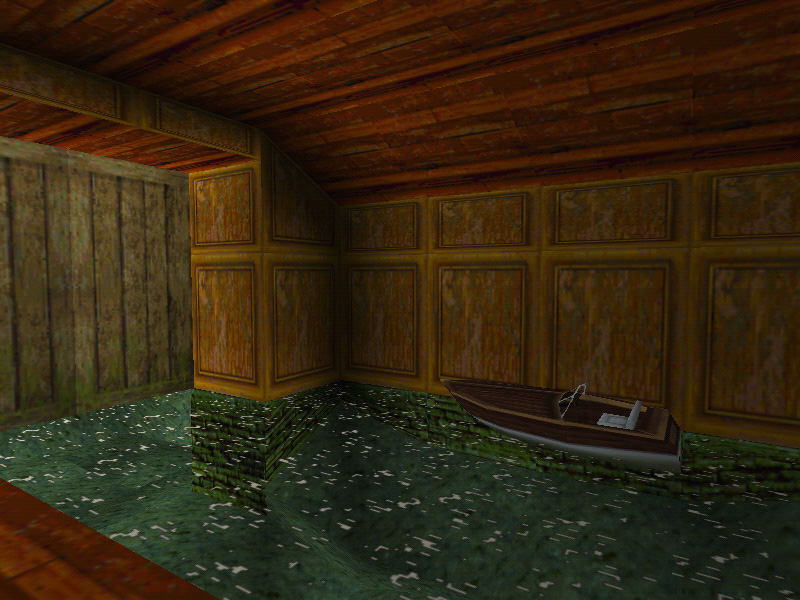 The first vehicle you can ride in all of Tomb Raider and I…don’t like it too much. Maybe this is just me, but I feel like I’m constantly getting on an off the damn thing when I don’t want to, and it happens a lot less with later vehicles.

The second major problem is I think the level’s primary puzzle is a bit too clever for its own good. Maybe I’m just mad that I blew up Lara about a zillion times on the mines trying to clear this level as a teen, but I still think the boat puzzle is too hard to figure out without the aid of a strategy guide. I mean, this is the first TR level in history where they even give you a vehicle, and you’re supposed to figure out a)that you can completely destroy it and b)you can jump out of it at the last second before an explosion? My memory is a little hazy, but I think at the time, I thought you were supposed to improve your speedboat piloting skills to the point where you could navigate between the mines; obviously, this didn’t work out so hot for me. 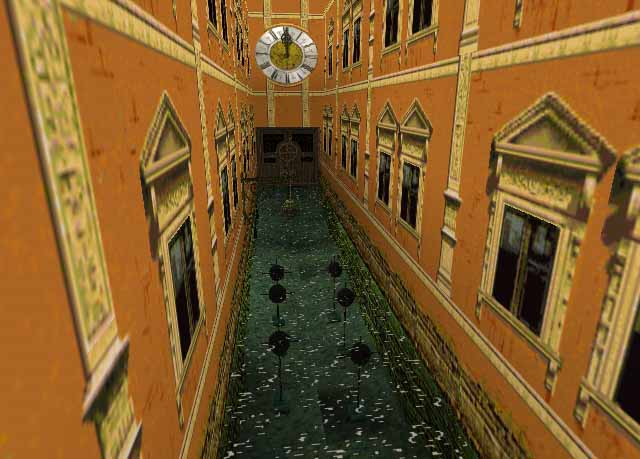 On one hand, I complain that this puzzle is too unintuitive. On the other, I know that if this game were made today, NPCs and in-game prompts would probably give you about 47 hints about what you were supposed to do, and there would be no satisfaction when you solved it. Maybe I’m just never happy?

Eventually I destroyed one boat pretty much by luck, and forgot the second one existed, so I completed the level the wussy-way; swimming through the gate and completely missing the harried boat ride through half the level. Imagine my surprise when I started the next level and Lara was in yet another speedboat.

Is it possible that very few players were stymied by this puzzle, and I was just being dense? I guess it’s possible. Besides, I have to admit, when you do know what you have to do and you succeed with the timed boat challenge– complete with taking your boat to places where boats are definitely not meant to go– it is pretty darn satisfying.

The Joy of Awning Hopping 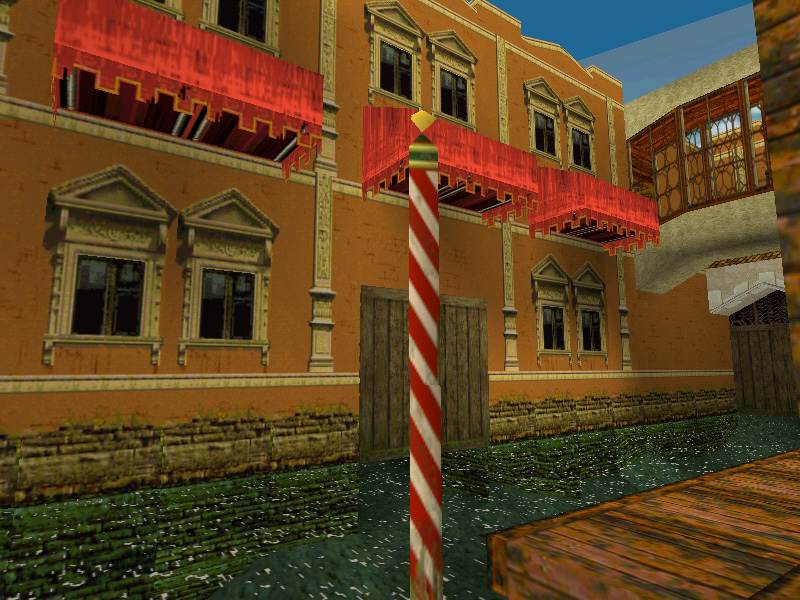 It’s hard for me to see past the negatives with this level, mostly because of bad memories from 20 years ago messing with my perception. However, if I give Venice a fair shake, there are some really nice elements here. Jumping from awning to awning is much more fun than it should be; same with jumping up to the fancy glass windows, shooting them out and then running inside. Somewhere out there, there is custom level that’s all about jumping on awnings and shooting out fancy windows on raised overpasses, and I really need to be playing it right now.

I also like the secret placement; sure, burying two little dragons in the black depths of an underwater catacomb is a little harsh, but if you haven’t figured out by this point in the game that they’ve been handing you buckets of flares for a reason, that’s on you. 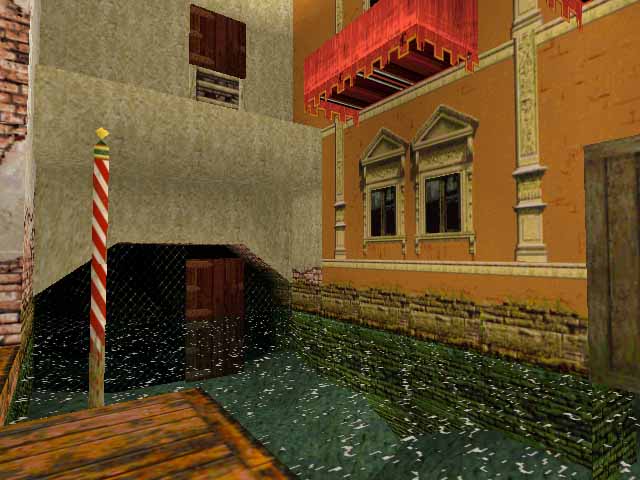 Once you get this mysterious door open, that’s when the fun starts. I can never get enough of scouring dark catacombs for shiny things, especially when there are lots and lots of shiny things.

Have I mentioned that love collecting flares in this game? I feel like they’re the closest thing to money in the game, so my hoarding instinct takes over;  I’m pretty sure I’ve finished the game with 60+ flares in my inventory. It’s like a game-within-a-game to see how well I can get along with stumbling around in complete and total darkness without using the obvious tool. Hey, did you know that in a pinch, you can use your pistols instead? Lara’s pistols illuminate the area around her briefly, so if you fire them like they’re tiny little machine guns, you can almost see where you’re going for a little while there. Sadly, this does not work underwater, which is where you tend to need flares the most, but oh well.

Speaking of the swimming element, it’s cool to be swimming along, pull up on a dock, shoot some henchmen, jump back in the water and get on with your day. In practice I always get Lara shot about twice as often as she needs to and end up getting frustrated, but that doesn’t change the fact that the idea of it is cool.

Is there some kind of theme park attraction where you’re in an entirely floating city, and you can climb up on the dock to buy ice cream or something, but then jump back in the water to swim to the next attraction? Because that sounds like it would be insanely fun. I may have to stop playing Tomb Raider for a bit and petition all my local waterparks to implement this feature.

Best: Hands down, the best part of the level SHOULD be doing the timed boat race, which is really innovative and feels exhilarating when you pull it off, but as you now know, I have a love-hate relationship with that puzzle. So instead, I’m going to say that the best part is the whole sewer-like area you enter after getting the first speedboat; you may burn through flares like mad, but it’s a blast finding all of the hidden items and secrets. Those uzi clips nearly buried in the sand in a dark corner underwater…*chef’s kiss*

Worst: The excessive number of enemies in the first area, especially the one that pops up after you pull the switch in the boathouse. We’re just getting used to fighting human enemies in TR2, and you throw like five of these bozos at us? Plus mean dogs? No thank you.

This is my honest opinion; please don’t hurt me.

Coming Next: Bartoli’s Hideout, where I’m going to try to put aside all my issues with Venice as a whole and just play the damned level.