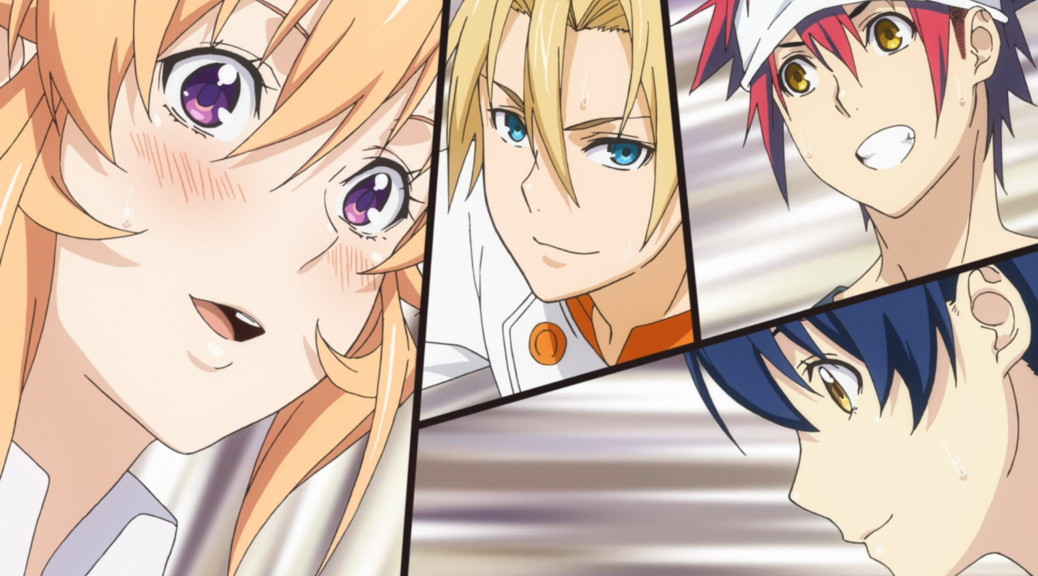 After last week’s barnstormer of an episode, this one was a much more quiet affair, focusing on the kids developing the teamwork they need to win a Team Shokugeki. After a whole show full of arrogant young cooks insisting that their food is the best, it was kind of nice to see the kids pointing at each other and saying “You made the best dish,” “No, YOU did!” and really meaning it. That’s probably too much growth for them to demonstrate just based on one mock battle, but what can I say; Erina’s Grandpa is just that good. 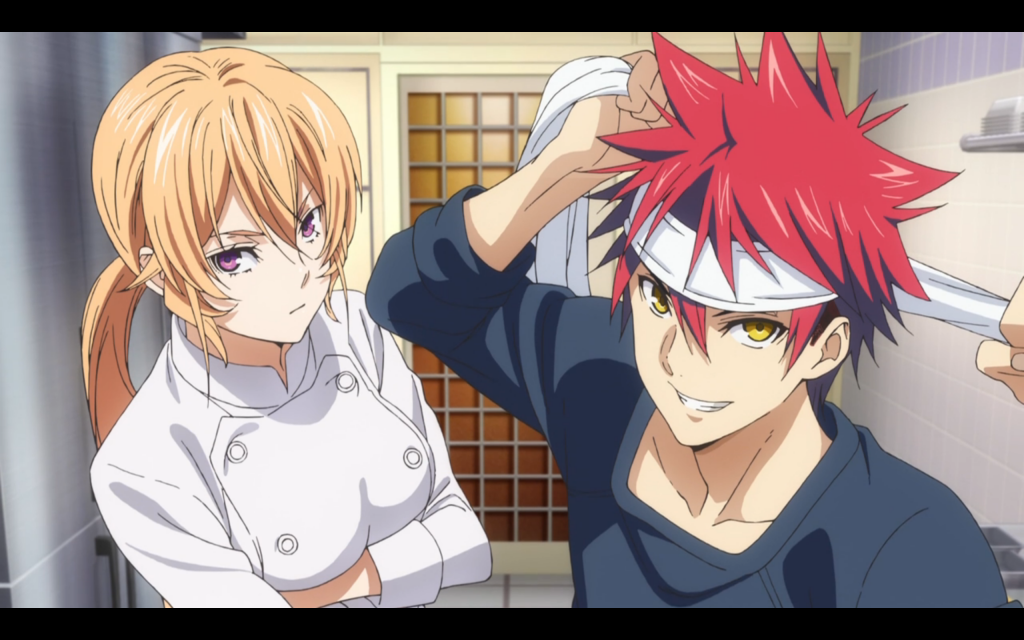 They look so good together…but wait, I want Soma and Megumi together, right? I need to close my eyes and think of Megumi.

Something’s been bugging me about the dish of the week though. Apparently, the three main components of Hachis Parmentier are spiced ground meat, creamy mashed potatoes, and baked cheese. Um…how do you go wrong with that exactly? You’d almost have to be trying to screw that up. Soma even throws sardines in it, for some reason, and still doesn’t manage to ruin it. 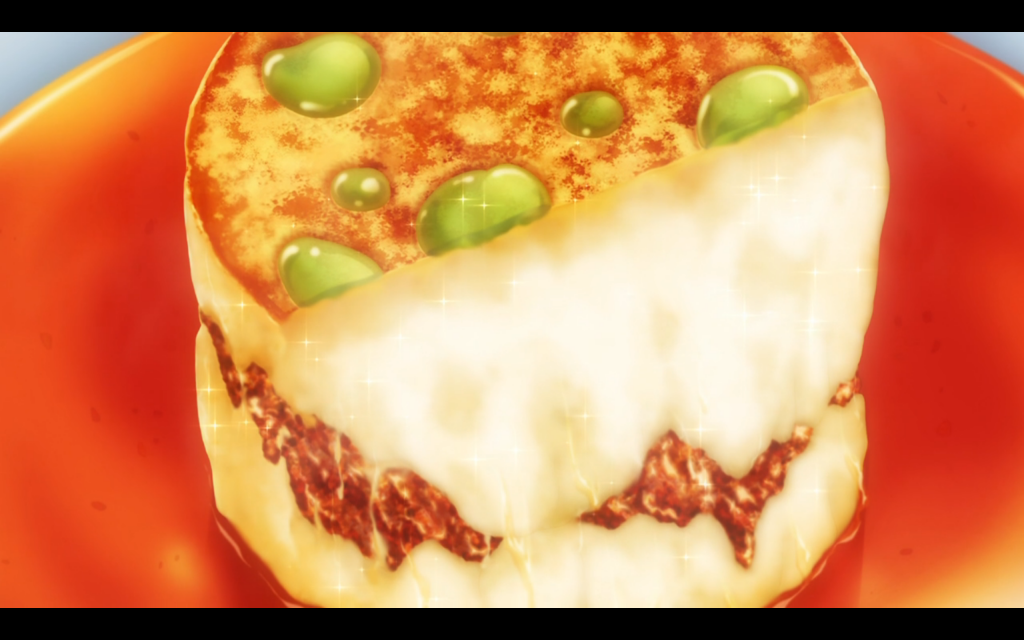 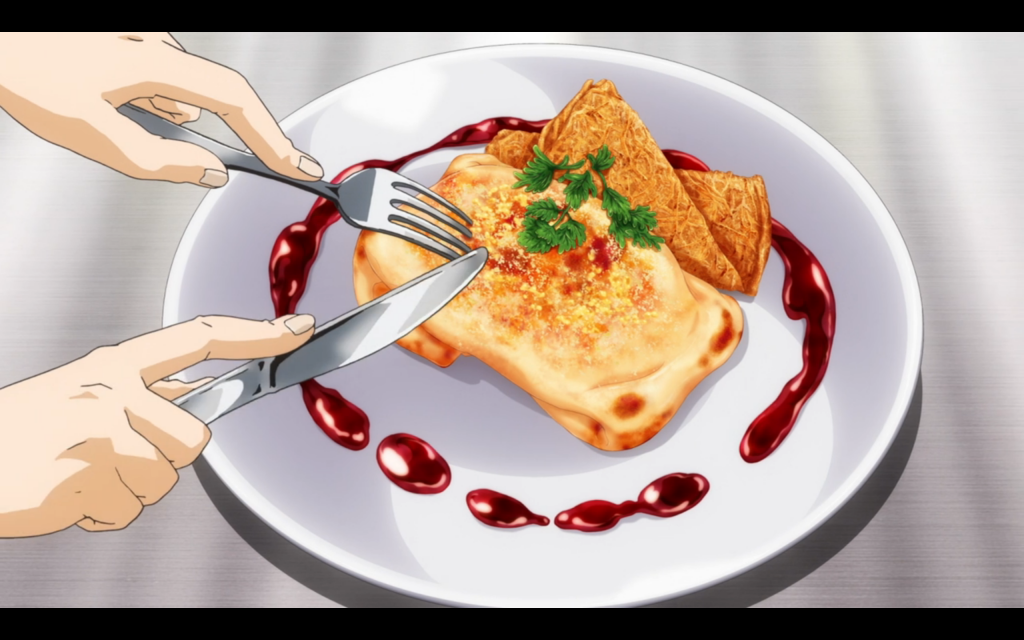 There’s also a good bit here about Erina learning to improvise for the first time, which is pretty amazing if you think about it. She’s devoted her entire life to cooking, yet because of her rigid upbringing, she’s never just experimented in the kitchen; everything she has ever made has been either from a recipe, or so premeditated that it may as well have been. It’s like there are no limits to the sadness that is Erina’s life. 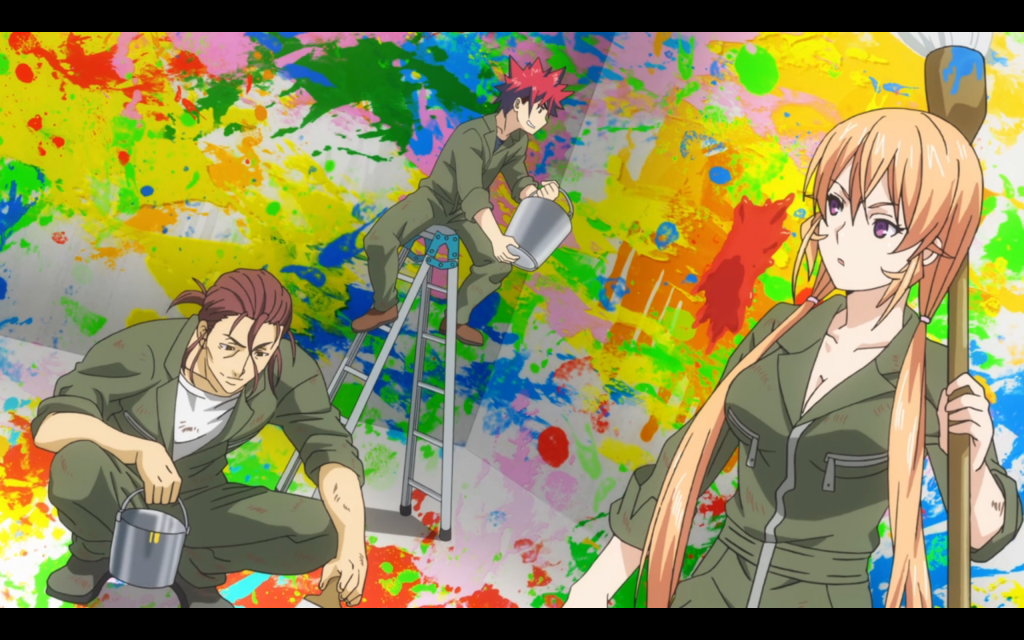 After the Mock Battle which was really more of a Mock Cookout of Respect and Friendship, the rebels and Azami’s faction meet for a Shokugei Rules Powow. Everybody can use as many team members as they want, but it seems like they can only choose from enrolled Totsuki members, so the rebels don’t have the option of getting help from their expelled friends. I think Gin and Soma’s Dad are also competing in this battle, which seems odd, but I’ll wait to see how that plays out.

Azami tries to claim that Erina has to compete on his side since, as one of the Elite 10, she is technically part of Central. To be fair to Azami, I don’t think he actually expected her to give into that, because he doesn’t seem remotely surprised when she tells him to go shove it. Erina gives up her rank so she has no ties to the Elite 10 or Central, which would be a powerful gesture…if she weren’t already internationally known as the God Tongue. They actually need her more than she needs them, but it is a strong moment for her asserting her independence against her domineering Dad, and I don’t want to nitpick too much. 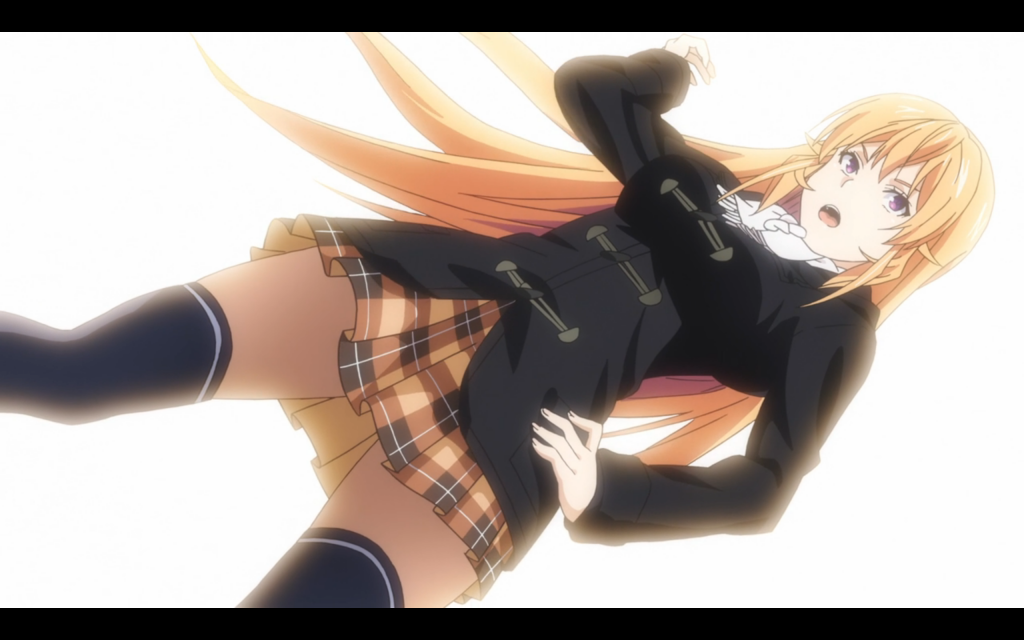 The Food Goddess That Shouted “I” At The Top of Hokkaido

Then Erina agrees to do whatever her Dad tells her for the rest of her life if her team loses, and uh, what? I feel like someone should have stepped in there and said “Waitaminute Erina, think about this, you don’t have to promise him that!” then again Saiba has already agreed to basically become Azami’s love slave if he loses, so I guess we’re just at the level of ridiculous stakes now. I’m wondering if Saiba’s gambit is to lose, but in the process of the match, warm Azami’s frozen heart so much that he becomes a good person and doesn’t enact these ridiculous punishments. I mean, that would be lame as hell, but maybe more sensible than Saiba being just that sure that he’ll win.

I know I’m back on the Rindou-obsession train, but most of the interesting stuff in this episode had to do with her. Not only does she do a great job of dressing down Eizan while pretending to defend him, but she specifically says goodbye to Soma at the Rules Powow, and no one else. I wasn’t really serious that time I said she could be Soma’s sister, but now I’m beginning to wonder…that red hair/yellow eyes combination isn’t common, even in AnimeLand. Do we know anything about Soma’s Mom? I honestly don’t remember if we ever learned about her during the previous seasons.

Okay, so this episode may have killed the momentum a little bit, but I’m still looking forward to the Team Shokugeki. I have a sneaking suspicion that next episode is going to be filler, but hopefully I’ll be wrong, and they’ll be starting the competition before the opening credits. And maybe Rindou will cook something, and then I can have a pony.