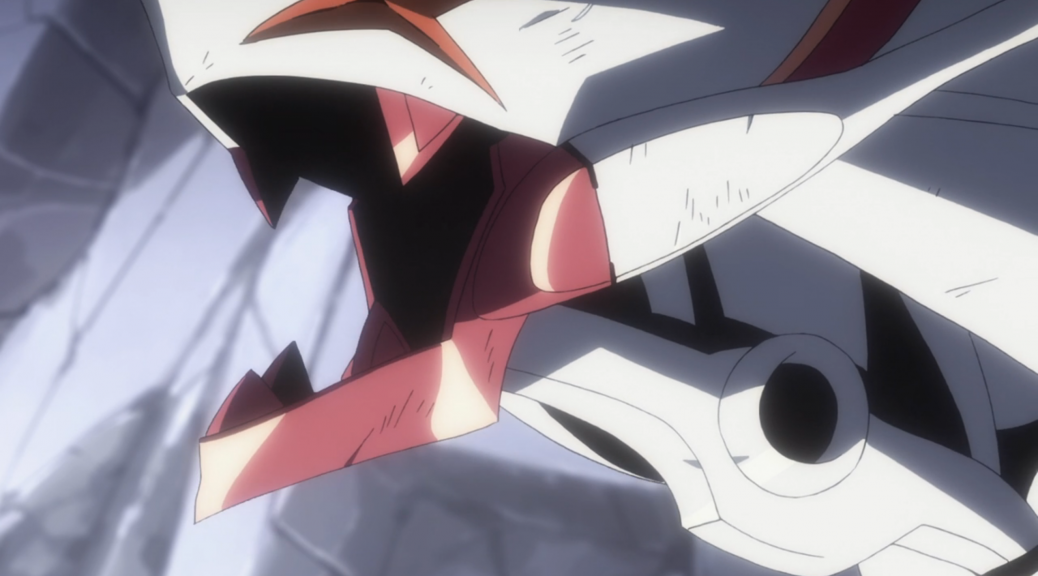 Five more episodes of FRANXX, and I’m becoming increasingly confident in my initial appraisal of the show; These themes are the real deal, and Trigger isn’t just throwing around all this sexual symbolism just to be salacious. It’s also opening up to be less about sex specifically (although that’s still very important to the show), but more about any kind of sensual, animalistic behaviors that mark humans as part of nature, and what it means when we start getting away from that.

The one thing I’m not sure I like is all the emphasis on Ichigo’s unrequited love for Hiro. There’s nothing wrong with it in general, but I feel like we’re kind of being knocked over the head with it, when it’s been pretty obvious what the dynamic is between these two from the very beginning. That said, there’s probably a reason why heartsick Ichigo is getting so much attention, so I’m going to suspend judgment until I know what that is.

Episode 6: This was actually the most typical episode, in the sense that it felt like watching Evangelion, or Gurren Lagann, or insert-popular-mecha-show here. Hiro’s miraculous recovery, spurred on by his desire to protect 02,  was predictable, but I don’t think I would’ve wanted them to do it any other way; sometimes, we use tropes because they work. This probably would have been a more powerful episode if I hadn’t already seen these things done in other mecha shows, but it was still effective.

Now I’m wondering what Hiro’s status is; having survived the three-times curse with 02, is he part-Klaxosaur now like she is? Or is there something else going on entirely? Meanwhile, the characters response to Hiro’s survival– “Oh, looks like that thing about stamens dying when they ride with 02 was just a rumor–” is a little strange. Has it occurred to any of the kids that 02 actually has killed multiple partners, and Hiro was just the first one who survived? Maybe it’s just denial; now that she’s on their team, they don’t want to believe that she is a partner-killer, even if all evidence points to it being true. 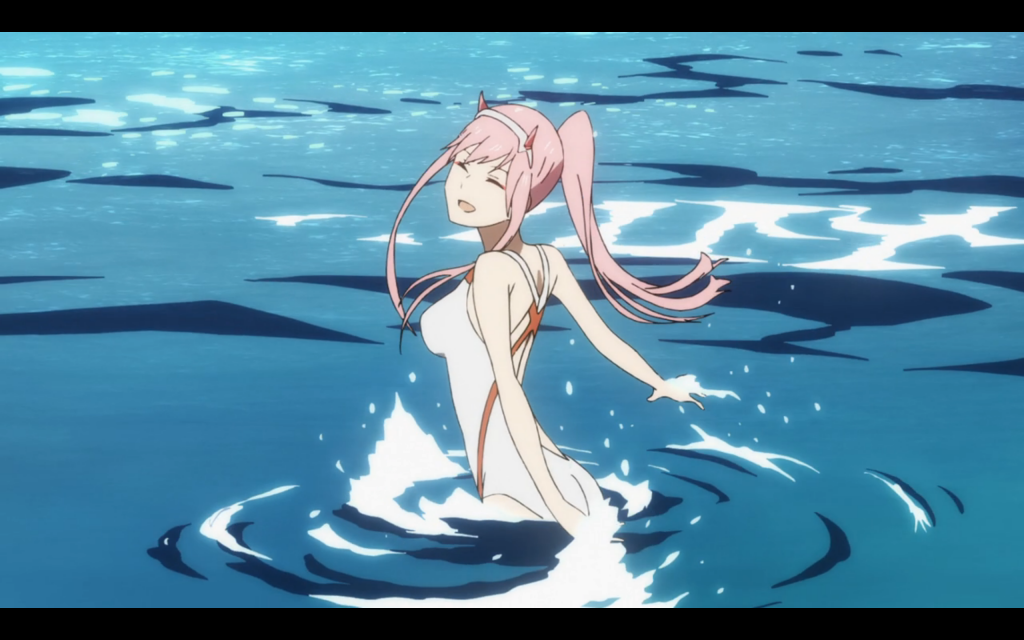 I am not gay for 02; I am a straight woman. I just want to collect screenshots of her and draw fanart and think about her all day long, okay? Please respect this distinction. Seriously, major credit to Haruka Tomatsu for doing such a great job with her lines; I didn’t even realize that she also played Asuna from SAO until I looked it up. That’s some impressive separation.

Episode 7— You know it’s a good show when even the beach episode is about 50% devoted to world-building. I was expecting to turn my brain off for this episode and wait for normal plot-services to resume next episode, but there was a lot going on here; not only in terms of what the kids discovered, but why they discovered it. I’ve been wondering what kind of an authority figure Papa is, and the first couple of episodes painted an ominous picture. However, the fact that it was Papa who sent the kids to the beach, knowing they would fall over the ruins of a town and learn something about their world, is intriguing.

It seems like he does want the kids to learn and grow beyond their role as human weapons, but is he alone in that? Maybe he had to sneak in the beach vacation because the people in charge won’t let him educate the children directly; or, maybe he has some sinister purpose in mind, and he’s picking a really round-a-bout way to go about it.

One moment that kind of kicked me in the teeth was when Kokoro finds the FRANXX version of What to Expect When You’re Expecting in the ruined town. The kids in FRANXX have no concept of sex and childbirth; what would it feel like to find out about that all at once? It’s hard enough to process even when you have years to absorb that information.

Which reminds me; of the critics who have had strongly negative things to say about this show, how many of them are parents? I’m guessing not many. Lord knows, I don’t want to make this some kind of perverse gatekeeping thing (“you can only understand this show if you TOO have borne a child!”), but I think it probably makes a difference in how certain writing choices affect you. If you saw Kokoro pick up that book and you didn’t feel anything, then it’s almost like we’re watching two different shows. 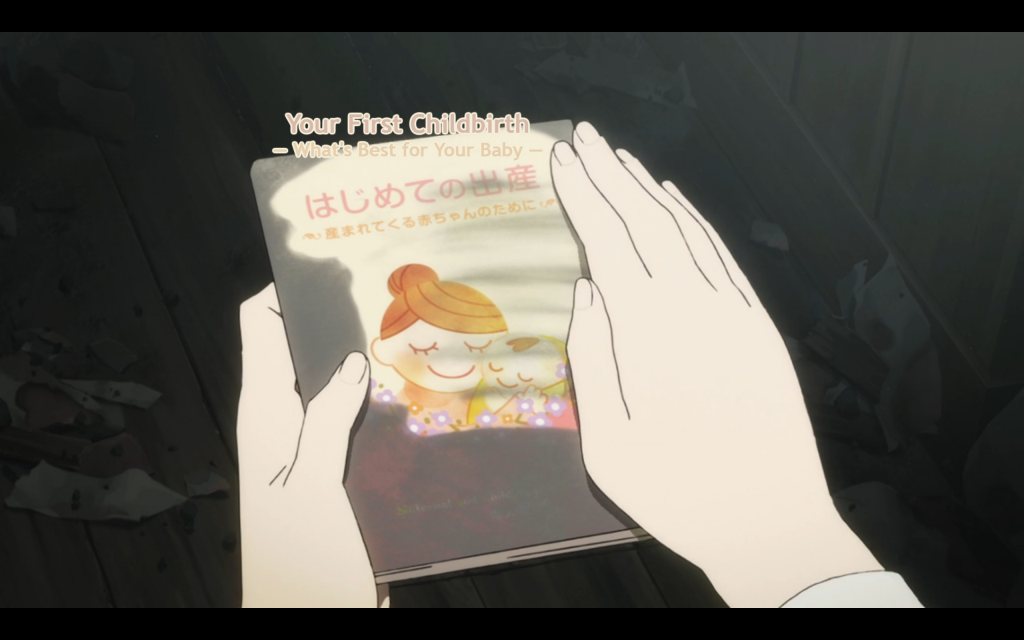 Episode 8— This is the kind of episode that typically annoys me, but FRANXX threaded the needle here somehow and kept it from being too obnoxious. I tend to get annoyed when kids in these life-or-death situations start acting like spoiled suburban children, but the fact that the kids actually realized how immature they were being by the end of the story made it work. Plus, it’s been made pretty clear at this point that these kinds of childish antics are what set Squad 13 apart from all the other squads, and possibly, everyone else in the known world. They’re being allowed to be childish and emotional, and I wonder how this ties back to Papa’s master plan.

We know that Squad 13 is a test case for something. Is Papa using Squad 13 to model the way humans used to interact, in the hopes that the rest of society could go back to the way it used to be in pre-Klaxosaur times? More on this later.

I remember some outrage online around the time this episode aired because of Hiro’s comments that the boys control the robots, but it’s the girls with their “frail bodies,” who take the brunt of the punishment. I can obviously see why this seems sexist, but if you’re like me and see the piloting of FRANXX not just as a metaphor for sex, but for conception (and possibly the entire heterosexual cycle), it makes a lot of sense. Stating that women’s bodies bear the brunt of the punishment during pregnancy is hardly controversial, and I think Hiro’s comment was meant to parallel how men and women function in reproduction, not just sexual intercourse.

I wonder about the conclusion the kids draw that the previous Squad 13 died in battle; that may not be correct. This show has been hinting pretty strongly that parasites don’t live to become adults, so maybe the previous squad kids aged out of peak piloting age and were unceremoniously murdered.  If that’s the kind of world these kids are living in, the threat from the Klaxosaurs seems rather unimportant in comparison.

I’m writing too much about this episode, but I also have to acknowledge the scene where 02 taunts Hiro with the kids’ underwear and runs away; her joy is infectious, and it’s scenes like that which elevate this show from episode premises like “Monster goop makes the girls’ clothes evaporate.” Even though she’s not really human, so far only 02 seems to understand what the people of this world have lost by putting aside their humanity.

Episode 9— I was distracted during this episode by the fact that I couldn’t get the part of Eva where Shinji is trapped inside Unit 01 out of my mind, and I was wondering how much of that is my fault. FRANXX obviously takes inspiration from Eva, and from Gurren Lagann (especially considering that some of the same people worked on those shows), but that’s normal; earlier shows inspire later shows, and certain things become codified as tropes of the genre. Yet, even though I know that the tropes that FRANXX is using have become general mecha tropes, not tied to any one series, I can’t stop comparing it to Evangelion specifically. I wonder if the creators of this show would be annoyed by that, or if that’s what they’re going for?

I like Goro as a character, and I appreciate his (doomed) love for Ichigo, but I’m not quite sure what to make of this episode. If the big takeaway was that the kids learned that their leadership was willing to sacrifice one of them very easily, then err…they really should have known that already. Otherwise, they haven’t been paying attention at all.

Episode 10— Oh boy. We see the society that the kids have been protecting, and you have to wonder: Why bother? Let the Klaxosaurs have it, everybody can just lay down and die.

This episode made me more confident in the idea that Papa is trying to use Squad 13 not just to protect humanity, but to change it, however I’m a little confused about Zorome’s role in this episode. There are hints that the older woman he meets is actually his birth mother, but how contrived would that be, even by anime standards? Besides, I kind of figured that with the technology they have in FRANXX, they’ve been growing the parasites in artificial wombs anyway. Maybe they do need women to give birth to children, and then in return the mothers get a free pleasure-center-stimulating machine?

This episode made it clear that the children are believed to be infected with something; whether this is some bacteria that allows them to interact with the FRANXX, or it’s a mislead for something more basic (like the fact that they haven’t been sterilized) remains to be seen. I think I’d prefer it better if the “infected” children were seen as dirty simply because their biological functions haven’t been replaced by technology yet.

So now we’re in Brave New World territory, which comes as something of a surprise to me even though it really shouldn’t. I’m torn between wanting to find out more about how dystopian adult society works in this world, and never wanting to see it again because it’s too goddamn depressing. I think 02 has the right idea; stay as far away from the adults as possible.

Hopefully I’ll be able to watch 11-15 and get my thoughts on them down pretty soon, and then I’ll almost be caught up to the outrage du jour! Exciting!