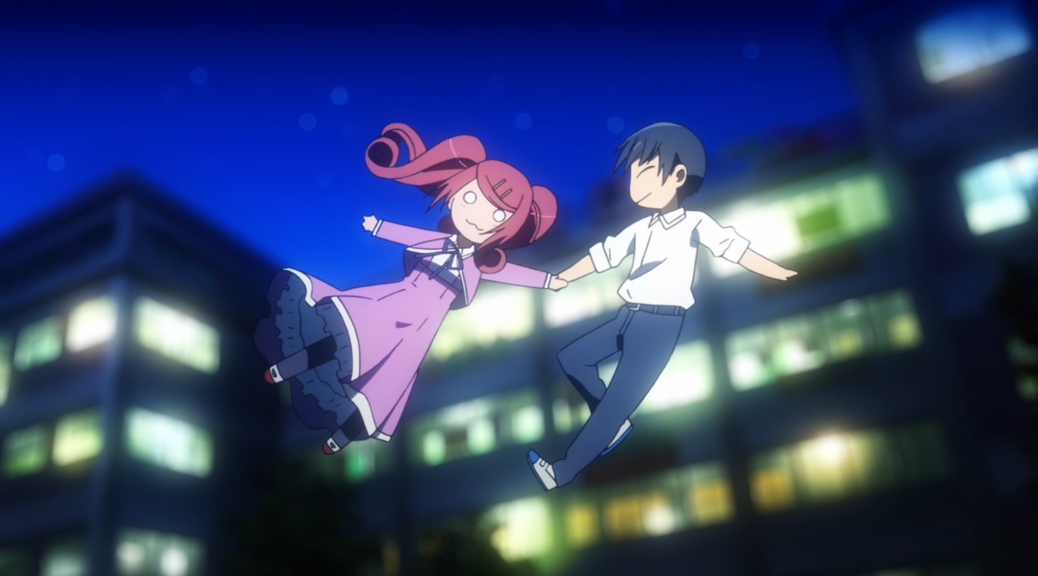 This episode left me scratching my head. This supernatural route definitely isn’t where I expected this show to go, and I’m not sure yet if I like it or not.  I said I wanted Mato-chan-sensei to get her own story, and  we’re getting that (since it looks like next week’s episode will cover some of her backstory), but…did I want ghosts? Who ordered ghosts?

On the other hand, this does put all the quasi-magical dreams they’ve been doing this season into proper context. The focus on dreams seemed to come out of nowhere at first, but it makes a lot more sense knowing that the show was veering in a more magical direction all along.

Oh, and before we go any further, PIKARI TROLL FACE! 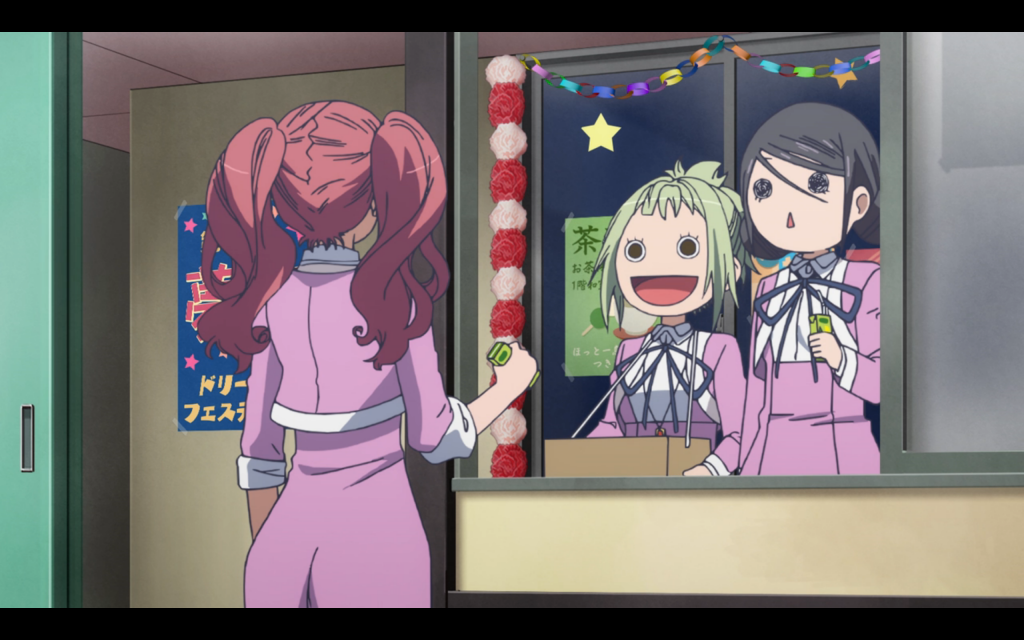 Since this episode didn’t feature Pikari and Teko very much, my choices in troll face screenshots were limited; I hope this one meets with your approval.

We’re having a school festival episode, which means everyone’s doing projects with huge amounts of construction paper and posterboard and it looks kind of wasteful; I always wonder with school festival episodes if all that stuff gets recycled afterward, or if it gets thrown out. Ai, one of the twins who fills out the ranks of the diving club, nearly gets abducted by a ghost who only shows up at special school events. Mato-chan sensei is on guard against this, however, since apparently she’s unusually attuned to the supernatural and can sense the presence of ghosts. Or maybe she keeps her head around ghosts, while other people get fuzzy and confused, I’m not sure; it’s not clear what her supernatural attunement entails. 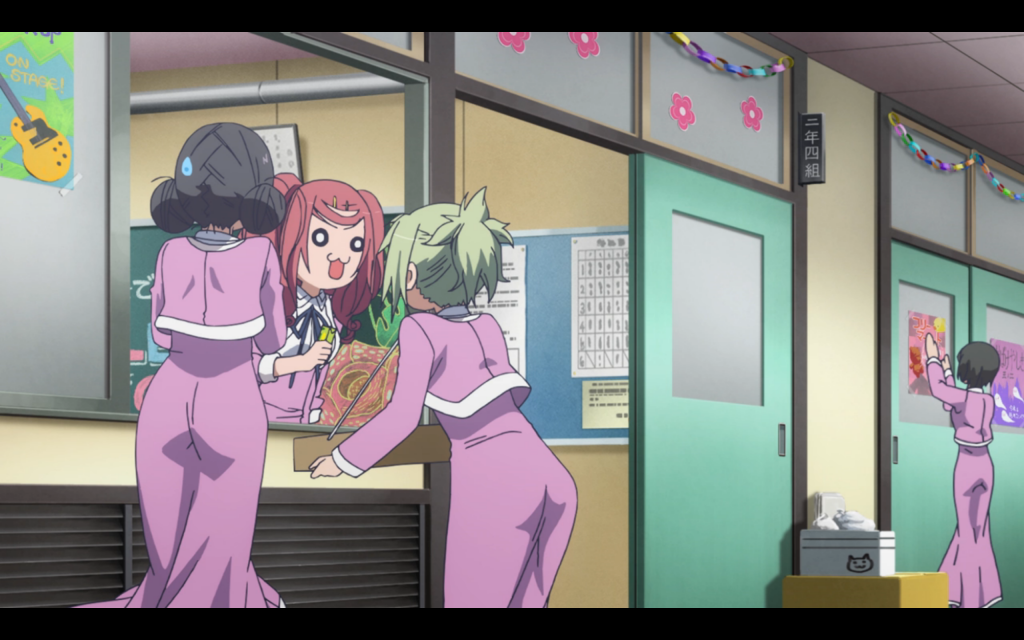 Find something you love to do as much as the artists on this show love drawing butts; you will never work a day in your life. I noticed the butt-emphasis way back at the beginning of season one, but it’s REALLY noticeable in this episode.

The sequences of “Peter” trying to abduct Ai are beautifully done, and there is some satisfaction here in crossing over from the realm of nebulous magical realism to proper supernatural hijinks; I just can’t decide if this really fits with the rest of the show or not. Amanchu is very much about adolescence, so the idea of people wanting to freeze themselves in time during their adolescence (or get lost in it perhaps), is very apt. However, this is also a show about scuba diving, and some cynical part of me feels like the supernatural elements have only been introduced to give the girls something interesting to do when they’re not underwater. And it might be trying to shove a square peg into a round hole. 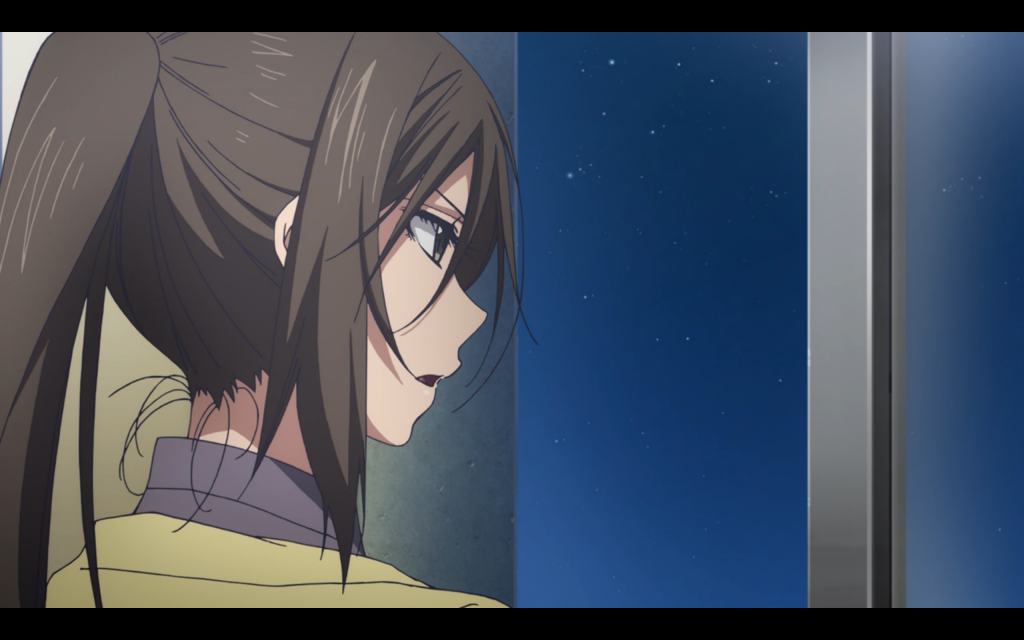 “I’ve been woefully underdeveloped, but did you know that I can see ghosts?” “Oh…I thought your backstory was going to be about what made you so passionate about scuba diving, or–” “No. GHOSTS.”

For now, I’m going to try to keep an open mind and see how this story resolves before I decide whether or not I like this direction. I’m not sold on this ghost stuff being territory Amanchu needed to investigate, but Amanchu doesn’t really need to do anything, does it? Hmmph, I’m confused now. Hopefully I’ll have a better handle on what I actually want from this show after next week’s episode.