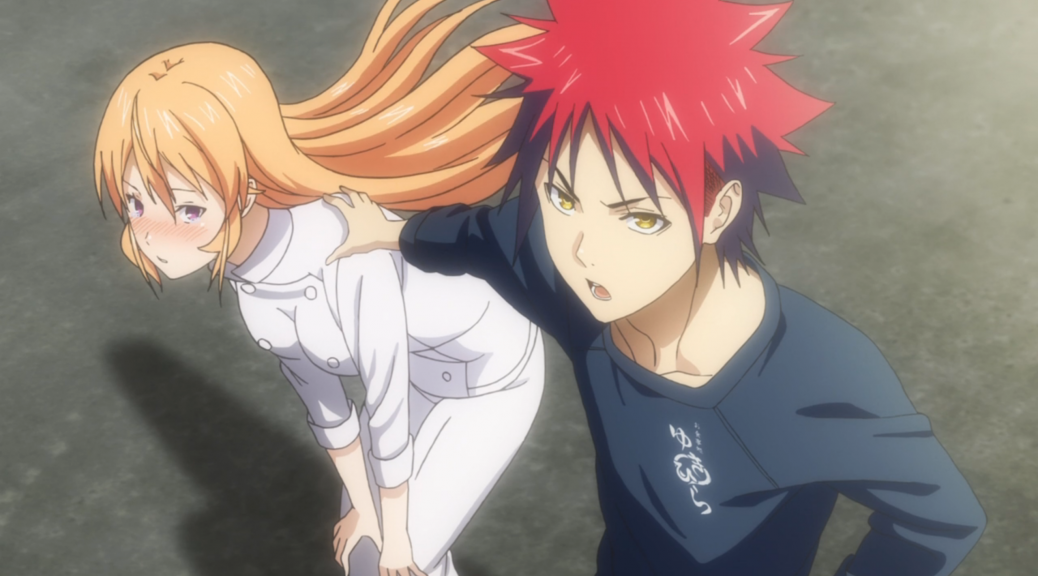 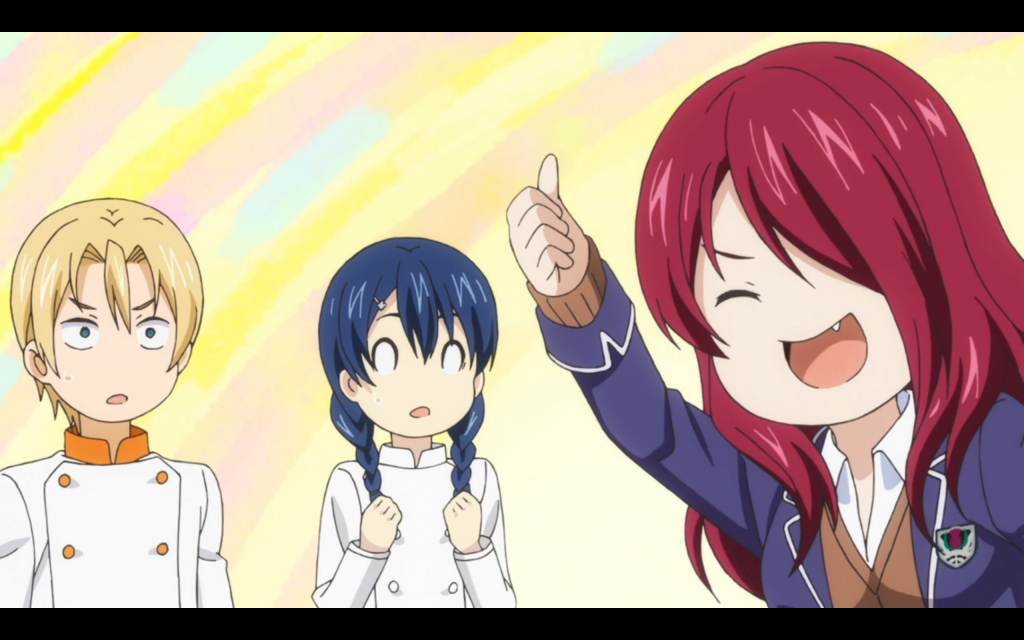 Another Open Letter to J.C. Staff:

YOU KNOW WHAT YOU DID.

Now that JC Staff has betrayed me yet again, they are forever dead to me and I hope they’re reduced to making sequels to Taboo Tattoo for the rest of their miserable existence, this was a pretty darn stellar episode. Finally, the anti-Azami plans that have been in the works for some time come to light, beloved characters return, and there’s  one hell of a cooking battle on the horizon. I don’t know how this show did it, since I’ve been complaining all along that Azami’s evil plans are actually pretty stupid, almost to the point of being immersion-breaking, yet somehow, the political drama remains fun and exciting. Backdoor plotting with Erina Grandpa! Rindou the true neutral! Megumi on the warpath! Yukihira diner is ON THE LINE! Man, what an episode. 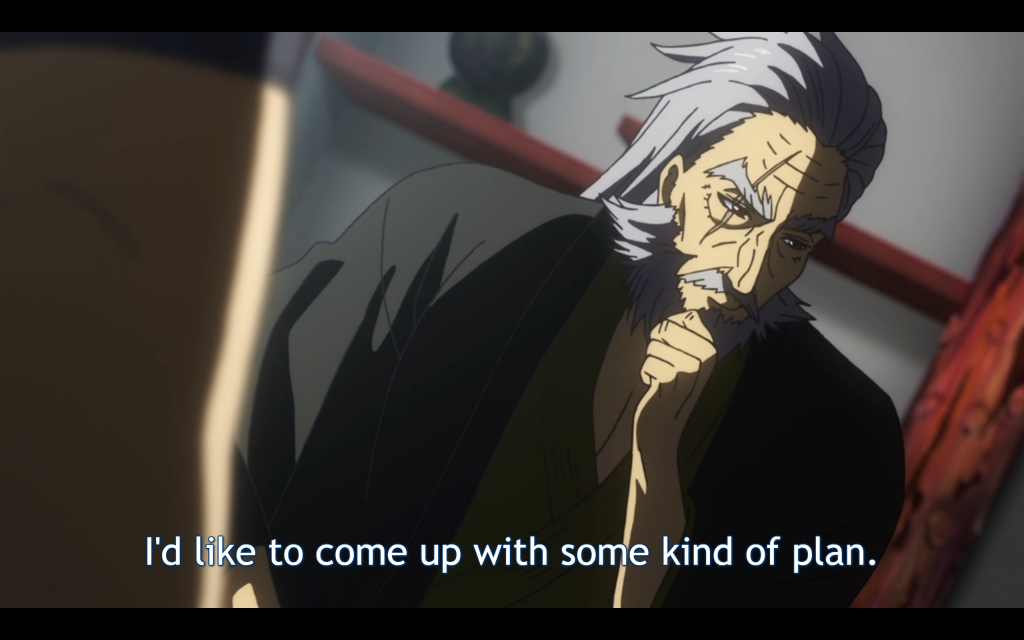 Okay, before we get into the plot here, I have a question: For those of you keeping up with the manga, do they ever reveal what Rindou’s specialty is? I get that it’s become an ongoing joke at this point that we never get to see her cook, and I think I’ve written enough strongly-worded letters on the subject, but I’m still really curious. I don’t want anyone to spoil me on what her specialty is, just if she’s ever been given one. 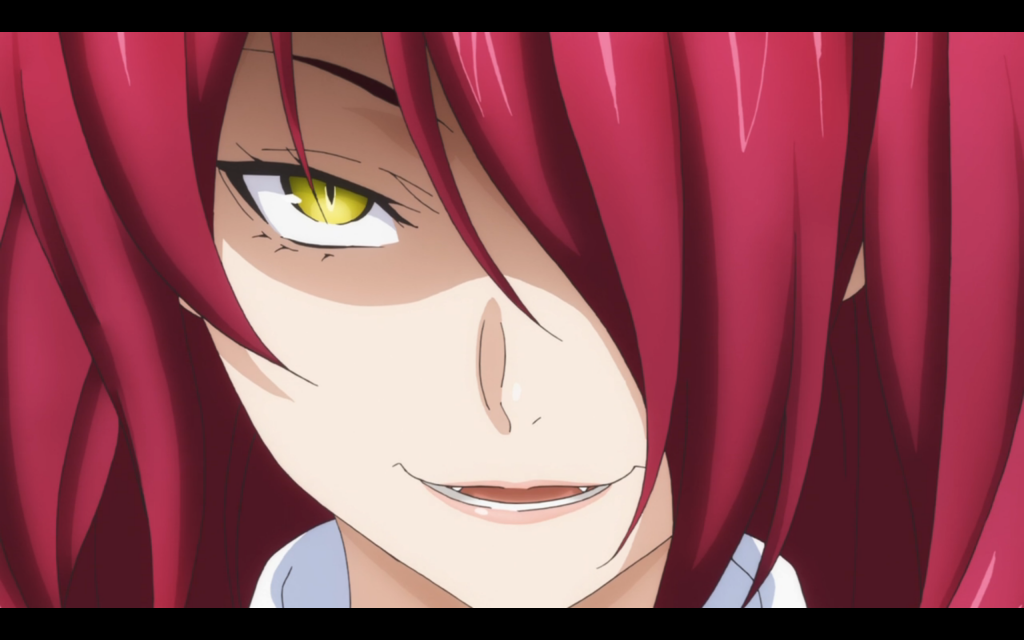 From this moment on, I will stop being so obsessed with Rindou on this blog. I will not cease worshipping her as a God, but I’ll do that on my own time.

Okay, so either because she’s secretly on the good guys’ side, or because she just lives for any excuse to throw a monkey wrench in people’s best-laid plans, Rindou gives Megumi and Takumi an easy pass to the next round. We’re left with four unexpelled rebel freshman: Soma, Erina, Megumi, and Takumi. The first three are kind of a given, but I find Takumi’s inclusion interesting; it could have been anyone in that fourth spot, and I’m wondering what Takumi brings to the table (quite literally) that places him here instead of someone like Alice or Ryo.

Soma, with his typical “The enemy gate is DOWN” approach to problem solving, decides that their only recourse is to fight for seats in the Elite 10, because once they have a majority on the school’s obscenely powerful student body, they’ll be able to rescind everyone’s expulsions. One thing I only noticed upon rewatch is that Soma’s math is wrong; even if Soma, Megumi and Takumi all win spots on the Elite 10, they’ll still only have a coalition of four (including Erina). That’s not enough for a majority. Soma seems to think they’re going to get a fifth competitor from somewhere, but how are they going to do that if everyone else is expelled? It’s possible I’m missing some aspect of the plan here, and it’ll be better explained later.

Erina has a better idea, or what would be a better idea if her father wasn’t such an unmitigated jerk. She tearfully asks Azami to reverse the expulsions, hoping that his feelings for her as his daughter will force him to listen to reason. Of course, since Azami is incapable of feeling human emotion, this gets her nowhere. It’s a pretty big deal for Erina to swallow her pride and outright ask her father for anything, but considering how fast Erina has been changing this season, it feels like a natural progression.

Soma, who is still stuck on “Whatever strategy is left to you, no matter how unrealistic, must be your plan” tries to challenge Azami to a cooking Battle Royale, but to no avail; Azami has nothing to gain by accepting challenges from anybody, and he knows it. Just when all hope seems lost, Soma’s Dad returns! And Erina’s Grandpa! And Jesus! Well, maybe not Jesus, but the effect is about the same. 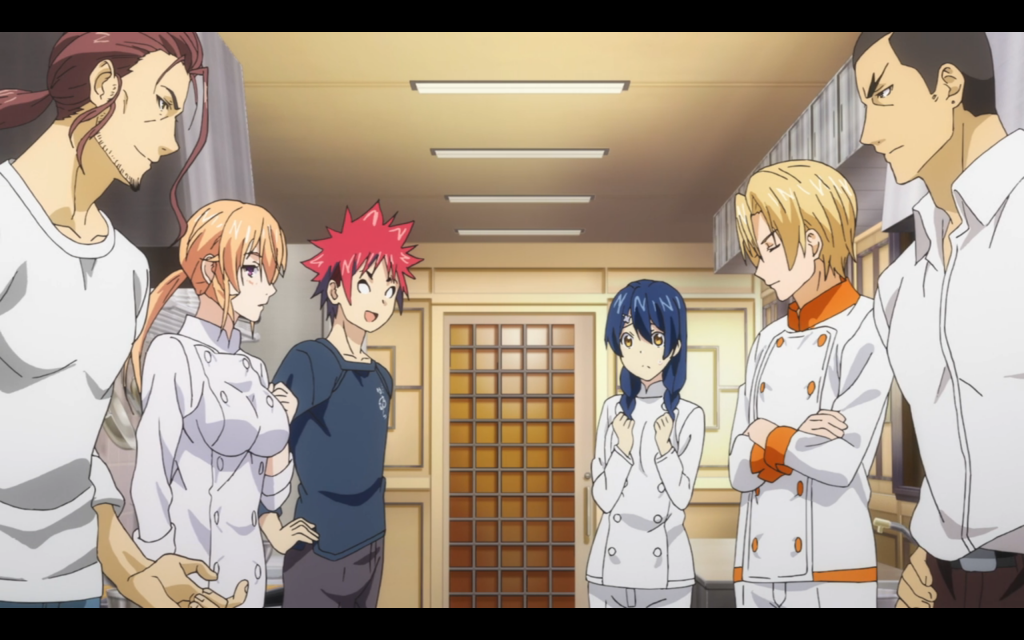 Now all the stuff I’ve been bugged about for a month is starting to make sense. All the bigwigs at Totsuki (including Alice’s Dad, I’ll bet), know that Jouichirou Saiba is somehow The One That Got Away to Azami, and his presence clouds Azami’s judgment. They knew that Azami will be unable to say no to challenge from Saiba, no matter how risky. Rather than fighting Azami outright, the plan has been to go along with him and let him think he won, only for him to hang himself with his own rope when he risks his entire empire on a match with his rival.

Does that really make all of this political craziness worthwhile, when in reality, the Powers that Be at Totsuki could probably have shut Azami down before he began if they really wanted to? Probably not, but hey, at least this whole arc is starting to make sense. It actually makes more sense if you assume that everyone who’s been supporting Azami up to this point secretly hates his guts, and wants to have him almost win just so he can get crushed right before his plan comes to fruition. Why else jump through this many hoops?

One thing I’m not sure of is how much the Elite 10 is in on this; I’m pretty sure Rindou is (I could see her being another secret student of Saiba, actually; that would be a cool little twist, especially because she kind of looks like she could be Soma’s sister), but the others are up in the air. I guess it’s possible they’re all huge snobs and were the only people supporting the Azami administration sincerely. 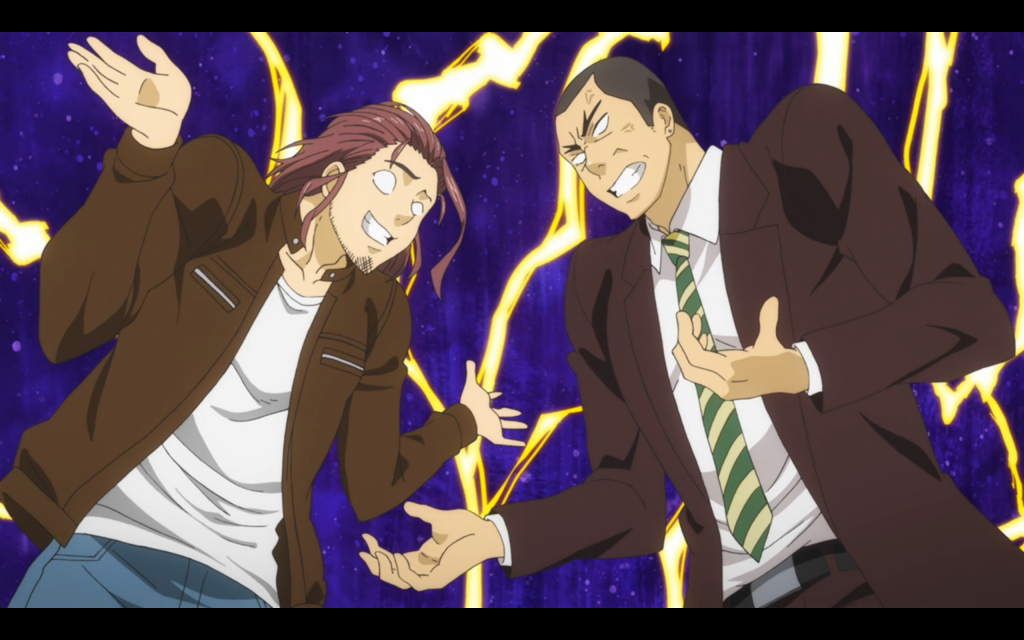 Gin is already beginning to regret the ‘bring in Saiba to take down Azami plan’; it is possible he did not fully think this through.

One interesting little nuance in this episode is that Azami’s old classmates all call him Nakamura, not Nakiri; he married into the Nakiri family, and was not born into it. This is a not-so-subtle dig at Azami’s outsider status, but it’s also interesting when you think of the Magical Nakiri Chest-Bearing gene; maybe that’s what this is all about? As a non-biological Nakiri, Azumi lacks the Chest Bare power, Erina’s Mom felt that he couldn’t measure up to her husband and brother, and he’s been itching to prove his culinary worthiness ever since.

Suddenly I’m imagining the dinner table at Little Erina’s house, where Erina Mommy is like, “The way I was raised, real men bare their chests when they eat something delicious,” and Azami is like “If you love your father so much, maybe you should have married him, Lorraine!” and then Chibi Erina is like “I just want to let you both know this dish has too much thyme, it stings my Divine Tongue.” 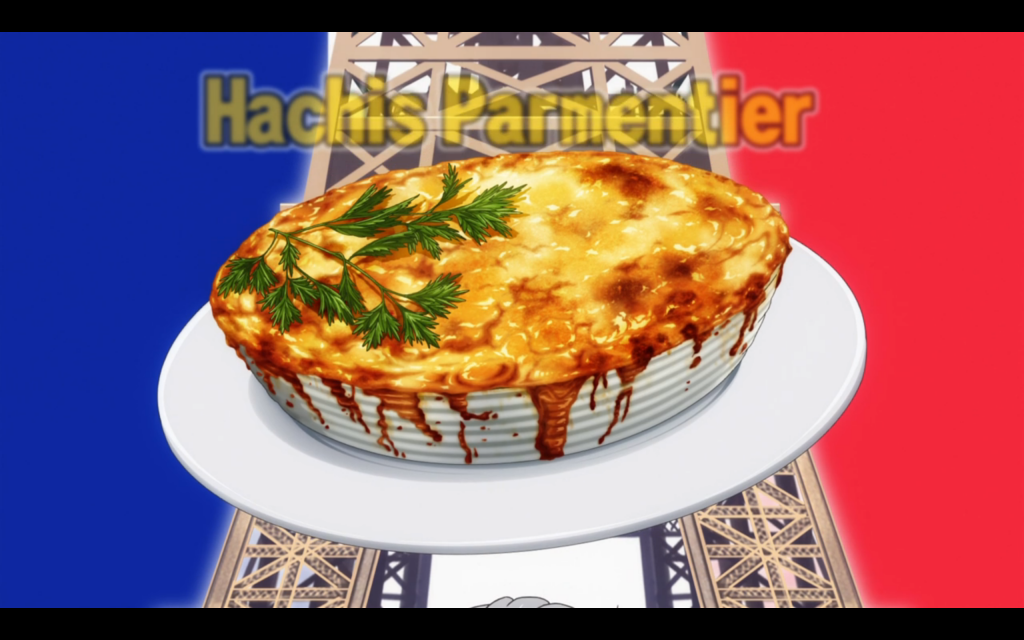 Okay, enough fanfiction about young Erina’s life, time to return to the actual story. The good guys, including Saiba and Gin, are going up against some of the Elite 10 in a team battle, and if they win, they’ll have the power to put an end to Azami’s nonsense. However, since it’s a team battle, teamwork is going to be important for arguably the first time. Soma and Megumi have been working together for a while, but for the most part, the Totsuki way is to focus on individual achievement at the cost of everything else.

What’s interesting is that this isn’t really a case of the old Totsuki way (Grandpa, Saiba, Gin) versus the new Totsuki way (Azami), since succeeding through teamwork has never been the Totsuki way, as far as we know. However, the fact that the format for a Team Shokugeki exists in the first place hints at the idea that Totsuki’s culture might have been more team-oriented in the past, which is interesting. Maybe this whole thing is an extremely roundabout plot by Grandpa to return Totsuki to a warmer, more cooperative time, by necessitating the use of teamwork? Talk about playing the long game.

Oh, and speaking of Grandpa Senzaemon, we learn in this episode that Soma ended up attending Totsuki Academy in the first place because he pushed for it, over Saiba’s objections. Considering how much Grandpa cares about Erina’s wellbeing, I wonder if he foresaw that Soma’s presence would help Erina overcome her father’s toxic influence? Yup, I think it’s safe to say that Grandpa is playing 4D chess at this point. 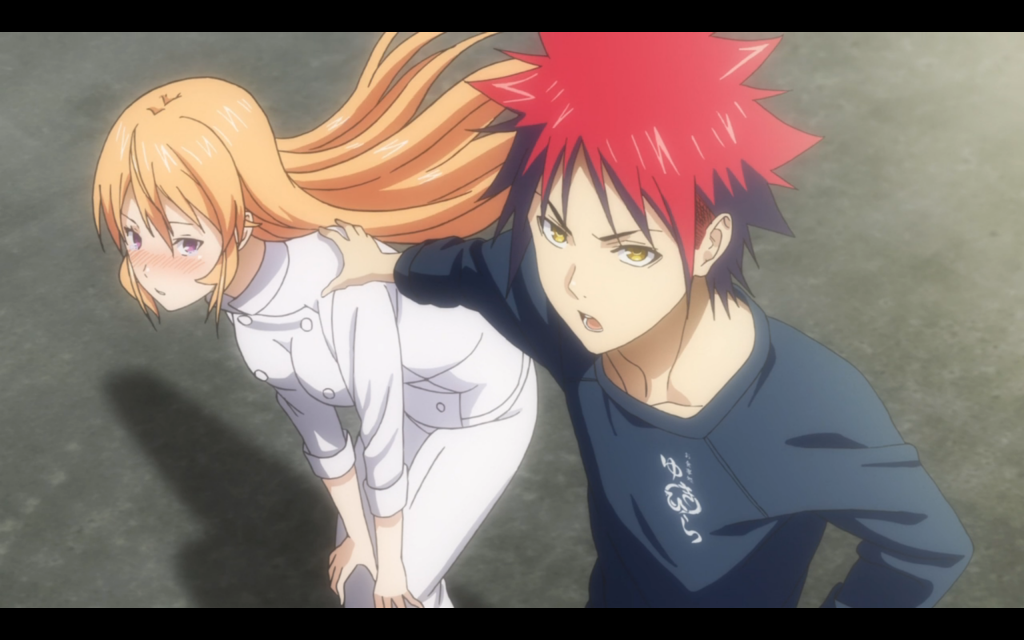 “Don’t worry Erina, I am here for you, just like your Grandpa planned; also, my Dad is about to show up in five seconds, also according to your Grandpa’s plan. Your Gramps has it covered, is basically what I’m saying here.”

Naturally we need some training matches before we get the Amazing Battle Royale Team Shokugeki, so the rebels are broken up into teams and tasked with making a classic French dish. At first the teams seem sort of stacked with Soma, Erina and Saiba all on the same team, but of course father and son are much too alike to possibly get along, so their chances look grim. This is going to be about headstrong personalities learning how to work together, which isn’t the most original thing in the world, but appropriate for this point in the series; after all, a chef is supposed to be a leader of a team of cooks. He’s not supposed to be in the kitchen by himself, which is mostly what the series has been about until now. 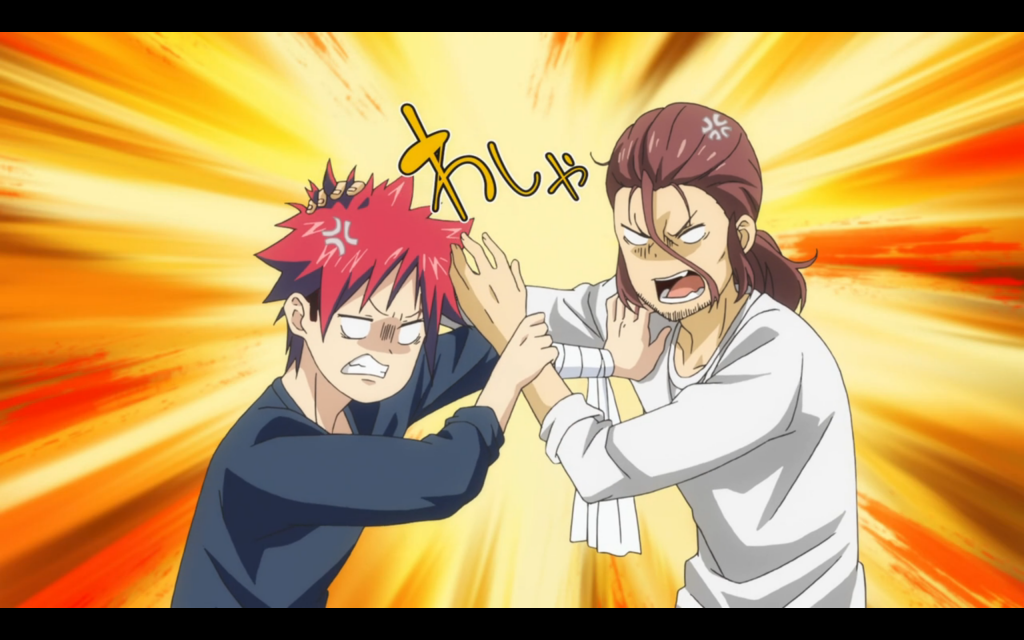 Huh. You know, one way of looking at this arc is it’s about the kids making the transition from talented cooks (people who can make delicious dishes using traditional techniques) to chefs, people who can lead a kitchen as a coordinated unit. It’s a really obvious theme for a story about culinary education, but it kind of snuck up on me from left field, and I have to give the show props for that. Another way of looking at this arc is that it’s about fatherhood, with Saiba’s laissez-faire parenting contrasted with Azami’s controlling nature. But I think there will be more to say about that once we finally get the backstory between Azami and Saiba, and I think I’ve gone on just about long enough about this episode, so I’ll wrap up here. 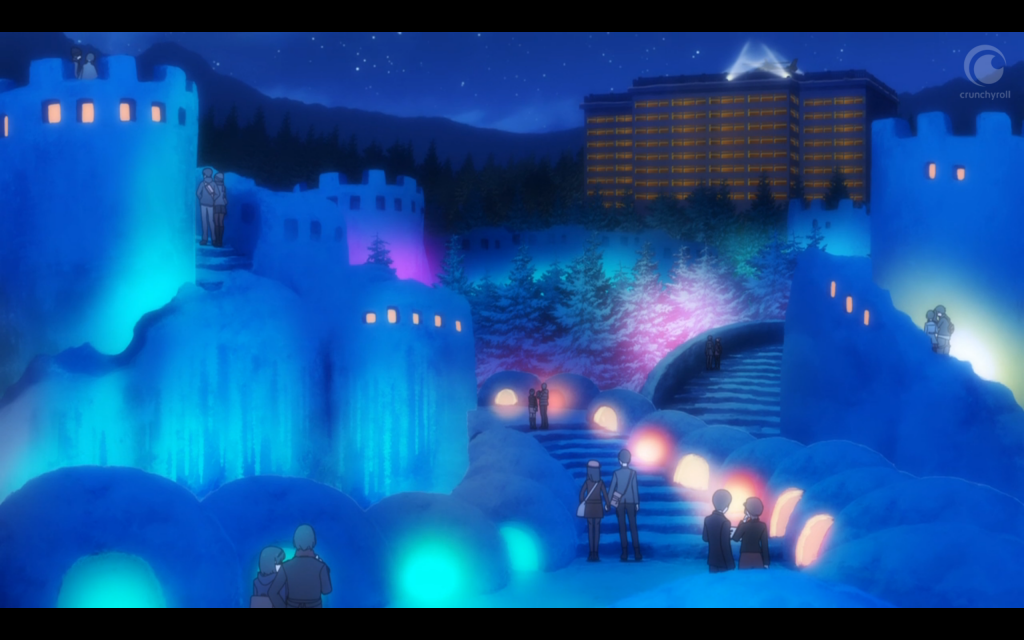 Buildings made of ice and snow? Are you telling me they have Ice Hotels in Hokkaido? I thought they were only in Sweden and Quebec! Do a Shokugeki inside an Ice Hotel! Do it! DO IT!